ABSTRACT: The purpose of this research was to develop mouth dissolve tablets of Hydrochlorothiazide and Ramipril, were prepared by direct compression technique. Ramipril is an Angiotensin Converting Enzyme (ACE) inhibitor. It is an inactive prodrug that is converted to ramiprilat in the liver, the main site of activation, and kidneys. Thiazides such as hydrochlorothiazide promote water loss from the body (diuretics). They inhibit Sodium and Chlorine (Na+ and Cl-) reabsorption from the distal convoluted tubules in the kidneys. The tablets were prepared using microcrystalline cellulose and dicalcium phosphate as diluents along with three different levels of disintegrant. The superdisintegrant used in this study were CCS and Maize Starch. The tablets were evaluated for weight variation, hardness, friability, wetting time, water absorption ratio, disintegration time (DT) and dissolution study. Formulation prepared with 30% of CCS showed Disintegration time of 20seconds in vitro. Also the hardness, friability, dissolution rate of prepared tablets (batch F4) was found to be acceptable according to standard limits.

INTRODUCTION:The antihypertensives are a class of drugs that are used to treat hypertension. Evidence suggests that reduction of the blood pressure by 5 mmHg can decrease the risk of stroke by 34%, of ischaemic heart disease by 21%, and reduce the likelihood of dementia, heart failure, and mortality from cardiovascular disease. There are many classes of antihypertensives, which lower blood pressure by different means; among the most important and used in the present study are the thiazide diuretics and the Angiotensin Converting Enzyme (ACE) inhibitors 1-12.

The type of medication to use initially for hypertension has been the subject of several large studies and resulting national guidelines. The fundamental goal of treatment should be the prevention of the important endpoints of hypertension, such as heart attack, stroke and heart failure.

Patient age, associated clinical conditions and end-organ damage play a part in determining dosage and type of medication administered. The several classes of antihypertensive differ in side effect profiles, ability to prevent endpoints, and cost. As of 2009, the best available evidence favors the thiazide diuretics as the first-line treatment of choice for high blood pressure when drugs are necessary. An Angiotensin Converting Enzyme (ACE) inhibitor is recommended by National Institution of Healthcare and Excellence (NICE) in the UK for those under 55 years old 13-28.

Ramipril is an angiotensin-converting enzyme (ACE) inhibitor, used to treat high blood pressure and congestive heart failure. Ramipril is an Angiotensin Converting Enzyme (ACE) inhibitor similar to benazepril, fosinopril and quinapril. It is an inactive prodrug that is converted to ramiprilat in the liver, the main site of activation, and kidneys. Ramiprilat confers blood pressure lowering effects by antagonizing the effect of the Renin-Angiotensin-Aldosterone System (RAAS).

Hydrochlorothiazide, abbreviated HCTZ, HCT, or HZT, is a diuretic drug of the thiazide class that acts by inhibiting the kidneys' ability to retain water. This reduces the volume of the blood, decreasing blood return to the heart and thus cardiac output and, by other mechanisms, is believed to lower peripheral vascular resistance 29-37.

METHODS: Ramipril & Hydrochlorothiazide were prepared by Direct Compression method. All the formulations contained 5 mg of Ramipril and 12.5 mg of Hydrochlorothiazide and by using different superdisintegrants. Various batches prepared shown in Table 1. All the ingredients were passed through 20-mesh sieve separately and collected, finally compressed into tablets after lubrication with magnesium stearate (1.5%) and talc (2.5%) by using 8 mm flat bivel edged punch using RIMEK 8 station tablet compression machine. The mixture was compressed into 50-mg tablets. The prepared tablets were evaluated for various parameters like hardness, friability, wetting time, uniformity of dispersion, disintegration time, and dissolution study.

Evaluation of the granules:

LBD = weight of the powder / volume of the packing

TBD = weight of the powder / tapped volume of the packing

Where: LBD = weight of the powder / volume of the packing

TBD = weight of the powder / tapped volume of the packing

Evaluation of the prepared tablets

Where, Wa and W b are the weight after and before water absorption, respectively.

Physical properties of the formulation: The prepared tablets were evaluated for physical parameters such as, hardness was 3-4 kg/cm2 and friability was observed between 0.36-0.81%, which was below 1% indicating the sufficient mechanical integrity and strength of the prepared tablets (Table 2). Percent weight variation was observed between 1.8 and 3.6, well within the acceptable limit as per USP Wetting time and water absorption ratio was determined using the method described by Bi et al. (Table 2).

The results obtained by evaluating the powder blends of drug and excipients are shown in (Table 3). Values for angle of repose were found in the range of 24 to 27° showing that the blend of powder was free flowing and can be used for direct compression. The value for Carr’s index was less than 1, indicating that all the batches of powder blends were having good compressibility. Lower HR (<1.25) indicates better flow properties than higher ones (>1.25).

Crosscarmellose had less wetting time and minimum water absorption ratio for hydrophilic combination of Ramipril and Hydrochlorothiazide. The disintegration times for formulation F1-F5 was compared (Table 2) that indicates the formulation (F4) containing Crosscarmellose disintegrated the fastest with no mass left and had good hardness. 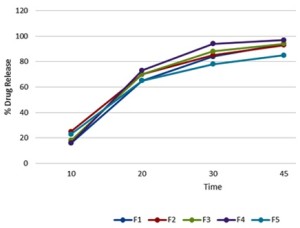 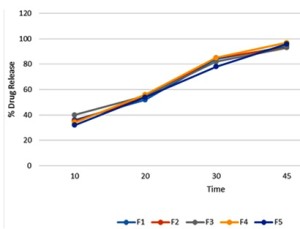 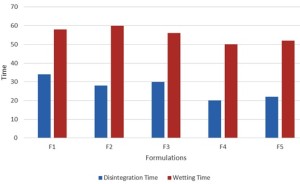 CONCLUSION: Direct compression method can be considered as an important method for the formulation of fast dissolving. Various percentage of the superdisintegrant was also used to get best formulations with high bioavailability. Formulation having the better superdisintegrant will have better in vitro disintegration time and dissolution along with lesser friability and weight variation. The use of superdisintegrants for preparation of fast-dissolving tablet is to get dispersed in the mouth quickly and releases the drug early as compared to its formulated conventional tablet.

Figure 1 & 2 shows the cumulative percentage of ramipril and hydrochlorothiazide tablet with different concentration of CCS and Maize Starch released from formulation. It is clear that the dissolution has improved considerably in formulation F4 as compared to formulation F1, F2, F3, and F5. Thus, it may be concluded that the fast dissolving tablets of Ramipril and Hydro-chlorothiazide can be successfully prepared and undoubtedly the availability of various technologies and manifold advantages of fast dissolving tablets will surely enhance patient compliance and its popularity in the near future.