FORMULATION AND EVALUATION OF HYDROTROPIC SOLID DISPERSION OF ELUXADOLINE

FORMULATION AND EVALUATION OF HYDROTROPIC SOLID DISPERSION OF ELUXADOLINE

ABSTRACT: In the present research, newly developed hydrotropic solid dispersion technique utilizing the use of aqueous solvent was developed, to avoid the utilization of organic solvent and all together declining their toxicity. This technology was employ intended for preparing the dispersion of Eluxadoline by using new hydrotropic agent sodium caprylate with using different ratio. Prepared formulations were evaluated by Solubility study, Fourier transforms infrared spectroscopy, X-Ray Diffractometry, Drug content analysis, and in-vitro drug release study. Based on the evaluation of hydrotropic solid dispersion concluded that the concept or technology of hydrotropic solid dispersion method is a novel, nontoxic and as well cost-eﬀective technique for the rationale of enhancing the aqueous solubility of substance and bioavailability of poorly water-soluble drugs. The improvement within solubility and dissolution of Eluxadoline is a clear sign. It can be able to use in the future for more poorly water-soluble drugs to enhance solubility and also which having low bioavailability is a major problem.

INTRODUCTION: Product development scientists frequently meet significant difficulties in solving the problem of poor water solubility of drug applicant in the growth of pharmaceutical dosage form. A few decades ago, 40% new drug failures in development had been recognized poor biopharmaceutical properties, as well as water insolubility. A solid dispersion of one or more active pharmaceutical ingredients in an inert and nontoxic carrier matrix at solid state by using solvent evaporation method, melting-solvent method, fusion method 1, 2. In 1961, Obi and Sekiguchi developed a useful system whereby numerous of the limits by the bioavailability improvement of low water-soluble drugs can be overcome.

Drugs with having low aqueous solubility will mostly show less dissolution rate, as well as incomplete absorption and drugs with having poor membrane permeability, will exhibit penetration rate-limited absorption.

There are strategies of pharmaceutical study that focuses on improving oral bioavailability of drug are:

Then, prepared solid dispersions can be denoted as HSDs 5. Sodium caprylate act as a hydrotropic agent and use for enhancing the solubility of low aqueous soluble drug 6.

Physical Identification and Melting Point: Physical identification of drug was visually recognized, and the melting point of Eluxadoline was determined by using the capillary method and compared with reference data that is shown in Table 1 11.

Determination of Solubility of Eluxadoline: Solubility study of Eluxadoline was carried in demineralized water, methanol, and water: acetonitrile (50:50). Drug added in the excess amount and slowly to 5 ml of each solvent. Then, solutions shaken on the mechanical shaker on room temperature for 12 h. Solutions were allowed for 24 h for obtained equilibrate. Then, the solutions were transferred into the centrifuge tubes and centrifuged on about 1000 rpm for 5 min and filtered by using filter paper and obtained filtrates were correctly diluted. The prepared diluted solutions analyzed at 243 nm by using a suitable blank solution.

Selection of Ratio of Drug and Carrier in Hydrotropic Solid Dispersion: There was a significant improvement in the solubility of drug-using a sodium caprylate in the ratio of 1:1, 1:2, 1:3, 1:4, 1:5 and 1:6. So that optimized formulation based on solubility. Finally, ratios of the drug: carrier (1:4) used for solid dispersions.

Preparation of Solid Dispersions: For the formulation of solid dispersion, accurately weighed the quantity of the drug was dissolved into the hydrotropic solution and then, stirred on the magnetic stirrer at room temperature for 4 to 6 h. After evaporating of the solvent obtained solid mass was transferred to glass plate. Then, dried in an oven at a temperature of 50 °C for 24 h. After drying, solid mass was crushed and then, triturated using a pestle mortar and then, passed through sieve no # 80 and store in a closed container 12, 13, 14.

FT­IR Study of Pure Drug, Physical Mixture, and Solid Dispersion Preparations: For all the prepared formulations and Eluxadoline, the pellets have been prepared using potassium bromide (KBr) for FT‐IR study. The samples were analyzed in ‘Agilent FTIR spectrometer. IR spectra analyzed which are illustrated in Fig. 4 and 5 15.

Drug Content Analysis: Accurately weighed solid dispersion equivalent to 50 mg of Eluxadoline transferred to 100 ml volumetric flask and dissolved into 6.8 phosphate buffer and made volume with the same solution up to the mark. After suitable dilution, the absorbance of the above sample was measured at 243 nm using 6.8 phosphate buffer as a blank solution and then, by using calibration curve drug content of Eluxadoline was calculated 16, 17.

In-vitro Release Studies: Accurately weighed 50 mg of sample was used for the dissolution study. The sample has been withdrawn by predetermined time intervals and analyzed intended for in-vitro drug release by measuring the absorbance at 243 nm using phosphate buffer pH 6.8 as a medium. The volume was withdrawn at each one-time intervals and replaced by using the same amount of fresh medium.

The results of solubility studies of Eluxadoline are summarized in Table 2. 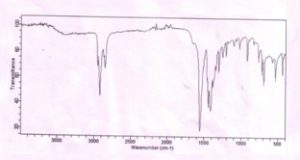 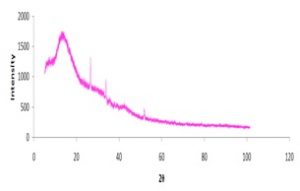 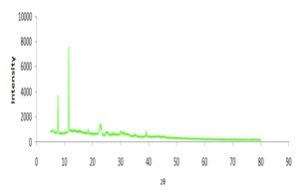 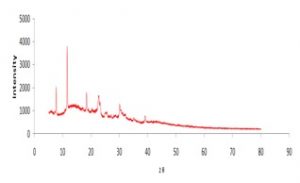 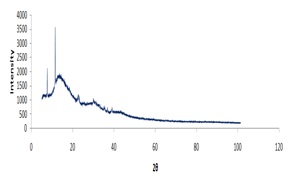 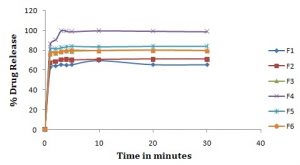 ACKNOWLEDGEMENT: The entire authors are grateful to Torrent pharmaceutical Ltd, Ahmadabad for providing gift samples of Eluxadoline. We thank Mr. Rohit Pipaliya Sr. Executive at TPL, Ahmadabad for permitting drug sample and to DAVV consortium for helping me during my research work.