FORMULATION AND EVALUATION OF IMMEDIATE RELEASE TABLET OF VALSARTAN

FORMULATION AND EVALUATION OF IMMEDIATE RELEASE TABLET OF VALSARTAN

ABSTRACT: The immediate release tablet of antihypertensive drug Valsartan were prepared and evaluated to increase solubility and bioavailability of low soluble drug. The tablets were prepared by direct compression method using Surfactants such as Poloxamer 188, Sodium stearate, Sodium Lauryl Sulfate and Superdisintegrant such as Cross carmellose sodium were used in tablet formulation. The formulation were evaluated for various physical parameters, dissolution study and drug release profile. From all formulations the formulations F-C of batch B 3 i.e SLS-3 showed 98.04% drug release within 30 minutes, which was highest drug release than other batches. The optimized immediate release tablet of batch B 3i.e SLS-3 of formulation F-C showed no change in physical appearance, drug content or in dissolution pattern storage at 40± 20 C / 75 ± 5 % for 90 days. Finally it was concluded that batch B-3 containing formulation F-C i.e. SLS-3 shows highest drug release.

INTRODUCTION: Oral route is most common route of administration of drug because of its systemic effect, patient compliance, less expensive to manufacture. Tablet provides high precision dosing. In most of the cases immediate on set of action is required as compare to conventional therapy. To achieve the rapid onset of action and eliminate the drawbacks of conventional therapy immediate release dosage form is now a days popular oral dosage form. Basic approach used in development is the use of superdisintegrants which provide rapid disintegration of tablet after administration 1. This research work is concerned with the formulation and evaluation of immediate release tablet of Valsartan in order to provide immediate relief from hypertension.

A solubility and dissolution are the key parameters for the therapeutic effect of a drug. Solubility is one of the important parameter to achieve desire concentration of drug in systemic circulation for pharmacological response 2. More than 92% of the drug listed in U.S. pharmacopoeia which are having low solubility. It is commonly recognized in the pharmaceutical industry that on average more than 40% of newly discovered drug candidates are having poor solubility. Micronization, Nanonization, salt formation, use of surfactants, solid dispersion are the several methods for enhancement of solubility of the drugs 3, 4, 5.

bioavailability, lower clearance and lower elimination half -life. But main criterion for immediate release dosage form is poor solubility of the drug and need the immediate action of drug 8. Valsartan is a new potent, highly selective and orally active antihypertensive drug belonging to the family of angiotensin II type 1 receptor antagonists Valsartan has much greater affinity (about 20000 fold) for the angiotensin II type 1 (AT1) receptor than for the angiotensin II type 2 (AT2) receptor, thereby relaxing blood vessels and causing them to widen, which lowers blood pressure and improves blood flow 9.

Valsartan is rapidly absorbed after oral administration. The bioavailability is 10-35 %. Food affects it’s absorption by 40% and peak plasma concentration by about 50% .Valsartan has extensive Plasma protein bound i.e 94-97 % and hence limited distribution outside plasma compartment. Because of presence of carboxylic groups Valsartan is soluble in neutral pH range and is present in ionized form at physiologic pH.  The volume of distribution at steady state is 17 L. Valsartan does not require any metabolism in the body to become active 10.

The recommended adult dose of Valsartan is 80 mg or 160 mg once daily 11. Direct compression method was preferred to prepare the tablet as it was proved to be most convenient one over other manufacturing process to formulate immediate release drug using disintegrating agent 12. The basic aim of present study was to Formulate and Evaluate Immediate Release tablet of Valsartan to achieve maximum solubility by using Surfactants such as Poloxamer 188, Sodium Lauryl Sulfate, Sodium Stearate and to decrease Disintegration time by using Superdisintegrants Cross Carmellose Sodium. Thus ultimately it helps to enhance the bioavailability of poorly soluble Valsartan.

The powder blends were evaluated for the properties such as Bulk density, Tapped density, Carr’s Index, Hausner’s ratio, Angle of repose. Finally the blends from each formulation were compressed by using 10 mm punch in 8 station single rotary compression machine and tablets were prepared. The composition of different formulations of immediate release tablet is shown in Table 1.

TABLE 1: Composition for preparation of immediate release tablet of valsartan

Evaluation of Valsartan Immediate release tablets: The tablets were subjected to evaluation for the following parameters.

Friability test was performed by taking 20 tablets. Pre weight of the individual tablet was taken before subjecting to friability test. Weighed tablet samples are transformed into friabilator and subjected to combined effects of abrasion and shock by revolving at 25rpm for 4min for 100revolutions. Samples are withdrawn after set time completions and loose dust powder was removed from the tablet and final weight is noted and substituted in the formulae.

The thickness of tablets was determined using Digital Vernier Caliper. It is expressed in mm.

The Valsartan content in tablets was determined by powdering 10 tablets in each batch. Powder equivalent to 100 mg of Valsartan was dissolved in Methanol. 1 ml of filtrate wasfurther diluted to 100 ml with 0.1 N HCL and it was determined by spectroscopy at 250 nm.

Drug release studies were done by using USP type II apparatus (paddle type).For that 900ml of dissolution medium (0.1N HCl) was transferred into round bottomed beaker and the temperature was maintained at 37⁰c±2⁰c and Speed of Paddlewas 50rpm. At regular time interval (5min.) 5ml sample was withdrawn and replaced with fresh dissolution medium. Removed sampled was diluted and observed in UV spectrophotometer at 250 nm

The Precompression parameters were the primary requirements to determine whether the specific material was suitable for the targeted formulation or not.  The aim was to formulate the tablet formulation with direct compression method, so it was mandatory to known the bulk density, tapped density, Carr’s index, Hausner’s ratio and angle of repose as those were the official requirement while choosing any material for its dosage form formulation. Table 2 shows the results evaluated parameters of Bulk Density, Tapped Density, Carr’s index, Hausner’s ratio, Angle of Repose for various tablet formulation. The result of evaluation parameters clearly indicates its suitability to be the material of choice for formulation. 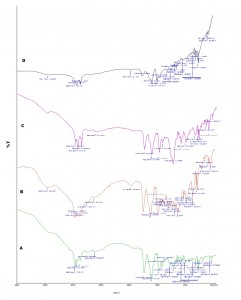 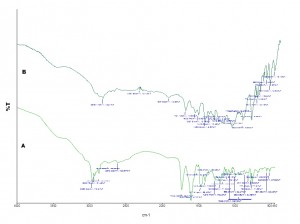 A: FTIR SPECTRUM OF VALSARTAN

B: FTIR SPECTRUM OF OPTIMIZED BATCH B 3 (FORMULATION F-C i.e.SLS-3)

In-vitro drug release studies of the prepared formulations were carried out by using 900 ml of 0.1N HCl standard dissolution medium. The % drug release were calculated by with-drawing the samples from the experimental medium and recording the absorbance from UV-Spectrophotometer at definite time interval such as after 5, 10, 15, 20, 25 and 30 minutes interval. The observed result were reported below in the Table 4. Systematically for comparisons of % drug release and it was observed after 30 minutes all the batches shows good release profile as per the reported specification. As formulation F-C i.e. SLS-3 of batch B 3 shows highest release % after 30 minutes so it may be considered as an important criteria to be chosen it as optimized batch if other parameters shows encouraging results like in-vitro drug release. In- vitro release data was applied to various kinetic models to predict the drug release kinetic mechanism (Table 5). The kinetic models used were zero order, first order, Higuchi and Peppas. The results of mathematical model fitting of data obtained indicated that, the best fit model in all the cases the release was found to be by zero order kinetic for optimized formulation F-C i.e. SLS-3 of batch B 3. Thus the release of the drug from the dosage form was found to be zero order kinetic release containing formulation F-C i.e. SLS-3 of batch B 3. 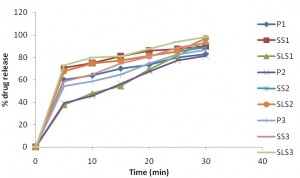 Table 5: Data of various parameters of model fitting for Optimized formulationsF-C i.e. SLS-3 of batch B 3. 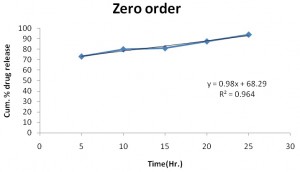 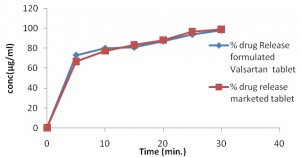 CONCLUSION: The present study was aimed at developing immediate release tablet of valsartan by using combination of surfactants such as Poloxamer188, Sodium Lauryl Sulfate, Sodium stearate and other polymer such as Cross carmellose sodium, Avicel pH102, Lactose monohydrate, Talc by using direct compression technique. The immediate release tablets were evaluated for physicochemical parameter like thickness, hardness, weight variation, friability and in-vitro drug release. The in-vitro drug release study were found that optimized formulation F-C i.e.SLS-3 of batch B 3 show immediate drug release within 30 minutes up to 98.04%.