ABSTRACT: The study was undertaken with an aim to formulate anti-hypertensive agents as sustained release matrix tablets. The literature review showed that Indapamide is an anti hypertensive / diuretics in SR dosage form 50% of drug is released between 5-14hrs and 20-80ng/ml blood level is obtained for 24 hrs and SR form permits uniform and constant blood level after absorption of galenic form by oral route up to now it is available as IR with an dose of 2.5mg/day which results in considerable blood peaks, it is formulated as SR form  to avoid and maintain constant blood level and to maintain better theraupetic index. In the present study, HPMC was found to play a great role in controlling release of drug Indapamide from the matrix system. Incorporation of HPMC K 100 M CR as release controlling polymer in extra granular fraction was found helpful in restoring the original and still closer release profile.

Indapamide is an extensively metabolized drug with only about 7% of the total dose administered, recovered in the urine a pharmacokinetic s unchanged drug during the first 48 hours after administration. The urinary pharmacokinetic elimination of 14C-labeled Indapamide and metabolites is biphasic with a terminal half-life of excretion of total radioactivity of 26 hours.

In a parallel design double-blind, placebo controlled trial in hypertension, daily doses of indapamide between 1.25 mg and 10 mg produced dose-related antihypertensive effects. Doses of 5 and 10 mg were not distinguishable from each other although each was differentiated from placebo and 1.25 mg Indapamide. At daily doses of 1.25 mg, 5 mg and 10 mg, a mean decrease of serum potassium of 0.28, 0. 61 and 0.76 mEq/ L, respectively, were observed and uric acid increased by about 0.69 mg/100 ml 6, 7, 8.

Characterization of the tablets:

Sample preparation: Transfer 6 tablets individually in six dissolution flasks containing 900ml of the medium that has been equilibrated to 37oC + 0.5oC. Take care to exclude air bubbles from the surface of the tablets, start the apparatus immediately. Collect the sample after the specified time, withdraw sample from a zone midway between the surface of the medium and top of the rotating blade and not less than 1cm from the vessel wall and filter through 0.45μ membrane filter by discarding the 5ml.

Procedure: Separately inject the standard preparation into the liquid chromatography and record the area due to major peaks.

Based on the preformulation data, HPMC K100M was taken as release controlling polymer, mannitol and MCC114 as diluents, HPC-LF as binder, aerosil as glidant, zinc stearate as lubricant.

In Trial 1, HPMC K100M was used as release controlling polymer and mannitol as diluent, this trail is taken to check various problems in processing of tablets, the tyablets which are processed passed all the in process quality control tests (thickness, friability, hardness, weight variation,). But the flow  of dried granules should be improved and  compressibility of granules also to be improved.

In Trial 2, Mannitol and MCC114 are combinedly used as diluents to increase flow and compressibility of dried granules, and HPMC K (4M,15M,100M,) are used as release controlling polymer to check for their  release profile, the tablets with HPMC K100M are showing retarded release.

In Trial 5, 6 HPMC K 100 M taken as release controlling polymer in (60%, 70%,) concentration to check  for there release profile, tablets showing release profile similar to that of innovator product but  during processing of tablets hard granules are formed which are very difficult to mill and sift. So the process to be optimized.

In Trial 7, binding solution water was replaced with alcohol and water in ratio of (9:1) respectively, no hard granules are observed but tablets dissolved totally in 0.1 N Hcl with in 1hour.

In Trial 8, HPMC K100M (CR) is taken as release controlling polymer and used in extra granulation part, the granules which are formed are soft and no difficulties observed in sifting, the tablets showing release profile is 98%. 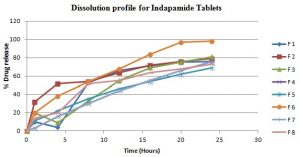 SUMMARY AND CONCLUSION: In the present study, HPMC was found to play a great role in controlling release of drug indapamide from the matrix system. Incorporation of HPMC K 100 M CR as release controlling polymer in extra granular fraction was found helpful in restoring the original and still closer release profile. Preformulation study and drug excipients compatibility study was done initially and results directed the further course of formulation. With the data from literature review, Preformulation and Excipients compatibility study Prototype formulation trials were started. Wet granulation process was used for both the layers formulation by using the RMG Granules were evaluated for tests such as LOD, Bulk density, Tapped density, Compressibility Index and Hausner ratio & sieve analysis before being punched as tablets. Tablets were tested for weight variation, thickness, hardness and friability, In-vitro dissolution tests were performed and f2 values were calculated. Dissolution profile matched with innovators product and f2 value was satisfactory. Accordingly, it can be concluded that the final formulation is a robust one and the performance is less likely to be affected by the various factors studied. An excellent in vitro –in vivo correlation is expected as evident from degree of similarity found in gradient dissolution in different media and release kinetics with respect to the reference listed drug products and as comparing with the commercial drugs also shows good dissolution studies.

ACKNOWLEDGEMENT: The authors are thankful to Dr. Mir Wajahath Ali, Convener MESCO College of Pharmacy for his constant encouragement and kind support.