ABSTRACT: The purpose of research work was to develop and optimize mucoadhesive microspheres of levocetirizine for nasal delivery with the aim to enhance the residence time and improve therapeutic efficacy and at the same time increase the Local  absorption of drug and reducing systemic side effects and also to develop unique delivery system for patients suffering from allergy and rhinitis. Chitosan (mucoadhesive) based microspheres of levocetirizine were prepared by emulsification-crosslinking method. Glutaraldehyde was used as crosslinking agent. The mean particle size was significantly increased when high concentration of chitosan was used. Aqueous to oil phase ratio, stirring rate and dioctyl sodium sulfosuccinate (DOSS) concentration also influenced the particle size distribution of the microspheres.  Microspheres were evaluated with respect to the production yield, particle size, entrapment efficiency, swelling index, FT-IR, in vitro mucoadhesion, % cumulative drug release, histological study and stability studies. Formulation Lf3 was found to be optimized. The optimized formulation Lf3 was mucoadhesive in nature which adhere onto the mucus and increase the residence time within the nasal cavity.

INTRODUCTION: The nose is considered as an attractive route for needle-free vaccination and for systemic drug delivery, especially when rapid absorption and effect are desired. In addition, nasal delivery may help address issues related to poor bioavailability, slow absorption, drug degradation, and adverse events in the gastrointestinal tract and avoids the first-pass metabolism in the liver. However, when considering nasal delivery devices and mechanisms, it is important to keep in mind that the prime purpose of the nasal airway is to protect the delicate lungs from hazardous exposures, not to serve as a delivery route for drugs and vaccines.

Nasal drug delivery possesses various advantages as a site for drug delivery, such as it provides much vascularized epithelium, large surface area for drug absorption, lower enzymatic activity compared with the gastrointestinal tract and liver and the direct drug transport into the systemic circulation, thereby avoiding hepatic first pass metabolism and irritation of gastrointestinal membrane 1. Nasal route is non-invasive therefore, reduced risk of infection, ease of convenience and self-medication resulting in improved patient compliance. The range of compounds investigated for possible nasal application greatly from very lipophilic drugs to polar, hydrophilic molecules including peptides and proteins 2.

In nasal drug delivery, the most important limitation factor is rapid mucociliary clearance, which is the cause of a limited contact period allowed for drug absorption through the nasal mucosa. Thus, mucoadhesive nano and micro-particles have been formulated to overcome the rapid mucociliary clearance, thereby increasing drug absorption through nasal cavity. Chitosan is a natural polymer that has mucoadhesive properties because of its positive charges at neutral pH, which enable an ionic interaction with the negative charges of sialic acid residues on the mucus 3. This highly mucoadhesive characteristics of chitosan provide a longer contact period for drug transport through nasal mucosa and prevents the clearance of the formulation via mucociliary clearance mechanism 4. Therefore, chitosan microspheres have been extensively evaluated as a drug delivery system. In this study, we aimed to formulate levocetirizine-loaded mucoadhesive microspheres with chitosan and to investigate feasibility of levocetirizine nasal delivery with chitosan microspheres.

Levocetirizine is a third generation antihistamine acts by blocking histamine receptor. Which is used in the treatment of allergy & rhinitis5? It is generally given by oral route. However sometimes its oral route which makes oral treatment unsatisfactory. Intranasal route may be viable alternative for self-administration where the limitations of oral and parenteral route could be overcome. Conventional dosage forms may be unsatisfactory due to their poor residence time in nasal cavity. Mucoadhesive polymer like chitosan can be employed to increase the residence time of the formulation to enhance the bioavailability 6.

Chitosan microspheres have received considerable attention as nasal drug delivery systems. Chitosan, being biodegradable, biocompatible, and non-toxic and bioadhesive polymer. Chitosan is a cationic polysaccharide, derived by the deacetylation of chitin. Chitosan is positively charged due to its amino group and able to interact strongly with the negatively charged mucus layer of the nasal epithelium 7.

This is to provide a longer contact time for drug transport across the nasal membrane, before the formulation is cleared by the mucociliary clearance mechanism. In addition, chitosan has been shown to increase the paracellular transport of polar drugs by transiently opening the tight junctions between the epithelial cells. In the present study chitosan microspheres intended for nasal delivery of levocetirizine were prepared by emulsification crosslinking technique using glutaraldehyde (GLA) as the crosslinking agent 8, 9, 10. Hence, in the present work, an attempt was made to formulate and evaluate mucoadhesive microspheres of levocetirizine that will increase residence time in the nasal cavity and at the same time increase the local of absorption of drug and reducing systemic side effects and also to develop unique controlled delivery system for patients suffering from allergy and rhinitis. The microspheres were prepared by emulsion cross linking method in different ratio by using mucoadhesive polymer, chitosan.

Levocetirizine was received as a kind gift from Ajenta Pharma Ltd. (Mumbai, India). Chitosan was provided by Fisher scientific, Mumbai, India. All other ingredients used were of analytical grade and were used without further purification. Spectrophotometric studies were carried out by using double-beam UV-spectrophotometer, Shimadzu, Pharma Spec 1700, Kyoto, Japan.

Chitosan microspheres were prepared by simple w/o emulsification-cross linking process using liquid paraffin (heavy and light 1:1) as external Phase6. Briefly, chitosan was dissolved in 2% aqueous acetic acid solution by continuously stirring until a homogeneous solution was obtained (Table 1). Specified quantity of drug dispersed homogeneously by stirring in chitosan solution. This solution was added slowly to liquid paraffin (heavy and light 1:1) containing 0.2% (w/v) of DOSS as stabilizing agent under constant stirring at 1200 rpm-1375 rpm speed for 15 min using a Eurostar (IKA Labortechnik, Germany) high speed stirrer. To this w/o emulsion, Glutaraldehyde (GLA) was added slowly in definite concentration (2 ml) in different formulation and stirring was continued for 2 hrs. The hardened microspheres were separated by vacuum filtration and washed several time with hexane to remove oil. Finally, microspheres were washed with distilled water to remove unreacted GLA. The microspheres were dried for 24 hrs and then stored in vacuum desiccators until further use.

The production yield of microspheres of various formulation were calculated using the weight of final product after drying with respect to the initial total weight of the drug and polymer used for preparation of microspheres.

Accurately weighed equivalent to 5 mg of levocetirizine microspheres were crushed and dissolved in 100 ml methanol with the help of ultrasonic stirrer and kept overnight The Solution was filtered through Whatmann filter paper No.41, suitable dilution (6,8,10 mcg/ml). The samples were assayed for drug content by UV- spectrophotometer at 231.1nm. The drug entrapment efficiency was calculated using following Equations (1).

The surface morphology of optimized formulation (Lf3) was examined by scanning electron microscopy (JSM 6390, India). The images were recorded at the 100X magnification at the acceleration voltage of 10 kv14.

Levocetirizine, Chitosan and optimized formulation (Lf3) was examined using FTIR Spectrophotometer (Shimadzu FTIR-8400S Kyoto, Japan). The test sample diluted with KBr to get a final dilution of 1:10 was mounted into the instrument. The measurements were made in transmittance mode in the range of 400-4000 cm-1 against the background spectra of pure KBr by setting resolution of 4 cm-1 and 50 times accumulation 15.

The swelling ability of microspheres was determined by allowing them to swell to their equilibrium in phosphate buffer of pH 6.416, 17. Swelling was determined in triplicate by using the equation 2.

The drug release study was performed using USP XXIV basket apparatus at 37°C ± 0.5°C at 50 rpm using 900 mL of phosphate buffer (pH 6.4) as a dissolution medium as per USP XXVI dissolution. Microspheres equivalent to 5 mg of levocetirizine drug were used for the test. Five milliliters of sample solution was withdrawn at predetermined time intervals, filtered through a Whatmann filter paper, diluted suitably and analyzed spectrophotometrically19, 20, 21. An equal amount of fresh dissolution medium was replaced immediately after with drawl of the test sample. Percentage drug dissolved at different time intervals was calculated at 230.1 nm.

Kinetic analysis was performed and the data was evaluated after fitting to Zero order, First order,  Higuchi, Peppas values observed where Regression co-efficient (R) and Diffusion exponent (n) value in case of Peppas model. Criteria for selecting most appropriate model were based on best reliability of fit indicated by ‘R’ value nearer to one. When drug release is concentration dependent, first order model is an indicator. Zero order model is independent of concentration of drug. Matrix model is applicable when matrix polymer is used and Peppas model is used when release mechanism is not well known Fickian diffusion exists when n<0.5, but at n>0.5 non-fickian diffusion mechanism was observed 22, 23, 24, 25

Histological studies were conducted to determine the effect of formulation on nasal mucosa. Nasal mucosa of Goat was obtained from slaughter house in saline phosphate buffer pH 6.4.The mucosa was kept in 10% formalin solution for stabilize the mucosa. Three pieces of nasal mucosa of identical size were cut and mounted on separate glass slide. On one slide was trated with0.5ml phosphate buffer pH 6.4(negative contol) Second slide treated with 0.5 ml isopropyl alcohol(positive control), in third slide slide formulation Lf3(control) and all the slide kept for for 6 h. After 6 h slides were subjected to histopathology study for evaluation of nasal toxicity 3, 26, 27. The specimens were visualized through Microscope at 100 x magnification at Pt. Deen Dayal Upadhaya Pashu Chikitsa Vigyan Vishwavidyalya and Gau research center Mathura, India.

The optimized formulation Lf3 was tested for stability studies. The formulations were divided into 3 sets of sample and stored at 4±1˚C, 25±2˚C and 60±5% RH, 37±2˚C and 65±5%RH 28, 29.  After one to six month, the drug release of selected formulations was determined by the method discussed previously in vitro drug release studies and percentage entrapment efficiency was also carried out for the same formulation.

In the present study, Emulsification-cross linking method described here approved a suitable and simple technique to prepare chitosan microspheres loaded with levocetirizine. For preparation of W/O type of emulsion, polar organic solvent was employed as ‘aqueous phase’. 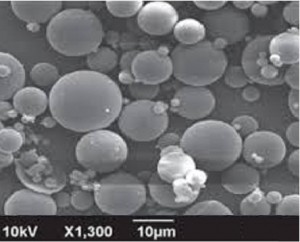 FTIR spectroscopy to know any possible interaction between levocetirizine, chitosan and the crosslinking agent. Levocetirizine and chitosan showed characteristic peak at range of 400-4000 cm-1. The FTIR spectrum of chitosan in Fig. 2 showed peaks corresponding to O‐H stretching at 3428 cm‐ 1 and amine group (NH2) stretching at 2958.1 cm‐1 respectively. The spectrum of drug loaded microspheres denotes that the drug was intact in the formulation and the absence of drug-polymer interaction. Changes in the intensity of the peaks indicating no interaction between drug and polymer. 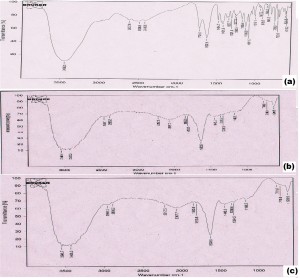 The swelling index of all formulation was shown in Table 2. From the table, degree of swelling for chitosan microspheres varied from 0.623±0.008 to 1.08±0.076.  It is known that the degree of swelling increases marginally as the concentration of mucoadhesive polymer increases. Marginal decrease in swelling at lower level of mucoadhesive polymer may be due to the higher level of film forming polymer (chitosan) in those formulations which allows lesser penetration of water inside the polymer matrix. From this, it may be concluded that when the microspheres are in contact with mucus layer, they swell rapidly and take up liquid from the mucus layer, Hence, the epithelial cells loose water and shrink which opens the epithelial tight junctions allowing drug to be absorbed. 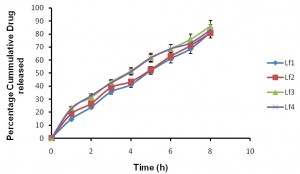 TABLE 4: REGRESSION CO-EFFICIENT (R) VALUES IN THE ANALYSIS OF RELEASE DATA OF MICROSPHERES AS PER VARIOUS KINETICS MODEL AND DIFFUSION EXPONENT (N) VALUE OF PEPPAS EQUATION 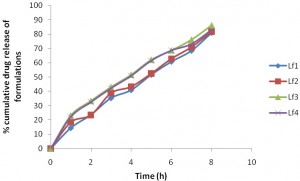 CONCLUSION: In the present studies, it can be concluded that Levocetirizine microspheres based on chitosan prepared by emulsification cross linking method may be considered a promising nasal delivery. Thus, the formulated microsphere seems to be potential candidate as intranasal controlled drug delivery system for the treatment of allergy & rhinitis.