INTRODUCTION: Self - emulsifying drug delivery system (SEDDS) is an isotropic mixture of oil, surfactant and/or co-surfactant that improve the absorption of drugs in gastrointestinal tract and solve the solubility problems. SMEDDS is defined as isotropic mixture of natural or synthetic oils, solid or liquid surfactants and hydrophilic co solvents/surfactants that have unique ability of forming fine oil in water (o/w) micro emulsion upon mild agitation followed by dilution in aqueous media such as in GI fluid 1. Oral drug delivery systems also being the most cost-effective to manufacture, have always lead the worldwide drug delivery market.

This oral route may be a problem route for drug molecules which exhibit poor aqueous solubility 2. SEDDS have been shown to be reasonably successful in improving the oral bioavailability of poorly water-soluble and lipophilic drugs. Traditional preparation of SEDDS involves dissolution of drugs in oils and their blending with suitable solubilizing agents. However, SEDDS formulations are normally prepared as liquids that produce some disadvantages, for example, high production costs, low stability and portability, low drug loading and few choices of dosage forms.

Irreversible drugs/excipients precipitation may also be problematic 3. Self- micron emulsifying drug delivery systems (SMEDDS) are mixtures of oils, co-solvents and surfactants, which isotropic in nature and which emulsify spontaneously to produce fine oil-in-water emulsions when introduced into aqueous phase under gentle agitation.

After oral administration, these systems form fine emulsions (or microemulsion) in gastro-intestinal tract (GIT) with mild agitation provided by gastric mobility and it has a droplet size between 10 - 200 nm, transparent than those of conventional emulsions (1 - 20 μm) which is opaque as shown.

Solid dispersion technique has often proved to be the most commonly used in improving dissolution and bioavailability of poorly soluble active pharmaceutical ingredients because it is simple economic and advantageous. In solid dispersion technique water soluble carriers are used to improve dissolution characteristics of poorly water soluble drugs. Eprosartan is a non-peptide angiotensin-II receptor antagonist approved in more than 20 countries (e.g. US, UK, Germany) for the treatment of patients with hypertension. The drug is orally active and has a distinct non-biphenyl, non-tetrazol chemical structure. Pharma-cokinetic studies of Eprosartan have been conducted in healthy volunteers, patients with hypertension and in special patient populations. Eprosartan plasma concentrations peak at 1 to 3 hours after an oral dose in the fasted state. Administering eprosartan with food delays absorption and causes variable changes (< 25%) in Cmax and AUC values which do not appear clinically important.

Plasma concentrations of Eprosartan increase in a slightly less than dose-proportional manner over the 100 mg to 800 mg dose range. The mean terminal elimination half-life of Eprosartan following multiple oral doses of 600 mg was approximately 20 h. Absolute oral bioavailability was calculated to be approximately 13% in a study of 17 healthy volunteers who received the commercially available oral tablet as well as an intravenous formulation of Eprosartan tract. The low oral bioavailability of Eprosartan may be the result of incomplete absorption due the physicochemical properties of the drug. Eprosartan exhibits pH-dependent aqueous solubility and lipophilicity which may result in variable absorption as the compound passes through the gastrointestinal tract. Because the variable and mean absolute bioavailability of Eprosartan is only 13% doses as high as 800 mg per day may be required for an effective treatment of hypertension, congestive heart failure and renal failure.

Additionally, since the commercial form of the drug is its mesylate salt, high dose tablets (e.g., 600 mg tablets weigh 1,000 mg) may be difficult to swallow. The oral bioavailability of Eprosartan is limited by the solubility, rather than the metabolism within cytochrome P450 in the liver. Therefore, there is a need for a formulation that enhances the bioavailability of eprosartan. Eprosartan mesylate is Monomethane sulfonate of 4-({2-butyl-5-[2-carboxy- 2- (thiophen- 2- ylmethyl) eth-1-en-1-yl] -1H-imidazol-1-yl} methyl) benzoic acid. It is white fine powder having poor aqueous solubility. The present study is an attempt to overcome the poor aqueous solubility of Eprosartan by solid dispersion technique using skimmed milk powder (SMP) as carrier 4.

Materials: Eprosartan Mesylate is obtained as a gift sample from Matrix Laboratories, Nasik. Sesame oil, PEG-400, Tween 80, and Aerosil-200 was purchased from Research Lab Fine-Chemical Industries, Mumbai. All other chemicals used were of AR Grade.

Solubility Studies: The solubility of Eprosartan mesylate in various vehicles including oils, surfactants and co-solvents was determined by the shake flask method 5. An excess amount of Eprosartan mesylate was added to each vial containing 1 ml of the vehicle. After sealing, the mixture was vortexes using a vortex mixture at maximum speed for 10 min in order to facilitate proper mixing of Eprosartan mesylate with the vehicle. Mixture was then shaken in an orbital shaker maintained at room temperature until equilibrium (24 h). Mixture was centrifuged at 5000 rpm for 5 min and the resulting supernatant was filtered through a Whatmann filter paper. The filtrate was quantified by the developed HPLC method 6. The mobile phase was acetonitrile 100% at a flow rate of 0.9 ml/min. The wavelength used for detection was 210 nm. A calibration curve was constructed from Eprosartan Mesylate concen-tration ranging between 5 and 250 µ/ml, which yielded a linear correlation (r2 = 0.995).

Emulsification Studies: Emulsification studies were conducted to select the best surfactant and co-solvent from a range of co-solvents from a range of co-solvents and surfactants that are used for oral drug delivery. The surfactant and co-solvents were mixed at a fixed ratio of 2:1. The oil to s-co mixture ratio was 1:3 and the mixture was homogenized with the aid of gentle heat (30-40 ºC) and vortexed for 2 min in a vortex mixer. 0.2 ml of the mixture was diluted with 200 ml of distilled water with gentle stirring on a magnetic stirrer. The ease of formation of emulsions was noted by noting the time required standing for 2 h and their % transmittance was measured at 638.2 nm by a UV-1800 spectrophotometer using distilled water as a blank 5.

Construction of Pseudo Ternary Phase Diagrams: Pseudo ternary phase diagrams were constructed using the water titration method. The surfactant and co-solvent were mixed in different volume ratio (1:1, 2:1 and 3:1) oil and S-mixture(s/co-s) were mixed thoroughly in different volume ratios (9:1, 8:2, 7:3, 6:4, 5:5, 4:6, 3:7, 2:8 and 1:9) in different test tubes. The each mixture in each tube was mixed homogeneously using a vortex mixture was obtained at room temperature.

Water was then added drop-by-drop at 0.05 ml increments using a pipette in to each oily mixture. During the titration, samples were stirred vigorously for a sufficient length of time for homogenization and visually monitored against a dark background by illuminating the samples with white light. The concentration of water at which the solution became clear was noted down.

Preparation of Liquid SMEDDS: The formulations were prepared by dissolving the required amount of Eprosartan mesylate in the mixture of oil, surfactant and co-solvent in vials. This mixture was mixed by vortexing until a transparent preparation was obtained.

Preparation of Solid SMEDDS: Thermo-dynamically stable liquid SMEDD was converted to solid SMEDDS to get the advantage of the solid dosage form. The prepared liquid formulation of Eprosartan Mesylate was drop-wise on a solid carrier in a glass mortar. The mixture was agitated until a uniform, free-flowing powder was obtained. This powder was screened through a 40# sieve. Then, the powder was filled in a "00" size hard gelatin capsule shell.

Robustness to Dilution: The prepared SMEDDS were diluted with water and 0.1N HCl up to 250,500 and 1000 times. % Transmittance was determined in UV spectrophotometer at 638.2 nm. The diluted microemulsion was observed at 1 h and 6 h for any sign of phase separation or drug precipitation 6.

Characterization of the Solid SEDDS:

Angle of Repose: The angle of repose for the each formulation was determined by the funnel method. The fixed amount of S-SMEDDS was allowed to flow out of the funnel orifice fixed at a height of 2cm from the surface on a plane paper kept on the horizontal platform. The gradual addition of the blend from the funnel mouth forms a pile at the surface this is continued until the pile touches the stem trip of the funnel. A rough circle is drawn around the pile base and the radius of the powder concentration was measured. Angle of repose was then calculated with the use of the following formula:

h = height of the pile

Bulk Density: Bulk density of the S-SMEDDS was determined by pouring gently 8.25 gm of powder through a glass funnel in to a 50 ml graduated cylinder. The volume occupied by the sample was recorded. The bulk density was calculated as follows:

Tapped Density: 8.25 gm of sample was poured gently through a glass funnel into 50 ml graduated cylinder. The cylinder was tapped from height of 2 inches until constant volume was obtained. Volume occupied by the sample after tapping were recorded on tapped density was calculated as follows:

Hausner Ratio: Hausner ratio was determined for characterization of flow of powder blend. A Hausner ratio greater than 1.25 is considered to be an indication of poor flowability. The hausner’s ratio is a number that is co-related to the flowability of the powder or granule material.

The Hausner ratio is calculated by the formula 8.

Solubility Studies: The equilibrium solubility of Eprosartan Mesylate in various oils, surfactants and co-solvent is shown. From the SMEDDS point of view, solubility in various excipients is an important criterion. In SMEDDS, the drug was soluble in the oil phase and/or was present at the interface. It depended on the hydrophobicity of the drug and the HLB value of the system. Sesame oil showed higher solubility compare with other oil. Tween 80 shows higher solubility compared with tween 20. The drug was freely soluble in the co-solvent polyethylene glycol. Surfactant and co-solvent were selected based on solubility as well as emulsification studies 9.

Emulsification Studies: Emulsification studies were performed to evaluate the ability of the surfactants and co-solvents to emulsify the oil phase. Sesame oil was easily emulsified compared with other oils by the tween 20 and tween 80 surfactants. This difference in results could be because of the difference in viscosity of the two oils. To increase the miscibility between the surfactant and the oil phases, three different co-solvents were screened. It was found that ethanol was more efficient for producing spontaneous emulsion with higher transparency 11.

Pseudoternary Phase Diagram: Pseudo ternary phase diagrams were constructed to identify the microemulsion regions and to optimize the concentration of the selected vehicles (Tween 80 and polyethylene glycol 400). For development of a SMEDDS formulation, optimum ratios of excipient concentrations established by means of phase diagram studies provided the area of the monophasic region. It is important to determine this area in order to ensure successful aqueous dilution without "breaking" the microemulsions.

Pseudoternary phase diagrams were constructed at three different ratios of surfactant and co-solvent (1:1, 2:1, 3:1). The pseudoternary phase diagram of Tween 20 and Tween 80 exhibits equal micro-emulsifying regions. Although, a slightly higher area of self-emulsification was found for a higher amount of co-solvent (at the ratio 1:1 S:Co-S), 3:1 ratio of S:Co-S was selected for further study to minimize the chances of precipitation, as higher amounts of hydrophilic substances like ethanol in formulation may result in precipitation of drug on dilution with aqueous media. 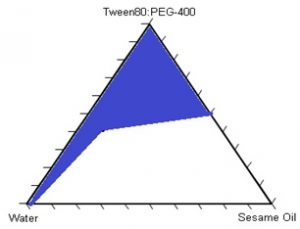 Thermodynamic Stability Studies: Thermo-dynamic stability studies were performed to observe the ability of the formulation to withstand different stress conditions. A stable SMEDDS formulation should not lose its ability of spontaneous emulsification upon dilution. Both liquid formulations were found to be stable in the centrifugation test and in the freeze-thaw cycle. There was no sign of phase separation. 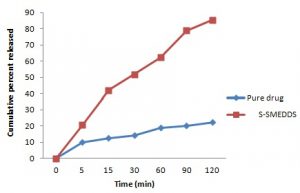 ACKNOWLEDGEMENT: Authors were thankful to the college for providing all necessary facilities for the completion of the project.

CONFLICT OF INTEREST: No potential conflict of interest was reported by the authors.