ABSTRACT: The liquisolid technique was chosen to enhance the dissolution properties of Candesartan. The study aimed to investigate the complexation of Candesartan with β-cyclodextrin in improving the dissolution profile of Candesartan. Candesartan is a BCS class-II drug. The inclusion complexes were formed by physical mixing (1:1 ratio). Liquisolid compacts were prepared by using, propylene glycol, tween 20 as the nonvolatile liquid vehicles. Avicel pH 102 was used as the carrier and aerosil 200 as a coating material and sodium starch glycolate as the disintegrant respectively. The pre-formulation studies like melting point, flow properties of Candesartan were compiled with IP standards. The FT-IR spectra revealed that there was no interaction between drug and excipient. Liquisolid compact (LS8) was showing the best release. Stability studies showed that there were no significant changes in physical and chemical properties of a tablet of formulation LS8 after 3 months. This research work has produced encouraging results in terms of increasing the in-vitro dissolution of poorly soluble drugs such as Candesartan using liquisolid technology. The technique is simple and effective can also be extended to other poorly soluble drugs.

INTRODUCTION: Candesartan is a BSC class ІІ drug. It is a selective AT1 subtype angiotensin ІІ receptor antagonist. Candesartan is used as a first line agent to treat hypertension and also used as a second-line agent to treat congestive heart failure, myocardial infarction, and coronary artery disease. Candesartan is having a very low bioavailability of approximately 15% that can be improved by increasing its solubility and dissolution rate 1. The solubility of drugs is a major factor in the design of pharmaceutical formulations leads to variable oral bioavailability. Improvement of solubility of Candesartan was carried out by complexation technique.

Candesartan and β-cyclodextrin inclusion complex were formulated in mortar and pestle by physical mixing in 1:1 molar ratio and prepare liquisolid compact of these complex. For solubility enhancement. Liquisolid technique defined as the water-insoluble drugs dissolve in a suitable nonvolatile solvent and prepared drug solution or drug suspension it can be converted into acceptably flowing and compressible powders by blending with powder excipients 2.

Solubility Study: The solubility of the Candesartan was carried out in propylene glycol, tween-20, PEG-400, PEG-200 and Tween-80. The excess amount of drug was dissolved in 5 ml of solvent. The solution was then subjected to ultrasonication for 30 min. It was then allowed to stand for 24 h at RT (room temperature) in tightly closed vials to attain saturation equilibrium. After 24h the solution was filtered through Whatman filter paper no. 41. It was then diluted appropriately with the solvent, and its absorbance was observed through UV spectrophotometer at 253 nm respectively 3.

Physical Mixture: The physical mixture of Candesartan with β-CD was prepared by mixing Candesartan with β-CD in a mortar and pestle. The mixture triturated was continuously stirred for one hour and then passed through sieve no. 100. The resulting sample was stored in a desiccator until further use. The physical mixture was prepared in 1:1 molar ratios 4.

Method of Preparation of Liquisolid System:  The drug was initially dispersed in the non-volatile solvent systems (propylene glycol) termed as liquid vehicles. Then carrier (avicel pH 102) was added to the above liquid by continuous mixes for a period of 10 to 20 min in a mortar. Then the disintegrant like sodium starch glycolate is added. Then to the above mixture, the coating material (aerosil 200) was added and mixed thoroughly in a mortar. The amount of carrier and coating materials added were based on the R-value. The final blend was compressed 5, 6. 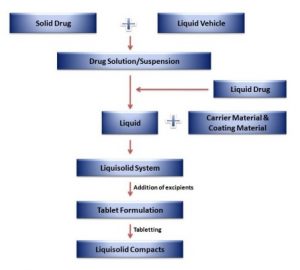 FIG. 1: FLOW CHART OF THE STEPS INVOLVED IN THE PREPARATION OF LIQUISOLID COMPACTS

TABLE 1: MANUFACTURING FORMULA OF LIQUISOLID COMPACT OF CANDESARTAN WITH β-CYCLODEXTRIN

Bulk Density: Bulk density is the ratio of a given mass of powder and its bulk volume.

Tapped Density: The required amount of powder is transferred into a graduated measuring cylinder, it is fixed to bulk density apparatus and tapped for 100 times.

Tapped density = Weight of powder / the tapped volume of powder

Hardness: Monsanto hardness tester can be used for the determination of the hardness. The indicator adjusted to zero. The force applied to the edge of the tablet is gradually increased by moving the screw knob forward until the tablet breaks. Reading is noted down and is expressed in kg/cm. 8

Thickness: Vernier caliper measures the crown to a crown thickness of tablets. It is expressed in mm. The thickness variation allowed is ± 5% of the size of the tablet.

Weight Variation: The 20 tablets are selected randomly from the lot and weighed individually to check for weight variation - pharmacopoeial limits.

Friability: The prepared 10 liquisolid compacts were randomly taken, they were weighed and placed in the friabilator and rotated for 100 revolutions for 4 min. and then formulations were taken out from the friabilator, dedusted and reweighed, determine the % loss using the following formula:

Disintegration Time: The test was carried out on 6 tablets using the apparatus specified in I.P. 1996 phosphate buffer solution at 37 ºC ± 2 ºC was used as a disintegration media and the time in second recorded for complete disintegration of the liquisolid tablet with no palatable mass remaining in the disintegration apparatus.

In-vitro Dissolution Testing:  A dissolution study was conducted for all the formulation using USP type-II apparatus. The dissolution test was performed using 900 ml of phosphate buffer (pH 6.8) was taken as the dissolution medium at 50 rpm and 37 ºC ± 0.5 ºC. 5 ml of aliquots were periodically withdrawn and the sample volume was replaced with fresh dissolution medium. The samples were analyzed spectrophotometrically at 253 nm. 9

Fourier Transforms Infrared Spectroscopy (FT-IR): The IR spectra of Candesartan and excipients were recorded by Shimadzu S-8400 FT-IR spectrophotometer. The sample was prepared by the KBr disc method and examined in the transmission mode.

Spectrum was measured over a frequency range of 4000-400 cm-1. The peaks obtained in the spectra were then compared with the corresponding functional groups in the structure of Candesartan 10.

Samples of the drug were placed in aluminum crucibles, and DSC thermograms were recorded at the heating rate of 10 ºC/min in the range of 0 ºC to 300 ºC. Nitrogen gas was purged at the rate of 30 ml/min to maintain an inert atmosphere.

Stability Study (Temperature Dependent): The liquisolid compact is packed in suitable packaging and stored under the following conditions for a period as prescribed by ICH guidelines for accelerated studies. Cold temp (Room temp) 37 ± 1°C and RH 75% ± 5%. Samples were withdrawn after each month and analyzed tablet characteristics and dissolution profile 11.

UV λmax and a Calibration Curve:

TABLE 4: CONCENTRATION AND ABSORBANCE OF CANDESARTAN AT 253 nm IN PHOSPHATE 6.8 PHOSPHATE BUFFER SOLUTION

TABLE 8: IN-VITRO DRUG RELEASE OF A LIQUISOLID COMPACT WITH β-CYCLODEXTRIN

This proves that there is no potential incompatibility with the drug the excipients used in the liquisolid formulation. 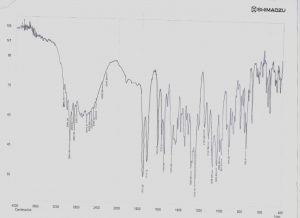 Thermal Analysis: The thermal behavior of the Candesartan with β-cyclodextrin and without β- cyclodextrin and optimized formulations were characterized by using DSC and graphs were shown in Fig. 9 and 10. The DSC thermogram of optimized formulation showed an endothermic peak at 114.49 °C and 244.34.22 °C. It indicates that there was no interaction found between drug and all other excipients used in the formulation of liquisolid compact Candesartan with β-cyclodextrin.

The optimized liquisolid formulation (LS8) was monitored for stability study for 3 months. The drug releases in formulations after 3 months were not significantly reduced; indicating chemical stability of the drug. It was also observed that the hardness and disintegration time were not significantly affected by the exposure to accelerated temperature and humidity Table 9. The dissolution profiles during the period of stability study were found to be unaffected. Hence the stability study indicates that the liquisolid dosage form possesses good stability.

SUMMARY: The purpose of the present study was to formulate the liquisolid compact of Candesartan with β-cyclodextrin for better dissolution rate accompanied by acceptable flow and compression characteristics. In this investigation, the pre-formulation study was performed for authentication of drug and determination of drug solubility. Hence, from a preformulation study following points were concluded. Based on the information of melting point, ultra Violet-Visible spectroscopy and FTIR spectra, the drug was confirmed to be authentic. Candesartan is practically insoluble in water, due to poor solubility. Improvement of solubility of candesartan was carried out by complexation technique.

Candesartan and β-cyclodextrin inclusion complex were formulated in mortar and pestle by physical mixing in 1:1 molar ratio and prepare liquisolid compact of these complex. For solubility enhancement. The solubility of candesartan in propylene glycol was 562 mg/mL. The systems were formulated with Avicel PH102 as carrier materials. Aerosil 200 was used as coating material. Sodium starch glycolate was incorporated as super-disintegrant. The compatibility between drug and excipients was checked and confirmed by DSC and FTIR.

The liquisolid compact was initially characterized by precompression study for flowability and compressibility. The formulations were found to possess good flow characteristics as well as satisfactory compressibility. The presence of propylene glycol can be considered to enhance the compatibility of the formulation. The DSC thermogram of liquisolid system indicates the presence of the dissolved drug in the propylene glycol. The blended mixture was evaluated for pre-compression evaluation, in which bulk density, tapped density, Carr's index % compressibility, Hausner's ratio and angle of repose were evaluated.

Liquisolid compact prepared by direct compression method. The liquisolid compact is evaluated for different parameters. Such as hardness, friability, weight variation, drug content, disintegration time, and in-vitro drug release was performed. In-vitro drug release was performed by using USP dissolution testing apparatus 2 (paddle method). Stability studies for optimized formulation were performed as per ICH guideline. The drug release rate was studied in phosphate buffer pH 6.8 and found to be enhanced in case of all liquisolid formulations. From the formulated batches by using nonvolatile solvent, i.e. propylene glycol and tween 20. Formulation (LS8) showed the highest release and better consistency as compared to tween 20 and chitosan liquisolid formulation.

The stability study showed that the drug contents, as well as tablet properties like hardness, disintegration and dissolution profiles, are not affected by stability conditions suggesting the chemical stability on exposure of accelerated conditions. Finally, it can be concluded that liquisolid formulation containing candesartan with β-cyclodextrin, Avicel as carrier and Aerosil as the coating material is effective to enhance the drug dissolution rate with the acceptable flow and compression characteristics. Thus liquisolid compact has potential application for formulation research in the improvement of dissolution rate of Candesartan.

CONCLUSION: The liquisolid system was developed by using candesartan as a drug. The liquisolid compact was prepared by direct compression method. The prepared compact was evaluated for preformulation study, from the results obtained from the preformulation studies, i.e., FTIR and DSC conclude that there was no drug excipient interaction. In precompression study of blended powder bulk density, tapped density, % compressibility, hausner's ratio and angle of repose were evaluated. We found that all the evaluations result was an acceptable range. After the precompression study, liquisolid compact was formulated by a direct compression method. Prepared formulations were evaluated for hardness, thickness, friability, disintegration time, weight variation and drug content. Reported values suggest that all was found to be within limits. From the formulated batches by using nonvolatile solvent, i.e. propylene glycol and tween 20. Formulation (LS8) showed the highest drug release (99.22%) in 60 min and better consistency. As compared to tween 20 and chitosan liquisolid formulation. The optimized formulations were kept for stability studies according to ICH guidelines. Results prevailed that optimized formulations were stable and there was no change in the drug release. Thus, it was concluded that liquisolid system could be prepared Candesartan with β-cyclodextrin to improve the bioavailability.