INTRODUCTION: Among the various routes of drug delivery, the oral route is perhaps the most preferred by patients and clinicians alike. However, peroral administration of drugs has disadvantages, such as hepatic first pass metabolism and enzymatic degradation within the gastrointestinal tract (GIT). So, there has been a growing interest in the use of delivery of therapeutic agent through various transmucosal routes to provide a therapeutic amount of drug to the proper site in body to promptly achieve and then maintain the desired concentration consequently, other absorptive mucosa is considered as potential sites for drug administration.

Transmucosal routes of drug delivery (i.e. the mucosal linings of the oral, nasal, rectal, vaginal, and ocular cavities) offers distinct advantages over per oral administration for systemic effect 1. Mucoadhesion can be defined as a state in which two components, of which one is of biological origin are held together for extended periods of time by the help of interfacial forces. The important role of mucoadhesive dosage forms is to help the controlled-release of an active ingredient through increasing of the residence time of dosage forms in gastrointestinal tract. Mucodhesive drug delivery systems its having various advantages and it has a lot of potential in formulating dosage forms for various chronic diseases 2, 3.

Losartan potassium is an orally active non-peptide angiotensin-II receptor antagonist. It is the first of a new class of drug to be introduced for clinical use in “hypertension” due to selectively blockade of AT-1 receptor and consequent reduced pressure effect of angiotensin II 5, 6. It belongs to class III, is soluble in acidic pH. Losartan Potassium is having narrow therapeutics index, poor bioavailability (25 to 35%) & Short biological half- life (1.5-2 hrs) 7, 8.

Administration of Losartan Potassium in a buccal drug delivery system would be more desirable for antihypertensive effects by maintaining the losartan plasma concentration well above the minimum effective concentration. Developing a sustained release drug delivery system like buccal tablet for Losartan potassium is desirable for an effective treatment of hypertension and is useful to reduce the dosage frequency to improve patient compliance 9.

Hence, in the present work an attempt was made to formulate mucoadhesive buccal tablet for losartan potassium using polymer in order to avoid first pass metabolism & prolonged effect.

Preparation of Bilayer tablet: The Bilayer tablets of Losartan potassium were prepared by the wet granulation method. The drug polymer and other excipients used for both immediate (IR) and Sustained release (SR) layer were passed through sieve #80 before their use in the formulation.

Formulation procedure: Granular were prepared using wet granulation method or per formulae given in (Table 1 and 2). Losartan bilayer tablets contained two layers i.e. an immediate release (IR) layer and a Sustained release (SR) layer. All ingredients were passed through a sieve (30#) and mixed were in a mortar. Granular were prepared using iso-propyl alcohol and povidone. Prepared granular dried in a ovan at a temperature below 50 0C for 30 minutes, After the granular are dried, pass through a sieve (24#) a screen of smaller size than the one used for wet mass select granular of uniform size to allow even fill in the die cavity. The selected granular lubricated with magnesium stearate and talc. Weighed Quantities of the ER layer equivalent to 150 mg were subjected to mild compression. Weighed granular of the immediate layer equivalent to 150 gm were added to the compressed ER layer. Both the layers were compressed together, on a 8-station Lab pressroatary tablet punching machine using 10 mm punches 10.

Surface pH study: For the determination of surface pH of the buccal tablets, a combined glass electrode is used. The tablet is allowed to swell by keeping it in contact with 1 ml of distilled water (pH 6.8 ± 0.05) for 2 hr at room temperature. The pH is identified by bringing the electrode into contact with the tablet surface and allowing equilibrating for 1 min 13.

In vitro dissolution studies: The release rate of Losartan potassium buccal tablets was determined using USP Dissolution testing apparatus II (paddle type). The dissolution test was performed using 900 ml of phosphate buffer pH 6.8, at 37 ± 0.5 0C and speed of 50 rpm. Alliquot (5ml) of the solution was collected from the dissolution apparatus for every 10 min and were placed with fresh dissolution medium. The aliquots were filtered through Whatmann filter paper no. 41. Absorbance of these solutions was recorded at 207 nm (losartan potassium). Dissolution medium and the top of rotating paddle not less than 1 cm apart from the vessel wall. Drug content in dissolution sample was determined by software (PCP disso v3) version 16.

Mucoadhesion time: Mucoadhesion can be defined as a state in which two components, of which one is of biological origin, are held together for extended periods of time by the help of interfacial forces. The ex-vivo resident time was determined using a modified USP dissolution apparatus. The dissolution medium was composed 800 ml 6.8 phosphate buffer maintain at 37± 2 0C. Got buccal tissue was fixed to the surface of the glass layer, vertically attached to the apparatus. The buccal tablet was hydrated from the surface using 0.5 ml of 6.8 phosphate buffer, and then hydrated surface was brought in to contact with the mucosal membrane. The time necessary for complete erosion are de-attachment of the tablet from the mucosal surface was recorded 12.

Stability studies: The purpose of stability testing is to provide evidence on how the quality of a drug substance or drug product varies with time under the influence of variety of environmental factors such as temperature, humidity and light and enables recommended storage coditions, re-test periods and shelf lives to be established 17.

Post-compression parameters: All the tablet formulations were subjected for evaluation according to various official specifications. Result test such as Shape and color, Thickness, Hardness, Friability, Weight variation, % Drug content uniformity and in vitro disintegration time are shown in Table 4.

Surface pH: In an acidic or alkaline pH which may cause irritation to the mucosa, it was determined to keep the surface pH as close to neutral as possible. Surface pH of all formulation was found to be 6.4±0.1075 to 6.5±0.9968. Surface pH values for all the formulations shown in Table 4. 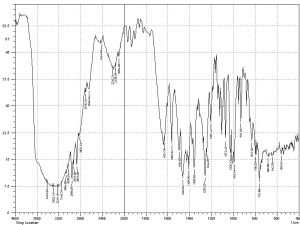 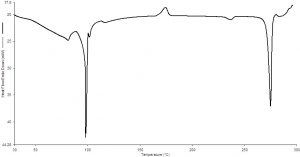 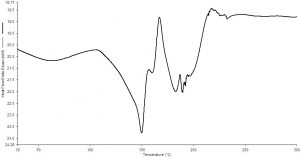 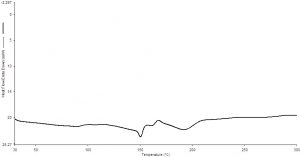 Differential scanning calorimetry: The DSC thermogram shows the endothermic peak at 150.08 0C and 167.49 0C of pure losartan potassium and optimized formulation respectively indicated the melting point which was reported in literature. There was no sharp change in melting point of drug. Thus there was no significant interaction between the drug, and polymer. (Fig. 4 and Fig. 6)

In vitro dissolution studies: All the five formulations were subjected for the in vitro dissolution studies using tablet dissolution tester USP II. The samples were withdrawn at 5 min intervals for immediate release layer and 10 min intervals for extended release layer and analysed at 207nm. The results obtained in the in-vitro drug release for the formulations IF1 to IF5 are shown in Fig. 2 and respectively. 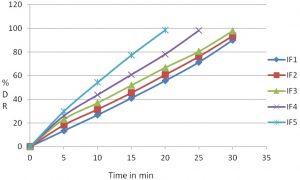 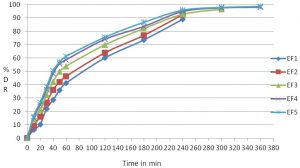 ACKNOWLEDGEMENT: We are thankful to Abbott Healthcare Pvt. Ltd. for providing gift sample of drug and excipients. We are also thankful to principle of PDVVPF’s college of Pharmacy Ahmednagar for providing all necessary facilities.