INTRODUCTION: Recently, the transdermal route has veid with oral treatment as the most successful innovative research area in drug delivery. The transdermal drug delivery has gained importance in recent years, as it has potential advantages of avoiding hepatic first-pass metabolism, maintaining constant blood levels for a longer period resulting in a reduction of dosing frequency, improved bioavailability, decreased gastrointestinal irritation that occurs due to local contact with gastric mucosa and improved patient compliance 1-5.

The most exciting opportunities in polymer-based drug delivery in the arena of responsive delivery systems, with which it will be possible to deliver a drug in responses to a measured blood level or to deliver a drug precisely to a targeted site. It comprises a list of advantages over conventional routes such as: 6-9

Hydralazine hydrochloride is a drug candidate used to treat pulmonary arterial hypertension, and it acts as a vasodilator by relaxing smooth muscles of the pulmonary artery, and the treatment lasts for a long time. Extreme variability in oral dosing of HZH, the bioavailability of 31% and variable half-life of 3-7 h has made the dosage regimen complicated for oral usage. Low bioavailability, variable and short half-life may not be suitable to meet the therapeutic need for an alternative to an oral route where hepatic first-pass metabolism can be excluded and which can improve the therapeutic activity and quality of life of the patient 10-13.

Pre-formulation Studies: Pre-formulation studies such as physical appearance, solubility, melting point, drug excipient compatibility were performed to confirm the suitability and stability of drug and excipients for the formulation of transdermal patches.

Preparation of Transdermal Patches: Transdermal matrix patches of HZH were prepared by solvent casting technique. PVA transparent film as the backing membrane was prepared by pouring PVA (4%w/v) solution into Petri dish and drying in a hot air oven at 40 °C. Then the polymers, Eudragit L100, Sodium alginate, Ethylcellulose, PVP, carbopol, were taken in required quantity and dissolved in 20 ml of solvent. Then drug HZH were added in the polymeric dispersion then PEG400 (plasticizer) and oleic acid (permeation enhancer) were added into it. Then above mixture was poured in Petri dish. The rate of evaporation was controlled by inverting a funnel over the Petri dish for 48 h after drying patches were taken out of the Petri dish, wrapped with aluminum foil and stored separately in desiccators at room temperature for further analysis.

Physical Examination of Patches: All the formulated patches of Hydralazine hydrochloride were evaluated visually for appearance in terms of surface smoothness, brittleness, transparency, flexibility.

Thickness: The thickness of the patches was measured by digital vernier calipers with least count 0.001 mm. The thickness uniformity was measured at five different sites, and an average of five readings was taken with standard deviation.

Drug Content and Content Uniformity: A specified area of patch is to be dissolved in 5ml of dichloromethane, and the volume was made up to 10 ml with phosphate buffer pH 7.4, dichloromethane was evaporated. A blank was prepared using a drug-free patch treated similarly. The solutions were filtered through a 0.45 um membrane, diluted suitably, and absorbance was read at 260 nm in a double beam UV is a spectrometer.

Drug Excipients Compatibility Study: The pure drug and its formulation were subjected to IR studies. In the present study, the potassium bromide disc pellet method was employed instrument used was Shimadzu FTIR 8400 spectrophotometer. In this study, potassium bromide disc method was employed. IR studies of pure drug and physical mixture were done. The powdered sample was intimately mixed with dry powdered potassium bromide. The mixture was then compressed into the transparent disc under high pressure using special dies. The disc was placed in IR spectrophotometer using a sample holder, and the spectrum was recorded.

Folding Endurance: The folding endurance of patches was evaluated by folding repeatedly polymeric patches 2×2 at the same point until it broke. The 2×2 cm of the patch was taken from the center as well as from the edge of the patch. The test was conducted on three randomly selected patches from each formulation.

Percentage Moisture Content: The percentage of moisture content was determined for each formulation. Patches of 1×1 cm were taken from each patch. These patches were weighed individually using a digital weight balance. These polymeric patches were then placed in labeled Petri dishes and stored in a desiccator containing silica beads at 25 °C. The films were weighed for 5 days or until the invariable weight was achieved. Then calculated by using the following formula.

Percentage Moisture Uptake: The percentage of moisture uptake was determined for each formulation. Transdermal patches of 1 × 1 cm were cut from each patch. Patches were weighed individually by using a digital weighing balance. These patches were then placed in labeled Petri dishes and stored at 25 °C in a desiccator containing 200 ml saturated solution of potassium chloride for 84% relative humidity (RH). The patches were continuously weighed for 5 days of storage or until a constant weight was achieved. The calculated by using the following formula:

The whole assembly was fixed on the three stations in the receptor compartment was constantly and continuously stirred at 1000 rpm using magnetic beads, and the temperature was maintained at 37 ± 0.5 °C. The samples were withdrawn at different time intervals and analyzed for drug content spectrophotometrically.

Observation: The sharp peak observed at 260 nm, the further measurement was taken at 260 nm.

Drug Excipients Compatibility Study: Drug- polymer compatibility was checked by comparing the IR spectra of formulations with that of the pure drug. No significant changes in the functional groups between the two spectra were observed. This ensured the compatibility of the polymer with the drug. 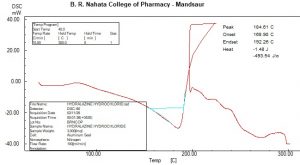 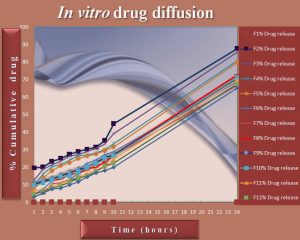 CONCLUSION: It was concluded that the transdermal patches of HZH were successfully made by using the different concentration of polymers.

ACKNOWLEDGEMENT: The authors are thankful to D. K. Pharma Pvt. Ltd., Maharashtra, India, for providing us gift sample of Hydralazine hydrochloride. The authors also wish to acknowledge with thanks to the management of Smriti College of Pharmaceutical Education, Indore for providing the necessary support and facilities for our research project.