INTRODUCTION: In the present scenario, the diabetes becomes a very common disease and longstanding diabeties mellitus leads in nephritic syndrome which result in the chronic kidney failure or death. The combination of the ACE inhibitors and angiotensin receptor blockers (ARBs), used to treat nephritic syndrome because the combination of the both results in the complete suppression of the Renin Angiotensin System therefore candesartan cilexetil and captopril selected for the treatment of nephritic syndrome. The sustained effect of both the drugs achieved by matrix microspheres in which the ethyl cellulose used as a rate determining constituent 1, 2.

Thus, the objective of the present study includes;

MATERIAL AND METHOD: Captopril was procure from the Lupin Pharmaceutical Ltd., India and candesartan cilexetil  was obtained as a gift sample fromVijayshree Chemicals Pvt. Ltd. Ethyl cellulose obtained as a Gift sample from Colorcon Asia Pvt. Ltd., Goa. All other chemicals and reagents used were of the analytical grade.

Method of preparation: The microspheres were prepared by emulsion solvent evaporation method using the formulation as shown in table 1. In this method ethyl cellulose was dissolved in acetone and a given amount of the drugs were dispersed in it to make different drugs to polymer ratio of 1:1, 1:2, 1:3 and stirred it for about 15 minutes, then polymer-drugs dispersion poured  in to 50 ml of liquid paraffin (light) containing Tween 80. The whole system stirred for 4 hours at 900 rpm, after stirring, extra liquid paraffin was decanted off and the microspheres formed were collected by filtration and washed them with n-hexane to completely remove the remaining oil and dried at 50oC in vacuum drier for 6 hours and collected for further studies.

Particle Size Determination: The size of Microspheres was determined by using an optical microscope (Magnus MLX-DX, Olympus, India) fitted with an ocular and stage micrometer.   The   mean   particle    size    was   calculated    by   measuring 200-300 particles.

Angle of Repose: Flow characteristic such as Angle of Repose (θ) of the Microspheres, which measures the resistance to particle flow, was determined by fixed funnel method and calculated by the following equation-

Where, h= height of pile, r = radius of the base of pile on the graph paper

% Compressibility: The prepared Microspheres were collected, weighed and poured in to 5 ml of graduated cylinder. This arrangement was tapped 100 times and then measured the volume of the filled Microspheres. It was the ratio of the volume before tapping which was filled in the graduated cylinder and after tapped volume. This was calculated by the use of following formula;

Actual weight of the product

Total weight of excipients and drug

In-vitro drug release: The in-vitro release of the microspheres was carried out by the use of the USP rotating basket method at 50 rpm at 37±0.5oC. Dissolution study was carried out in Phosphate buffer (pH -6.8) taking 900 ml for each study. 100 mg of microspheres were placed in the dissolution medium and test samples were taken from the medium at the predetermined time interval over a period of 12 hours and the samples were analyzed for candesartan cilexetil and captopril content by UV spectroscopy.

RESULTS AND DISCUSSION: The identification and compatibility of drugs with related polymer was studied by the Infra red spectroscopy and the results do not show any interactions. The shape and surface morphology of prepared microspheres was studied by means of scanning electron microscopy, which state that the amount and evaporation rate of the solvent from the solvent system effect the surface morphology and when the amount of acetone increases there is the sign of rupturing and roughness of the surface arises along with the entire morphological characteristics, the structure remain same after 12 hour release of the drug but it becomes bigger and more porous (Fig. 1). 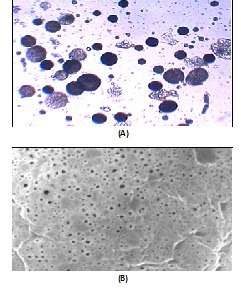 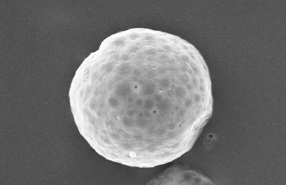 The present investigation state that if the drugs are soluble in the solvent system, it results in high drug entrapment efficiency than that of dispersed in the solvent system. The elimination of the drugs from the prepared microspheres highly dependent on the concentration of the polymer used, as the amount of the polymer increased the entrapment efficiency of the microsphere increased because of the good matrix formation. Drug entrapment was found good and ranges from 62.76±0.33% to 86.34±0.11%. Both the drugs soluble in ethanol ensure high entrapment as well as uniform distribution of drugs through out the matrix (Table 2).

In vitro Drug release study was performed in basket type dissolution apparatus and the effect of the variation of the Polymer drug ratio and solvent ratio on drug release was studied in different physiological solutions and found that increase in the amount of the polymer resulted in the decrease of the drug release rate (fig. 2).

Release Kinetics: Data obtained from in vitro study were fitted to various kinetic equations to find out the mechanism of drug release from the ethyl cellulose microspheres and the investigation state that the release of the drug from matrix microspheres follow Higuchi matrix model (Table 3). 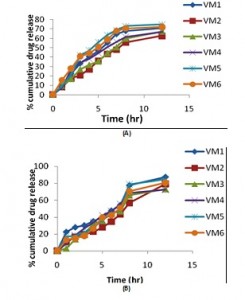 CONCLUSIONS: Captopril- candesartan cilexetil combination matrix microspheres were prepared successfully using emulsion solvent evaporation method. The polymer- drug and solvent variables give a impact on the size, shape, morphology, entrapment efficiency and drug release. The release of the drugs from the microspheres is diffusion controlled and provides sustaining of both the drugs which results in decrease of side effect, increase of bioavailability and therapeutic action of both combination drugs. Since prepared matrix microspheres are the potential candidate for diabetic nephropathy treatment.

ACKNOWLEDGEMENT: I am thankful to the Director of Advance Group of Pharmacy Colleges, Kanpur, for providing Infrastructure facility for the work.