Pulsatile release systems are formulated to undergo a lag-time of predetermined span of time of no release, followed by a rapid & complete release of loaded drugs.

The approach is based on the principle of delaying the time of drug release until the system transmits from mouth to colon 4, 3. A lag-time of 5 hours is usually considered sufficient since small intestine transit is about 3-4 hours, which is relatively constant and hardly affected by the nature of formulation administered.  Metoprololsuccinate is an antihypertensive agent, has biological halflife of 3-4hr 3, 5, 14.

Frequent administration of this agent is necessary due to it’s short biological halflife. Prolonged release dosage forms are designed to complement the pharmacological activity of medicament in order to achieve the longer duration of the action. Treatment for hypertension is a long term therapy 5, 14. 9, 15 Where non compliance is high, hence prolonged release dosage forms are useful for quality health care.Most of the water soluble drug containing formulations release the drug at a faster rate and likely to produce toxic concentrations of the drug on oral administration. It produces gastro intestinal adverse effects like gastric irritation 9, 15. 7 And 50% of the administer dose undergoes first pass metabolism. Absorption of the Metoprolol is more in the colon than compared to stomach and intestine.

Hence, designed “Pulsincap drug delivery system of Metoprolol succinate to the colon” to overcome all these disadvantages 7. 6 The  Pulsincap drug delivry system of Metoprolol succinate to the colon provides the following benefits Minimal toxic concentrations as this system directing the drug to absorb in colon. Avoidance of gastric irritation. Avoidance of first pass metabolism. Provides more absorption in colon.  The pulsincap formulation of Metoprolol Succinate provides time controlled release to treat the nocturnal symptoms of hypertension and angina pectoris 6.

In all the formulations, guar gum, Guar gum were sieved and pectin were sieved (<250 mm) separately and mixed with Metoprolol succinate (<150 mm) and PVP (<250 mm). The powders were blended and granulated with 5% of PVPK30. Isopropyl alcohol: water (1:1) was used as granulating agents. The wet mass was passed through a mesh and granules were dried at 50oC for 1 hr.

Step 3. Development of Modified Pulsincap Dosage Form: Granules equivalent to 50mg of Metoprolol succinate were accurately weighed and filled in to the formaldehyde exposed bodies by hand filling. Capsules containing the granules were then plugged with different grades of hydroxyl propyl methyl cellulose, with different concentrations (Table 2).

Plugs were punched by 7mm punch. It is called as tablet plug. The capsules were then completely coated withEudragit S 100 using different concentrations of 5%, 10% and 15% coating solutions were prepared using solvent acetone and mixed with 1% Dibutyl phthalate as plasticizer (Table 3). Coating was repeated until an 8-12% increase in weight was obtained. % weight gain of the capsules before and after coating was determined.

TABLE 6: INFLUENCE OF HPMC CONCENTRATION ON THE DRUG RELEASE OF METOPROLOL

A beaker (capacity 400 ml) containing 200 ml of rat caecal content medium was immersed in water maintained in the 1000 ml vessel, which, in turn, was kept in the water bath of the apparatus. The pulsincaps were placed in the baskets of the apparatus and immersed in the rat caecal content medium. As the caecum is naturally anaerobic, the experiment was carried out with continuous CO2   supply into the beakers. At different time intervals, 2 ml of the samples was withdrawn without a pre-filter and replaced with 5 ml of fresh phosphate buffered saline (PBS) bubbled with CO2 and the experiment was continued for 19 hr as the usual colonic transit time is 20-30 hr and the results were shown in table 7. 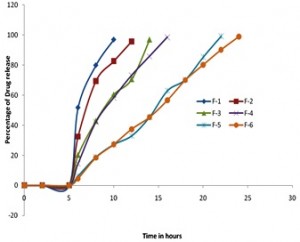 RESULTS & DISCUSSIONS: The present study was carried out to develop colon target drug delivery for chronotherapy of Metoprolol succinate. The selection of this approach is Pulsincap drug delivery. The previous studies says that to sustain the drug release for 24hr, capsules treated with formaldehyde for 12hr. But my present work concludes 8hr formaldehyde treatment is sufficient to sustain the release for 24hr and found that the capsule has maintained the physical stability during the dissolution process. Metoprolol succinate granules prepared with Guar gum,  in different ratios.

Among all the formulations formulated, F6 Guargum 1:3 sustained the release for 24hr and the ability of the used gums to sustain the release is following decreasing order F6> F5> F4> F3> F2> F1.Hydrogel plug is used in Pulsincap to maintain lag time and with an intention to direct the drug to colon. And found that the lag time maintained was directly proportional to the length of the plug employed. Tight fitting of the plug is advisable for better results. Enteric coating of capsule was done with Eudragits different concentrations. 10% of Eudragit S was found to be optimum from this study.

Metoprolol is one of the best drug for colon drug delivery system. Because the absorption is more in colon, can overcome first pass metabolism and no gastric irritation.

CONCLUSION: The present study was carried out to develop colon target drug delivery of Metoprolol Succinate. The selection of this approach is colon drug delivery. The main object was to target drug release for colon to maintain the chrono pharmacological Anti-Hypertensive activity. Metoprolol Succinate granules prepared with Guar gum, in different ratios. Among all the formulations formulated, F6 guar gum (1: 3) sustained the drug release for 24hrs and fulfilled the objective of this work. In future, if the pulsincap drug delivery overcomes this disadvantages it will be the best drug delivery for chronopharmacotherapy.

ACKNOWLEDGEMENTS: We are sincerely thankful to Natcopharma Pvt. Ltd., for providing gift sample of Metoprolol Succinate drug and we would also like to thank the management and staff of Bapatla college of pharmacy, Bapatla, for encouraging us and providing all facilities to proceed on the work.

A. Anil Kumar and K. Rajyalakshmi