FORMULATION AND EVALUATION OF MICROCAPSULES OF TRIHEXYPHENIDYLE HYDROCHLORIDE BY SOLVENT EVAPORATION METHOD.

FORMULATION  AND  EVALUATION  OF  MICROCAPSULES  OF TRIHEXYPHENIDYLE  HYDROCHLORIDE  BY  SOLVENT  EVAPORATION  METHOD.

ABSTRACT:Trihexyphenidyle is a lipophilic antiparkinsonian drug with short half life. Practically slightly soluble in water makes formulation and delivery difficult. By formulating the same in the microcapsule by using biodegradable polymer Eudrajit L 100 and S 100, the half life and solubility can be altered and hence drug release pattern. Trihexyphenidyle microcapsules were prepared by solvent evaporation method by using different drug-polymer ratio (1:2, 1:3, 1:4, 1:5). Prepared microcapsules were evaluated for the particle size, percentage yield, incorporation efficiency, flow property and in vitro drug release at pH 6.8 for 12 hours. From the result we can conclude that as the concentration of polymer increases, it affects the particle size, percentage yield and drug release of micro capsules. The formulation F2 shows the excellent flow properties, particle size, percentage yield (91.24%), incorporation efficiency (94.59%) and percentage drug release  (95.88%) for a period of 12 hrs. Results of the present study indicate that Trihexyphenidyle microcapsules can be successfully designed to develop sustained drug delivery, that reduces the dosing frequency and their by we can increase the patient compliance.

INTRODUCTION:Conventional oral drug adminis- tration does not usually provide rate-controlled release or target specificity. In many cases, conventional drug delivery provides sharp increase in drug concentration often achieving toxic level and following a relatively short period at the therapeutic level of the drug concentration eventually drops off until re-administration. In order to obtain maximum therapeutic efficacy, it becomes necessary to deliver an agent to the target tissue in the optimal amount for the required period of time, thereby causing little toxicity and minimal side effects 1.

Desired drug release can be provided by rate-controlling membranes or by implanted biodegradable polymers containing dispersed medication. Microparticulate drug delivery systems are considered and accepted as a reliable one to deliver the drug to the target site with specificity, to maintain the desired concentration at the site of interest without untoward effects 2.

Microencapsulation is a useful method which, prolongs the duration of drug effect significantly and improves patient compliance. Eventually the total dose and few adverse reactions may be reduced since a steady plasma concentration is maintained 3.

Parkinson’s disease is the most common neurodegenerative movement disorder of the brain that leads to shaking (tremors) and difficulty with walking, movement, and coordination, which affects about 1% of the population over age 60 . Sometimes Parkinson's disease occurs in younger adults.

It affects both men and women. Nerve cells use a brain chemical called dopamine to help control muscle movement. Parkinson's disease occurs when the nerve cells in the brain that make dopamine are slowly destroyed. Without dopamine, the nerve cells in that part of the brain cannot properly send messages. This leads to the loss of muscle function. The damage gets worse with time.

Trihexyphenidyle is also known as benzhexol, is an Anti- Parkinsonian agent of the antimuscarinic class. It binds to the M1-muscarinic receptor and possibly the dopamine receptor and by that trihexyphenidyl blocks efferent impulses in parasympathetically innervated structures like smooth muscles (spasmolytic activity), salivary glands, and eyes (mydriasis). Trihexyphenidyl is rapidly absorbed from the gastrointestinal tract. After oral administration, the onset of action occurs within 1 hour, peak effects last 2 to 3 hours.  Half life of the drug is 3.3-4.1 hours and in order to maintain therapeutic plasma levels, the drug must be administered approximately 2-5mg daily by oral individual dosage.

Microencapsulation is defined as the application of a thin coating to individual core materials that have an arbitrary particle size range between 5 and 5000 μm4. Microencapsulation is widely used in the pharmaceutical and other sciences to mask tastes or odors, prolong release, impart stability to drug molecules, improve bioavailability, and as multi-particulate dosage forms to produce controlled or targeted drug delivery 5, 6, 7, 8. It is therefore, a rapidly expanding technology for achieving sustained-release dosage forms.

The solvent- evaporation method of micro- encapsulation involves the use of emulsification of a solution containing polymer and drug with an additional medium in which the drug and polymer cannot dissolve 9. The technique is relatively simple and has been used to prepare microcapsules of a variety of compounds using several different polymeric materials 6, 10.

The aim of this work was to develop microcapsules of Trihexyphenidyl by solvent evaporation technique. Due to physicochemical properties and short half life, Trihexyphenidyl is a suitable candidate for Antiparkinson treatment.

METHOD 11: Microcapsules were prepared by solvent evaporation method. Accurately weighted Eudragit L‐100 and S‐100 in different ratios were dissolved in 20ml of acetone to form a homogenous polymers solution. Core material, i.e., Trihexyphenidyl was dispersed in it and mixed thoroughly (Table 1). This organic phase was slowly poured at 15°C into liquid paraffin (100 ml) containing 1% (w/w) of Span‐80 with stirring at 1000 rpm to form a uniform emulsion. Thereafter, it was allowed to attain room temperature and stirring was continued until residual acetone evaporated and smooth‐walled, rigid and discrete microcapsules were formed. The microcapsules were collected by decantation and the product was washed with petroleum ether (40-60°C), four times and dried at room temperature for 3 hrs. The microcapsules were then stored in a desiccators over fused calcium chloride.

Percentage Yield 12:The measured weight was divided by total amount of all non‐volatile components which were used for the preparation of microcapsule.

Incorporation Efficiency 11, 13:In 100ml volumetric flask 25mg of crushed microcapsules were taken and dissolved with small quantity of ethanol of the volume is made up to mark with pH 6.8 and stirred for 12 hours. After stirring the solution was filtered through Whatman filter paper and from the filtrate appropriate dilutions were made and absorbance was measured at 206 nm by using UV‐ spectrophotometer 1800 (Shimadzu).

Angle of Repose: Determination of angle of repose Trihexyphenidyl microcapsules were carried out by employing fixed funnel method.

Scanning Electron Microscopy 16:The samples for SEM analysis were prepared by following method. The shape and surface morphology of the microcapsules was studied by using scanning electron microscope (Materials Research Centre, Indian Institute of Science (IISc), Bangalore - 560012, INDIA). Microcapsules were mounted directly onto  the SEM sample stub using double-sided sticking tape and  coated with gold film (thickness 200 nm) under reduced  pressure (0.001 mm of Hg). The microcapsules were viewed at an accelerating voltage of 10KV.

Drug Release 16-19:In vitro release studies: In vitro dissolution profile of each formulation was determined by employing g USP XXII type 2 basket method (900 ml of pH 6.8‐phosphate buffer, 100 rpm, 37±0.5OC). Microcapsules equivalent to 100 mg of Trihexyphenidyl was loaded into the basket of the dissolution apparatus. Aliquot of 5 mL was withdrawn from the dissolution media at suitable time intervals and the withdrawn volume was replenished with the same volume of dissolution medium in order to keep the total volume constant. The absorbance of the samples was measured at λmax 206 nm after suitable dilution if necessary, using phosphate buffer of pH 6.8 as blank. Results of in vitro drug release studies obtained from absorbance data were tabulated and shown graphically as Cumulative % drug released Vs Time.

Preparative aspects of Eudragit microcapsules: Above formulated preparation remains un-disintegrated at pH less than 6 and it releases the drug slowly at pH above 6 i.e., in the intestine. Hence the prepared microcapsules of Trihexyphenidyle shows improved half life. To prepare pH dependent microcapsules the O/O (oil in oil) emulsion solvent evaporation technique was used since it yields more uniform particles. The method is correctly referred as O/O instead of W/O (water in oil) since a polymeric solution in organic solvent is considered as oil in micro encapsulation terminology. The use of span 80 as an emulsifying agent decreased the interfacial tension between the lipophilic and hydrophilic phases of the emulsion and further simplified the formation of microcapsules.

Span 80 formed a thin film around the droplets and thereby reduced the extent of coalescence, before hardening of the capsules, on collision of the droplets. The resultant microcapsules were free-flowing, and the use of span 80 was deemed effective. When 1:1 (w/w) drug/polymer concentrations were used for both the Eudragit RS and RL polymers, the quality of microcapsules formed was poor (Figures 2 and 3). These were irregularly shaped, not free flowing, and presented with lots of indentation. Microcapsules were only formed when the polymer concentration was increased to ratios of between 1:2 and 1:4 (w/w) with respect to the drug concentration.

Discrete, spherical, and uniform microcapsules were obtained with a 1:2 (w/w) drug/polymer ratio for both the RS and RL polymers, as can be seen in Figures 2-5. It is also evident that the microcapsules exhibited slightly porous surfaces, probably due to the high concentration of drug in the microcapsules. Liquid paraffin was selected as a continuous phase, since Trihexyphenidyl and Eudragit RS/RL are only very slightly soluble in liquid paraffin. Acetone has a dielectric constant of 20.7 and was therefore chosen as the dispersed or inner phase, since solvents with dielectric constants between 10 and 40 showed poor miscibility with liquid paraffin 20, 21, 22.

Yield of Microcapsules: Results are shown in Table 2. The drug content was found to be very high in all the cases probably due to polymer loss by adherence to the container as a result of viscous nature of slurry.

All values are represented as mean ± standard deviation (n=3)

For formulations F1, F2, F3 and F4 respectively, the mean particle size of the microcapsules significantly increased with increase in polymer concentration due to high viscosity of medium at a higher polymer concentration resulting in enhanced interfacial tension and diminished shearing efficiency. The angle of repose of microcapsule ranges from 17°55” ± 1.83, 18°35” ± 3.85, 21°40” ± 2.75 and 23°70” ± 3.35 (as shown in table 3). The values of angles of repose indicate excellent flow properties. 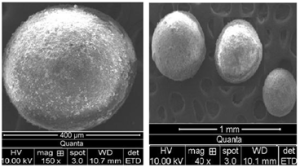 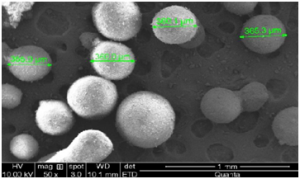 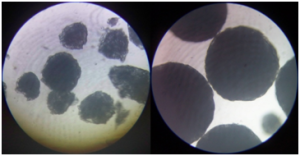 Drug release: In vitro release studies were carried out using USP XXII type 2 basket assembly. The release profile obtained for all the four formulations were shown in Fig. 5. It is important to note that the dissolution behavior of granules and powders is greatly influenced by their wettability, surface area, and particle size distribution 23. Drug release from microcapsules should theoretically be slower as the amount of polymer is increased because of an increase in the path length through which the drug has to diffuse. It was observed that the drug release from the formulations decreased with increase in the concentration of polymer added in each formulation.

The release of drug from polymer matrix takes place after complete swelling of the polymer and as the amount of polymer in the formulation increase the time required to swell also increase thereby decrease in the drug release. However, the release showed a bi‐phasic release with an initial burst effect. In the first 30 min drug release was 25.5%, 21.5%, 20.5% and 19.9% for F1, F2, F3 and F4, respectively. 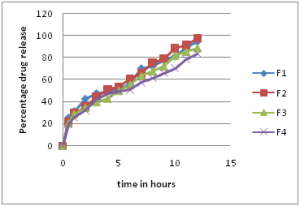 CONCLUSION: The solvent-evaporation method using Eudragit polymers at optimum levels was effective for the formation of Trihexyphenidyl microcapsules. From the results it seems that formulation F2 was found to be satisfactory in terms of excellent micromeritic properties, yield of microcapsule, (91.24%), incorporation efficiency (94.59%) and highest in vitro drug release of 97.5% in a sustained manner with constant fashion over extended period of time for 12 hrs. So from the result, we can conclude that concentration of polymers affect all the evaluation parameter significantly. Hence the prepared Trihexyphenidyl microcapsules may prove to be potential candidate for safe and effective sustained drug delivery.