ABSTRACT: The aim of this study was to develop microspheres based orodispersible tablets of roxithromycin using the solvent evaporation technique. The microspheres were formulated in to orodispersible tablets using direct compression technique by central composite design. The objective of the study was to analyze the effect of concentration of eudragit RS100 (X1) and concentration of polyvinyl alcohol (X2), on the entrapment efficiency of the drug. Tablets were evaluated for physical characteristics viz. weight variation, hardness, friability, disintegration time and in-vitro dissolution study. The hardness and weight variation of the tablet were found 4.7 ± 0.24 kg/cm2 and 346.74 ± 3.74 mg, respectively. Friability of tablets was found 0.54 ± 0.04 which is less than 1% or in the acceptable limit. Disintegration time and drug release were found 45 ± 0.51 seconds and 96.45 ± 2.24% in one hour, respectively. The drug release data were subjected to drug release kinetics study.

INTRODUCTION: Orodispersible tablets (ODTs) are also known as “Fast melting, Fast-dispersing, Fast dissolving, Rapid dissolve, Rapid melt, Mouth dissolving and quick disintegrating tablet” 1. The oral route is the most important method of administration of the drug for systemic effect. Oral drug delivery system generally includes substances to mask the taste of the active ingredients. This masked active ingredient is then swallowed by the patient's saliva along with the soluble and insoluble excipients. Advantages include a possible bypass of first pass effects and avoidance of systemic elimination within the gastrointestinal tract.

Although they offer advantages because of poor patient acceptability associated with this site, they are preferred for the local application rather than systemic application 2. The oral cavity is highly preferred as a route of administration as the mucosa is permeable with a rich blood supply 3. Microspheres are multi particulate drug delivery systems which are prepared to obtain prolonged or controlled drug delivery to improve bioavailability, stability and to target the drug to a specific site at a predetermined rate.

They are made from polymeric wax or other protective materials such as natural, semi-synthetic and synthetic polymers. Microspheres are characteristically free flowing powders having a particle size ranging from 1-1000 μm consisting of proteins or synthetic polymers 4. Roxithromycin is a macrolide antibiotic. Roxithromycin prevents bacteria from growing by interfering with their protein synthesis.

Roxithromycin binds to the subunit 50S of the bacterial ribosome, and thus inhibit the translocation of the peptides, it is more effective against certain gram-negative bacteria, particularly Legionella pneumonia 5. Therefore, the purpose of the present study was to develop an orodispersible tablet of Roxithromycin by direct compression. Such tablets should disintegrate rapidly in the saliva without the need of water and release of drug instantly for immediate therapeutic effect.

Optimization of Formulation: Batches were formulated according to the Central Composite Design (CCD) to study the effect of different variables on the entrapment efficiency of the drug. For the formulation, 2 factors were selected, containing 3 levels each. Factors are shown in Table 1 and 13 formulations were formed according to CCD.

The factors selected were:

Preparation of Roxithromycin Microspheres by Solvent Evaporation: The microspheres were prepared by solvent evaporation method. In the organic phase, roxithromycin and polymer were dissolved in 20 ml of dichloromethane (DCM), shake well and sonicated for 15 min. In the aqueous phase, PVA was dissolved in 100 ml distilled water. The organic phase was injected into the aqueous phase at a low stirring speed (200-600 rpm) on a magnetic stirrer for about 1 h until all the dichloromethane evaporated. Microspheres were separated by filtration, through a Whatman filter paper and dried at room temperature for 24 h 6. Dried microspheres were stored at 37 ºC.

Percentage Yield, Entrapment Efficiency, and Drug Loading: The drug loading and entrapment efficiency of microspheres were estimated by dissolving 200 mg microspheres powder in 20 ml phosphate buffer pH 6.8 and sonicated for 10 minutes, filtered and volume was made up to 100 ml and analyzed by UV spectrophotometer at a wavelength of 205 nm. Formulae for calculation are given below 7.

Particle Size Analysis: Particle sizing analysis was carried out by using Microtrac S 3500, USA instrument. Distilled water was used to prepare the samples. The flow rate was maintained at 75 cycles per minute and ran for 10 sec. Particle size was recorded as cumulant diameter 8.

The microspheres were placed on metal stubs using double-sided carbon tape and coated with gold to a thickness of about 450 Å using sputter coater for gold coating (Polaron SC7640, U.K) and visualized under scanning electron microscope 9.

Differential Scanning Calorimetry (DSC) of Optimized Microspheres: DSC measurements of RMS-9 were carried out on DSC Q10 V9.9. The instrument was calibrated using indium as standard. Samples were placed in sealed aluminium pans and heated from 30 °C to 200 °C at the rate of 10 °C / min under the nitrogen atmosphere (50 ml/min) with an empty pan as the reference.

In-vitro Dissolution Rate Studies: In-vitro dissolution study of microspheres was carried out in USP dissolution apparatus type II in 900 ml phosphate buffer (pH 6.8). The temperature was maintained of 37 ± 0.5 °C, at a speed of 75 rpm. Samples of 10 ml were withdrawn, replenished with fresh medium at predetermined intervals and analyzed by using UV spectroscopy at 205 nm 10.

Roxithromycin Oro-Dispersible Tablets Preparation: Roxithromycin oro-dispersible tablets were prepared by direct compression method. The tablets were prepared using super disintegrant (sodium starch glycolate, avicel), mannitol as a diluent, lactose as a sweetening agent, talc with magnesium stearate as a flow promoter. The optimized microspheres (batch RMS-9) and other ingredients were mixed together and then blended in a tumbling cylindrical blender with talc, and magnesium stearate and compressed into tablets using a 7.6-mm punch single-tablet machine.

TABLE 2: FORMULA FOR THE ORODISPERSIBLE TABLETS OF ROXITHROMYCIN

Bulk Density (BD) and Tapped Density (TD): Sufficient quantity of powder blend was introduced to a measuring cylinder of 100 ml. The cylinder was tapped 100 times and the tapped volume of packing was recorded. BD and TB are calculated by formulae 11:

Hausner’s ratio: It is an index of ease of powder flow and was calculated using the following formula:

Where TD is tapped density and BD are bulk density.

Weight Variation: The average weight of twenty tablets which are selected randomly was calculated.

Tablet Hardness: Using a Monsanto type tester, crushing strength of tablets was measured. Three tablets were selected randomly and average force which is used for crushing them was recorded.

Kinetics Study of Drug Release: To find out the mechanism and kinetics of drug release, the results of the in-vitro drug release study data were fitted with various kinetics equations like Zero order, First order, Higuchi model, and Korsmeyer-Peppas plot.

Differential Scanning Calorimetry (DSC) Analysis: The drug was further confirmed by DSC analysis and there was a sharp endothermic peak at 130.23°C, which indicates its melting point as shown in Fig. 2. Thus, from the analysis report of IR and DSC, the drug was confirmed as Roxithromycin.

In-vitro Dissolution Rate Studies: The drug release from microspheres for batches RMS 1 - RMS 13 were found to vary from 14.86% to 92.16%. The % drug releases v/s time plots for the formulation is presented in Fig. 3 - 5.

From results, all of the batches drug content of RMS-9 batch shows highest drug content compare to other formulation (92.16 ± 2.05).

Differential Scanning Calorimetry (DSC) of Optimized Microsphere: From results, all of the batches drug content of RMS-9 batch shows highest drug content compare to other formulation (92.16 ± 2.05). There was a sharp peak at 123.30 °C which is opposite to the melting point of the drug, polymer, and PVA as 146 °C, 160 °C and 180 °C respectively, represented that there was an interaction between drug, polymer and PVA as shown in Fig. 6. 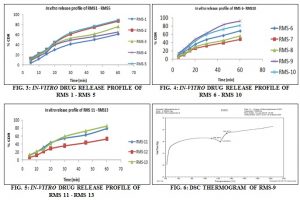 FTIR Study of Optimized Microspheres: In FTIR spectrum of the optimized batch, characteristics peaks (cm-1) of C=N at 1527 and C=O at 1742 have not appeared. During the process of preparing the microspheres, the C=N of the drug is converted into C-N and this bonds with the carboxylic hydroxyl groups in the polymer molecules. These types of interactions are useful for masking the bitter taste of drug.

Scanning Electron Microscopy (SEM): The SEM study of batch RMS-9 revealed the roxithromycin microspheres to be spherical in shape and uniformity was observed in the size distribution of microspheres.

TABLE 4: COMPARISON OF PEAKS OF ROXITHROMYCIN AND RMS-9

Application of CCD and ANOVA on Drug Entrapment Efficiency: Central composite design was used to study the effect of following two factors on the drug entrapment efficiency.

A mathematical model developed for the estimation of entrapment efficiency is as follows: 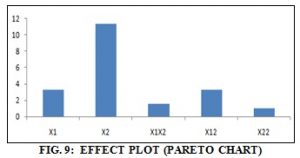 To compare the regression mean square with residual mean square F-test was carried out. The ratio F = 38.75 shows regression to be significant. Therefore, for the % of entrapment efficiency was estimated model may be used as a response surface. The 3-dimensional response surface plots are shown in Fig. 10 and the corresponding contour plots in Fig. 11.

In-vitro Dissolution Study: Orodispersible tablets drug release was found to vary from 34.25% to 93.14%. Drug release data is shown in Table 8. The % cumulative drug release v/s time plots for the formulation is presented in Fig. 12. 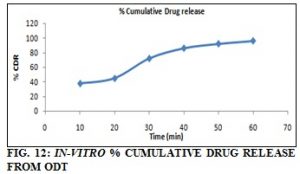 Drug Release Kinetics Study: To find out the mechanism and kinetics of drug release, the results of the in-vitro drug release study data were fitted with various kinetics equations like zero order, first order, higuchi model, and korsmeyer-peppas plot. R2 values were calculated from the linear curves obtained by the regression analysis of the plots below.

The release profile of first order (R2 = 0.978) was best. Thus, it was concluded that the drug release from oro-dispersible roxithromycin tablets was best explained by the first order model. From the values of correlation coefficient observed after applying different released models to dissolution profile data of tablets, the value of correlation coefficient obtained by first order (0.978) was observed closest to the unity than that of zero order (0.924), higuchi model (0.915) and korsmeyer-peppas model (0.925). So, orally disintegrating tablets follow first order kinetics.

CONCLUSION: The roxithromycin microspheres were successfully formulated by using the solvent evaporation method and further formulated into ODTs. The result showed if the concentration of Eudragit RS100 is decreased and concentration of PVA is increased there is an increase in entrapment efficiency and drug loading of the drug. Dissolution study of batch RMS-9 showed maximum drug release 92.16%. The combination of Eudragit RS100 (125 mg) and PVA (562.132 mg) was found to achieve optimum entrapment efficiency and in vitro release. The SEM analysis of batch RMS-9 revealed that the roxithromycin microspheres are spherical in shape and uniformity were observed in the size distribution of microspheres.

The size distribution of the microspheres was found in the range of 329.66 to 500.03 µm and the mean diameter was 452 µm. The presence of disintegrating agents MCC and SSG makes it possible to produce the tablet with an average hardness of 4.7 ± 0.24 kg/cm2, and can still disintegrate within 45 ± 0.51 seconds. The ODTs containing drug loaded Eudragit RS100 microspheres improved drug taste and also quickly dispersible tablets. Thus, formulation of Roxithromycin Eudragit RS100 microspheres incorporated in ODTs could enhance patient palatability, especially in pediatric, geriatric and bedridden patients.