The aim of the present research work was to enhance the solubility of Glipizide by solid dispersion method and to formulate a mouth dissolving tablet. Drugs are more frequently taken by oral administration. The solubility of Glipizide enhanced with different ratios of CCS by the kneading method .In-vitro release profile of solid dispersion obtained in Ph 6.8 phosphate buffer indicate that 100% drug release found within 20 min. These solid dispersions were directly compressed into tablets using sodium starch glycolate, crosspovidone and pregelatinised starch in different concentrations as a superdisintegrants. The prepared tablets containing the solid dispersion of Glipizide had sufficient strength of 1.5-2 kg/cm2. The disintegrated in the oral cavity within 21 sec. contain crosspovidone (5%) as superdisintegrant.

INTRODUCTION: An ideal dosage regimen in the drug therapy of any disease is the one, which immediately attains the desire therapeutics concentration of drug in plasma (or at the site of action) and maintains it constant for the entire duration of treatment. Drugs are more frequently taken by oral administration. It is considered most natural, uncomplicated, convenient, safe means of administering drugs, greater flexibility in dosage form design, ease of production and low cost.

Since the introduction of mouth dissolving tablet (MDT) in 1980s, it has become one of the fastest growing segments of oral drug delivery. About one-third of the world’s population mainly the geriatric and pediatric patient have swallowing difficulties and for such a group, MDT is emerged as an attractive alternative. Mouth dissolving tablets are characterized by hydrophilic matrix which allows rapid disintegration of the tablets when comes in contact with saliva and disintegrates/dissolves/disperses in saliva within few seconds, without the need of water, so, alleviating the problem of swallowing or chewing.

Techniques that have commonly been used to improve dissolution and bioavailability of poorly water-soluble drugs, in general, include micronization, the use of surfactant and the formation of solid dispersion (SD) 1.

The SD approach has been widely and successfully applied to improve the solubility, dissolution rates, and consequently, the bioavailability of poorly water soluble drugs.

A number of drugs have been shown to improve their dissolution character, which converted to SDs. To date, some reports on the formulation of these systems have appeared 2-5.

An obstacle of SD technology in pharmaceutical product development is that a large amount of carrier, i.e., more than 50 to 80% wt/wt, was required to achieve the desired dissolution.

This high percentage of carrier causes consistency of product performance at the time of manufacturing. This is a major consideration in that the number of market products arising from this approach has been less than expected.6-9

With regard to carriers for SD formulations, many carriers such as polyethylene glycol (PEG), polyvinylpyrrolidone (PVP), hydroxypropylmethyl cellulose (HPMC), hydroxypropylcellulose, hydroxy propyl methylcellulose phthalate (HPMCP), Gelucires, Eudragits® and chitosans have been reported to improve the solubility and bioavailability of poorly water soluble drugs 10-12.

Among the various carriers used in the formation PEG is most commonly used. CCS are semicrystalline polymers that have been used extensively in the SDs preparation for their solubilizing and surface active properties 13-14. Reported enhancement of solubility, dissolution and bioavailability of Glipizide (GLP) in SD systems using CCS as a hydrophilic polymer carrier. The non-ionic surfactant Tween 80 was used as the third component in the ternary SD system 15.

Mouth dissolving tablets of itraconazole 16, valdecoxib 17, diazepam 18, glyburide 19, clonazepam 20 and rofecoxib 15 were prepared using SD technique. Glipizide is a class-II antidiabetic drug which is purely insoluble in water. Rate of bioavailability of GLP is highly variable due to their low aqueous solubility.

One of the major problems with drug is its very low solubility in biological fluids and its short biological half-life of 2 h 21. Thus, these two factors act as the rate determining step or the barrier to rapid onset of action upon oral ingestion of GLP.

The aim of the present study was to prepare and evaluate the SD formulation of GLP. Moreover, it was also attempted for the incorporation of optimized SD formulation for the development of mouth dissolving tablets of GLP.

MATERIALS AND METHODS: Glipizide was obtained as gift sample from JCPL PHARMA, Jalgaon. PEG, β-Cyclodextrin and Cross carmellose sodium (CCS) was procured from JCPL PHARMA. All other chemicals used were of analytical grade.

Solubility Determination: The apparent solubility of Glipizide was determined in distilled water and buffer of pH 6.8 at 37 °C. Each preparation equivalent to 10 mg was added to 10 ml of solvent in glass vials with rubber closers. Then the vials were kept on a shaker incubator maintained at 37±0.5°C for 24 h.

After shaking, the vials were kept in an incubator at 37±0.5°C for equilibrium for 12 hr. The solution was then filtered through 0.45 µm millipore filter and the filtrate was assayed spectrophotometrically at 275 nm. The results are given in Table 1 & 2.

Solid Dispersions Formulation by Kneading Method 22: In this method weighed quantity of Glipizide CCS was placed in a mortar and then the mixture was kneaded with 1.5 times their amount of either ethanol 70 % v/v or water for 20 minutes. The kneaded mixture was dried in oven at 40°C until it reached uniform weight and then pulverized and screened through 100 meshes. Solid dispersion formulation given in table 3.

In vitro Dissolution Rate Study 23: Dissolution rates from different solid dispersions were determined in 900 ml of pH 6.8 buffer containing 2 % SLS at 37 °C with a stirrer rotation speed of 50 rpm using the USP dissolution test apparatus employing a paddle stirrer ( method – II ). A 5 ml aliquot of dissolution medium was withdrawn at 5, 10, 15, 30, 45, 60, 90, 105, 120 min with a pipette. The samples were suitably diluted and assayed spectrophotometrically at 275 nm. Each dissolution rate test was repeated 3 times. Results are reported in Table 4, Figure 5 shows the dissolution profiles of solid dispersions.

Solid dispersions and mannitol were mixed thoroughly in a glass mortar using a pestle. Disintegrants were mixed in the powder mixture, finally the talc and magnesium stearate were added as lubricants. Tablets of Glipizide: CCS were prepared using  1mm round flat-faced punch of rotary tablet machine (Cadmach, Ahmadabad India).  Compression force was kept constant for all formulations. The composition of the tablet is as shown in Table 5.

Results of angle of repose are given in Table 6.

LBD = Weight of the powder/ Volume of the packing.

TBD = Weight of the powder / Tapped volume of the packing.

Results of compressibility index are given in Table 6.

Wetting Time 24: The method reported by Mutasem was followed to measure tablet-wetting time. A piece of tissue paper folded twice was placed in a small petri dish (ID 6.5cm) containing 6ml of pH 6.8 buffer (simulated saliva fluid). A tablet was put on the paper, and the time for complete wetting was measured. Three trials for each were performed.

TABLE 1: SOLUBILITY PROFILE OF GLIPIZIDE & ITS DISPERSION IN WATER

TABLE 4: IN VITRO RELEASE OF GLIPIZIDE FROM SOLID DISPERSIONS 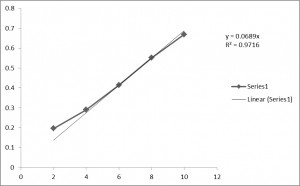 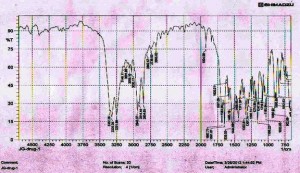 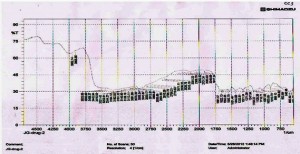 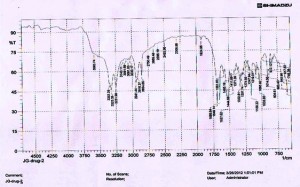 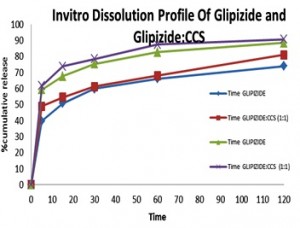 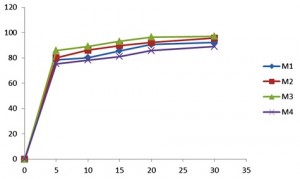 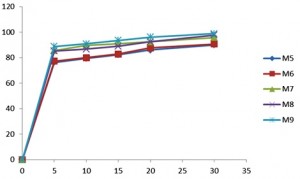 CONCLUSION: The aim of improving drug dissolution and bioavailability of poorly soluble glipizide was achieved successfully because of increased wettability and increased surface area available for dissolution.

Therefore, consequently solubility of drug was increased. So, the SD is promising technique for solubility enhancement of glipizide.