FORMULATION AND EVALUATION OF MOUTH DISSOLVING TABLET OF LOPERAMIDE

FORMULATION AND EVALUATION OF MOUTH DISSOLVING TABLET OF LOPERAMIDE

ABSTRACT: Purpose of present research work was to develop mouth dissolving tablets of loperamide using superdisintegrants. Mouth dissolving tablets of loperamide were prepared by direct-compression method after incorporating superdisintegrants Ac-Di-Sol, Sodium Starch Glycolate (SSG), and Crosspovidone in different concentrations. Effect of superdisintegrants on disintegration and dissolution behavior of tablet in O.1 N HCl, phosphate buffer (pH 6.8) was evaluated. To address poor solubility of loperamide, solid dispersion using solvent evaporation techniques was prepared using hydrophilic carrier PEG4000, PVP K-30, and Urea. Improvement in dissolution of drug was observed in solid dispersion as compared to pure drug. The 100% drug release was obtained from the solid dispersion (prepared by solvent evaporation method) of Loperamide: PEG4000 (1:6) in 10 minute. Formulations were evaluated for Weight variation, hardness, and thickness, friability, wetting time uniformity of dispersion, drug content, disintegration time and in vitro dissolution studies. The drug content of all the formulations was within the acceptable limits of the United States Pharmacopoeia XXVII. Optimized formulation showed good release profile with maximum drug being released at all-time intervals.  Optimized Formulation (F-8) containing crosspovidone showed > 90% drug release in 20 min and disintegration time of 17 sec.  From Stability point of view no appreciable change was observed in release profile and drug content after 3 month storage of tablet at 40±2º and 75±5% RH.

INTRODUCTION: Loperamide 4-[4-(4-chloro phenyl)-4-hydroxypiperidin-1-yl]-N, N-dimethyl-2, 2-diphenylbutanamide is a poorly water soluble drug used in the treatment of diarrhoea (solubility <1 mg/100 ml). It is commercially available as a hydrochloride salt under the trade name Imodium in order to overcome the problem of poor solubility and hence poor oral bioavailability 1.

The aim of this study was to use loperamide as a model compound to explore another route to tackle this problem, i.e. the use of solid dispersions. They are defined as the dispersion of one or more active ingredients in an inert hydrophilic carrier or matrix at solid state, prepared by the fusion, solvent or solvent-fusion method. These systems provide the possibility of;

(a)    reducing the particle size of the drugs to (nearly) a molecular level,

(b)   locally increasing the saturation solubility and/or;

(c)    of transforming the drug from the crystalline to the (partially) amorphous state.

Mouth dissolving dosage forms has solved some of the problems encountered in administration of drugs to the pediatric and elderly patient, which constitutes a large proportion of the world's population. Hence, patient demand and the availability of various technologies have increased the market share of Mouth dissolving tablets, which in turn prolongs the patent life of a drug. Keeping in view of the advantages of the delivery system, rapidly disintegrating dosage forms have been successfully commercialized, and because of increased patient demand, these dosage forms are expected to become more popular 2, 3.

The solubility studies were performed by taking 10 mg drug equivalent of physical mixture from the each batches (PM-A, PM-B and PM-C) and dissolved in water and PBS (pH6.8) kept in mechanical shaker for 30 min at 30ºC. Samples were taken after 30 min from each volumetric flask and absorbance were measured by UV-visible spectrophotometer 7.

Drug content: Accurately weighed quantity of solid dispersion, equivalent to 10 mg loperamide was dissolved in 10 ml of methanol by using mechanical shaker for 30 min. and filtered using whatman filter paper and absorbance was measured at 259 nm by UV-visible spectrophotometer 8.

Thin Layer Chromatography: Solid dispersions were subjected to TLC using pure Loperamide as a reference sample. The solvent system for TLC of Loperamide was chloroform, methanol, and formic acid (25.5: 3: 1.5). The Rf value of pure drug Loperamide and its Solid dispersion wear calculated.

In-vitro dissolution studies: Dissolution studies were conducted using a type II (paddle) USP dissolution apparatus with 900 ml PBS 6.8 pH as dissolution media. The temperature of the medium was maintained at 37°c ± 0.5 and RPM set as 50. The drug was assayed spectrophotometrically at 259 nm 6.

Uniformity of Weight: 20 tablets of each batch were collected randomly during compression and weight of individual tablets was carried out.

Hardness or Friability: For each formulation the hardness and friability of 6 tablets wear determined using Monsanto hardness tester and the Roche Friabilator.9

Content of Active Ingredients: The amount of active ingredient was determined by the method described in the drug content. By crushing the 10 tablets and taking powder equivalent to 8 mg Loperamide. Then this powder dissolved in 100ml 0.1N HCl appropriate dilution of the resulting solution was prepared and absorbances of the resulting solution were taken UV Spectrophotometrically. % drug content has been calculated.

Uniformity of Dispersion: This test is applicable only to Dispersible Tablets. Place 2 tablets in 100 ml of waterand stir gently until completely dispersed. A smooth dispersion is obtained which passes through a sieve screen with a nominal mesh aperture of 710 µm (sieve number 22).

Drug release study in simulated salivary fluid pH 6.8 & 0.1 N HCl: The drug release method for mouth dissolving tablets is comparable to the approach to the approach taken for conventional tablets, and is practically identical.  The release study carried out in USP Type 2 dissolution apparatus containing 900ml 6.8 pH phosphate buffer and 0.1 N Hcl at 50 rpm and 37oC temperature. The drug release sample 5ml withdrawal by suitable time interval and fresh dissolution medium were added in the each withdrawal. Then appropriate dilution of the samples has been prepared and absorbances of the resulting solution were taken spectrophotometrically 11.

Stability study:Stability study was conducted by storing the tablets at 40±2º/75±5% Relative humidity for three months. The content, hardness, weight variation and release behavior from dissolving tablets were tested after three month (ICH guidelines).

The FTIR data was compared with the standard spectrum of loperamide and the characteristics peaks associated with specific structural characteristics and their presence in polymeric carrier as well as solid dispersion were noted.

The drug showed major  peaks at 1447cm-1 for C-O-H, 1375cm-1  for  -CH3 ,1036 for R-Cl and peak 1622cm-1 for –C=O appears aliphatic ketone and peak between 770-735 cm-1 for characteristic aromatic hydrocarbon. Solid dispersion exhibited peaks of the drug and the carriers. The IR spectra(Fig 1) of  solid dispersion PEG4000 complex exhibited characteristic drug peak 1622 cm-1 and 1375cm-1 broadening due to overlapping between solid dispersion of PEG 4000, -C-C- of the drug perhaps result in increased solubility. This indicates that solid dispersion spectra were only the summation of loperamide and PEG4000 spectra and it reflectes that there was no major interaction between loperamide and PEG4000.

*All the values expressed in mean± standard deviation (n=3) 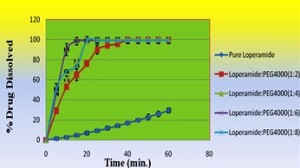 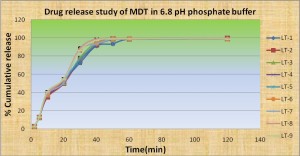 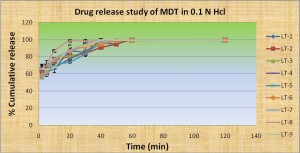 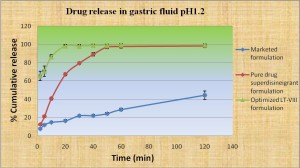 Tablets at 40 ± 2°C/75± 5 %RH for Three month, were tested for their contents, hardness, weight variation and release behavior. It was observed that content from the tablets shows no appreciable change (Fig. 6).

CONCLUSION: It can be concluded that the improvement in the dissolution of the poorly water soluble drug Loperamide through solid dispersion of solvent evaporation, which was obtained stable powder that possessed superior bioavailability and suitable for geriatric population and erratic absorption profile. Solid dispersion system of Loperamide can be used to enhance the in-vitro dissolution rate and bioavailability, due to improvement in wettability and solubilisation effect by the hydrophilic carrier (PEG4000, PVP-K-30 and Urea) at dissolution site.

The present study demonstrate that mouth dissolving tablet using solid dispersion have enormous potentials for increasing dissolution and finally the bioavailability of the drug.