FORMULATION AND EVALUATION OF MOXIFLOXACIN MICROSPHERES IMPLANT FOR INTRA-PERIODONTAL POCKETS

FORMULATION AND EVALUATION OF MOXIFLOXACIN MICROSPHERES IMPLANT FOR INTRA-PERIODONTAL POCKETS

ABSTRACT: Periodontal disease is one of the most prevalent oral diseases is caused by the gram-negative bacterial infection of periodontal pocket identified by inflammation of subgingival plaque and degeneration of alveolar bones, teeth, dental cementum, and periodontal ligaments. 80% of American adult and more than 50% of the Indian community suffers from this chronic inflammatory infection depicting the severity of the Periodontitis disease. The available therapies are to minimize the bacterial infection and to regenerate the damage done by infection and inflammation. The therapies involve systemic therapy, conventional therapy, as well as local therapy. The localized drug delivery system using anti-bacterial drug Moxifloxacin is a fourth generation fluoroquinolone antibiotic drug used in periodontal infections. The present study aimed at designing and evaluating Eudragit-coated pectin microspheres for localized controlled release of drug to achieve a minimum inhibitory concentration in the periodontal pocket. The microspheres were prepared by emulsion dehydration technique using pectin as a polymer coated with Eudragit RS100. The formulation B2 were characterized by particle size, Scanning electron microscopy (SEM), swelling index (3.32%), drug entrapment efficiency (80.25%) and drug release (90.32%) in 6.8 phosphate buffer. The results indicated that the formulation of Eudragit coated Moxifloxacin pectin microspheres could be utilized to maintain the localized drug concentration for a longer period and increase patient compliance with lesser adverse effects.

INTRODUCTION: Gingivitis at an early stage is identified by gingival swelling of gums, bleeding, bad breath, and at the severe stage, it shows symptoms like degeneration and inflammation of gums, alveolar bone, and dental cementum which is commonly known as Periodontitis 1.

Periodontal disease is one of the world’s most prevalent chronic diseases. It is estimated that nearly 80% of adult Americans suffer some aspect of the disease’s presence and about 50% of the Indian community are suffered from this disease. In the periodontal disease with the pocket formation is approx 1% at 10 years of age, 10% at 20 years of age, 20% at 35 years of age and 40% at 50 years of age. The treatment of periodontitis mainly focuses on the reduction of the total bacterial count. Conventional treatment methods include surgical and non-surgical management which includes mechanical scaling, root planning, often accompanied by antimicrobials. These treatment modalities are aimed at eliminating the entire bacterial flora; there should also be prolonged drug-microbial contact 2. 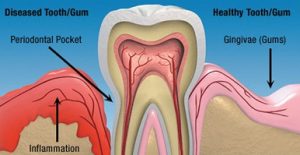 The frequency and extent of gingival recession increase with age. The pathogenesis of gingival recession is multifactorial and may be caused by inflammatory destruction, inappropriate tooth brushing, incorrect occlusal relationships, improper flossing, plaque accumulation and traumatic injury 3. Chronic and aggressive periodontitis are multifactorial diseases caused primarily by dental plaque microorganisms and with important modifying effects from other local and systemic factors. Local treatments with therapeutic agents are usually used to treat or prevent oral diseases.

However, the conventional forms as gels and emulsions are often challenged by low residence time in the oral cavity because of salivary secretion, swallowing, food intake and abrasive actions of the soft tissue. In consequence, the systems that cannot adhere to oral surfaces are effective only for a limited time after application. Bioadhesive systems in oral mucosa might improve the drug retention time and the efficacy of the treatments 4.

The conventional treatment for periodontitis involves mechanical processing (such as supragingival scaling, subgingival scaling, and root planning) advantageously accompanied by the adjuvant administration of antibiotics, which can be applied by systemic or local administration. The periodontal pocket provides a natural reservoir, which is easily accessible for the insertion of a delivery device. Therefore, intra-pocket drug delivery systems are highly desirable due to the potentially lower incidence of undesirable side effects, improved efficacy and enhanced patient compliance 5. The excessive concentration of antimicrobial agent at the diseased sites by local delivery provides a major advantage over systemic drug administration. A local drug delivery device comprises a drug reservoir and a limiting element that steers the rate of medicament release. This maintains the concentration of active agents at the site of activity for long periods, despite the loss of drug from crevicular fluid clearance. Various agents like tetracycline, chlorhexidine, metronidazole, etc. have been formulated into local delivery devices 6.

These devices can maintain extremely high local concentrations of drug for prolong period and several implantable devices like fibers, films, Dental implant and gels are used. Thus the Dental implant could be easily placed into the periodontal pocket, and be capable of delivering a therapeutic concentration of Moxifloxacin for dose, a prolonged period with a lower dose 7. The drug needs to be retained on the mucosal surface enabling the controlled release of the drug at the local site. The administered micro­spheres transform to a gel structure in the periodontal pocket thereby enhancing the residence time of the formulation at the site of action 8.

Materials: The drug Moxifloxacin was obtained as a gift sample from Laborate Pharmaceuticals Ltd, Paonta Sahib, H.P., India. The polymers Pectin and Eudragit were obtained from SD fine-chem limited, New Delhi. All other chemicals were of analytical grade and procured from commercial sources.

Emulsion-Dehydration Technique: Polymer and drug were dissolved in distilled water and stirred for 10 hours. This drug-polymer solution was dispersed in light liquid paraffin containing span 80 and stirred at 1000 rpm continuously to obtain water/oil emulsion. The solution was rapidly cooled to 15 ºC, and then acetone was added to dehydrate the pectin droplet. This solution was maintained under 1000 rpm at 25 ºC for 30 min to allow the complete solvent evaporation. The micro-spheres were washed with acetone and placed in a desiccator.

This organic phase was then poured in 12.5 ml of light liquid paraffin containing 1% wt/vol span 80. The emulsification process was carried out for 2 h at 1000 rpm with a mechanical stirrer. The Eudragit coated microspheres were collected and rinsed with n-hexane and dried.

Drug-Excipient Interaction Study: Drug-polymer interaction study by FTIR. FTIR of the pure drug showed in Fig. 2 and physical mixture of the drug with polymers showed that there are no significant changes in the position of the characteristic peaks of the drug when mixed with pectin and eudragit showed in Fig. 3 in which indicate compatibility of polymer with the drug. 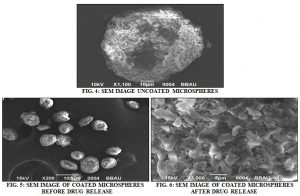 Percentage Yield: Due to the high concentration of pectin and eudragit polymer having more amount of polymer in the formulation F8 microspheres % yield were found to be maximum 57.27% and minimum found to be 53.27% in formulation F7 of batch B3. The detail result of the percentage yield is given in Table 1. 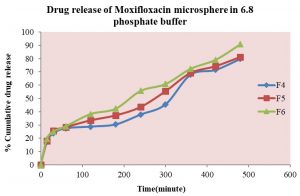 The interpretation of data was based on the values of the resulting regression coefficients. The release kinetics of Moxifloxacin microspheres followed the Higuchi model. 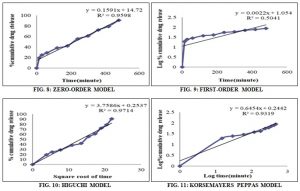 Antimicrobial Study: Antibacterial efficiency of Moxifloxacin loaded eudragit coated microspheres were assessed by determining minimum inhibitory concentration (MIC) by standard tube pathogenic strain of Staphylococcus aureus (S. aureus). Prepared agar plates seeded with the bacteria Streptococcus aureus. After 48 h of incubation at 37 °C, the in-vitro sample with different dilutions was transferred to freshly seeded agar plates and incubated for an additional 48 hours and observed the zone of inhibition on different time intervals on the agar plate. The inhibition zone of 1cm measured on the agar plate. The antimicrobial result data showed in below Table 3 9.

CONCLUSION: The limitation of systemic therapy with antibiotics have evoked an interest in the development of localized drug delivery system that can provide an effective antibiotic concentration at the periodontal site with lesser side effects. The Moxifloxacin microspheres prepared by emulsion-dehydration technique has proved to be a useful tool in the preparation of microspheres. By drug residence at the site of absorption, maintain the concentration of the drug and therapeutic efficacy can be achieved in contrast to systemic administration of antibiotics. The results indicate that the formulation of eudragit coated pectin microspheres of Moxifloxacin could be utilized as a potential drug delivery system to deliver the drug to periodontal pocket.

ACKNOWLEDGEMENT: I am thankful to all faculty members of the School of Pharmacy, Babu Banarasi Das University and my guide for providing me support for my research work.