ABSTRACT: Cyclobenzaprine hydrochloride (CBZ) is a muscle relaxant. It has 33% bioavailability due to its first pass effect and hence posses problems in the development of oral sustained release formulations. Mucoadhesive thermo reversible in-situ nasal gel of Cyclobenzaprine HCl was designed and developed to sustain its release due to the increased nasal residence time of the formulation. Poloxamer 407 (PF 127) was selected as it has excellent thermo sensitive gelling properties. HPMCK4M was added to impart mucoadhesive to the formulation, and PEG 400 was used to enhance the drug release. 32 Factorial designs were employed to assess the effect of concentration of HPMCK4M and PEG 400 on the performance of in-situ nasal gel systematically and to optimize the formulation. An optimized in-situ nasal gel was evaluated for appearance, pH, drug content, gelation temperature, mucoadhesive force, viscosity and ex-vivo permeability of drug through nasal mucosa of a goat. Additionally, this formulation was proved to be safe as histopathological studies revealed no deleterious effect on nasal mucosa of a goat after prolonged exposure of 21 days to the optimized formulation. Thus the release of Cyclobenzaprine HCl can be sustained if formulated in an in-situ nasal gel containing poloxamer 407 to achieve its prolonged action.

INTRODUCTION: Nasal drug delivery system is a potential route for direct delivery of drug to the central nervous system through the olfactory region by bypassing hepatic first-pass metabolism 1. Cyclobenzaprine hydrochloride (CBZ) is a centrally acting, skeletal muscle relaxant which acts primarily within the central nervous system at brain stem level. It's bound to the serotonin receptor that reduces muscle tone by decreasing the activity of serotonergic neurons. It undergoes rapid and extensively first-pass metabolism in the gastrointestinal and liver.

The nose forms a part of the body’s defense mechanism against foreign assault, and therefore, a major disadvantage of nasal administration is the rapid mucociliary clearance of substances from the nasal cavity causes poor absorption of the drug. Therefore the mucoadhesive polymer is used to decrease the mucoadhesive clearance to longer the residence time 3.

A nasal mucoadhesive in-situ gel is liquid like before nasal administration and undergoes gelation upon contact with nasal mucosa is conferred via the use of Thermoreversible polymers. They are a novel state of matter having both solid and liquid-like properties which can be delivered as a fluid and solidifies within the body’s environment where the temperature is higher than the sol-gel transition temperature 4. The formulation has the advantage to prevent the anterior leakage of the dosage form and enhance the nasal bioavailability due to longer residence time in the nasal cavity. For better patient compliance, it is desirable to deliver the drug quickly through the nasal mucosa because it is difficult to hold the gel in the nasal cavity for more than 7-8 h. So, we have used the permeation enhancer 4, 5, 6.

Fourier Transform Infrared Spectroscopic Studies (FT-IR): The IR studies were carried out by the pressed pellet technique using a KBr press. Potassium bromide was taken and kept in a hot air oven for two hours for the removal of any moisture if present. The drug powder sample was mixed with dried KBr crystals, and the mixture was pressed to form pellets using KBr press. The prepared pellet was placed in the sample holder and kept in the instrument to record the IR peaks. Drug-excipient compatibility was studied by Infrared spectroscopy. The spectra were compared for compatibility study.

UV Spectroscopy: Accurately weighed 10 mg of Cyclobenzaprine hydrochloride was dissolved in 100 ml of buffer media to get the stock solution of 100 μg/mL. From this stock solution aliquots of 0.5, 1.0, 1.5, 2.0, 2.5 and 3.0 ml were withdrawn and further diluted to 10 ml with buffer media to obtain a concentrations range of 5 to 30 μl/mL. The absorbance of the solutions was measured at 290 nm by using UV-Vis spectrophotometer. A graph of concentration vs. absorbance plotted and a standard calibration curve was obtained.

Preparation of Mucoadhesive Thermoreversible Nasal in-situ Gel: There are two methods of preparation of gels, cold method, and hot method. Cold method is most preferred. In this study, the cold method was adopted for the preparation of the gel. The Cyclobenzaprine hydrochloride, PEG 400 and mucoadhesive polymers were stirred in the calculated amount of distilled water at room temperature. The dispersions were cooled down to 4 °C; the poloxamer 407 was added slowly with continuous stirring. The dispersions were then stored in a refrigerator until clear solutions were obtained.

Clarity: The visual inspection of each formulation was done to test the clarity of the formulation.

Viscosity: The viscosity of the formulation was measured by Brookfield RV-E viscometer with the use of spindle number 6 at 20 RPM. The viscosity of the batches was measured by Brookfield viscometer at different temperature ranging from 4 ºC and 32 ºC. The temperature was increased by putting the solution into the water bath. The spindle number 6 was used and it kept constant for each batch. The graph of viscosity against temperature was plotted.

pH of Formulation: pH of each formulation was determined by using pH meter (LI 610, Elico). The pH meter was first calibrated using solutions of pH 4 and pH 7.

Drug Content: 1 ml of solution was taken in a 25 ml volumetric flask, then serial dilution was made using buffer pH 6.4 make the concentration of the solution ten mcg/mL. Then the absorbance of the final solution was examined using UV- spectrophotometer at λmax 295 nm.

Mucoadhesive Force: The mucoadhesive potential of each formulation was determined by measuring the force required to detach the formulation from nasal mucosal tissue by using a modified analytical balance. A section of nasal mucosa was cut from the goat’s nasal cavity and instantly fixed with a mucosal side out onto each glass vial using a rubber band. The vials with nasal mucosa would be stored at 37 °C for 5 min. Another vial with a section of the mucosa was connected to the balance in an inverted position while the first vial was placed on an adjustable height pan. A fixed amount of sample of each formulation was placed onto the nasal mucosa of the first vial. Then the height of the second vial was adjusted so that mucosal surfaces of both vials come in intimate contact. Two minutes contact time was given to ensure intimate contact between tissues and the sample. Then weight would be kept rising in the pan until vials get detached. The bioadhesive force, expressed as the detachment stress in dyne/cm2, was determined from the minimal weights that detached the tissues from the surface of each formulation using the equation,

Where, m = Weight required for detachment of two vials in g, g = Acceleration due to gravity [980 cm/s2], a = area of tissue exposed. 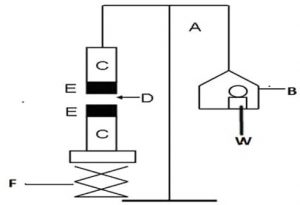 In-vitro Permeation Studies: The goat nasal mucosal tissue was inserted in the Franz diffusion cell. The phosphate buffer of pH 6.4 was added to the acceptor chamber. 1 ml of gel was placed in the donor compartment. At a predetermined time point, 2.5 ml sample was withdrawn from the acceptor compartment, replacing the sampled volume with phosphate buffer pH 6.4 after each sampling for a period of 5 h. The absorbance was measured spectrophotometrically at λmax 295 nm.

Stability Study: Stability studies were conducted according to the ICH guidelines for an optimized batch of in-situ gel. A sufficient quantity of prepared in-situ gel, in screw-capped vials, were stored in desiccators containing the solution of NaCl which gave relative humidity of 75 ± 5%. The desiccator is placed in a hot air oven at a temperature of 40 ± 2 °C for 21 days for thermoreversible gel. Samples were withdrawn at 7, 14, 21 days. The appearance, pH, drug content and drug release were studied.

Regression coefficient was found to be 0.999 which showed a linear relationship between absorbance and concentration.

Results of Evaluation Parameters of in-situ Gel Formulation: Clarity: The formulation was found to remain clear.

FIG. 5: EFFECT OF TEMPERATURE ON VISCOSITY

Batch B7 to B9 only about 90% drug was released in 5 h because of increased concentration of PEG. Optimized batch decided from the above evaluation parameters (pH, drug content, gelling capacity, gelation temperature, gel strength, and muco-adhesive force) B5, B7 and B8, only B5 batch showed drug release more than 90% w/v in 5 h. While in batch B7 and B8, only 92% to 93% w/v drug release was obtained in 8 h. So for the thermoreversible in-situ batch, B5 was the optimized batch.

TABLE 7: % CUMULATIVE DRUG RELEASE PROFILE OF THERMOREVERSIBLE GEL OF B1 TO B9

TABLE 8: RESULT OF COMPARISONS OF FLUX OF PURE DRUG AND FLUX OF IN-SITU GEL FORMULATION

The result of Comparisons of Flux of Pure Drug and Flux of Formulation: From the results, it is concluded that the flux value of in-situ gel formulation is higher as compared to the pure drug which permeated through the goat nasal mucosa. The comparative fluxes of pure drug and formulation were shown in Fig. 7. It indicates that initially there was a high level of flux and further it decreases because of the burst effect followed by sustained release.

Stability Study: From the stability studies of the optimized formulation for 21 days, it was found that there was not a significant change in appearance, pH, drug content and % drug release profile which indicated that the developed formulation of Cyclobenzaprine hydrochloride nasal in-situ gel was stable after 21 days.

CONCLUSION: Study aimed to achieve brain-targeted drug delivery of Cyclobenzaprine hydrochloride for the patients suffering from a skeletal muscle disorder. Nasal drug delivery system is a potential route for direct delivery of drug to the central nervous system through the olfactory region by bypassing hepatic first-pass metabolism which gives fast onset of action. Cyclobenzaprine hydrochloride if formulated as a nasal in-situ gel, it would remain in contact with the nasal mucosa for a longer period, deliver the drug from nose to brain via olfactory region. The in-situ gel was formulated by temperature-sensitive approach using simple mixing method or cold method.

ACKNOWLEDGEMENT: The authors acknowledge Parul Institute of Pharmacy and Research, Parul University, Vadodara for their support. The authors also want to thanks the library of college for providing various sources for their work. I am very thankful to college to help me in every step of my work.

CONFLICT OF INTEREST: The authors suggest that there is no conflict of interest.