FORMULATION AND EVALUATION OF MUCOADHESIVE MATRIX TABLET OF ACYCLOVIR

FORMULATION AND EVALUATION OF MUCOADHESIVE MATRIX TABLET OF ACYCLOVIR

ABSTRACT: The binding capacity of mucoadhesive polymers with gastric mucin prolongs the gastric residence time, increasing bioavailability. In the present research work, an attempt was made to formulate and evaluate sustain release mucoadhesive matrix tablet of Acyclovir. In the present work, an effort has been made to evaluate the effect of mucoadhesive polymers on the release characteristics of mucoadhesive matrix tablets of Acyclovir. Matrix tablets were prepared by wet granulation method using different types and levels of polymers viz. Chitosan and HPMC K4M. Tablets were evaluated for thickness, friability, hardness, uniformity of weight, the content of active ingredients, mucoadhesive strength, and in-vitro dissolution studies. The studies indicated that the drug release can be modulated by varying the concentrations of polymers. It was observed from the optimization studies that the F3 formulation has exhibited the best release profile of the drug and can sustain the drug release for 8 h with optimum mucoadhesive strength.

INTRODUCTION: The systemic delivery of drugs through novel administration methods is one area in which significant changes and improvements have been made. Consequently, precise control of drug input into the body by various routes is now possible. Controlled and sustained-release formulations have been developed and are gaining in popularity and medical acceptance. Sustained release dosage forms are designed to release a drug at a predetermined rate to maintain a constant drug concentration for a specific period with minimum side effects.

The advantage of administering a single dose of a drug that is released over an extended period to maintain the uniform blood level of a drug often translates into better patient compliance and enhanced clinical efficacy of the drug for its intended use 1. Acyclovir is an antiviral drug; it is given in conventional dosage form five times a day; hence, frequent administration is its major problem. Moreover, the major absorption site is from the stomach and the upper part of the intestine.

The challenging task of drugs with a narrow absorption window in the gastrointestinal tract or acting locally in the stomach is to prolong drug release and retain the dosage form in the upper gastrointestinal tract. This result in higher bioavailability, a reduced time interval for drug administration, and thus better patient compliance. Matrix technologies have often proven popular among the oral controlled drug delivery technologies because of their simplicity, ease in manufacturing, high level of reproducibility, stability of the raw materials and dosage form, ease of scale-up, and process validation.

The primary goal of a mucoadhesive controlled drug delivery system is to localize a delivery device with the body to enhance the drug absorption process in a specific manner and to facilitate intimate contact of the dosage form with the underlying absorption surface to improve and enhance the bioavailability of drugs 2.

In the present study, an attempt was made to develop a sustainable release mucoadhesive matrix tablet of Acyclovir using polymers like Chitosan and HPMC K4M, thereby enhancing the bioavailability of selected drug and optimizing the process variables and additives for the preparation of matrix tablets with desirable physicochemical and in-vitro release characteristic.

The term mucoadhesion refers to forming a bond between mucus and polymer. The mucoadhesive system has many advantages, such as bioavailability enhancement, increased residence time, and utility in local and systemic therapy.

The interest in mucoadhesion has been bolstered by developing novel bioadhesive polymers for mucosal delivery 3. There are two stages of the Mucoadhesion contact stage and consolidation stage.

Theories of Mucoadhesion 5: The phenomenon of mucoadhesion is well explained by six general theories of adhesion 3, 6, 7. 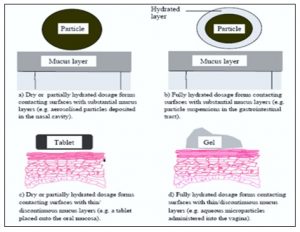 Calibration Curve by UV Analytical Method: A series of solutions of Acyclovir in methanol of concentrations 1-20 µg/ml was prepared. The absorbance of all the solutions was measured using methanol as blank at 256 nm using double beam spectrophotometer. A standard plot of absorbance v/s concentration of drug in µg/ml was plotted. Coefficient and regression equations were obtained from the calibration curve.

UV Spectroscopy (Determination of ƛmax): About 10 mg acyclovir was accurately weighed and dissolved in 10 ml of methanol to make concentration 1 mg/ml. This solution was then suitably diluted with methanol to get a final concentration of 10 µg/ml. UV spectrum was recorded over the wavelength range 200-400 nm.

FTIR Spectroscopy: The infra-red spectrum of the Acyclovir was recorded using a Fourier Transform Infra-Red spectrophotometer over wavelength ranging from 400 to 4000 cm-1 (Jasco 460 plus).

Drug Excipient Compatibility Studies: FT-IR spectra matching method was used to detect any possible chemical interaction between the Acyclovir and polymers. The samples were ground, mixed thoroughly with KBr, and compressed at a pressure of 15 tons / cm2. Samples were prepared for Acyclovir, polymers such as Chitosan, HPMC K4M, and the physical mixtures of drugs with polymers. The spectra obtained were compared and interpreted for the functional group peaks.

This design was based on a 32 factorial design, three replicates of the central run, leading to 9 sets of possible combinations, allowing each experimental response to be optimized. Different batches were prepared with different independent factors at different levels and responses.

The experiments were designed to study the effect of two independent variables: the mucoadhesive strength and % drug release for 8 hrs.

TABLE 2: FORMULATION COMBINATION AS PER THE 32 FULL FACTORIAL DESIGNS

Preparation of Mucoadhesive Matrix Tablets: Different batches of matrix tablets containing 200 mg of ACV were prepared using wet granulation. First, all necessary components were previously sieved through a mesh size of 16mm. In every case, the ingredients included in Table 1 (ACV, HPMC K4M, and MCC) were mixed homogeneously. A known quantity of PVP was dissolved in enough amount of ethanol to achieve a damp mass, and this solution was gradually added and mixed continuously to the previous mixture to form a damp mass, that was forced through a mesh size of 16 mm, and the granules obtained were dried at 40°C for 12 h. Dried granules were lubricated with 1% Magnesium stearate (w/w). Tablets with an average weight of 525 mg and a diameter of 12 mm were obtained by compressing the lubricated granules using a Rimek tablet punching machine, fitted with a 10 mm diameter flat and circular punch and applying the maximum compression force accepted by the formulation 9, 10.

Six tablets were randomly selected from each batch and accurately weighed the tablet sample, and place the tablets in the drum. Rotate the drum 100 times and remove the tablets, re-weighed and percentage loss was determined.

Calibration Curve by UV Analytical Method: Calibration curve was done in 0.1 N HCl. The Regression Coefficients of 0.996 was obtained with the Equation Y= 0.066x-0.002 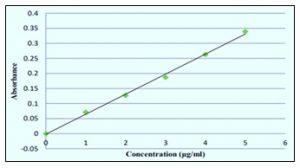 3.1 UV Spectroscopy (Determination of λmax): The dilution of the drug in different solutions was done, and the UV spectrum was obtained, as shown in Fig. 3.

The absorption maximum was obtained at 256nm. Therefore, all further analysis was done at 256nm. 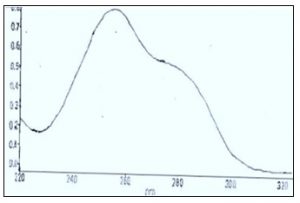 3.2 FTIR Spectroscopy: The IR spectrum of the drug was recorded, and the interpretations of the functional groups were done as per the structure. 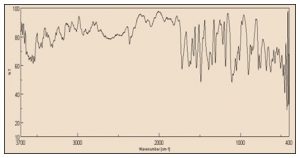 TABLE 3: INTERPRETATION OF PEAKS OBTAINED IN THE IR SPECTRA OF ACYCLOVIR

3.3 Drug Excipient Compatibility Studies: The results showed that the principal IR peak of pure drug and its physical mixture with polymer was almost similar, indicating no interaction between drug and polymer during the formulation of tablets.

3.4 Pre-formulation Studies of Powders: The prepared powders were characterized for the angle of repose, bulk density, tapped density, Hausners factor and Car’s compressibility index and the values were reported in Table 4.

The angle of repose of the different batches of powders was determined as per the method mentioned earlier, and results ranged between 21.07° to 26.17°. The bulk densities of powder ranged from 0.590 g/cm3to 0.693 g/cm3. Tapped density ranged between 0.763 g/cm3 to 0.890 g/cm3. The percentage compressibility, an indirect method of measuring powder flow property, was calculated, and it is in good agreement with the results of angle of repose and Hausner's ratio. All these results indicated that the powder possesses excellent flow properties and compressibility. 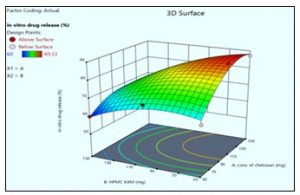 Mucoadhesive Strength: A 32 factorial design that revealed the effect of process parameters on the responses as well as any interaction within was selected. 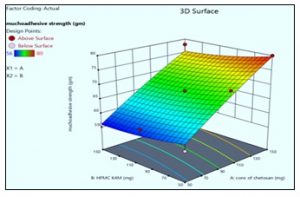 The equation for In-vitro drug release:

The equation for Mucoadhesive strength:

Analysis of variance (ANOVA) has been designed to determine the contribution and interaction of each variable to the model. The F distribution is a forecast proportion used by the analysis of the distribution of variances. The value of F would equate to one if they are equal. The F value of the ANOVA is the model mean square (MS) to the corresponding model mean square error. The higher the ratio, the higher the F value, and the more likely the variance that the model contributes is significantly higher than a random error.

The conclusion is based on the analysis of variance that the selected design sufficiently represents the statistics formulation of a sustained-release mucoadhesive drug delivery system. The ANOVA analysis of the linear model indicated that the model was significant (p<0.05), also endorsed by the large F value, and with the adequate Precision (ratio>4) observed, as shown in Table 4.

The optimized batch was obtained from statistical analysis of response plots using design expert software version 12. In the software, the criterion was selected in the range for % drug release and mucoadhesive strength; the desirability was found to be 1.000. The desirability concentration of Chitosan 150 (mg) and HPMC K4 M was found to be 50 (mg).

Increased polymer concentration reduced the diffusion of the drug from the matrix. If the viscosity increases, the entrapment of the drug is tightly bound in between the cross-links of the polymer; the drug will take time to release from the patches. From the results, it can be concluded that there was an increase in the duration of drug release with an increase in polymer concentration in the formula. 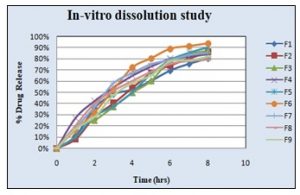 Measurement of Mucoadhesive Strength: The mucoadhesive strength for F1 to F9 batches was determined using the mucosal surface adhesion model. The mucoadhesive strength of the tablet was dependent on the property of the bioadhesive polymers, which on hydration, adhere to the mucosal surface, and also on the concentration of polymer used. Bioadhesive force values ranged from 56.02 gm to 80gm. The in-vitro retention time is one of the important physical parameters of mucoadhesive tablets recorded as per the procedure mentioned above. Retention time values ranged from 3.5 h to 8.5 h. The result showed that, as the concentration of mucoadhesive polymer increased, the retention time also increased. 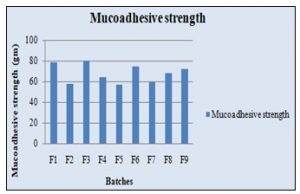 CONCLUSION: According to this study, the polymers HPMC K4M can create a regulated drug release pattern in the acyclovir tablets that have been manufactured. Due to this formulation's strong mucoadhesive strength, it is likely to spend more time in the digestive system, raising the bioavailability level. However, a correct balance between the various amounts of the polymers is required to achieve optimal release and mucoadhesion. Complete drug release can be achieved before the absorption window by creating mucoadhesive Acyclovir tablets. As a result, the issue of incomplete drug release and unpredictable absorption can be resolved by lengthening the retention time of the medication in the GIT.

ACKNOWLEDGMENT: Authors express their sincere gratitude to Faculty members of AISSMS College of Pharmacy, Pune, for continuous motivation, support, and guidance for research activity and for providing all required facilities to accomplish the entitled work.

CONFLICTS OF INTEREST:  The authors declare that they have no competing interests.