ABSTRACT: Nanoemulsions are the novel drug delivery system which allows sustained or controlled release of drug, biological active ingredient and genetic material. Nanoemulsion is a system consisting of oil, surfactant and an aqueous phase, which is an isotropically clear and thermo-dynamically or kinetically stable liquid solution, usually with droplet diameter within the range of 10 - 500 nm. Nanoemulsion is one of the supreme and valuable dosage forms with the appliance of nano-technology in pharmaceutical formulations. Very small size droplets of the nanoemulsion support better drug absorption and targeting. It not only improves the conventional emulsion systems but also opens new opportunities for other drugs to be designed more precisely with better bioavailability and accurate dosing leading to minimum side effects. The purpose of this research was to develop nanoemulsion of itraconazole that leads to higher dissolution rate and improved bioavailability. Itraconazole nanoemulsion was prepared by solvent displacement method and characterized by particle size determination, polydispersity index, drug content, entrapment efficiency and % cumulative release. The results obtained reveals that itraconazole nanoemulsion can be formulated with capryol 90 for better bioavailability of this hydrophobic drug.

INTRODUCTION: Itraconazole is the triazole antifungal agent used for cure of local and systemic fungal infection. Itraconazole is an extremely selective inhibitor of fungal cytochrome P-450 sterol C-14-α demethylation. The consequent loss of normal sterols correlates with the accretion of 14- α -methyl sterols in fungi and may be liable for the fungistatic activity of Itraconazole 1 - 2.

Compared with other conventional antifungal agents, Itraconazole has a reduced amount of nephrotoxicity than Amphotericin B and has wider spectrum of activity and well tolerated than other triazoles like ﬂuconazole, ravuconazole, and posaconazole 3 - 4.

Itraconazole is indicated for the treatment of fungal infections like blastomycosis, histoplasmosis, including chronic cavitary pulmonary disease and disseminated non-meningeal histoplasmosis, aspergillosis. However, the limited aqueous solubility of less than 1 μg/ml of Itraconazole and signiﬁcant hepatic ﬁrst pass metabolism restricts its bioavailability 5 - 7. Recent researches in pharmaceutical technology have focused on the design and development of novel drug delivery system (NDDS) that increase the efficiency of potential drugs 8. In this perspective, nano-emulsions have aroused a great interest as novel dosage forms, due to their extensive solubilising capability for both oil and water soluble compounds 9 - 10.

The invention of valuable formulations for drugs has been a main challenge, as drug effectiveness can be strictly restricted by instability or reduced solubility in the vehicle. One of the most capable technologies is the nanoemulsion drug delivery system, which can be applied to improve the solubility and bioavailability of lipophilic drugs 11 - 14. Nanoemulsions are nano sized emulsions that are used as drug carriers for attainment better delivery of therapeutic agents. This extremely developed technology is used for the systemic release of biologically active agents for controlled delivery and targeting 11, 15 - 17. These are the novel drug delivery system contains an emulsified oil and water system which ranges from 20 - 1000 nm 18.

These emulsions are easily produced in large quantities by mixing a water immiscible oil phase into an aqueous phase with high stress. These are prepared from lipid, surfactants, co-surfactants or co-solvents 19 - 20. They are thermodynamically and kinetically stable; non-irritant can be administered by various routes. They can be used as antimicrobial, used in mucosal vaccines, used as disinfectant, used in cancer therapy etc. 21. Formulation and development of poorly water soluble drug products keep on a challenge to formulation scientists mainly because of the rising new drug discovery programs 22. Proficiency of production and scale-up, state of being stable and improved bioavailability are fundamental properties of these formulations which have engrossed the attention of researchers 23.

Materials: Itraconazole was obtained as a gift sample from Glenmark Pharmaceuticals Ltd., New Delhi, Poloxamer 188 was obtained from BASF Germany, Tween 80 from RFCL ltd New Delhi, Capryol 90 was purchased from Shaila Enterprises Dehradun and Methanol was procured from Uttaranchal University Dehradun. Double distilled water was used for all experiment. All other chemicals used in the study were of analytical grade

Pseudo - Ternary Phase Diagram: On the basis of the solubility studies, Capryol 90 was selected as the oil phase. Poloxamer 188 and Tween 80 were selected as surfactant and co-surfactant, respectively. Distilled water was used as an aqueous phase. Surfactant and cosurfactant (Smix) were mixed at different mass ratios (3:1, 4:1, and 5:1). These ratios were chosen in increasing concentration of surfactant with respect to cosurfactant for a detailed study of the phase diagrams. For each phase diagram, oil and Smix at a specific ratio was mixed thoroughly at different mass ratios in different glass vials.

Different combinations of oil and Smix were made so that maximum ratios were covered for the study to delineate the boundaries of phases precisely formed in the phase diagrams. Pseudo ternary phase diagrams of oil, Smix and aqueous phase were developed using the aqueous titration method. Slow titration with aqueous phase was performed for each mass ratio of oil and Smix and visual observations were made for transparent and easily flow able o/w nanoemulsions. The physical state of the nanoemulsion was marked on a pseudo-three-component phase diagram with one axis representing the aqueous phase, the second one representing oil and the third representing a mixture of surfactant and cosurfactant at a fixed mass ratio.

Preparation of Nanoemulsion: The formulations were prepared by mixing appropriate amount of surfactant and cosurfactant and then oil part added, mix the formulation until completely dispersion occurs at room temperature. Then appropriate amount of drug was added and the final mixture was mixed by vortexing until a transparent solution was obtained. Formulations were prepared and characterised.

Measurement of Droplet Size and Polydispersity Index: The particle size and polydispersity index of nanoemulsion was measured by photon correlation spectroscopy using a Malvern Zetasizer. Samples were diluted appropriately with the aqueous phase of the formulation to get optimum kilo counts per second (Kcps) of 50 - 202.8 for measurements, and the pH of diluted samples ranged from 6.9 to 7.2. The measurements were carried out at 25 ºC in 75% - 100% intensity. The samples were analyzed.

Determination of Entrapment Efficiency: Entrapment efficiency (EE %) was determined by measuring the concentration of free drug (un-entrapped) in aqueous medium. This is the prime importance, as it influences the release characteristics of drug molecule. The amount of drug encapsulated per unit weight of nanoparticles is determined after separation of the entrapped drug from the nanoemulsion formulation:

Drug Content: Accurately weighed quantities of nanoemulsion were mixed with 100 ml of 0.1M HCl. The filtrate was analysed spectrophoto-metrically at 262 nm for drug content against 0.1 M HCl. Corresponding drug concentrations in the samples were calculated from the calibration plot generated by regression of the data. Drug content was calculated as detected amount of itraconazole with respect to theoretical amount of drug used for the preparation of nanoemulsion. Each determination was carried out in triplicate.

In-vitro Drug Release: In vitro percent drug release studies were carried out by using franz diffusion cell. Cellophane membrane was used as filtration purpose. Membrane was soaked in phosphate buffer for 12 hours before mounting it on cell. Itraconazole formulation was placed in the donor compartment and recipient compartment was filled with diffusion medium phosphate buffer pH 7.4. The content of the cell was stirred with the help of magnetic stirrer at 37ºC. Serial sampling were performed after 0.5, 1, 2, 3, 4, 5, 6 h. Fresh phosphate buffer was placed at receptor compartment to maintain constant volume. Samples were analyzed by spectrophotometrically at 262 nm.

Droplet Size Measurements: The mean droplet size and polydispersity index were calculated from intensity, volume and bimodal distribution assuming spherical particles. Nanoemulsion had various average droplet diameters between 50 to 1000 nm. A small droplet sizes are very much required for drug delivery. Polydispersity index (PI) is a measure of particle homogeneity and it varies from 0.0 to 1.0. The closer to zero the polydispersity value the more homogenous are the particles. Formulations showed their PI in between 0.436 to 0.653 that indicates acceptable homogeneity. 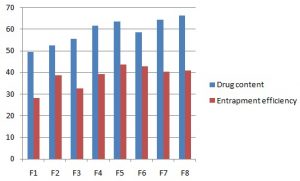 CONCLUSION: An attempt was made to shorten the problems allied with poor bioavailability of Itraconazole by preparing stable nanoemulsion. At present available marketed formulations include solution and capsules and having bioavailability around 30 to 55% only. Therefore lipid-based nanoemulsion was thus formulated to enhance the oral bioavailability by enhancing drug solubility. The current study showed that Itrconazole nanoemulsion formulation can be manufactured by capryol 90. From the above obtained results and it was concluded that formulations prepared by the lipid were in nano range and can be formulated. The tests carried out reveals that the mean droplet size was in the nanometre range, with good uniformity of diameter. The best formulation among all was found to be F3 on the basis of particle size (318.43 nm), polydispersibility index (0.436) and percent cumulative release (95.92%) having r2 value 0.986, therefore itraconazole nanoemulsion using capryol 90 as a lipid can be formulated.

ACKNOWLEDGEMENT: The authors wish to acknowledge the Uttaranchal University for providing the necessary facilities for preparation of this manuscript.

CONFLICT OF INTEREST: The authors hereby want to declare that there is no conflict of interest whatsoever in this publication.