ABSTRACT: Rosuvastatin is an antihyperlipidemic agent belonging to BCS class II Drugs with low aqueous solubility and high permeability. Objective: To formulate Rosuvastatin nanosuspension by Emulsification solvent diffusion technique by QbD approach and its evaluation. A 2² factorial design was employed to study the effect of independent variables [SLS (X1) and amount of PVP K -30(X2)] and dependent variables [total drug content (Y1) and PDI (Y2)]. Methods: Four nanosuspensions were prepared and evaluated for their saturation solubility, particle size, zeta potential, SEM, TEM, and in-vitro drug release study. Results: The particle size and PDI of all formulations were in a range of 215-38nm & 0.1-0.9, respectively. The drug content was ranged from 69 %-79%. From the design space F1 (SLS 4mg, PVPK-30, 25mg) and based on the mean particle size of 215nm, PDI of 0.2, drug content of 79%, and cumulative drug release 91%, F1 was selected as an optimum formulation with a zeta potential of -35.2mV. Conclusion: It can be concluded that Rosuvastatin formulated as nanosuspension formulation can enhance the dissolution and bioavailability.

INTRODUCTION: Solubility is one of the most important factors for achieving desired drug concentration in systemic circulation for therapeutic action. Poor aqueous solubility of drugs creates problems in the formulation as well as oral administration 1. The oral drug delivery system is usually known as one of the most convenient methods for the administration of drug formulations. For oral administration, the drug must be dissolved in GI fluids. About 40% of new chemical entities discovered to have low aqueous solubility or poor bioavailability 2.

Nanotechnology is one of the most upcoming key research areas in the modern scientific setup 3. Due to increased surface area, drug particles tend to have an enhanced dissolution after reduction to nanometre range 4. A pharmaceutical nano-suspension is outlined as a fine mixture, biphasic, dispersed, solid drug particulates in binary compound vehicle size below 1µm lacking any matrix material, steady by surface-active agent polymers.

Nanosuspension has been reported to enhance absorption & bioavailability. It may help to reduce the dose of the conventional oral dosage forms. Drug particle size reduction leads to an increase in the surface area & consequently in the rate of dissolution as described by Nernst-Brunner & Levich modification of the Noyes- Whitney equation 5.

Rosuvastatin (Rsn) belongs to a class statin and is employed to cut back plasma sterol levels. Rosuvastatin Calcium is a synthetic, anti-lipidemic agent that competitively inhibits hydroxyl methyl-glutaryl coenzyme. As it undergoes extensive first-pass metabolism in the liver, Rsn has a bioavailability of less than 20%, with liver being its primary site of action. It is important to enhance aqueous solubility, dissolution rate as it is considered as a valuable goal to improve therapeutic efficacy and thus improving bioavailability from its oral dosage forms 6.

High-pressure homogenization is a particle size reduction process usually applied in the pharmaceutical industry. With the high-pressure homogenization, the reduction of particle size from µm to nm improves in solubility and dissolution behaviour of drugs. Various surfactants can be used to avoid aggregation by covering the surface of the particles and supporting the electrostatic repulsion or steric stabilization between the particles, to enhance the solubility of the drug 7.

Pharmaceutical QbD is a systematic, scientific, risk-based, holistic, and proactive approach to pharmaceutical development that begins with predefined objectives and emphases product and process understanding and process control.

Differential Scanning Calorimetry (DSC) Analysis: The DSC analysis of pure drug, and the physical mixture was carried out on Shimadzu Corporation Japan to check any possible drug-excipients interaction. Samples were placed in aluminium pans and were crimped followed by heating at rate of 5°C/min from 25 to 450°C temperature under a Nitrogen gas flow 5.

Optimization of Formulation using 22 Factorial Design: Based on the principle of design of experiments, 2² factorial design was employed to investigate the effect of 2 independent factors. The 2 factors, amount of SLS (X1) & amount of PVPK-30 (X2) were varied, and the factor levels were suitably coded. The drug content (Y1) & Poly-dispersity Index (Y2) were taken as response variables. In this design, 2 factors were evaluated, each at 2 levels. Experimental trials were performed at all (F1-F4) possible combinations. All other formulation variables and processing variables were kept invariant throughout the study. Table 1 shows factorial combinations as per 22 factorial design 9.

Preparation of Nanosuspension: Nanosuspensions were prepared by the emulsification solvent diffusion technique. Rsn (20 mg) was dissolved in 10 mL Ethyl Acetate (organic phase) at room temperature. This solution was poured into 40 mL of water containing different amount of SLS, PVPK-30 & Poloxamer-188 maintained at room temperature, continuously stirring at 7500 rpm for 6 to 7 min by using High Shear Homogenizer. The addition of the organic phase was done at a rate of 0.5 mL/min. The solution was stirred using High Shear Homogenizer at 12000 rpm for 30 min. and then was subjected to sonication for 10 min. by using probe sonication. The suspension was then diluted with 60 mL of double distilled water and then stirred for 1 h to induce diffusion of the organic solvent into the aqueous phase. The prepared nano-suspension was kept at room temperature to evaporate the organic solvent.

Four formulations (F1 to f4) were formulated. The composition of formulations F1 to F4 is given in Table 2. Further, the formulations were transferred into an amber coloured bottle and stored in the refrigerator 9.

Saturation Solubility Studies: A known excess amount of drug Rsn, physical mixtures, and nanosuspension formulation were added to 10 mL each of phosphate buffer (6.8 pH). Samples were rotated at 20 rpm in a water bath at 25°C for 48 h. Samples were then filtered, suitably diluted, and analysed spectrophotometrically at 244nm.

Determination of Particle Size and Polydispersity Index: The particle size of all the formulations was determined by DLS using a particle size analyzer (Nanotrac R- 150 USA). Samples were prepared by diluting the small quantity of dry nanoparticles in double distilled water with constant stirring for 1 h and filtered through 0.45μm millipore filter to get the desired nanoparticle dispersion. The mean particle size of the nanosuspension was determined.

Drug Content: Drug-loaded Nanosuspension equivalent to 1mg was first dissolved in 1 mL methanol and was further diluted up to 10 mL with phosphate buffer pH 6.8 and stirred continuously for 2 h, and then the final suspension was ultra-centrifuged at 10,000 rpm for 30 min. The supernatant was taken, appropriate dilutions were made, and measured spectrophotometrically at 244 nm to get drug content 10, 11.

Statistical Optimization: Design expert software, version 11 was used to evaluate the quality of fit of the model. Based on the comparison with several statistical parameters, the best fit model was selected; parameters inclusive of R2-Coefficient of determination, adjusted R2, SS- the sum of squares, MS- Mean of square, DF- Degree of freedom, F-value- Fischer's ratio and p- probability was provided by DOE software.  For the identification of the significant effect of factors on response regression coefficient, the use of analysis of variance (ANOVA) was made, using response surface plots (Contour and 3D- Surface) the elucidation of the relationship between independent and dependent variables were made. The use of these plots was made to predict the responses of dependent variables at intermediate levels of independent variables and to study the response of the effects of various factors at given time. Finally, to identify the optimized formulation, a graphical optimization technique (Overlay plots) was used. The responses of experimental values were quan-titatively compared with responses of predicted values to validate the chosen experimental design.

Scanning Electron Microscopy (SEM): Particle morphology was observed using SEM JSM 6360 (JEOL Japan). The sample’s small drop of the suspension was air-dried followed by oven-dried & was mounted on double-faced adhesive tapes and coated with gold (20mÅ) under reduced pressure (0.001) for 5 min. using an ion sputtering device. The gold-coated samples were observed under the SEM, and photomicrographs of suitable magnifications were obtained 11.

Transmission Electron Microscopy (TEM): External morphology of prepared nanosuspension was determined using transmission electron micro-scopy. Samples of the nanosuspension were prepared by placing a drop onto a copper grid. Digital Micrograph and Soft Imaging Viewer software were used to perform the image capture and analysis, including particle size 10.

In-vitro Drug Release: The in-vitro release of pure Rsn and formulations (F1-F4) were determined using the dialysis bag diffusion technique. An accurately weighed amount of pure Rsn (5 mg) and nanosuspension equivalent to 5 mg of drug was transferred to a dialysis bag with a molecular weight cut off 12,000 - 14,000 Da and sealed. The sealed bag was then suspended in USP Type II apparatus containing 900 mL, phosphate buffer pH 6.8. The apparatus was runat a constant speed of 50 rpm, and the bath temperature was set at 37°C ±0.5°C. Aliquots of 5 ml of the sample were withdrawn at predetermined intervals from the receptor compartment, and the same was replaced with fresh buffer. The drug release was determined spectro-photometrically after dilution by measuring the absorbance at 244 nm using the phosphate buffer pH 6.8, as blank 10, 12. 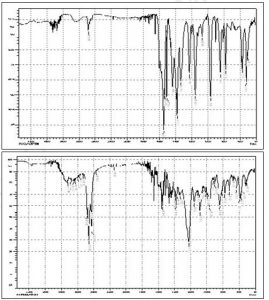 Formulation F1 showed an almost 10-fold increase in saturation solubility, which could be attributed to the reduction of drug particles in the nano ranges, in turn increasing the effective surface area of the particles.

The mean PDI value of nanosuspensions F1 to F4 varied in the range of 0.2 to 0.85, as shown in Table 4, indicating good results.

Drug Content:  The drug content of the formulated nanosuspension was found to be in the range of 62% to 79%, respectively, as shown in Table 4. Formulation F1 showed the maximum drug content i.e., 79%, in which 25 mg of PVPK-30 as a stabilizer and 4 mg of SLS as surfactant. 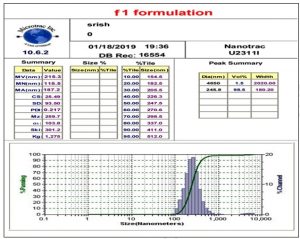 Optimization by 22 Factorial Design: The experimental runs, with independent variables and measured responses for the developed formulation are shown in the Table 5.

TABLE 5: COMPOSITION OF NANOSUSPENSION- VARIABLES AND RESPONSES AS PER DESIGN EXPERT 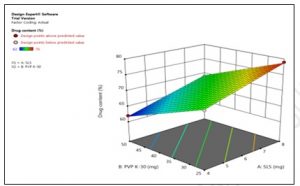 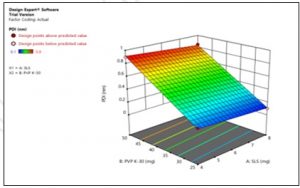 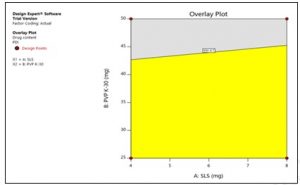 Zeta Potential: Fig. 7 shows the Zeta potential distribution of F1. Zeta Potential is an important parameter to analyze the long-term stability of the nanoparticles. Zeta Potential refers to the surface charge of the particles. It indicates the degree of repulsion between closely charged particles in the dispersion, which prevents aggregation of the particles. The Zeta potential of optimized F1 was found to be -35.2 Mv which indicates good stability of the formulation. This might be attributed to a surfactant that decreases the electrostatic repulsion between the particles and sterically stabilizes the nanoparticles by forming a coat around their surface. 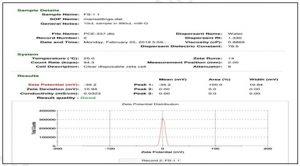 Scanning Electron Microscopy: Fig. 8 shows SEM image of Rsn nanosuspension F1. The drug particles precipitated with PVP K30 as a stabilizer are spherical in shape, and the size is 200 nm. The particles are discrete and in uniform size.

Transmission Electron Microscopy: TEM images of the optimized formulation F1 suggested that the formulations were in the nano-size range. TEM images of F1 showed that developed nanoparticles are spherical in shape, as shown in Fig. 9. 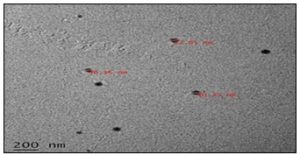 In-vitro Drug Release Studies: In-vitro dissolution studies of pure Rsn drug and formulations F1-F4 were carried out.  It is observed that drug release from nanosuspension formulation markedly increased as compared to the pure drug. The pure drug Rsn shows 19% cumulative drug release, whereas nanosuspension F1 shows 91%, F2 shows 85%, F3 shows 78%, and F4 shows 71% cumulative drug release at the end of the 60th min. The comparative drug release profiles of pure drug Rsn and formulations F1-F4 are shown in Fig. 10. It was observed that as the particle size increases, the release rate decreases, this is because smaller particles have a high surface area compared to their volume, and therefore the most of the drug will be at or near the particle surface and can be readily released. 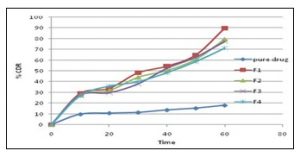 CONCLUSION: In the present study, Rsn nanosuspensions were successfully formulated by the emulsification solvent diffusion technique. The best nanosuspension formulation was found to be F1 with saturation solubility 0.89 mg/mL, particle size 215 nm, PDI 0.2, zeta potential -35.2mV, and Cumulative drug release of 91%. SEM and TEM images confirmed that the particle size of all the formulations was in nano range. It can be concluded that Rsn formulated as nanosuspension formulation can enhance the dissolution and bioavailability of the pure drug alone.

ACKNOWLEDGEMENT: The authors would like to thank the Basic Science Research Centre KAHER Belagavi and Apotex Research Private Ltd. Bangaluru for providing the drug sample.

CONFLICTS OF INTEREST: We declare no conflict of interest of any kind with anybody.

B. Sharannavar * and S. Sawant