FORMULATION AND EVALUATION OF NAPROXEN AND PANTOPRAZOLE MULTILAYERED TABLETS

FORMULATION AND EVALUATION OF NAPROXEN AND PANTOPRAZOLE MULTILAYERED TABLETS

ABSTRACT: Naproxen, a non-steroidal anti-inflammatory drug suggested for the long term treatment of disease conditions such as Rheumatoid Arthritis and Osteoarthritis poses an immediate risk of stomach ulceration. To avoid this risk, a proton pump inhibitor is often prescribed along with it. In the present study, Naproxen (500mg) is prepared in combination with Pantoprazole, a proton pump inhibitor as a multi-layer coated tablet. First, Naproxen is prepared as core tablet by wet granulation method. Then it is enteric coated to assist its delayed-release. Over this enteric coated tablet, Pantoprazole (20mg) drug layer is applied to get combination product. The prepared tablets were evaluated for physicochemical properties such as weight variation, hardness, friability, disintegration and drug content. The in-vitro drug release studies were conducted for Naproxen core tablets, Naproxen enteric coated tablets and multi-layered tablets in 0.1N HCl and 7.4 pH phosphate buffer. The analytical results obtained at several stages of preparation of the product were found to be satisfactory. The in-vitro drug release studies of Naproxen and Pantoprazole from multilayered tablets in 0.1N HCl and 7.4 pH phosphate buffer has shown that the release of drugs follow zero order kinetics.

Recently, a new generation of combination pharmaceutical products with one immediate-release component and one delayed-release component have received regulatory approval for marketing 1, 2. Through such dosage forms several advantages are seen but still some problems arise in preparation of this kind of dosage form such as physical incompatibility, chemical incompatibility etc. Therefore, the bilayer and multilayer tablets are known as a novel drug delivery system.

Arthritis is an inflammation of the joints. It can affect one joint or multiple joints. There are more than 100 different types of arthritis, with different causes and treatment methods. Two of the most common types are osteoarthritis (OA) and rheumatoid arthritis (RA). The most well-known therapy for Arthritis is the use of nonsteroidal anti-inflammatory drugs (NSAIDs) 3, 4.

Pantoprazole is a proton pump inhibitor drug that inhibits gastric acid secretion. It works on gastric parietal cells to irreversibly inhibit (H+/K+)-ATPase function and suppress the production of gastric acid 5, 6.

Studies showed that NSAID drugs in combination with PPI’s significantly reduce the incidence of gastric ulcers, regardless of NSAID dose, in at-risk patients, and is associated with improved UGI tolerability relative to enteric coated NSAID.1

Therefore the primary objectives of the study were to develop a suitable dosage form for two active ingredients, NSAID (in the enteric coated layer) and PPI and to overcome the under prescribed combination of these two drugs. In this study, the combination product of Naproxen and Pantoprazole is prepared by using multi-layer tablet coating technology. Naproxen core tablet is prepared by compression and then enteric coated. Upon this enteric coated tablet, Pantoprazole drug layer is applied. The number of ingredients were tried to reduce as much as possible which would make it a cost-effective formulation.

Preparation of Standard Curve of Pantoprazole: Calibration curve of pantoprazole was prepared in 0.1 N HCl. 10 mg of the drug was dissolved in 100 ml of 0.1N HCl to obtain a stock solution of concentration 100 μg/ml. This solution was then serially diluted with 0.1 N HCl to give solutions of concentration ranging from 5 μg/ml to 25 μg/ml. The absorbance of these solutions was measured at 285 nm using 0.1N HCl as blank and the standard curve was plotted to get the linearity and regression equation

Preparation of Naproxen Core tablets (D1 - D5) 7: Naproxen core tablets were prepared by direct compression method using Tablet Compression Machine (Elite Scientific and Equipments, Guntur). Povidone solution (1:7 ratio) in water was prepared by mixing with a stirrer into a glass vessel. Accurate quantities of Naproxen, diluent and disintegrant were added. Binder solution was added, mixed for 3-4 minutes to prepare wet mass. The wet mass was dried in a Hot air oven at 45°C for about 15 to 20 minutes. The granules were then obtained by rubbing the wet mass with mesh #20 and then collected followed by drying. Magnesium stearate was weighed, sieved through mesh #44 and added to the granules & mixed for 5 minutes. The granules were then compressed to get Naproxen Core tablets given in the Table 1.

Subcoating of Naproxen Core tablets: Based on the evaluation results of the core tablets, one formulation was chosen for further coatings. It was performed twice, first on the naproxen core tablets, then on the enteric coated tablets. The subcoating solution is prepared as per the formula given in the Table 2.

Enteric coating of sub-coated Core tablets 7: Enteric coating solution was prepared by taking Hydroxypropyl Methylcellulose as coating polymer and other ingredients as shown in the Table 3. It is then applied over sub-coated tablets of Naproxen

Evaluation of preformulation parameters: 7, 8, 9 All the formulations were evaluated for flow properties independently at both pre-granulation and pre-compression stages. The fixed funnel method was employed to measure the angle of repose. Bulk and tapped densities were determined by tapped density apparatus from which compressibility index and Hausner’s ratio values were calculated.

The percentage friability was determined using the formula,

Drug Content: Ten tablets were crushed in a mortar and following procedure carried out.

In-vitro Dissolution Studies: 7, 9 In vitro dissolution studies were conducted using Dissolution test apparatus DS 800 (Lab India, Mumbai). The dissolution specifications for all types of tablets tested were given in the table 5. For dissolution of Multi-layered tablets, 0.1N HCl was used as dissolution medium for the first two hours and 7.4 pH phosphate buffer for the remaining time. Samples of 5 mL were withdrawn at predetermined time intervals and replaced with 5 mL of fresh dissolution medium. The collected samples were diluted with dissolution fluid, wherever necessary, and were analyzed for Pantoprazole at 285 nm and Naproxen at 332 nm by using Double beam UV Visible Spectrophotometer SL 164 (Elico, Hyderabad).

TABLE 5: DISSOLUTION SPECIFICATIONS FOR ALL THE TYPES OF TABLETS

To analyze the mechanism of the drug release rate kinetics of the dosage form, the data obtained were plotted as: 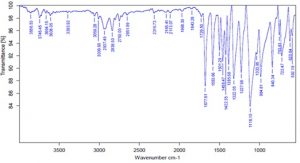 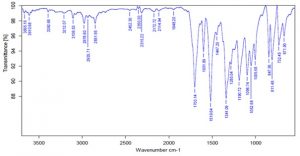 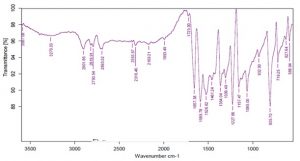 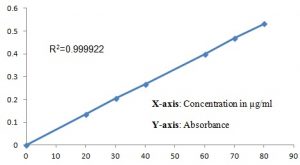 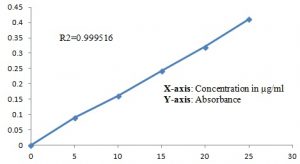 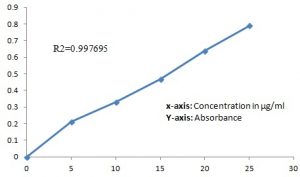 Preformulation Properties: The Pre-granulation and precompression flow properties such as Bulk density, Tapped density, Angle of Repose, Carr’s index and Hausner’s ratio values of all the five formulations (F1 - F5) are shown in the Tables 6 and 7.

Evaluation of Multi-layered tablets: The tablets were visually observed and free from defects such as lamination, chipping, and capping. The prepared tablets passed all the in-process tests. The values of Weight variation, Hardness, Friability of all the six multi-layered formulations are shown in Table 8, 9.

The drug content of both Naproxen and Pantoprazole in multilayered tablets was found to be 96.5% and 103.2% respectively. 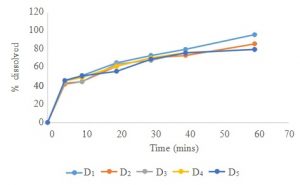 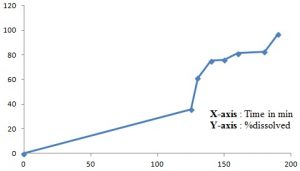 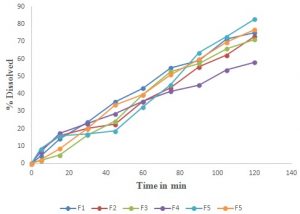 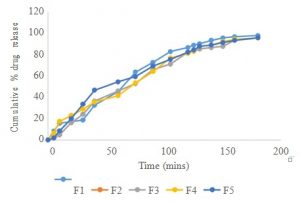 SUMMARY: Calibration curves were plotted for Naproxen and Pantoprazole in both the acidic and basic media (0.1 N HCl and 7.4 pH phosphate buffer). Five formulations D1 - D5 were prepared for Naproxen core tablets. The drug & excipients powders showed average to poor flow properties. Hence, granulation was performed. The granules showed improved flow properties. The optimized tablets had hardness of 3.5 kg/cm3. When dissolution was performed for formulations D1 to D5, the drug release studies has shown better results for formulation D1 (96%). So D1 was considered as optimized core formulation, on which further coatings were performed. The five different drug layering formulations (F1 – F5) were coated over the above layered tablets individually using three different alkalizing agents.

As the stability of Pantoprazole was a function of pH; and it rapidly degrades in acid media, we have added the alkalinizing agents into the formulation to create an alkaline environment of the enteric coating formulation. The formulations (F1 – F5) were subjected to dissolution studies in 0.1 N HCl and 7.4 pH phosphate buffer as per the specifications.

CONCLUSION: More than 50 million adults have Doctor-diagnosed Arthritis. Arthritis and other non-traumatic joint disorders are among the five most costly conditions among adults 18 and older. NSAIDs, which are the most common drugs suggested for Arthritis poses risk of stomach ulceration. To overcome this, a proton pump inhibitor is generally prescribed along, which finally lead to an increase in the cost of treatment. A combination product of desired drugs can both reduce the treatment cost and improve the patient compliance. In the present study, an attempt is made to formulate a combination product of Naproxen, a widely used NSAIDs, and Pantoprazole, a proton pump inhibitor that is capable of reducing gastric acid secretion, as a multi-layered tablet. The prepared tablets contain a Naproxen enteric coated core and Pantoprazole coated around this. The results proved that the prepared drug product releases both the drugs at desired sites and with acceptable rates of release.

ACKNOWLEDGEMENT: This project was supported by Vignan Pharmacy College, Vadlamudi. Eventually we express our thanks to memorable company Alembic Pharma Limited for providing us the drugs.

CONFLICT OF INTEREST: No conflicts of interest.