Preethi Sudheer *1 and Ramakrishna Shabaraya A. 2

INTRODUCTION: Drug delivery systems (DDS) that can precisely control the release rates or target drugs to a specific body site have had an enormous impact on the healthcare system. Carrier technology offers an intelligent approach for drug delivery by coupling the drug to a carrier particle such as microspheres, nanoparticles, liposomes, etc. which modulates the release and absorption characteristics of the drug. Microspheres constitute an important part of these particulate DDS by virtue of their small size and efficient carrier characteristics. However, the success of these novel DDS is limited due to their short residence time at the site of absorption.

It would, therefore, be advantageous to have means for providing an intimate contact of the DDS with the absorbing membranes. It can be achieved by coupling bioadhesion characteristics to microspheres and developing novel delivery systems referred to as “bioadhesive microspheres”. 1

Mucoadhesive polymers are used to immobilize a drug delivery device on a specific site for targeted release and optimal drug delivery due to intimacy and duration of contact. 2

Chitosan is a linear polysaccharide composed of randomly distributed β-(1-4)-linked D-glucosamine and N-acetyl-D-glucosamine units. Commercially, it is produced by the exhaustive deacetylation of chitin (>60%), a structural element in the exoskeleton of crustaceans and insects, which is the second most abundant natural biopolymer after cellulose. Chitosan, the N-deacetylated product of the polysaccharide chitin, is an interesting biopolymer to prepare microspheres owing to its unique polymeric cationic character, good biocompatibility, non-toxicity, biodegradability and its mucoadhesive and absorption-enhancing effect.3

Nifedipine, a calcium channel blocking agent, is frequently used for the treatment of angina pectoris and hypertension. Nifedipine is absorbed rapidly in gastrointestinal tract after an oral administration with a bioavailability of 45% to 75% due to its significant first-pass metabolism. Conventional preparations, which would increase heart rate reflectly and activate the sympathetic nervous system, are not convenient clinically. Nifedipine sustained-release preparation is relatively safe, well in compliance with mild adverse effects owing to its less variation of blood concentration and longer maintenance time.4

Chitosan with >85% deacetylation was supplied from CIFL ltd, Cochin. Nifedipine was a gift samples from M/S Micro labs ltd, Bangalore. Other reagents used were of analytical grade from local suppliers. Porcine intestine was obtained from slaughter house. In vivo animal studies were conducted after the ethical clearance from the institutional ethical clearance committee.

The microsphres were prepared by o/w/o double emulsion cross linking method. In this method, initially 1% w/v chitosan solution in 1% v/v acetic acid was prepared by stirring for 4-5 hrs. Nifedipine was dissolved in 1:1 ratio of methanol: acetone mixture, and the resultant solution was added to chitosan solution under mechanical stirring for 2 hrs, followed by gluteraldehyde (25%) was added as rigidising agent. The resultant microparticulate suspension was continuous stirred overnight; the resultant microsphers were filtered by whatman filter paper, washed with petroleum ether and dried. 5

TABLE 1: COMPOSITION OF MICROSPHERS OF NIFEDIPINE

Microspheres equivalent to 100 mg of the drug was crushed, dissolved in methanol, made up to volume with methanol, and diluted to Beer’s concentration, and absorbance was measured at 235 nm.7

Microspheres equivalent to 100 mg of the drug was taken, washed with 3x 10 ml methanol, the resultant microspheres were dried, was crushed, dissolved in methanol, made up to volume with methanol, and diluted to Beer’s concentration, and measured absorbance at 235 nm.

The particle size distribution studies were carried out by using optical microscopic method using stage micrometer. The microsphers were taken on a glass slide, added one drop of liquid paraffin and checked under optical microscope under 100X magnification. Particle size of 100 particles was measured.

The surface morphology of the microsphres was studied by using JSM 840 A, scanning electron microscope, Jeol, Japan. The samples were analysed after they haven gold sputtered using 25nm film thickness. 7

In vitro drug release studies were carried out by USP type I apparatus, phosphate buffer pH 7.2wasusedasdissolutionmedium. The volume of dissolution medium was 900 ml and maintained at 37±0.50 C at a rotation speed of 50 rpm. Microsphres equivalent of 100 mg of drug was placed into the dissolution medium. and the release of the drug from microspheres were studied by using collecting the samples at regular time intervals, replacing with  fresh buffer, concentration of drug in each sample was measured UV spectrophotometrically at 235 nm.9

In-vitro diffusion studies were carried out by using Franz- diffusion cell using cellophane membrane as model membrane. Microsphres equivalent to 100 mg of the drug was taken on a treated cellophane membrane, which was placed b/n the donor compartment and the receptor compartment of the diffusion cell assembly. The receptor compartment is filled with 25 ml of phosphate as receptor fluid. The microsphres were wetted by 1 ml phosphate buffer pH 7.2. The drug diffusion was studied by collecting receptor fluid at regular time intervals, replacing with fresh buffer solution to maintain sink conditions. The samples were analysed UV spectrophotometrically at 235 nm.9

The ex-vivo permeation studies carried out by using porcine intestinal mucosa. The fresh intestine was collected, which was cut through lumen. The microsphers equivalent to 100 mg of the drug was taken on mucosal side of the intestine, which was placed b/n donor and receptor compartment; in such a way that mucosal side is facing towards donor compartment. The receptor compartment is filled with 25 ml of phosphate buffer pH 7.2 as receptor fluid. The drug permeation is studied by using collection of   receptor fluid at regular time intervals, and analysed for drug content UV spectrophotometrically at 235 nm.10

The mucoadhesion time was determined by using porcine intestinal mucosa. The microspheres were placed on to the mucosal side of the intestine, with minimum pressure; the mucosa was tied to a glass slide, which in turn was tied to USP disintegration test basket rack assembly, the entire assembly was allowed to move up and down in 900 ml of phosphate buffer. The time required for microsphres to detach from the mucosa is determined.11

IR studies were carried out for both pure drug and microsphres using KBr pellet technique to see, if any   physicochemical interaction b/n pure drug and excipients.

The optimized formulations of microsphere using chitosan polymer, which showed the best results in terms of mucoadhesive properties were selected for in -vivo study.

Albino rabbits weighing 1.5–2.5 kg (housed in a temperature (22±1 °C) and relative humidity (55±10%) controlled room) were used in the experiments. The rabbits were maintained in accordance with the principles declared by the Committee for the Purpose of Control and Supervision of Experiments on Animals (CPCSEA, Government of India). They were housed with free access to food and water, except for the final 12 h before experimentation.

Each group consisted   of 3 animals with group 1 was treated with best formula of Nifedipine 100 mg of microspheres were given as oral suspension. Group 2 with Nifedipien pure drug suspension 10mg/kg of body weight. After a single administration of above formulations, 2.5 ml of blood samples were collected from the marginal ear vein at, 0.5, 1, 2, 4 and 8 h time points into heparinised collection tubes. The blood was immediately centrifuged at 1000 rpmfor 10 min at cooling temperature. The supernatant plasma layer was separated and stored at -200 C until analyzed.

RP-HPLC conditions The HPLC system comprised a Shimadzu LC-ATVP HPLC pump, a Shimadzu SPD-10A UV/VIS detector and a Rheodyne 7725i sample injector fitted with a 20 µL sample loop. The detector was operated at wavelength of 235 nm and 238 nm. A Phenomenex 100 Ao RP-C18 reversed phase column (5µ, 250mmx 4.6 mm ID). The mobile phase comprised 0.01M of Phosphate buffer (Potassium dihydrogen phosphate)and Methanol (40:60 v/v) the pH was adjusted to 4.5 with 10% ortho phosphoric acid. Analysis was run at a flow rate of 1.0 ml/min and the detection wavelength was 235nm for nifedipine.11, 12

In the present study nifedipine loaded micro spheres were prepared by using chitosan polymer by o/w/o emulsification method.  Ten formulations of micro spheres were prepared by using various ratios of drug to polymer ranging from 1:1 to 1:5, and also by varying concentration of cross linking agent gluteraldehyde. It was found that increasing concentration of polymer had improved the physical properties, free flowing nature and spherical properties.  (Table 1). The drug content of formulation ranged b/n 73.34+/1.23% to 80.60+/-2.12% and drug loading ranged b/n 68.65+/-0.09%-79.56+/-0.87%. The polymer concentration had little effect on drug content and drug loading. And also increased concentration of gluteraldehyde had shown an effect on increased drug loading, may be due to the rigidising properties of gluteraldehyde. The mucoadhesion time ranged b/n 423 sec- 478 sec.  (Table 2)

The obtained microspheres were characterised by using camera lucida, all the microsphers spherical shape, but the formula FCN6 was selected on the basis of drug content also was more or less spherical particle with size distribution b/n 10- 800 μm. (Fig 1). 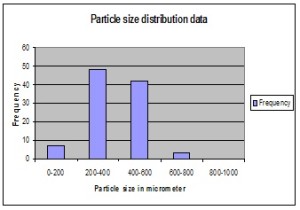 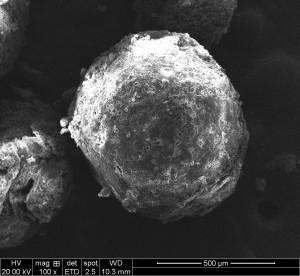 In–Vitro release profile  of the selected formula (FCN6)  was studied against pure drug profile in phosphate buffer pH 7.2, where as microsphers were showing a controlled, but an enhanced drug release pattern in comparison with pure drug. About 80% of the drug was released in a time period of 10hrs. This would be due to from solubilising property of chitosan. (Fig.3) 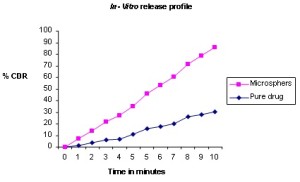 The release data was fitted into various kinetic model, it was seen that, the release profile was fitted to zero order kinetic profile with R2 valueof 0.9923, showed Korsmeyre-Peppas model mechanism with n values of 0.8169.

The pure sample of nifedipine was showing a slow diffusion profile with 30.34 % 10 hrs, whereas drug release from  microspheres were showing a release up to 55.55% which may be due to added solubility enhancement property of chitosan polymer. (Fig.4) 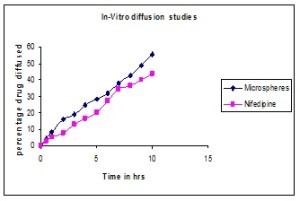 The ex-vivo permeation studies using porcine intestinal mucosal membrane indicated  drug permeation of 33% which was similar to in- vitro  diffusion  profile, where as the  microsphers had shown a controlled  release pattern and about 48.67 % drug was permeated  in 10 hrs. (Fig. 5)

Extent of mucoadhesion was studied by using modified disintegration test apparatus was ranged b/n 423-478 sec. This increase in extent of mucoadhesion may be due to uneven/ rough surface and also due to particle size in micrometer range would have contributed to effective surface area of contact. 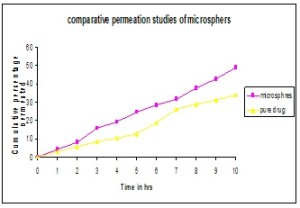 The IR studies showed   the principal peaks which was present in the pure drug was also present in selected formula of microsphers which indicates, there was no significant interaction b/n the dug and exicipients. Nifedipine exhibited  characteristic peak at the regions of 3329 due to amine group , 3093 due to aromatic group, 2947 due to methyl group, c-c symmetrical n band, 1685  aryl carboxylic acid, C=O stretching vibration, 1633 due to pyridine ring vibration, 1226 due to carbonyl group-C-O or O-H  and  aryl nitro C-N due stretching vibration.

CONCLUSIONS: Mucoadhesive microsphers of nifedipine using chitosan was prepared using emulsification technique. The microsphres with slightly uneven surface obtained could have contributed to the increased mucoadhesive properties. o/w/o method is found to be method for good drug loading.  Drug interaction studies such as IR indicated no appreciable interaction. The in- vitro release profiles indicated controlled, but an enhanced drug release from microsphers. In -vivo studies too indicated a   controlled release of the drug in comparison with an oral suspension of drug.

ACKNOWLEDGEMENTS: The authors would like to acknowledge CIFL Cochin for providing gift sample of chitosan, IISC, Bangalore for carrying SEM Studies.

Preethi Sudheer * and Ramakrishna Shabaraya A.