ABSTRACT: The objective of this work was to develop non effervescent floating tablets by Melt granulation technique. Cefuroxime axetil is having shorter half life of 80 min and hydrolyzed by intestinal esterase to the non absorbable cefuroxime in the gut lumen and is, therefore, suspected as a possible cause of incomplete bioavailability. So there is a need to increase the gastric residence time of the drug. These tablets were prepared by different meltable binders such as paraffin wax, bees wax and carnauba wax as release retardants. Various formulations have been developed by varying concentration of waxes, buoyancing agent and disintegrating agent. The FTIR spectrum indicated the stability and compatability of drug and excipients. All the formulations (F1 to F9) were evaluated for weight variation, hardness, friability, buoyancy studies and In-vitro drug release studies. Among all the formulations, dissolution studies data indicated that F9 formulation exhibited good drug release 0f 91.67% and has shown floating time more than 24hrs with a lag time of 30 min. The mechanism of drug release of NEF tablets of Cefuroxime Axetil was determined by the application of Korsmeyer-Peppas model, Higuchi’s model, Zero order and first order kinetics. From the drug release plots it was observed that the drug release was following zero order kinetics and non – fickian diffusion (n value 0.5 to 1) fitting in to Korsmeyer -Peppas equation. This indicates that drug release depends on erosion of waxes.

INTRODUCTION: Gastroretentive drug delivery is an approach to prolong gastric residence time, thereby targeting site-specific drug release in the upper GIT for local or systemic effects. Drugs that are easily absorbed from gastro intestinal tract and having shorter half-lives are quickly eliminated. So for this type of drugs gastroretentive drug delivery systems have been designed to retain the system in gastro intestinal tract for longer time.

While the system is floating on the gastric contents, the drug is released slowly at the desired rate 1, 2. Cefuroxime is a broad spectrum, second generation and β - lactum antibiotic. Since cefuroxime is not absorbed orally, cefuroxime axetil an orally absorbed prodrug of cefuroxime is used in the treatment of commonly acquired infections. It is active against both gram positive and gram negative organisms.

It has a half life of 80 min and bioavailability of 30 to 40% when taken on empty stomach and 5 to 60% taken after food. Cefuroxime Axetil is absorbed from the gastrointestinal tract & rapidly hydrolyzed by non specific esterase’s in intestinal mucosa & blood to non absorbable cefuroxime. The axetil moiety is metabolized to acetaldehyde & acetic acid. So this may be cause for incomplete bioavailability. All the cephalosporins inhibit cell wall production and selective inhibitor of peptidoglycon synthesis. The initially drug binds to the cell receptors called penicillin binding proteins. After a beta lactum antibiotic has bound to these receptors, the transpeptidation reaction is inhibited and peptidoglycon synthesis is blocked.  Finally bacterial lysis takes place 3, 4. In order to increase bioavailability and gastric residence time is increased by formulating into non effervescent floating systems. So meltable binders which are having low density i.e. less than gastric fluid (1.004g/cm3). Based on low density property meltable binders were selected.

10 mg Cefuroxime axetil was accurately weighed and transferred to 10ml volumetric flask. It was dissolved in methanol. Then from the above stock required concentrations were taken and diluted with 0.1N HCl. The absorbances were measured against 0.1NHCl as blank at 280nm using UV-spectrophotometer. Coefficient of correlation was found to be 0.998 4, 5. 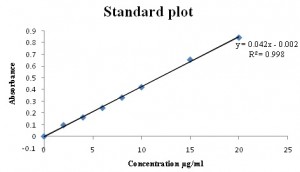 IR spectroscopy for pure drug and combination of drug and excipients:

The spectrum analysis of pure drug and combination of drug and waxes (1:1) were analyzed by FTIR. FTIR spectra were recorded using potassium bromide (KBr) disk method. KBr disk was prepared by mixing the sample with KBr by compacting in a hydrostatic press under vacuum at 6-8 tons pressure. The resulted disk was mounted in a suitable holder in IR Spectrophotometer and it was recorded from 4000cm-1 to 400cm-1.The spectrum was observed for characteristic peaks of Cefuroxime Axetil and waxes 6.

Required quantity of Cefuroxime axetil and lactose was weighed and gradually added to the molten wax with continuous stirring. To this mass lactose was added. Then solidified mass was pulverized in motar and sieved through 30 # screen to form granules. Then sodium bicarbonate was added and mixed well. Then to this magnesium stearate and talc are added and mixed well. The granules were compressed into tablet form by using 8mm to 12mm punches 6, 7, 8.

The pure drug and granules were evaluated for angle of repose, bulk density, tapped density, Carr’s index and Hausner’s ratio

This is the maximum angle possible between the surface of a powder pile and the horizontal plane. It is the characteristic related to inter-particulate friction (or) resistance to movement between particles. Angle of repose was carried out by funnel method 9, 10, 11.

Angle of repose is calculated by the formula

Where θ =angle of repose, h =the height of the pile, r= radius of the pile.

It is determined by pouring drug or granules into 50ml graduated cylinder and the volume (V) occupied is noted 9, 10. Bulk density is calculated as

Pure drug or granules were poured into 50ml graduated cylinder and it was tapped for affixed time (around 100 taps).The minimum volume (V) occupied in the cylinder was measured 9, 10.

Tapped density was calculated by the formula

It is an indirect method for measurement of bulk density, size, shape, surface area and cohesiveness of the material 9, 10.

It is determined by Carr’s compressibility index.

Hausner’s ratio is a number that is correlated to flowability of a powder 9, 10, 11.

It is calculated by the formula

The prepared granules were evaluated for weight variation, hardness, friability and buoyancy studies.

Twenty tablets were selected randomly and they were weighed individually and the weights of tablets were compared with mean weight. In this method, not more than two tablets should have a deviation greater than pharmacopoeia limits ±5 % of the weight 12, 13.

For each formulation, hardness of 6 tablets was measured using Monsanto hardness tester. A tablet was placed between the two anvils of hardness tester, force was applied to the anvils and the crushing strength that causes the tablet to break was recorded in Kg/cm2.Three tablets were tested and average reading was noted12, 13.

Friability is calculated by the formula

In-vitro drug release of the tablets (n=3) was carried out using type-II dissolution apparatus (paddle type). 900 ml of 0.1N HCl dissolution medium was prepared and transferred in to dissolution baskets. The medium was maintained at temperature of 37°c±5°c and paddles were operated at 50 rpm. The tablets were then placed in each dissolution basket. A sample (5ml) of the solution was withdrawn from dissolution apparatus at predetermined time intervals (0.5, 1, 2, 3 …12 hrs) and the samples were replaced with 5ml of 0.1 N HCl in order to maintain sink conditions. The collected samples were then analyzed for drug release against 0.1N HCl as blank using UV-Visible spectrophotometer at 280 nm14, 15, 16.

An accelerated stability study was conducted for the selected formulation for a period of one month  at 40°C ± 2°C, 75% ± 5%RH. After one month tablets were evaluated for appearance and in-vitro drug release and release rate kinetics13.

FTIR: Fourier transform infrared spectroscopy for drug, meltable binders and granules were performed. The drug and waxes retains all the peaks. Hence there was no interaction between drug and waxes. The other excipients used in the formulation are already compatible with Cefuroxime Axetil 5, 7. 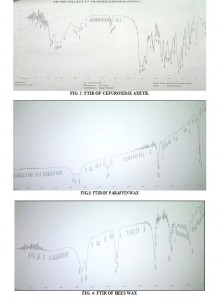 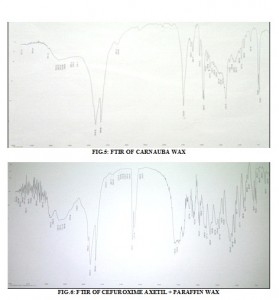 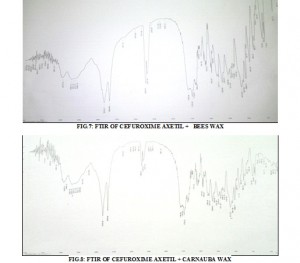 Various formulations of non effervescent floating tablets of Cefuroxime Axetil were prepared mentioned in Table 1 and were evaluated for weight variation, hardness, friability and buoyancy mentioned in the Table 3. All the parameters for all the formulations were within the limits.

Buoyancy studies were performed by immersing the tablet in 0.1 N HCl and the tablets remained buoyant without disintegration shown in Fig.9. From the results it can be concluded that F7, F8, F9 showed lag time of 30 min and total floating time more than 24 hrs.

According to the formulations mentioned in Table 1 NEF tablets of Cefuroxime Axetil were prepared and were subjected for dissolution studies. Various formulations were developed by using different waxes. In order to select the wax F1, F2 and F3 formulations are done by using 33.3% of paraffin wax, bees wax and carnauba wax. But due to the high concentration of waxes F1, F2, F3 has shown drug release of 5.82%, 8.42% and 12.71% in 12 hrs. From these three waxes F3 formulation containing carnauba wax has shown optimum release.

Carnauba wax is less dense in nature, hence the tablets should have good floating property. But due to the hydrophobic nature of carnauba wax the wetting process of the tablet usually gets delayed which influences the floating of the tablet. In order to achieve the floating sodium bicarbonate is added to the preparation. When wetting process, occurs a reaction between the sodium bicarbonate present in the formulation and HCl present in the surrounding dissolution medium. As a result, it leads to the evolution of CO2 gas, causing buoyancy to the tablet. This NEF tablet of Cefuroxime Axetil have shown lag time of 30 min and floating time was observed to be more than 24hrs.

As compared with the marketed tablets the drug release was prolonged for the prepared formulation.

The mechanism of drug release of NEF tablets of Cefuroxime Axetil was determined by the application of Korsmeyer-Peppas model, Higuchi’s model, Zero order and first order kinetics shown in Table 5 and respective plots of F3 to F9 formulations shown in Fig. 11 to 14. The correlation coefficient (r2) values are from 0.896 to 0.992. From the drug release plots it was observed that the drug release was following zero order kinetics and non – fickian diffusion (n value 0.5 to 1) fitting in to Korsmeyer-Peppas equation. This indicates that drug release depends on erosion of waxes.

Stability studies: An accelerated stability study was conducted for the selected formulation F9 for a period of one month  at 40°C ± 2°C, 75% ± 5%RH. There was no change in physical appearance, color, hardness, weight variation and content uniformity. The samples were collected were collected after one month and were evaluated. Results given in Table 6 for F9 showed that there was no change in drug release and the formulation was stable.

Formulation was analyzed at the end of one month for assay and dissolution studies. In vitro dissolution profile and assay showed that there was no significant change in the release rate of the drug from optimized tablet at the end of one month. From all the above results it can be made clear that the attempt made to formulate non effervescent floating tablets was achieved. In-vitro drug release comparative plots of before and after stability are shown in Fig. 15. The correlation coefficient (r2) values are from 0.972 to 0.979. From the drug release plots it was observed that the drug release was following zero order kinetics and non – fickian diffusion (n value 0.5 to 1) fitting in to Korsmeyer-Peppas equation. This indicates that drug release depends on erosion of wax. 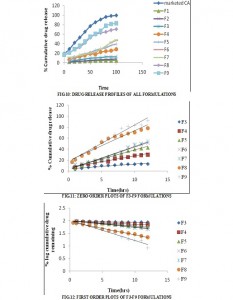 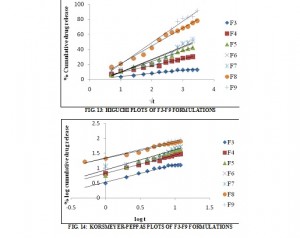 TABLE 6:  EVALUATION OF NEF TABLETS OF CEFUROXIME AXETIL AFTER ONE MONTH STABILITY STUDY

TABLE 7:  IN VITRO DISSOLUTION STUDY OF F9 FORMULATION AFTER ONE MONTH STABILITY STUDY 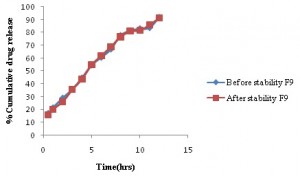 FIG.15: COMPARATIVE DRUG RELEASE PROFILE OF F9 FORMULATION BEFORE AND AFTER STABILITY STUDIES

Among all the formulations prepared, F9 formulation had shown sustained drug release, i.e. 91.678% in 12 hrs and it has also showed floating time more than 24hrs. Thus, this was considered to be the best among all the nine formulations. Hence it shows the suitability of caurnauba wax as a polymer for preparing non effervescent gastric floating tablets.

This best formulation (F9) was therefore subjected for stability studies. From the stability data, it was confirmed that the formulation was stable without any degradation. And also the in-vitro drug release as well as floating time for this F9 formulation was observed to be same when conducted again after a time period of 30 days.