In the present work, oral dispersible tablets of cinnarizine were prepared by direct compression method with a view to enhance patient’s compliance. Five different superdisintegrants viz. crosspovidone, sodium starch glycolate, crosscarmellose sodium and low-substituted hydroxypropylcellulose (L-HPC) and pregelatinized starch were used along with microcrystalline cellulose (Avicel PH 102) and directly compressible mannitol (pearlitol SD-200) which enhances the mouth feel.  Fifteen formulations having superdisintegrants at different concentration levels were prepared. These tablets were evaluated for drug content, weight variation, friability, hardness, wetting time and in vitro disintegration time. Among the formulations tablets of batch F9 containing crosspovidone (at 4.5% level) showed superior organoleptic properties along with excellent in-vitro disintegration time and drug release as compared to other formulations. It was concluded that superdisintegrants addition technique is a useful method for preparing oral dispersible tablets by direct compression method.

INTRODUCTION: In a society in which people are living longer, drug dosage forms that can improve elderly patient compliance are needed. Many elderly patients find it difficult to swallow tablets or capsules. In order to solve this problem, the development of solid dosage form that disintegrates rapidly or dissolves even when taken orally without water are being formulated.  This dosage form is known as oral dispersible tablets 1, 2. The term ‘‘Oral Dispersible Tablet” appears in the European Pharmacopoeia defined as ‘‘uncovered tablet for buccal cavity, where it disperses before ingestion” 3.

The solid ODT dosage form turns into a soft paste or liquid form for easy swallowing, and thus it is free of suffocation risk. ODTs are beneficial for paediatric, geriatric, schizophrenic, bedridden patients and those with Parkinsonism or developmentally disabled patients with persistent nausea and patients who have little or no access to water. ODT will avoid missing out of dose even during travelling, busy or other situations where there is no access to water 4, 5, 6, 7.

There have been some methods to prepare the rapidly disintegrating tablets like Lyophilisation or molding, and compressing wet powders to construct highly porous structure.   However, these methods required the particular machines and are time consuming techniques.  The hardness of the products was not enough to stand up for process of packaging and transportation. Therefore, direct compression is a convenient and cheap way to produce tablets with sufficient structural integrity 8. The advantages of direct compression are low manufacturing costs, high mechanical integrity of the tablets, good stability, accurate dosing, small packaging size, and easy handling and ease of administration. Therefore, direct-compression appears to be a better option for the manufacturing of oral dispersible tablets.  The fast disintegrating tablets prepared by direct compression method, in general, are based on the action established by superdisintegrants such as crosscarmellose sodium, crosspovidone and sodium starch glycolate. The effect of functionality differences of the superdisintegrants on tablet disintegration has been studied 9, 10.

Cinnarizine is an H1-receptor antagonist. It is widely used in the treatment of motion sickness, vomiting and vertigo.  It is water insoluble and tasteless drug.  Hence it was selected as a model drug for the preparation of oral dispersible tablets 11.

The superdisintegrants such as crosscarmellose sodium, crosspovidone, low-substituted hydroxypropylcellulose (L-HPC), pregelatinized starch and sodium starch glycolate in varying concentrations (1.5-4.5%) were used to develop the tablets. All ingredients (shown in Table 1) were passed through mesh no 60. All the ingredients were co-ground in a pestle motor for 5 minutes.  The mixed blend was compressed  into tablets using tablet machine Rimek mini press-1, Karnavati Engineering Ltd, Mehsana, Gujarat (punches flat-faced, 8 mm diameter) to prepare 200 mg tablets 12.

Preformulation studies: The FTIR spectra were obtained using KBr pellet technique on a Shimadzu 8400s FTIR spectrophotometer. The scanning range was 400-4000 cm-1 and the resolution was 1 cm-1.7

Compressibility Index: The simplest method of measurement of free flow of powder is compressibility, an indication of the ease with which material can be induced to flow and is given by compressibility index (I) which is calculated as follows,

The value below 15% indicates a powder which usually gives rise to excellent flow characteristics, whereas above 25% indicate poor flowability.

Hausner’s Ratio (H): This is an indirect index of ease of powder flow. It is calculated by the following formula,

Uniformity of weight 14: The test was carried out according to the US pharmacopoeia. Twenty tablets, of each formulation were individually weighed and the mean of tablet weights was calculated. Results are presented as mean value± standard deviation (SD).

Hardness 15: The fracture strength, which is defined as the force required breaking a tablet by radial compression was measured with a tablet hardness tester (Monsanto hardness tester)

Friability 16: The friability of sample of six tablets ware measured using a Roche Friabilator (Electrolab EF-2, USP). Six pre-weighed tablets were rotated at 25 rpm for 4 minutes. The tablets were then reweighed after removal of fine’s using 60 mesh screens and the percentage of weight loss was calculated.

Wetting time 17: A piece of tissue paper folded twice was placed in a small petri dish containing 6 ml of water. A tablet was put on the paper and the time required for complete wetting was measured. 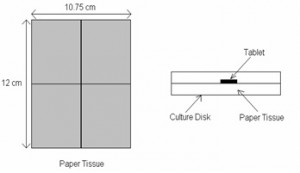 Drug content uniformity 15: The prepared 10 tablets were powdered and the blend equivalent to 25 mg of cinnarizine was weighed and dissolved in 100ml of 0.1 N HCl solutions. Solution was filtered, and 1ml of first stock solution was diluted up to 100ml with 0.1N HCl. Drug content was analyzed spectrophotometerically at 253.2nm. Each sample was analyzed in triplicate. 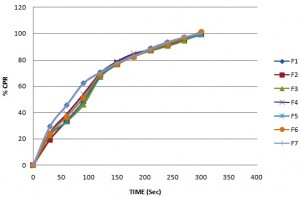 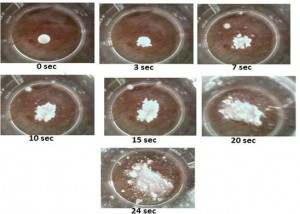 In vitro dissolution studies: ODTs were evaluated for dissolution behaviour. Dissolution tests used the USP apparatus 2, paddle types (Electrolab, Mumbai, India.). Dissolution was carried out with the rotation speed of 50 rpm using 500 ml of 0.1 N HCl as the dissolution medium maintained at a temperature of 37±0.5oC 19. Samples were withdrawn at predetermined time interval and diluted suitably and analyzed at 253.2 nm for cumulative drug release using Schimadzu UV-Visible spectrophotometer. The dissolution experiments were conducted in triplicate, shown in Fig. 4.

RESULTS AND DISCUSSION: All the formulations were prepared by direct compression technique.  The data obtained from pre-compression parameters such as bulk density, tapped density, Hausner’s ratio, Carr’s index and angle of repose is given in Table 2 and is found to be within acceptable pharmacopoeia limits. Post-compression parameters like hardness, friability, weight variation, drug content, wetting time, in vitro dissolution profile (Fig.2 &3 ) indicated that.

According to the pharmacopoeial standards the dispersible tablet must disintegrate within 3 min. But all formulated batches have shown very low disintegration time between 34.12±1.32 to 177.61±1.77 seconds indicating suitability of formulation for fast dissolving tablet.  Wetting time is found to be less for the formulation F9 containing super disintegration agent crosspovidone (at 4.5% level) as compared to other formulations. The in vitro dissolution profile (Fig.1) indicated that among the all formulations, faster and maximum drug release was obtained from formulation F9 due to shorter wetting time.

CONCLUSION: Oral dispersible tablets (ODT) of Cinnarizine are successfully prepared by using direct compression method.   Undoubtedly the availability of various technologies and the manifold advantages of ODT will surely enhance the patient compliance, low dosing, and rapid onset of action, increased bioavailability, low side effect, good stability, and its popularity in the near future. From the study, it can be concluded that direct compression method showed better disintegration and drug release. The prepared tablets disintegrate within few seconds without need of water; thereby enhance the absorption leading to its increased bioavailability. Direct compression technique would be an effective alternative approach compared with the use of more expensive adjuvant in the formulation of oral dispersible tablets.