FORMULATION AND EVALUATION OF ORODISPERSIBLE TABLET OF BISOPROLOL FUMARATE

FORMULATION AND EVALUATION OF ORODISPERSIBLE TABLET OF BISOPROLOL FUMARATE

ABSTRACT: The main objective of this research work was to formulate and evaluate an Orodispersible tablet of Bisoprolol Fumarate for the treatment of hypertension and coronary artery disease. Formulation was designed using systat software version 13.2. 32 full factorial design was applied, in which two variables were varied at three levels. The tablets of Bisoprolol Fumarate were developed by direct compression method. The prepared tablets were evaluated for thickness, hardness, friability, weight variation, wetting time, content uniformity, disintegration time and in-vitro dissolution. FTIR studies indicated that drug and excipients were compatible. Pre-compression and post-compression parameters were satisfactorily within acceptable limits. The results indicated that concentration of croscarmellose sodium and diluents ratio significantly affected on disintegration and in-vitro dissolution study. Formulation SF9 showed shortest disintegration time (7.3 sec.), shortest wetting time (13.4 sec) and better drug release (99.8%) compared to other formulations. Hence it was selected as optimized formulation. The 3D response surface plots indicated that an increase in the concentration of croscarmellose sodium and an increase in the diluent ratio decreased in the in-vitro disintegration time and increased the percentage drug release. Kinetic study revealed that drug release from all formulations followed first-order kinetics. It was concluded that oral dispersible tablets of antihypertensive drug can be successfully formulated and used as a novel drug dosage form for pediatrics and geriatrics with improved patient compliance.

INTRODUCTION: For the past decade, there has been an enhanced demand for more patient-friendly and compliant dosage forms. As a result, the demand for developing new technologies has been increasing annually.

Since, the development cost of a new drug molecule is very high, pharmaceutical companies are now making efforts to focus on developing new drug dosage forms for existing drugs with improved safety and efficacy together with reduced dosing frequency and the production of more cost-effective dosage forms.

The oral route still represents the preferred way of administration, owing to its several advantages and high patient compliance compared to many other routes 1. Tablets and hard gelatin capsules constitute a major portion of drug delivery systems that are currently available. However, many patient groups such as the elderly, children and patients who are mentally disabled, uncooperative, nauseated, or on reduced liquid-intake/diets have difficulties swallowing these dosage forms. Those who are traveling or have little access to water are similarly affected. To fulfill these medical needs, pharmaceutical scientists have developed a novel oral dosage form known as Orally Disintegrating Tablets (ODTs), which disintegrate rapidly in saliva, usually in a matter of seconds, without the need to take water. Drug dissolution and absorption as well as the onset of clinical effect and drug bioavailability may be significantly greater than those observed from conventional dosage forms. Recent market studies indicate that more than half of the patient population prefers ODTs to other dosage forms and most consumers would ask their doctors for ODTs (70%), purchase ODTs (70%), or prefer ODTs to regular tablets or liquids (>80%) 2.

The US Food and Drug Administration defined ODT as “A solid dosage form containing medicinal substances, which disintegrates rapidly, usually within a matter of seconds, when placed upon the tongue 1. Hypertension is a medical condition in which blood pressure is chronically elevated, If not effectively treated, it may lead to stroke, myocardial infarction, and heart failure and is a leading cause of chronic kidney failure 3.

Beta-blockers play a crucial role in the management of patients with essential hypertension 4. Bisoprolol is one of the cardio selective beta-blockers used to treat hypertension, arrhythmias, coronary heart disease, and angina 5. Studies have shown that bisoprolol fumarate is more effective in controlling high blood pressure when compared to propranolol, atenolol and metoprolol 6.

Bisoprolol fumarate chemically 1-[4-(2-isopropoxyethoxymethyl) phenoxy] - N-isopropyl – 3 – aminopropan – 2 - ol fumarate 7. It appears as white crystal, very soluble in water and freely soluble in alcohol, its mp about 100°C 3. It belongs to BCS class I, and its long half-life of 12 hours make it suitable for designing orally disintegrating tablet. The objective of the present work is to prepare bisoprolol tablets having faster disintegration time, faster dissolution rate, quick on set of action which is beneficial in hypertension and is very convenient for administration without the problem of swallowing and using water.

Determination of Melting Point of Bisoprolol Fumarate by DSC: The melting point of Bisoprolol fumarate was determined by DSC. The DSC is performed to check the drug's thermal behavior and its melting point. DSC scans of the sample were recorded by using DSC Shimadzu-60. The sample was hermetically sealed in aluminum pans and heated at a constant rate of 10°C/min under dry nitrogen flow (10ml/min) between 50 to 200 °C 8.

Formulation of Bisoprolol Fumarate or Dispersible Tablet: Trail batch formulation was developed using three different super disintegrating agents, namely Crospovidone, Sodium Starch Glycolate, Croscarmellose Sodium. Based on the results of the trail batch, croscarmellose sodium was selected as super disintegrating agent, and the formulation was designed by using systat software version 13.2 by considering 2 factors and 3 levels. The concentration of Croscarmellose sodium (X1), and diluents ratio (Prosolv: Mannitol) (X2) were selected as independent variables, which were varied at 3 levels (low, medium, high). Friability (Y1), disintegration time (Y2), and in-vitro dissolution (Y3) were selected as dependent variables and are shown in Table 1. The tablets were prepared by direct compression technique. The composition for each formulation of ODTs of Bisoprololfumarate was shown in Table 2.

Precompression Parameters: The powder blend of the formulation was subjected to evaluation for bulk density, tapped density, carr’sindex, hausner’s ratio, and angle of repose to determine the characteristics of the powder blend.

Thickness: The thickness of the tablet was measured by a vernier caliper, three measurements were taken from each batch. It was recorded in mm 10.

Hardness: Tablets' hardness is a vital parameter that prevents the breakage of the tablet during transportation, handling, and storage. The hardness of tablets was determined using the Monsanto hardness tester, and it was recorded in kg/cm2 11.

Weight Variation: In weight variation of tablet studies, twenty tablets from each batch were selected randomly and individually weighed, and the average weight and standard deviation of twenty tablets were calculated 12.

Friability: Friability was measured to find the strength of the tablet by Roche Friabilator. Ten undusted tablets were weighed and placed in a friability for 100 cycles, undusted, and weighed again. The percentage friability was then calculated using the following equation. A percentage of friability less than 1% is considered acceptable 13.

Wetting Time and Water Absorption Ratio: This evaluation is done by placing a twice folded tissue paper in petridish (with an internal diameter of 5 cm) containing 6ml of water. A tablet was placed on top of this tissue paper in petri dish. Wetting time was noted as the time required for water to reach the tablet's upper surface and thoroughly wet it.

Water absorption ratio ‘R’ was determined by the following equation.

Drug Content: Randomly 20 tablets were taken, weighed and powdered. The powder equivalent to 100 mg of drug was weighed accurately and dissolved in 100ml of phosphate buffer 6.8. The solution was shaken thoroughly. The undissolved matter was removed by filtration through Whatman filter paper 41.

The dilutions were made and the absorbance of the diluted solutions was measured at 223nm. The concentration of the drug was computed from the standard curve of the Bisoprolol fumarate 15.

Disintegration Time: The tablet disintegration apparatus was used to determine the disintegration time of all the formulations. One tablet was placed in each of the six tubes having distilled water. The temperature was kept constant at 37± 2°C and the time taken for the entire tablet to disintegrate completely was recorded 16. 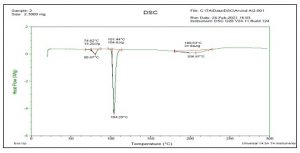 Compatibility Studies: Physical mixture of drug and excipient characterized by FTIR spectral analysis for physical as well as chemical alteration of drug characteristics. The results concluded that there was no interference in the functional groups, as the principal peaks of the model antihypertensive drug were found to be unaltered in the spectra of the drug excipient mixture. IR spectra of drug and mixture are illustrated in Fig. 2A and 2B. 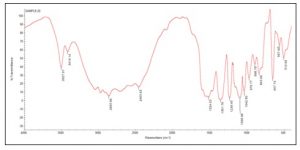 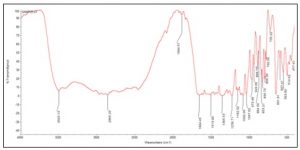 The results of carr’s index of all the formulations were found to be varied from 17.4 to 20.5%, which indicates a good flow property. Hausner’s ratio was found to be in the range of 1.20 to 1.26. The results of the pre-compression of the powder blend are represented in Table 3.

Thickness: The thickness of all formulations was found to be 2.5± 0.2 mm.

Wetting Time: This test mimics the action of saliva in contact with a tablet to illustrate the water uptake. The wetting time of all formulations was found to be in the range of 13.4 to 30 sec. The formulation SF9 (containing the highest quantity of CCS) showed the shortest wetting time of 13.4 sec, which may be attributed to the strong wicking action of CCS. Since, CCS has more sites for moisture uptake thus enhances the wicking ability of CCS.

Drug Content: All the formulations were evaluated for drug content according to the procedure described in the methodology section, and the results are shown in Table 5. The assay values for all the formulations were found to be in the range of 98.8 to 100.2 %, indicating the uniformity in drug content. According to IP standards, the tablets must contain not less than 95% and not more than 105% of the stated amount of the drug. Thus, all the ODT formulations comply with the standards given in IP. 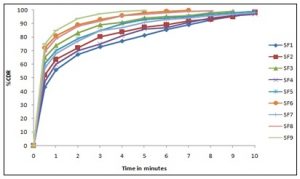 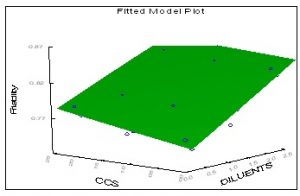 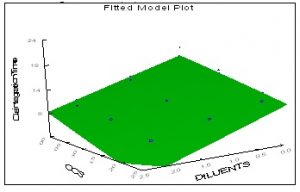 Effect of Formulation Variables on In-vitro Dissolution Study (Y3): In regression coefficient analysis of in-vitro drug release, the p–value for factor 1 (Crosscarmellose sodium) was found to be 0.002 and for factor 2 (diluents ratio-Prosolv: Mannitol) was found to be 0.001.p–value for factor 1 and factor 2 is <0.05 thus both factors effects significantly on in-vitro dissolution and the results of statistical analysis are tabulated in Table 7. In 3D response surface graph of in-vitro dissolution v/s Factor-1(X1), Factor-2(X2) as depicted in Fig. 4C. showed that as the concentration ofcrosscarmellose sodium and diluents ratio (prosolov: mannitol) increases, % CDR increases. Thus both factors were effected significantly. The polynomial equation was generated by using the regression analysis was given below for response in-vitro dissolution (Y3) 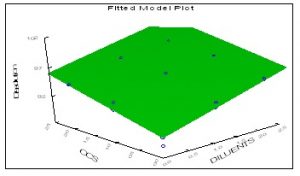 CONCLUSION: The orodispersible tablets of Bisoprolol fumarate were prepared by direct compression method. Among all formulations, SF9 showed less disintegration time and the highest percentage of drug release at 5 min; hence it can be chosen as an optimized formulation. 32 factorial design revealed that amount of superdisintegrant and diluent ratio affect the disintegration time and % drug release.

The results indicate that the presence of crosscarmellulose and diluent ratio enhanced the or dispersion and improved the drug release rate. Thus a satisfactory orodispersible tablet of bisoprololfumarate for large-scale production is feasible.

ACKNOWLEDGEMENT: The authors would like to thank Goa's UniChem laboratories for providing a gift sample of bisoprolol fumarate.