ABSTRACTNaproxen sodium is an analgesic NSAID (non steroidal anti inflammatory drug) used for the treatment of pain, inflammation, fever and stiffness caused by conditions such as osteoarthritis, rheumatoid arthritis, juvenile arthritis, gout, migraine and dysmenorrhea. However, the gastric discomfort caused by drug results in poor patient compliance associated with its conventional dosage forms. Hence the present investigation was undertaken with a view to develop orodispersible tablet of naproxen sodium, which offers quick onset of action of drug and minimizes the problem of gastric discomfort associated with it. Thus improves patient compliance, generates rapid response, enhances bio-availability and also reduces the dose of drug. In this study, orodispersible tablets were prepared by direct compression method using three different superdisintegrants e.g. sodium starch glycolate, croscarmellose sodium and crospovidone in three different concentrations e.g. 3%, 5% and 7% along with other excipients. The tablets were evaluated and the results compared for all three superdisintegrants revealed crosspovidone to be the most efficacious superdisintegrant to formulate orodispersible tablet of naproxen sodium as suggested by the dispersion time, disintegration time and drug dissolution profiles

INTRODUCTION: Oral drug delivery is the most widely accepted route of administration. But conventional oral dosage forms like tablet and capsule bear certain drawbacks such as difficulty in swallowing to pediatric and geriatric patients, need of water for ingestion, adverse interaction of drug with GIT (like gastric degradation, first pass hepatic metabolism of drug), slower onset of action of drug and inconvenience to patients suffering from nausea and vomiting. So as to overwhelm these loopholes of conventional oral dosage forms there is a need of an alternative delivery system that can be an orodispersible tablet (ODT). An ODT is a solid unit pharmaceutical dosage form that contains medicinal substances and disintegrates rapidly (within seconds) without water when placed on the tongue. It dissolves rapidly in mouth to provide quick onset of action of drug and overcomes the problems of swallowing. There is no risk of obstruction of this dosage form, which is beneficial to travelling patients who do not have access to water. Pregastric absorption of drugs through ODT avoids first pass hepatic metabolism and gastric degradation, which reduces the dose and increase the bioavailability. Thus, ODT enhances safety and efficacy of drug molecule by being a convenient and more patient compliant dosage form 1, 2, 3.

Naproxen sodium [(+)-(S)-2-(6-methoxynaphthalen-2-yl) sodium propanoate] is a NSAID used for the treatment of pain, inflammation, fever and stiffness caused by conditions such as osteoarthritis, rheumatoid arthritis, juvenile arthritis, gout, migraine and menstrual cramps. As it is an analgesic drug its rapidity of action is a desired feature. Gastric discomfort is one of the major side effects associated with the drug, which can be minimized by formulating its ODT.

The drug having half life of 12-24 h is well absorbed after oral administration achieving peak plasma concentration (Cmax) within 1 to 2 h after dosing 4. It has good solubility in water and saliva and inherent ability to permeate through oral mucosal tissue. The drug moiety is a weakly acidic drug, so remains in partially non ionized form at oral cavity’s pH, which favors its pregastric absorption. So, all the mentioned traits make the drug ideal candidate for ODT with regards to patient compliance by minimizing its side effects and rapidifying the action.

Preparation of ODTs by Direct Compression Method: Selection of excipients and optimization of their concentration: ODTs of naproxen sodium were prepared using three different concentrations of three different superdisintegrants and then evaluated for various parameters like hardness, friability, weight variation, drug content uniformity, wetting time, dispersion time, disintegration time and dissolution profile to select the best combination for development of optimized formulation of naproxen sodium ODT. The combination with lowest disintegration time and most rapid and highest percentage cumulative drug release was chosen as the optimized formulation, which was further used for stability study. Table1 shows the composition of different trials, which were undertaken for formulating ODTs.

In this method, drug was mixed with suitable portion of superdisintegrant properly. Then, microcrystalline cellulose (MCC) was added and mixed thoroughly. This was followed by addition of diluent. Then, the whole mixture was passed through sieve no. 44. Magnesium stearate, talc, colloidal silicon dioxide and flavoring agent were then blended with the sieved mixture. Finally the mixture was subjected to compression using single punch tablet compression machine 5.

Hardness: Hardness is the force required to break a tablet in a diametric compression test. It was measured using Monsanto tablet hardness tester. It is expressed in kg/cm2.

Friability: Friability test is performed to assess the effect of friction and shocks, which may often cause tablet to chip, cap or break. Roche friabilator was used for the purpose. This device subjects a number of tablets to the combined effect of abrasion and shock by utilizing a plastic chamber that revolves at 25 rpm dropping the tablets at a distance of 6 inches with each revolution. Pre-weighed sample of ten tablets was placed in the friabilator, which was then operated for 100 revolutions. Tablets were dusted and reweighed. Compressed tablets should not loose more than 1% of their weight. The friability (F) is calculated by the following formula-

Disintegration Time: The time required for disintegration of six ODTs, placed in each tube of basket rack assembly of disintegration test apparatus running at a speed of 28-32 cpm, was measured using distill water maintained at 37 ± 2 0C. 6.

Dispersion Time: An ODT was added to 10 ml of PBS (pH=6.8; simulated saliva fluid) at 37 ± 0.5 0C. Time required for complete dispersion of a tablet was measured.

Wetting Time: Five circular tissue papers of 10 cm diameter were placed in a small Petridish (ID = 10 cm) containing 10 ml of PBS (pH = 6.8). A tablet was put on the surface of the paper and the time required for buffer to reach upper surface of the tablet was noted as the wetting time 1.

Drug content uniformity: Five tablets were powdered and the blend equivalent to 120 mg of drug was weighed and dissolved in suitable quantity of PBS (pH= 6.8). The solution was then filtered and diluted suitably. The drug content was then analyzed spectrophotometrically at 272 nm 7

In-vitro dissolution Study: Dissolution study of samples was performed using USP type II apparatus in phosphate buffer pH = 6.8 (simulated salivary fluid). The temperature was maintained at 37±0.5°C and the rotation speed was 50 rpm. The samples were withdrawn at uniform time intervals of 2 minutes and analyzed spectrophotometrically at 272 nm. 3.

Stability Study: Stability study of optimized formulation was carried out to determine the effect of formulation additives on stability of drug and also to determine physical stability of formulation under specified storage conditions. Stability study was conducted by storing ODTs at temperature 40 0C ± 2 0C/75% ± 5% relative humidity for three months. The dissolution, drug content and disintegration behaviors of ODTs were tested after each month. Tablet from each batch was individually weighed and wrapped in an aluminium foil and packed in black bottle and kept at above specified conditions in a heating humidity chamber for three months. After each month, tablet sample was analyzed for drug content, dissolution and disintegration time 8.

U.V. spectrum of drug sample in methanol (scanned in range of 200-400nm) showed absorption maxima at 272 nm, which was found to comply with the prescribed value of absorption maxima for naproxen sodium 10. Thus, drug sample was indicated to be authentic and devoid of impurities by U.V. analysis (fig. 1). 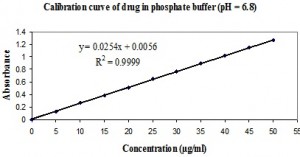 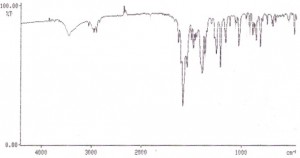 DSC identification analysis of drug sample was done. DSC thermogram of drug (Fig. 3) depicts the prominent and sharp endothermic peak at 255.05oC, which represents melting point of drug and complies with the reported value of it for naproxen sodium. Thus, sample was authentified and identified as naproxen sodium. 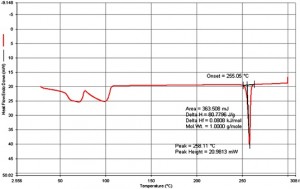 DSC thermogram of combination sample [Fig. 5(a)] exhibited an endothermic peak in the range of 255-257oC, which encloses the value of melting point reported for naproxen sodium. This shows no change in drug moiety and also its compatibility with excipients. The DSC thermogram of drug and excipients combination sample shows the suppression of endothermic peak, which is due to the dehydration of drug at high temperature during DSC analysis. Figure 4(b) and 5(b) are the IR spectrum and DSC thermogram of naproxen sodium respectively. 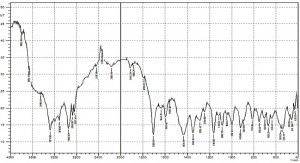 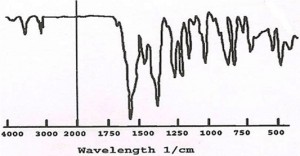 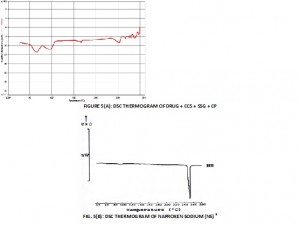 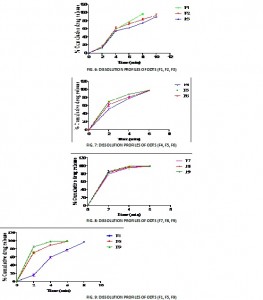 The rapid drug release profile of ODT and pregastric absorption favoring characteristics of drug suggest generation of rapid response and minimization of gastric discomfort caused by the drug. Thus ODT of naproxen sodium appears to be more patient compliant alternative over commercially available conventional dosage forms of drug. On the basis of all the evaluation parameters formulation F9 came out to be the optimized formulation, which was further subjected to the stability study.

Stability study of optimized formulation (CP 7% ODT) was conducted for three months. The dissolution, drug content and disintegration behaviors of ODTs were tested after each month and the values of these evaluation parameters have been mentioned in Table 4, figure 10 and 11 respectively. No significant change was found on comparing the values of evaluation parameters before and after the stability study. Thus, formulation was indicated to be stable. 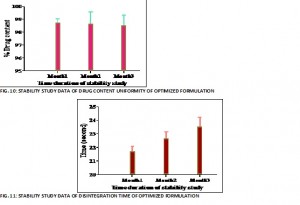 CONCLUSION: The present investigation successfully formulated orodispersible tablet of naproxen sodium with impressive drug release profile. Three different superdisintegrants in three different concentrations were incorporated to formulate ODTs. The results of evaluation parameters conclude that SSG at 3%, CCS at 5% and CP at 7% concentration were found to generate efficacious ODTs and comparatively among above mentioned superdisintegrants, CP at 7% concentration was found to be the most suitable. Thus ODT of naproxen sodium can be prepared by direct compression using superdisintegrants and can be regarded as novel and more patient compliant alternative over conventional dosage forms of drug available commercially in the market.

ACKNOWLEDGEMENT: I pay my sincere thanks to Shreya Life Sciences Pvt. Ltd., Ankleshwar, India for providing gift sample of naproxen sodium.  I would also like to express my gratitude towards my family members and the supreme soul.