FORMULATION AND EVALUATION OF POLYHERBAL GEL FOR ANTI – INFLAMMATORY ACTIVITY

FORMULATION AND EVALUATION OF POLYHERBAL GEL FOR ANTI - INFLAMMATORY ACTIVITY

INTRODUCTION: Traditional medicines play an important role in health services around the globe. About three quarters of the world population relies on plants and plant extracts for health care. A large number of Indian medicinal plants are attributed with various pharmacological activities as they contain diversified classes of photochemical. The opoids or non-steroidal anti-inflammatory drugs, widely used to reduce the inflammation of various types, suffer from severe side effects like redness, itching etc. As a result, a search for other alternatives seems to be necessary which would be more beneficial. The literature survey revealed that various plants scattered throughout the plant kingdom exhibit anti-inflammatory activity. Few well known examples are Acacia nilotica, Withania  somnifera, Glycyrrhiza glabra, Boswelia serrata, Phyllanthus amarus, Eclipta alba etc. which contain flavonoids and are reported for their anti-inflammatory activity. The plants selected for present work are Cynodon dactylon, Cassia tora and Cassia alata which contain high percentage of flavonoids and other component responsible for anti-inflammatory activity.

Gel  formulations  are  used  to  deliver  the  drug  topically  because  of easy  application,  increase  contact  time  and  minimum  side  effects  as  compare  to  other  topical  preparation  and  oral  administration.

The growing popularity of natural and herbal  medications,  easy  availability  of  raw  materials,  cost-effectiveness and paucity of reported adverse reaction,  prompted us to investigate and evaluate anti-inflammatory potential of Cynodon dactylon along  with Cassia tora and Cassia alata  by incorporating into  polyherbal topical gel and assessing its anti-inflammatory  activity.  An  attempt  will  be  made   to  fin  out  synergistic  activity  by  combination  of  the  extracts 16.

Collection of Plant Material: The leaves of Cassia tora and Cassia alata were collected from Hingna, MIDC area, of Nagpur. The aerial part of Cynodon dactylon was collected from medicinal plant garden of J. L. Chaturvedi college of Pharmacy, Nagpur and identified by Department of Botany, R.T.M. Nagpur University, Nagpur. (Voucher specimens 9549, 9550 and 9551).

Preparation of Extract: The collected fresh leaves of Cassia alata, Cassia tora and aerial part of Cynodon dactylon were dried in hot air oven at 400 C to avoid degradation of phytoconstituents. After drying, the plant materials were coarsely powdered with Willy mill and kept in well closed container. About 185 gm, 100 gm and 125 gm powder of Cassia alata, Cassia tora and Cynodon dactylon respectively were defatted with Pet. Ether (60-800) in soxhlet apparatus. After defatting, it was further extracted with methanol. The collected extracts were concentrated by distillation to recover the solvent. Concentrated extracts were kept in desiccators till further used

Preparation of Polyherbal Gel 17-22:The gel was prepared using the dried methanolic extract of Cassia tora Linn., Cassia alata Linn. and Cynodon dactylon (L.) Pers and using Carbopol-940 (1%) as a gelling agent. Gels of individual plant extracts as well as polyherbal gels were prepared. The same procedure was used for preparation of Diclofenac sodium gel as a standard (Table 1).

Stability study: The stability of gels was assessed using the ICH guidelines

The % inhibition of edema was calculated by formula:

a= paw thickness of test animal after treatment

b= paw thickness of control animal after treatment

RESULTS AND DISCUSSION: The polyherbal gels were prepared and evaluated for anti-inflammatory activity by using carrageenan-induced rat paw edema and formalin-induced rat paw edema topically. It was evident that carrageenan-induced edema was commonly used as an experimental in vivo model for evaluating the anti-inflammatory potential of plant extracts and was believed to be biphasic. The early phase observed after 1 hr is related to the production of 5-hydroxytryptamin, histamine, bradykinin and cyclooxygenase products and the late phase is due to neutrophil infiltration as well as continuous production of arachidonic acid metabolites.

The later phase is reported to be sensitive to the most of the clinically effective anti-inflammatory agents. Statistical analysis showed that the edema inhibition by formulation containing extracts were significantly differing from control group at all the concentration tested. The results showed that the anti-inflammatory effect of the formulation containing 4% of C. alata gel was better than the effect of standard gel formulation. In the individual formulation of various concentration of plant extracts (1%, 2% and 4%), 4% gel of C. alata showed significant inhibition (82.57%) of paw edema in rats comparable to standard diclofenac gel (0.5%) (78.65%) at 300 min after carrageenan injection.

In combination, formulation applied half dose of individual formulation (0.5 gm) showed synergistic effect (77.22%).The highest inhibition was found at 300 minutes post carrageenan injection, which is supposed to be due to inhibition of late phase mediators, arachidonic acid product and prostaglandins, of acute inflammation induced by carrageenan (Figure 1).

Formalin-induced rat paw edema model was used for acute as well as chronic inflammation on the basis of formalin concentration. For chronic model, 2% of formalin in saline is used. Formalin-induced edema is biphasic. An early neurogenic component is mediated by substance P and bradykinin followed by a tissue mediated response where histamine, 5-HT, prostaglandin are known to be involved. Statistical analysis showed that the edema inhibition by formulation containing extracts were significantly differing from control group at all the concentration tested.

As compared to acute inflammation, in chronic model, it showed no significant result as compared to standard. In the individual formulation of various concentration,4% gel of C. alata formulation showed inhibition (29.30%) of paw edema in rats comparable to standard drug diclofenac gel 0.5% (45.88%), after 9 day (Figure 2).

Moreover polyherbal gel showed synergistic effect as compared to individual gels which can be useful for the treatment of local inflammation (Figure 3 and 4). 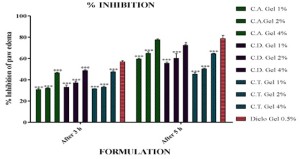 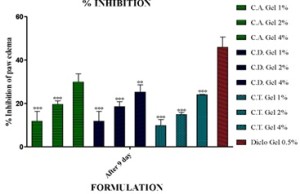 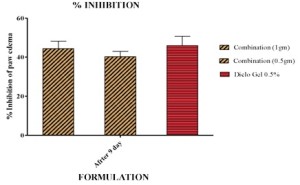 CONCLUSION: On the basis of the study, the data showed that the polyherbal gels prepared from the dried methanolic extracts Cassia tora Linn., Cassia alata Linn. and Cynodon dactylon (L.) Pers.f gave the significant anti-inflammatory activity when compared with standard Diclofenac gel. As phytochemical tests showed the presence of glycosides, carbohydrates, flavonoids, steroids and resin in the methanolic extracts they might suppress the formation of prostaglandins and bradykinins or antagonize their action and exert its activity. The polyherbal gels showed synergistic effect as compared to individual gels which can be useful for the treatment of local inflammation.