ABSTRACT: The purpose of this research was to develop and evaluate naturally obtained polysaccharides (Tamarind seed polysaccharide and Pectin) as a carrier in colon targeted drug delivery systems a colon targeted drug delivery. The newer developments in this context aim for an increased selectivity of drug delivery by targeting mechanisms which have a closer relation to pathophysiological particularities of the disease. The polysaccharides were characterized of its physical properties. The interaction between the excipcents and prednisolone was also studied through FTIR spectroscopy.  Tablets were then prepared by wet granulation method with different ratio of polysaccharides and evaluated for their physical properties like weight variation, hardness, friability and content uniformity. In vitro drug release studies were performed in conditions simulating stomach to colon transit. No significant release was observed at acidic pH, however, when it reached the colonic pH where, drug release was observed. Also, release of drug was found to be higher in presence of rat caecal content. Data were fitted to various kinetic models. The mechanism of drug release from tablets was found to be non-Fickian, anomalous transport.

INTRODUCTION: In the area of targeted delivery, the colonic region of the GI tract is the one that has been embraced by scientists and is being extensively investigated over the past two decades. Targeted delivery to the colon is being explored not only for local colonic pathologies, thus avoiding systemic effects of drugs or inconvenient and painful trans-colonic administration of drugs, but also for systemic delivery of drugs like proteins and peptides, which are otherwise degraded and or poorly absorbed in the stomach and small intestine but may be better absorbed from the more benign environment of the colon.

The delivery of drugs to the colon for systemic action or a local effect is valuable in a variety of circumstances. These include the topical treatment of disease such as ulcerative coliitis, crohn's disease, irritable colon syndrome, infectious disease, colon cancer and the potential for the oral delivery of peptides, protein and other liable drugs. Several methods of colonic targeting have been proposed, Because of taking advantages of the apparent consistencies of small intestinal transit time, utilization of pH changes within the GIT tract and the exploitation of bacterial enzymes localized in the colonic region of the GIT1.

The timed release capsules rely on the reported consistency of small intestinal transit time. But the overall variability in gastrointestinal time may give rise to problems. The pH approach has recently been shown to lack site specificity.

A more universal system, which is capable of delivering several compounds to the colon based on bacterial degradation, is well established. Polysaccharides are extensively degraded during transit throughout the colon. The main consequences of the bacterial fermentation of such polysaccharides are faecal bulking, decreased transit of the colonic contents, and increased nitrogen utilization in the gut and formation of short fatty acids which form a useful energy supply.

Enzyme responsible for degradation include b-galactosidase, b-glucosidase, b-xylosidase and b-fucosidase which are secreted by the various bacterial species. Consequently polysaccharides possess promise as agents for the selective drug to the colon 2. Prednisolone is synthetic corticosteroid drug that is particularly effective as an immuno-suppressant, and affects virtually all of the immune system.

Isolation of Tamarind Seed Polysaccharide (TSP) 4: Tamarind seed polysaccharide was prepared following methods by in three batches on a laboratory scale. To 20g of tamarind kernel powder, 200ml of cold distilled water was added and slurry was prepared. The slurry was poured into 800ml of boiling distilled water. The solution was boiled for 20 minutes under stirring condition in a water bath.

The resulting thin clear solution was kept overnight so that most of the proteins and fibers settled out. The solution was then centrifuged at 5000 rpm for 20 minutes. The supernatant was separated and poured into twice the volume of absolute ethanol by continuous stirring. The product was pressed between felt. The precipitate was washed with absolute ethanol, diethyl ether and petroleum ether and then dried at 50-60°C under vacuum. The dried material was ground and sieved to obtain granules of different particle size range 4.

Solubility Test: The solubility of the polysaccharides in cold water and 95% ethanol were determined and the results recorded.

Iodine Test: 1g of polysaccharides was boiled with 15mls of water. After cooling to 1ml of the mucilage, 2drops of 0.1N iodine solution was added and the colour change noted.

Angle of Repose: A 30 g sample of the granules was poured into a plugged glass funnel with the tip, 10 cm above the flat surface of the bench. The granules were allowed to flow freely through the orifice of the funnel to form a heap whose height and diameter were determined.

The angle of repose was calculated using the equation below:

Where h = height and r = radius of circular heap

Bulk Density: A 30g weight of each of the polysaccharide to be used as carrier was weighted and poured in to a 100ml measuring cylinder and the volume was recorded. The bulk density was then calculated.

Where M is mass and V is volume

Tapped Density: A 30g weight of each of the polysaccharide was weighted and poured into a 100ml measuring cylinder and tapped on a hard surface 30 times from about 2cm height and the volume was recorded.

Where M is mass and V is volume

Where TD is Tapped density, BD is Bulk density

Compatibility Study: Before formulation of a drug substance into a dosage form, it is essential that it should be chemically and physically characterized. Compatibility studies give the information needed to define the nature of the drug substances and provide a frame work for the drug combination with pharmaceutical excipients in the fabrication of a dosage form. One of the requirements for the selection of suitable excipients or carrier for pharmaceutical formulation is its compatibility.

Therefore in the present work, a study was carried out by using Shimadzu FTIR spectrometer to find out if there is any possible chemical interaction between prednisolone and excipients respectively. The samples were powdered and intimately mixed with dry powdered potassium bromide. The powdered mixture was taken in a diffuse reflectance sampler and the spectra recorded by scanning in the particular wavelength region (4000-400 cm-1) using Shimadzu FTIR spectrometer. The IR spectrum of drug was compare with that of the physical mixture of the drug and excipients used to check for any possible drug-excipients interaction.

Formulation of Prednisolone Tablet: Four different batches of tablets each containing 50mg of prednisolone were formulated and evaluated. In all four bathes the tablets were formulated employing prednisolone alone naturally obtained polysaccharides and Eudragit S-100 as a carrier and wet granulation method. Talc (2%) and magnesium stearate (2%) as lubricants were microcrystalline cellulose [MCC] (5%) as disintegrant were used. In each batch 100 tablets were prepared (table 1).

Weight variation: The USP weight variation test was performed by taking 20 tablets from a batch. Then 20 tablet, were weighed and the average weight is taken. Then each tablet was weighed individually. The percentage deviation can be determined by using the following formula;

Hardness Test: Pfizer hardness tester was used for measuring the hardness of the formulated prednisolone tablets. From each batch five tablets were taken at random and subjected to test. The mean of these five tablets were given in the table.

Friability: It is a measure of tablet strength. The friability was determined by using Roche Friabilator. 10 tablets were taken and their weight determined. Then they were placed in the friabilator and allowed to make 100 revolutions at 25rpm. The tablets were then dusted and reweighed. The percentage weight loss was calculated by using the following formula;

Drug content Uniformity: The prepared tablets containing prednisolone was tested for drug content uniformity. Tablets were dissolved in 100 ml of phosphate buffer (pH 6.8) in 100 ml volumetric flask which was previously clean and dry. This solution after suitable dilution was measured for absorbance at 248 nm in a UV visible spectrophotometer.

Disintegration Test: Six tablets were taken in disintegration apparatus. Six glass tubes that are 3 inches long open at the top and held against a 10 mesh screen at the bottom end of the basket rack assembly. To test the disintegration time one tablet was placed in each tube, and the basket rack was positioned in a 1litre beaker of water at 37oC ± 2oC such that the tablets remain2.5 cm from the bottom of the beaker. A standard motor driver device is used to move the basket assembly up and down through a distance of 5-6cm at a frequency of 28-32 cycles per minute. To meet the USP standard all particles of tablet must pass through 10 mesh screen in the time specified.

Dissolution: The ability of matrix tablets of prednisolone to remain intact in the physiological environment of stomach and small intestine was assessed by mimicking mouth to colon transit. Drug release studies were carried out using USP XXIII dissolution apparatus (100 rpm, 37± 0.5°C) in 900 ml 0.1N Hydrochloric acid for 2 hours as the average gastric emptying time is 2 hours. The dissolution medium was replaced with 900ml pH 7.4 phosphate buffer and tested for 3 hours as the average small intestinal transit time is about 3 hours. The dissolution medium was then replaced with pH 6.8 phosphate buffer and drug release studies were carried out for 24 hours as the usual colonic transit time is 20-30 hours. The sample of dissolution medium was taken at the end of specified time intervals filtered and filtrate was analysed for prednisolone at 248nm using UV spectrophotometer. Equal volume of fresh medium having same temperature was replaced at each time. And studies using rat caecal contents as naturally obtained polysaccharides undergone degradation in colon by colonic bacteria.

Stability Studies: To study the effect of temperature and humidity on the tablets, they were stored at 400c and 75% RH in Stability chamber (LabTop Instruments Pvt. Ltd.). After three months disintegrating time, drug content and FTIR spectrum were recorded to observe any effect on the tablets by the exposure to humidity and temperature.

Compatibility Study: According to FTIR, the major peaks observed in drug spectrum were also observed in spectrum of drug with polymers; therefore it indicates that there was no incompatibility between drugs and different polymers.

The hardness values ranged from 6.8 to 7.2 kg/cm2 for all formulations (Table 3). The   entire tablets passes weight variation test as the average % weight variation was the pharmacopoeial limit of 5% (Table 3). The friability values were found to be within the limit (Table 3). The drug content of prednisolone determined at 248nm ranges from 98.66mg to 99.28mg and complies with IP standard. In the study, the disintegration time ranges 153 sec to 175 sec (Table 3). 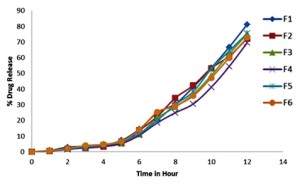 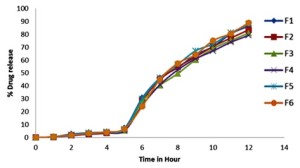 The drug release data of prednisolone after 5th hour were fitted to various kinetic models. The data were processed for regression analysis using MS-EXCEL statistical functions. Evaluation of release kinetics and application of best fit by correlation coefficient shows that the drug release following Higuchi square root kinetics. The release exponent ‘n’ calculated from the Korsemeyer-Peppas equation, shows that in all the batches, the ‘n’ values were between 0.45 and 1.

It can be suggested that the release mechanism was non-Fickian, anomalous transport where release dependent on both drug diffusion as well as polymer relaxation.

Stability studies: The results of accelerated stability studied indicated that there was no significant change in the tablets. The drug content was found to be within 100±5% for all the formulations at the end of 90 days. FTIR analysis suggested that there was no significant degradation or changes taking place in the tablets during the study period.