FORMULATION AND EVALUATION OF PROGRAMMED RELEASE OCULAR INSERTS OF MIZOLASTINE

FORMULATION AND EVALUATION OF PROGRAMMED RELEASE OCULAR INSERTS OF MIZOLASTINE

The main objective of this study was to prepare controlled release matrix type ocular inserts of mizolastine for the treatment of seasonal allergic conjunctivitis.The films were prepared by solvent casting technique using Eudragit RL100 and RS100 in different ratios with dibutylphthalate as the plasticizer. The films were evaluated for the physicochemical parameters. In-vitro studies were carried out using Franz-diffusion cell (bi-chamber compartment model)and ex-vivo studies of the optimized formulation were carried out using goat’s cornea. In vivo studies were performed using rabbit as the animal model. Formulations F4andF6, which showed controlled and prolonged in vitro drug release, were subjected to in vivo study. In vitro and in vivo correlation was found to be good, revealing the efficacy of the formulations.Formulation F6 was found to be promising, as it achieved the objective of the present study.

INTRODUCTION: The anatomy, physiology and biochemistry of the eye render this organ exquisitely impervious to foreign substances. The human eye is a challenging subject for the topical administration of drugs. Solutions, in spite of their limitations (quick elimination from the precorneal area, resulting in poor bioavailability), are still given top priority by the formulators since they are relatively simple to prepare, filter and sterilize.

Eye drops do not remain in contact with the eye for a long time and must be administered at relatively frequent intervals. Suspensions have the advantage of longer contact time in the eye, but also the disadvantage of an irritation potential, due to the particle size of the suspended drugs. Irritation may produce excessive tearing and consequently rapid drainage of the instilled dose. Ointments have the advantages of longer contact time and better storage stability, but also the disadvantage of producing a film over the eye, thereby blurring the vision 1.

The specific aim of designing an ocular therapeutic system is to achieve, optimal concentration of drug at the active site for an appropriate duration 2. Ocular inserts are novel drug delivery systems, which release the drug at a pre-programmed rate for the controlled period of time by increasing the pre-corneal residence time. Ophthalmic inserts are sterile, soft, thin and flexible disk made of appropriate polymeric materials, fitting into the lower or upper conjunctival sac. Mizolastine, a benzimidazole derivative, is a new, non-sedating antihistamine with additional anti-inflammatory properties, providing relief in seasonal and perennial allergic rhinitis. It is a peripherally acting, selective H1-receptor antagonist 3.

Materials: Mizolastine was received as a gift sample from Dr. Reddy’s, Hyderabad. Eudragits were procured from Evonik, Mumbai and Dibutyl phthalate from S.D. Fine Chemicals Ltd., India. All the solvents used were of analytical grade.

Preparation of Ocular Inserts: The mizolastine ocular inserts were prepared by solvent casting technique on Teflon coated petriplates 4. Formulations were prepared with 2-Hydroxypropyl-β-Cyclodextrin (2-HP-β-CDs), Eudragit RL 100 and Eudragit RS 100 in different concentrations as shown in Table 1. Acetone: Methanol form an azeotropic mixture and was found to be most suitable for making satisfactory films. The 2-HP-β-CDs and Eudragits were dissolved in a mixture of acetone and methanol. Mizolastine was then dissolved in the polymer solution and finally dibutylphthalate was incorporated as the plasticizer 5. The solutions were poured into Teflon coated petri-dish of diameter 7.5cm and solvent was allowed to equilibrate at room temperature for 24 hours. Elliptical shaped ocular inserts of area 0.65 cm2 were cut out of the film with the help of stainless steel die. The ocular inserts were stored in an airtight container under ambient conditions.

Interaction Studies: Interaction studies were conducted on the optimized formulations by comparing them with the pure drug and the placebo films. Drug-polymer compatibility was confirmed by ultraviolet, infrared and thin layer chromatography analysis.

RESULTS AND DISCUSSION: The present investigation was undertaken with the objective of preparing controlled release ocular inserts of mizolastine using Eudragits and 2-HP-β-CDs as the polymers. The prepared batches were found to be uniform and flexible, proving the efficiency of Dibutyl phthalate as a plasticizer. Physicochemical evaluation studies (Table 2) revealed that all the batches were uniform with respect to thickness, weight of individual insert, and drug content, proving the suitability of the solvent casting method for preparing the inserts. The minimum standard deviation values suggested that the method adopted for casting films on the Teflon surface was satisfactory. 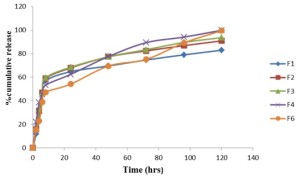 The data obtained from in vitro studies of all six formulations was subjected to kinetic treatment to study the order of release. Regression coefficient values obtained for each formulation were compared to get the release kinetics (Table 3). R2 values obtained by Zero order, First order, Korsemeyer-Peppas, Hixson- Crowell and Higuchi kinetic equation revealed that in vitro drug release followed square root of time (Higuchi release) kinetics. It was interpreted that the drug release from the inserts was taking place by diffusion mechanism.

The stability studies carried out indicated that the ocular inserts were stable and there was no effect on the drug content and  in vitro release.

Animal studies were carried out as per the protocol approved by the animal ethical committee under the protocol no. IAEC/CCP/12/PR-015.  The results of Ocular irritancy test revealed that inserts prepared using Eudragit were non-toxic and non-irritating to the eye. No signs of redness, watering of the eye and swelling were observed with the optimized formulation.

In vivo release study was conducted using six healthy rabbits of either sex to measure the amount of drug remaining in the sterilized ocular inserts at periodic time intervals. The  drug release from the formulation F4 and F6 after 5 days was found to be 80.59 % and 91.66 % respectively. Fig. 2 shows the cumulative percent drug release from F4 & F6 formulation. 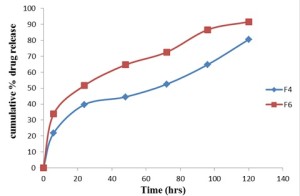 In-vitro-in-vivo Correlation of formulation F4 and F6 was obtained by plotting Scatter diagram between cumulative percent drug released, in vivo and in vitro respectively (Fig. 3 and 4 respectively). The correlation was good with both the formulations and r2 value for F4 and F6  was 0.921 and 0.977 respectively.. 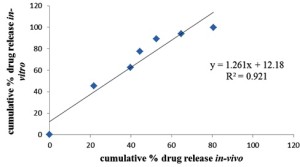 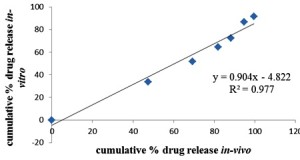 CONCLUSION: Matrix type ocular inserts of mizolastine prepared using Eudragits RL 100 & RS 100 were capable of releasing the drug continuously at controlled rate for 5 days. However, their potential to treat seasonal allergic rhinitis in humans needs to be investigated further.

ACKNOWLEDGEMENTS: The authors are grateful to Dr. Reddy’s Laboratories , Hyderabad for providing the gift sample of mizolastine and Department of Pharmacology, Chitkara University for providing  assistance in performing animal studies.