ABSTRACT: The objective of the study to formulate and evaluate of pulsatile drug delivery containing combination of domperidone and paracetamol for the treatment of migraine which is used to deliver the drug at specific time as per pathophysiological need of the disease and improvement of therapeutic efficacy and patient compliance. Domperidone and paracetamol in the core tablet was formulated with different concentration of superdisintegrants and microcrystalline cellulose, an outer shell tablet which is formulated with different weight ratios of ethyl cellulose (EC) and hydroxyl propyl methylcellulose (HPMC). The effects of the formulation of core tablet and outer shell of press coated tablets; on drug release and the lag time were investigated. The formulation was optimized based on acceptable tablet properties and in vitro drug release. The release profile of press coated tablet exhibited a lag time dependent upon the amount of HPMC K15 and EC in compression coating, followed by burst release. The optimized batch PRT3 gave a lag time of 6.1 h and drug release of 98.67% and 92.56% of paracetamol and domperidone respectively. This consisted of equal amount of HPMC: EC (75:75 w/w). Based on the results programmable pulsatile release has been achieved by formulation PRT3 which meet the demand of Chrono therapeutic objective of migraine.

INTRODUCTION: Pulsatile drug delivery is basically related to the circadian rhythm of the body. It characteristic is that drug release occurs depending on the previously determined time interval, the artificial or natural stimuli etc. 1 It is well established that many body functions display circadian rhythm, The physiology of the body is not uniform 24 hours a day. The delivery and therapy should be modified to achieve an effective drug level at the time required.

This can be achieved by adopting a pulsatile drug delivery system of a suitable drug such type of formulation that are taken at bed time with pre-programmed start of drug release in early morning hours could offer a more effective therapy than a controlled conventional release drug delivery system. It is increasingly recognized that there are rhythmic and temporal patterns in the manifestation of many disease states. The symptoms for many diseases are pain, nausea and vomiting, bronchial asthma etc.

The present investigation is aimed at treatment of such symptom like pain or nausea symptom of migraine. Migraine is typically triggered during rapid eyeball movement episodes during night time sleep or in the early morning hours. 2

In migraine headache symptoms associated such as nausea and vomiting and pain, so to combat symptoms of migraine (headache) domperidone and paracetamol are recommended. 3 Domperidone is rapidly absorbed following oral administration with peak plasma concentration at 30-60 min. Bioavailability is improved in normal subjects, when taken after meal. Protein binding is 91.93 % and half-life is7.9 h. It belongs to class II drugs, according to BCS. 4 Paracetamol is generally considered as weak inhibitor of the synthesis of prostaglandins. However the in vivo effects of cox 2 inhibitors when the level of arachidonic acid is low PGs are synthesized largely by cox2 in cells that contain cox1 & cox2. There is considerable evidence that the analgesic effect of paracetamol is central and is due to activation of descending serotogenic pathways. 5 Paracetamol has bioavailability of 100 %, metabolism to the extent of 90-95 % mainly in hepatic, half-life 1-4 h and belongs to class IV BCS. 6

Aim of the present investigation was focused at combating the early morning hours or night sleep of migraine mainly symptoms such as vomiting & pain. This approach will be achieved through pulsatile drug delivery system containing combination of domperidone and paracetamol.

Preparation of rapid release core tablets: The core tablets were prepared by wet granulation technique. The composition of the tablets was showed in Table 1. All the excipients were passed through sieve no.30. The required ingredients were accurately weighed and mixed thoroughly for 5 min. The ingredients were mixed with binder (PVP in isopropyl alcohol). The wetted mass was passed through 22 mesh sieve and granules were dried in hot air oven (40˚C) for 30 min and the granules was again passed through sieve no 20 and mixed with 2% of talc and magnesium stearate. The resulting blends were subjected to the micromeritic properties and compressed by using 10 mm punch using multi station tablet punching machine. 10

Coating of core tablet: All the ingredients were accurately weighed and passed through sieve no.70 and thoroughly mixed for 5 min. As given in the Table 2. The mixture of two polymers was filled in the die of 12mm diameter and then gently compacted to make a powder bed with a flat surface. The core tablet (domperidone 10mg and paracetamol 500mg) was carefully placed in the centre of powder bed. The die was filled with the remaining of coating mixture so that powder bed was compressed directly using 12mm flat punch to produce desired press coated tablets.10

Hardness: Five tablets were randomly picked from each formulation and the mean hardness was determined using Monsanto hardness tester.

Thickness: Three tablets were randomly taken and thickness was measured by placing tablet between two arms of the Vernier callipers.

Friability: A minimum of 40 tablets were randomly selected and the total weight was noted. The weighed tablets were placed in the Roche Friabilator and allowed to make 100 revolutions at the rate of 25 rpm for 4 min. The tablets were dusted and weighed again. The % Friability was calculated using the formula.

Disintegration Time: Tablet disintegration is an important step in drug absorption. The test for disintegration was carried out in Electro lab USP disintegration test apparatus. To test the disintegration time of tablets, one tablet was placed in each tube and the basket rack was positioned in a 1L beaker containing pH 1.2 Buffer solution at 37°C ± 1°C such that the tablet remains 2.5 cm below the surface of the liquid. The time taken for the complete disintegration of the tablets was noted. 8

Drug Content uniformity: 10 tablets were randomly selected and crushed. Then these tablets were dissolved in a small quantity of methanol and the volume was made up to 100 ml with phosphate buffer pH 6.8. The solution was then filtered and the absorbance was measured at 271.3 nm and 283 nm respectively using phosphate buffer as a blank. The test results were interpreted with the limits of British Pharmacopoeia. 7

Stability studies: The stability of the pulsatile tablets is based on the type of polymer coating and its concentration. The stability testing was done by exposing the prepared tablets to temperature and humidity according to the ICH guidelines for a period of 6 months.

Thicknesses of tablets were found to be within the range of 3.6±0.06 to 4.9±0.009. Weight variation of tablets of all the batches was found to be within the IP limit. Hardness, friability, and disintegration time of batches were found to be varying with respect to the formulation parameters. Hardness was found to be increased with increase in the concentration of MCC. For the batches RR3, RR6, RR7, and RR9, the hardness was found to be very low and friability is beyond the pharmacopoeial limit. For batches RR1, RR2, RR4, RR5, and RR8, hardness was satisfactory and the friability within the pharmacopoeial limit. Based on the hardness of the tablet two formulations was satisfactory RR5 and RR9, hence it was concluded on the basis of disintegration time RR5 was optimized for the coating of the core tablet.

Evaluation of Pulsatile Release Tablet: The optimized formulation was coated with both polymers hydroxyl propyl methyl cellulose and ethyl cellulose respectively with different weight ratios (150:0, 120:30, 75:75, 30:120, 0:150w/w). The % CDR was given. The pulsatile tablets of Domperidone and Paracetamol were subjected to post compression analysis. The tablets were prepared by direct compression method. The hardness of the tablets prepared by direct compression method was determined by using Monsanto Hardness tester. The mean thickness of core tablets was (n=3) found within the range of 5.14 – 6.02 mm for the pulsatile tablets as shown in Table 4. The drug content uniformity of all formulations was carried out and was found to be within the range 94.12 % to 99.01 %. As shown in Table 5.

4.5.4. In vitro release; In vitro drug release studies were carried out using USP Type II dissolution apparatus with HCl as the dissolution medium for 2 h and the tablet was then transferred to PBS pH 6.8 for the remaining 6 h at 50 rpm Fig. 1, 2. 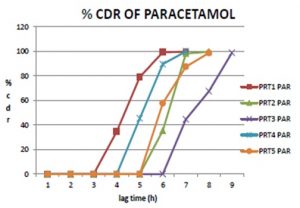 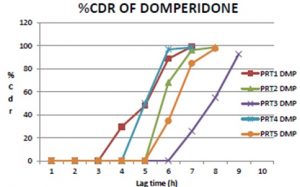 Stability Studies: The formulation PRT3 showed the satisfactory results in the pre and post compression properties. The desirable lag time was achieved with formulation PRT3 and the release of the drug was about 98% for paracetamol and 92%, thus the stability of the formulation PRT3 was considered in the present study. The pulsatile tablet samples were subjected to the conditions of 40±2° C and relative humidity of 75±5% and for 6 months. The results of the stability studies are given in the Table no 48, 49 & 50 (Table 6).

CONCLUSION:  In the present study an attempt was made to develop pulsatile drug delivery system of domperidone and paracetamol to overcome the dosing requirement of conventional tablets. Wet granulation technique was applied for formulation of core tablet by using excipients such as MCC, Crosspovidone, crosscarmellose, sodium starch gylcolate and PVP in isopropyl alcohol as binding agent. Core tablets coated with 75:75 mg each of HPMC K15 and EC polymers was found to be satisfactory with respect to the required lag time (it has a lag time of 6.1 h), which gave a pulse release of 98.67 % of PAR and 92.56 % of DMP. The drug content uniformity of formulation was found to be 92 % to 99 %. All the formulations of the lsatile tablets showed zero order release kinpuetics. The stability studies carried out showed no significant changes in the drug content and the friability indicating the formulation to be stable at the conditions of 40±2° C. Programmable pulsatile release has been achieved by formulation PRT3 which meet the demand of Chrono therapeutic objective of migraine. Further work is recommended to support its efficacy claim by long term pharmacokinetics and pharmacodynamics studies.