ABSTRACT: Levocetirizine dihydrochloride is an orally active, third-generation non-sedative antihistamine used in the symptomatic relief of seasonal and perennial allergic rhinitis. It competes with endogenous histamine for binding at peripheral H1-receptor sites on the effector cell surface. The present work aimed to prepare mucoadhesive buccal films to deliver the drug in a controlled manner with a longer duration of action, which is beneficial in managing severe conditions of allergies. The semisolid casting method was used to prepare the film using different conc. of sago starch and glycerol (plasticizer) with a variation of heating time and heating temperature. The study clearly indicated the influence of heating time and concentration of sago starch on drug release profile. It was noticed that the rate of drug release increased with increased heating time and slowed as the concentration of polymer increased. Prepared mucoadhesive films were evaluated for parameters such as thickness, surface pH, swelling properties, tensile strength, drug content etc.

INTRODUCTION: Amongst the various routes of administration available, the oral route is the most suited one. However, one major drawback of drugs given through oral route is that they are prone to hepatic fist-pass metabolism or metabolism in GI tract 1, 2. Hence, an alternative to this is the delivery of drugs through mucosal surfaces such as nasal, rectal, vaginal, oral, etc. Such mucoadhesive drug delivery systems increase the bioavailability of the drug by bypassing first-pass metabolism or avoiding metabolism in the GI tract. Amongst the various sites available for mucoadhesive drug delivery, buccal mucosa is the best because of its good accessibility, robust epithelium, quick and easy removal of the dosage form in case of need, good drug absorption, reduction of the first-pass metabolism, and patient compliance 3, 4.

Hence, attempts have been made to develop buccal mucoadhesive films over the existing tablets. Levocetirizine dihydrochloride is a third-generation non-sedative antihistaminic drug used to relieve allergy symptoms. This drug has more than 70% oral bioavailability; due to high bioavailability, its dose is very low (5 mg once daily), which is very much suitable for film formation, Hence, this drug was chosen as the model drug, and a film was prepared using sago starch. Indian sago (Cassava) starch is used as polymer, which is obtained from the root of the Cassava plant Manihot esculanta, Crantz (Fam. Euphorbiaceae).

MATERIALS AND METHODS: Levocetirizine dihydrochloride was a gift sample from Ancalima Lifescience Pvt. Ltd., Murthal, Haryana and Indian sago starch was obtained from the local market of Sonipat (Authenticated by PUSA, Delhi); other chemicals used were of analytical grade. The film was prepared by solvent casting method.

The above dispersions were heated at 90 °C until the gelation of starch took place. Then the gelatinized starch was cast in the plastic laminated glass plate. It was kept overnight in an oven at 50 °C for drying of the film. These films were peeled off after drying and stored in a desiccator till further use Table 1.

Study of Physical Characteristics of the Formulations:

Weight Variation and Thickness: 5 Each formulation was prepared in triplicate (n = 3), and 5 films equivalent to 1 × 1 cm2 area were cut from each batch. Their weight was measured using a digital balance (Shimadzu Corporation, Tokyo, Japan).

A digital micrometer (Mituotoyo, Japan) was used for thickness measurement at five different places of film, and the mean was calculated.

Swelling Percentage: 5, 6-9 A film from each formulation was weighed, and then phosphate buffer (pH 6.8) was poured into the petridish. In 15 mins intervals an increase in the weight of the film was noted for 60 min, and the weight was calculated.

The following formula was used to calculate swelling properties.

Folding Endurance: 12 Films of size (1 × 1 cm) were cut by a sharp blade. Folding endurance was determined by repeatedly folding a small strip of film at the same place till it tore off.

Tensile Strength: 13 In this study, Tensile meter (Fibrotech electronics Roorkee) instrument equipped with 25 kg load cell was used to determine and evaluate the mechanical properties of the films. A Film strip was cut with the dimensions 1 × 1 cm2 and without any visual defects and positioned between two clamps separated by a distance of 3 cm. The lower clamp was held stationary, and the strips were pulled apart by the upper clamp moving at a rate of 2 mm/sec until the strip broke. At the point when the strip broke, the applied force was recorded. The tensile strength values calculated by the following formula:

Ex-vivo Mucoadhesion: 14, 15 Modified physical balance method was used to determine the ex-vivo mucoadhesive strength of the prepared films. As a model mucosal membrane, goat buccal mucosa was used. The tissue was obtained from the goat after slaughter and stored in a simulated artificial saliva solution. A pan balance was used. Stainless steel tissue holder was used in place of one pan of the balance. On the ground surface of the two tissue holders, two rectangular pieces of tissues were cut and glued with an adhesive. By placing an empty beaker on one pan and weights on the other, both sides of were balanced. Between the two tissue surfaces, 1 × 1 cm2 of the film was placed. Water was added dropwise after 10 min to the empty beaker which is placed on the pan until both tissue holders detach. The water collected in the beaker was weighed and expressed as a weight (gram force) required for the detachment, using the following equation:

Where m is the weight of the water infused at the detachment, g the acceleration due to gravity considered as 980 cm/s2, and A the area of tissue exposed (cm2).

Drug Content: 1 × 1 cm2 film from each batch was kept in 10 ml phosphate buffer (pH 6.2). The solution was filtered, and drug content was determined using UV- Visible spectrophotometer (UV-1700 pc). From each batch, three readings were taken.

In-vitro Drug Release using Modified Magnetic Stirrer Method: 15 In-vitro release of drug from the mucoadhesive film was studied by modified magnetic stirrer assembly. Phosphate buffer solution (pH 6.2) 100ml was used as dissolution medium. 1 × 1 cm2 film from each batch (L1-L9) was taken and placed inside in a test tube containing 2 ml of pH 6.2 phosphate buffer, and the test tube opening was tied with a cellophane membrane. The test tube was placed in an inverted position in the beaker containing the dissolution medium. The dissolution medium was stirred continuously at 50 rpm using a magnetic stirrer, and the temperature was maintained at 37 ± 5 °C. 2 ml samples were withdrawn at regular intervals, and the same was replaced by an equal volume of fresh buffer solution, samples were analyzed by using UV spectrophotometer.

In-vitro Drug Release using Franz Diffusion Cell: In receptor compartment of Franz diffusion cell phosphate buffer pH 6.2 (15ml) was placed, 2 ml of the same medium was taken in donor compartment, and cellophane membrane was placed between the compartments. 1 ×1 cm2 film from each batch (L1-L9) was placed in the donor compartment. The temperature was maintained at 37 °C. The samples (0.25ml) were withdrawn, and drugs were analyzed using UV spectrophotometer.

Weight Variation and Thickness: Weight variation of all the 9 batches (L1-L9) was checked by weighing 1 × 1 cm2 of film from each batch, and it was observed that all the batches were uniform in weight Table 2.

Percentage Moisture Loss (PML): All batches were kept at low humidity for three days, and percentage moisture loss was calculated. Results are shown in Fig. 1. Maximum PML was observed for batch L6 (37.5 ± 1.03%). Table 2, PML increased with heating time and decreased with an increase in polymer concentration. 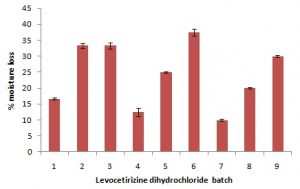 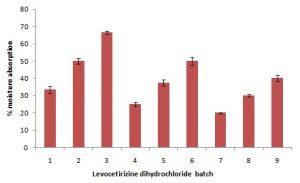 Percentage Moisture Absorption (PMA): PMA of formulations was also determined by keeping them in high humidity conditions for three days. The results can be seen in Table 2 (Fig. 2). The maximum value of PMA was in batch L3 (66.67 ± 0.92%). 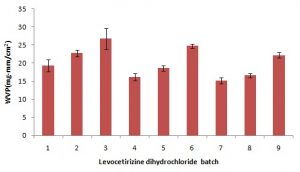 Swelling Percentage: Swelling studies of films were performed using phosphate buffer pH 6.2 for 8 h. The results of which can be seen in Table 3. A graph was between percent swelling vs. time Fig. 4. It was observed that maximum swelling was observed between 4 to 6 h, after which the film weight decreased. 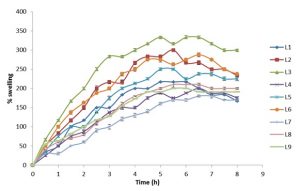 From the above results, it was observed that when the heating time of starch dispersion was increased the PML, PMA, WVP, and swelling of the films also increased. This may be that as we increase the heating time, the amount of starch getting solubilized in water increases, and the viscosity of starch dispersion decreases due to the solubilization of branched portion of starch i.e., amylose. So, the structure of the film formulated is less compact, and film will be having more micro-cracks or pores from where the water can easily evaporate.

It was also observed that the PML, PMA, Water Vapour Permeability, and swelling decreased as the concentration of sago starch is increased. This may be due to the reason that as we increase the polymer concentration, the number of molecules within the same area are more and the structure of film will be more compact, and it will be having less pores from where water can escape or diffuse. Further, as we increase the concentration of starch the viscosity of solution also increased, which resulted in the slow movement of water in the film. 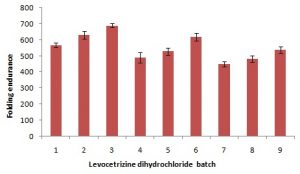 Tensile Strength: Tensile strength of the formulations were determined, and results are shown in Table 4. 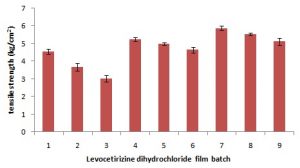 On the other hand, when heating time is increased, the viscosity of solution decreased because of the more solubilization of amylose (gel-forming component of starch), and hence tensile strength of the films decreased.

Drug Content: The drug content of all formulations was determined using a UV spectrophotometer, and it was found that the drugs were uniformly distributed throughout the films as the standard deviation of all the batches is very less and within the limits Table 4.

Scanning Electron Microscopy (SEM): From the study of SEM images, it was observed that the film surface containing Levocetirizine dihydrochloride is smooth and has very few cracks and pores. 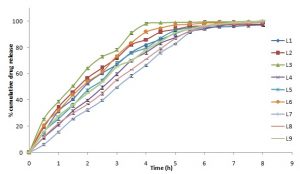 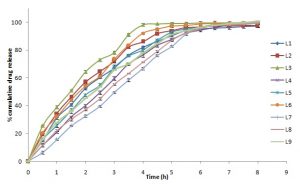 There was no significant difference in in-vitro drug release profiles obtained from both the above-mentioned methods.

CONCLUSION: Mucoadhesive buccal films were successfully formulated and evaluated to deliver the drug in a controlled manner. From the results, it was concluded that the sago starch could be a very useful platform for drug delivery in the oral cavity. The time of drug release can be controlled by varying concentrations of sago starch, as well as heating time.

Buccal drug delivery is a promising area for continued research with the aim of systemic delivery of orally inefficient drugs as well as a feasible attractive alternative for noninvasive delivery of potent peptide and protein drug molecules. However, the need for safe and effective buccal permeation enhancers is a crucial component for a prospective future in the area of buccal drug delivery.

ACKNOWLEDGEMENT: The author thanks Ancalima Lifescience Pvt. Ltd., for providing materials as gift samples for this work. The authors are also grateful to Coral Drugs (India) for their technical assistance.