ABSTRACT: In the present work, the aim was to prepare a self-emulsifying drug delivery system of poorly soluble analgesic, mefenamic acid to improve its solubility with a view to enhance its oral bioavailability. From the solubility studies the selected oil, surfactant and co-surfactant was soyabean oil; tween 80, span 20; glycerol. Blends of surfactant mixtures containing tween 80, span 20, and glycerol were prepared. Three ratios of Smix containing tween 80: span 20: glycerol viz. 1:0.25:1, 1:1:1, 2:2:1; were used to construct pseudo ternary phase diagram to select nine formulation composition. Nine self-emulsifying formulations of mefenamic were prepared and evaluated for optical transparency, low refractive index, uniformity index, low viscosity, and drug release. The best formulations in all aspects of the evaluation were subjected to stability testing. The optimized formulation has been found to have good physical stability and longest shelf life of 13.45 months under accelerated storage conditions with degradation rate constant 1.38 × 10-3 months.

INTRODUCTION: Oral route is the most common route for delivering most of the available drugs into the bloodstream. This is the most suitable route for delivering hydrophilic drugs into the patient’s body as the hydrophilic drugs get absorbed up to a considerable extent by easy diffusion through the gastrointestinal tract. As 40% of the total available drugs are lipophilic and possess low solubility in gastric fluid, it is one of the significant challenges to deliver these drugs through oral route 1. Self-emulsifying drug delivery systems (SEDDS) are a potential tool in improving the bioavailability of low solubility drugs.

SEDDS formulations are isotropic pre-mixtures composed of natural or synthetic oils with lipophilic or hydrophilic surfactants and co-solvents which emulsify spontaneously when exposed to fluids of the gastrointestinal tract to form oil in water emulsions or microemulsions. These systems bypass the first-pass hepatic metabolism as in-situ solubilized drugs can be directly absorbed through the lymphatic pathway.

Besides, all these increased drug loading capacity has been observed in SEDDS formulations as the solubility of poorly water-soluble drugs with intermediate partition coefficients (2<log P<4) are typically low in natural lipids as compared to high solubility in amphiphilic surfactants, co-surfactants and co-solvents 2, 3. A poorly water-soluble compound is one that solubilizes less than 1 part per 10000 parts of water. A poorly water-soluble drug has been defined in general terms, which require more time to dissolve in the gastrointestinal fluid than it takes to be absorbed in the gastrointestinal tract 4. Mefenamic acid is a non-steroidal anti-inflammatory drug with poor water solubility and has been categorized as a BCS class II drug. It belongs to fenamates family (N-phenylantranilic acid derivative) of NSAIDs. Its IUPAC name is 2-(2, 3-dimethylphenyl) aminobenzoic acid. Its GIT absorption is limited by its dissolution in the gastrointestinal fluids exhibiting a low bioavailability after oral administration 5, 6.

Solubility Determination in Various Oils, Surfactants and Co-surfactants: 2 ml of different oils, surfactants, and co-surfactants were taken in separate vials, and an excess amount of mefenamic acid was added to each vial. After continuous mixing in a mechanical shaker for 72 h at room temperature, the vehicles were subjected to centrifugation.

The supernatant was separated and dissolved in ethanol, and solubility was determined by UV Spectroscopy (Shimadzu, 1800) at 283 nm after dilution with ethanol 9.

The pseudo-ternary phase diagram of oil (containing drug), surfactants: co-surfactant and water were developed using water titration method: the mixtures of oil and surfactant / co-surfactant at certain weight ratios were diluted with water in a dropwise manner.

Rheology: The viscosity of the formulated batches was determined using a Brookfield viscometer (small sample adapter assembly) with spindle SC4-27. The formulations were added one by one to the sample adapter at room temperature, and then the measurements were taken.

Droplet Size Analysis: 1 ml of each of the formulations were diluted with 100 ml of water in a volumetric flask and shaken till it gets completely dispersed. The globules of the prepared formulations were observed under Olympus SZX 16 stereo zoom microscope, and the size of globules was determined.

Uniformity Index: Uniformity index is calculated in order to determine whether the prepared emulsion is monodispersed or polydispersed. It is the ratio of average weight diameter to average number diameter.

If uniformity index is one then sample is monodispersed.

Phase Separation: Phase separation is an indication of the stability of the emulsion. It is determined by the centrifugation and by subjecting the diluted formulations to a freeze-thaw cycle.

Centrifugation: The prepared mefenamic acid pre-concentrates were diluted (1 ml in 100 ml) of water and then subjected to centrifugation at 3000 rpm for 30 min and observed visually for phase separation.

Freeze-thaw Cycle: The prepared were mefenamic acid pre-concentrates were diluted (1 ml in 100 ml) of water and then kept at a temperature between 0-8 °C and then allowed to melt at room temperature. This cycle is repeated three times 10.

Drug Content: 5 ml of the prepared formulations were dissolved separately in 25 ml of ethanol in a 100 ml volumetric flask, and volume was made up to 100 ml by ethanol. The mixture is shaken well for 15-20 min and kept for 24 h. The solution was filtered through 0.45 µm filter paper. The filtrate was assayed spectro-photometrically at 284 nm using a UV-Visible spectrophotometer.

The release pattern of the drug from the self-emulsifying formulations was compared to crude drug and marketed suspension purchased from a retail pharmacy in India 9.

Pseudo Ternary Phase Diagram Study: The pseudo ternary phase diagram of the system comprising the oily phase containing drug and Smix 1, Smix 2 and Smix 3 are shown in Fig. 1, 2, and 3 respectively. Area enclosed within the solid line represents the region of self-emulsification.

On the basis of pseudo ternary phase diagram study formulas have been derived from the self-emulsifying area of the pseudo ternary diagram for the three ratios of Smix and nine different formulations composed of Smix 1 (F1, F2, F3), Smix 2 (F4, F5, F6) and Smix 3 (F7, F8, F9) which shows maximum transparency, homogeneity based on visual observations are considered for further, evaluation. 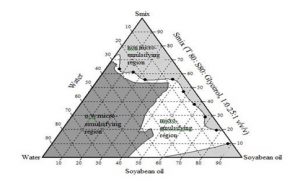 The pH of all the pre-concentrates was found to be in the range of 7.1 to 7.4, which lies in the normal pH range of the physiological fluids.

Optical Transparency: The optical transparency of the SEDDS formulations was determined by using nepeheloturbidimeter at NTU 1000. The readings were taken in triplicate, and the average was calculated. The maximum transmittance found to be 99 ± 1 for formulation F3.

Rheology: Determined viscosity for prepared SEDDS is represented in Table 4. It has been found that as rpm is increased, viscosity decreases. At 50, 60, 100 rpm the viscosity follows the order: F1<F2<F3<F4<F5<F6<F7<F8<F9.

Rpm is rotation per minute, cps is centipoises 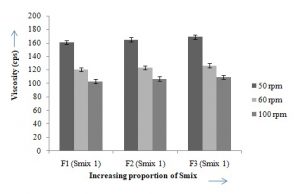 FIG. 4: EFFECT OF INCREASING PROPORTION OF SMIX 1 IN OIL: SMIX BLEND ON VISCOSITY

Droplet Size Analysis: The optical micrograph of an optimized formulation is presented in Fig. 7. The mean globule size of the formulations was calculated, as shown in Table 6.

It was found that a slight difference in globule size (ranging from 0.250-0.259) was observed depending upon the formulation composition and ratio of Smix.

Also, the globule size of Smix 3 formulations is largest. These observations suggest that Smix 1 is the optimum ratio among all the Smix ratios; further, increases in surfactants proportion as in the case of Smix 2 and Smix 3, the globule size increases slightly, which might be due to attainment of critical micelle concentration (CMC). 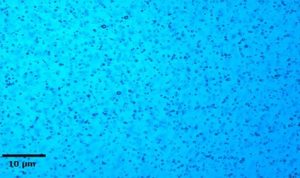 Phase Separation: After subjecting the formulations to centrifugation and freeze-thaw cycles, it has been observed visually that no formulation showed the signs of phase separation.

In-vitro Dissolution Study: The release of mefenamic acid from the prepared formulations was determined by using USP-II dissolution apparatus at 30 rpm and using phosphate buffer pH 6.8 as dissolution medium.

The release of the drug at various time intervals was determined by the aid of UV-Visible spectroscopy, as shown in Table 9. Graphically the release pattern of the drug from formulated self-emulsifying formulations as compared to plain mefenamic acid (crude drug) and the marketed suspension is shown in Fig. 8.

The present study clearly indicated that improvement of the dissolution rate and hence bioavailability of a poorly soluble drugs like mefenamic acid could be achieved by formulating self-emulsifying drug delivery system.

The optimized formulation was then subjected to stability studies and found to have a shelf life of 13.45 months under accelerated storage conditions as per ICH guidelines with degradation rate constant 1.38×10-3 month-1. 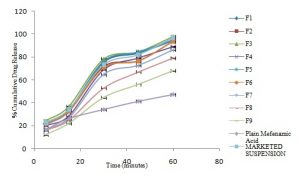 CONCLUSION: In the present study, the aim was to prepare self-emulsifying drug delivery system of mefenamic acid to improve its solubility with a view to enhance oral bioavailability. Nine self-emulsifying formulations were prepared and evaluated from three different ratios of surfactant mixtures containing Tween 80, Span 20, and glycerol. Out of these formulations, formulation, F3 was found to best based on globule size, optical transparency, low refractive index, low viscosity, and drug release. Also, it has been found that the drug release from formulation F3 is quite higher than plain mefenamic acid.

The optimized formulation is then subjected to stability studies and found to have a shelf life of 13.45 months under accelerated storage conditions as per ICH guidelines with degradation rate constant 1.38 × 10-3 month-1.

ACKNOWLEDGEMENT: This work was supported by the Faculty of Pharmacy, Lachoo Memorial College of Science and Technology, Jodhpur, Rajasthan, India; it is gratefully acknowledged.

CONFLICTS OF INTEREST: The author declares there are no conflicts of interest regarding this study.