FORMULATION AND EVALUATION OF SOLID DISPERSION OF OLANZEPINE

FORMULATION AND EVALUATION OF SOLID DISPERSION OF OLANZEPINE

The poor dissolution rate of water-insoluble drugs is still a major problem conforming the pharmaceutical industry. The most common method for improving the solubility is by increasing the surface area of the drug through micronization. But, in practice the effect of micronization is often disappointing, especially when the drugs are encapsulated or tablet. It is generally recognized that low solubility or dissolution rate often becomes a rate-limiting step in absorption of poorly water soluble drugs. Therefore, the enhancement of the dissolution rate of poorly water-soluble drugs after oral administration is one of the most challenging aspects of modern pharmaceutics. Olanzepine (2- methyl- 4- (4- methyl- 1- piperazinyl) - 10H- thieno [2, b] [1, 5]benzodiazepine possess antipsychotic activity and exhibits very slight solubility in water and as a consequence it exhibit low bioavailability after oral administration Therefore, the improvement of olanzepine dissolution from its oral solid dosage forms is an important issue for enhancing its bioavailability and therapeutic efficacy. The purpose of present work is to improve the solubility of Olanzepine by preparing its dispersion with polymer PEG (Poly Ethylene Glycol) using solvent evaporation technique.

INTRODUCTION: The enhancement of oral bioavailability of poorly water soluble drugs remains one of the most challenging aspects of drug development. The rate and extent of dissolution of the active ingredient from any solid dosage form determines rate and extent of absorption of the drug. In the case of poorly water soluble drugs dissolution is the rate limiting step in the process of drug absorption. Potential bioavailability problems are arising with extremely hydrophobic drugs due to incomplete absorption from the GIT. The solid dispersion approach has been widely and successfully applied to improve the solubility, dissolution rate and consequently the bioavailability of poorly water soluble drugs. In solid dispersion method drug is dispersed in inert water soluble carrier at solid state. Solid dispersion technique is show in figure 1. 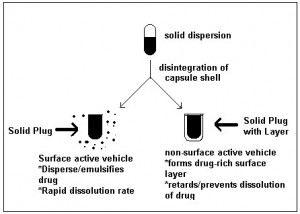 Definition 2: Solid dispersion is defined as “a dispersion of one or more active ingredients in an inert carrier or matrix of solid state prepared by melting (fusion), solvent or melting solvent method.”

Methods of preparation: There are four methods for preparation of solid dispersion.

Melting or Fusion method 3: A physical mixture of an active agent and a water soluble carrier is heated until it is melted. The melt is solidified rapidly in an ice bath under continuous stirring. The obtained mass is pulverized and then sieved. Spray congealing from a modified spray drier on to a cold metal surface has also been used to obtain the product in form of pellets. This avoids grinding step that may alter crystalline modification.

Solvent method 4: Drug and carrier material is dissolved in a common solvent. The solvent is removed by evaporation under reduced pressure at varying temperature. The choice of solvent and its removal rate are critical to the quality of the dispersion.

Advantages: Thermal decomposition of drugs and carriers associated with fusion method can be avoided.

Melting-Solvent Method 2: It has been found that 5-10% of liquid compounds can be incorporated in Poly Ethylene Glycols without significant loss of its solid property. Hence, it is possible to prepare solid dispersion first by dissolving the drug in a suitable liquid solvent and then incorporating the solution directly in to the melt of PEG without removing the liquid solvent.

Mechanism of increased Dissolution rate 7: The enhancement in dissolution rate of solid dispersion as compare to pure drug can be attributed to a number of factors.

The following figure gives schematic representation of the bioavailability enhancement of a poorly water soluble drug by solid dispersion compared with conventional tablet or capsule.

Disadvantages of solid dispersion 8: Major disadvantage is instability. Several systems have shown changes in crystalline and a decrease in dissolution rate on aging. 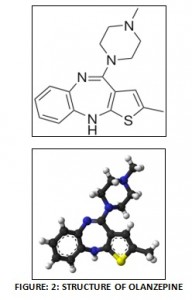 The drug details are provided in table 1 which summarizes its details:

Olanzepine is used in preparation of solid dispersion because it is having less water solubility.

Methods of estimation of olanzepine:

Preparation of Stock solution: 20mg of Olanzepine was dissolved in sufficient quantity of methanol and dilute with phosphate buffer pH 6.8 to mark in 100ml volumetric flask to obtain a stock solution.

Determination of UV absorption maxima: 2µg/ml solution of olanzepine was prepared by addition of 2ml of stock solution in 100ml volumetric flask in phosphate buffer pH 6.8 and was scanned for for absorbance between 200-400nm using Shimadzu UV/Visible spectrophotometer. Olanzepine exhibit UV absorption of maxima 254nm.

Preparation of Calibration curve: Aliquots of 2, 4, 6, 8 and 10ml were transferred to 100 ml volumetric flasks and were serially diluted with phosphate buffer pH 6.8, to the mark to obtain olanzepine conc. 2, 4, 6, 8, 10µg/ml respectively. Absorbance of each solution was measured at 254 nm using Shimadzu UV/visible spectrophotometer against phosphate buffer pH 6.8 as a blank. The absorption of olanzepine is shown in Table 2 & slope as well as R2 is shown in figure 3. 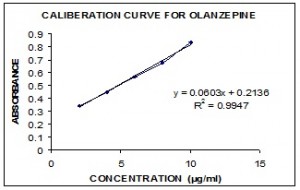 Preparation of physical mixture: Olanzepine and PEG were weighed according to requirements for the preparation of capsules of different ratio [Olanzepine: PEG, P-1 (100mg: 200mg), P-2 (100mg: 300mg), P-3 (100mg: 400mg), P-4 (100mg: 500mg)]. And then capsules were filled with physical mixture and dissolution study was performed using Dissolution Apparatus for three hours and then 5ml sample of each ratio was withdrawn at the interval of 30 min and its absorbance was measured and then finally percentage cumulative release was calculated. It shows in figure 4.

Preparation of solid dispersion: Olanzepine and PEG were weighed according to requirements for the preparation of capsules of different ratio [Olanzepine: PEG, S-1 (100mg: 200mg), S-2 (100mg: 300mg), S-3 (100mg: 400mg), S-4 (100mg: 500mg)]. Then sufficient amount of Methanol was added to dissolve the olanzepine and PEG. Lastly the solvent was evaporated using solvent evaporation method on water bath. Crystals were collected and filled in capsules and dissolution study was performed using Dissolution apparatus for three hours and then 5 ml sample of each ratio was withdrawn at the interval of 30 min and its absorbance was measured and then finally percentage cumulative release was calculated. It shows in figure 5. The formulation of both physical mixture and solid dispersion is provided in table 3. 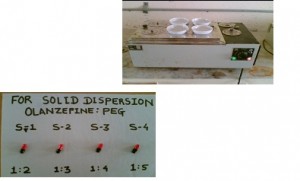 In vitro dissolution study: In vitro dissolution study of Olanzepine capsules were carried out in 900ml 6.8N buffer using USP basket apparatus. The temperature was maintained 37±0.5°C and agitation rate of basket was set to 100rpm. Sample (5ml) was withdrawn at predetermined time intervals, and dilute, if necessary with 6.8 pH buffer. The same volume of fresh dissolution medium was replenished immediately after the sample was withdrawn. The absorbance was measured at 254nm using UV/visible spectrophotometer to determine cumulative % drug released. The amount of drug released was calculated using equation generated from standard calibration curve data. Results are show in table 4 & table 5. 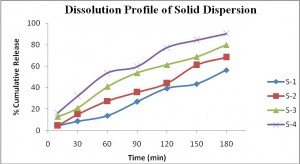 CONCLUSION Olanzepine is practically insoluble in water. However, its very low aqueous solubility and poor dissolution can cause formulation problems and limit its therapeutic application by delaying the rate of absorption and the onset of action. By comparing the formulation and evaluation of solid dispersion of olanzepine with physical mixture of olanzepine, the obtained data showed that there was linearly increased in dissolution profile of solid dispersion and physical mixture compared to plain drug. So, it can be concluded that solid dispersion of olanzepine with ploy ethylene glycolin (PEG) increased the solubility of drug.