INTRODUCTION: Oral route of drug administration has wide acceptance and hence up to 50-60% of total dosage forms are administered orally. The most popular dosage forms being tablets and capsules 1. This technique was first proposed by Kawashima Y et al., Spherical crystallization was defined “it as an agglomeration process that transforms crystals directly into compact spherical forms during the crystallization. It also enables co-precipitation of drug and encapsulating polymer in the form of spherical particle 2, 3.

Spherical crystallization is an effective alternative to improve the dissolution rate of drugs 4. This can be achieved by various methods such as spherical agglomeration, quasi-emulsion solvent diffusion, Ammonia water method, Crystallo-Co agglomeration and neutralization method 5. Agglomerates exhibit improved secondary characteristics, like flowability and compressibility, so that direct tableting or coating is possible without further processing (mixing, agglomerates, sieving, etc.) 6, 7.

Crystallo-co-agglomeration (CCA) technique involves simultaneous crystallization and agglomeration of drug/s with/without excipient/s from the suitable solvent and bridging liquid by addition of a non-solvent.

The spherical agglomerates obtained by CCA can be used as intact beads (encapsulated spansules), or directly compressible tablet intermediates are having satisfactory micrometric (flowability), mechanical (friability, crushing), compressional (compressibility, compatibility) and drug release properties 9. Spherical agglomeration is a process of formation of aggregates of crystals held together by liquid bridges. The agglomerates are formed by agitating the crystals in a liquid suspension in the presence of the binding agent. The binding liquid should be immiscible in the suspending medium but capable of cementing the particles to be agglomerated. The properties of the particles so designed vary greatly as compared to the fine crystalline material. These agglomerates were found to have good flowability and compressibility. This technique can also be exploited to increase solubility, dissolution and hence bioavailability of poorly soluble drugs 10, 11. In the process, Indomethacin was crystallized from acetone, dichloromethane, and water using various polymers. Acetone was used as a good solvent.

Method: 12 The spherical crystallization was carried out by using three partially miscible solvents, i.e. good solvent (acetone), bridging liquid (dichloromethane) and poor solvent (distilled water). Indomethacin was dissolved in acetone and added to an aqueous polymeric solution of HPMC and under continuous stirring. The dichloromethane was added dropwise. After continuous stirring, the spherical agglomerates were formed. This mixture was agitated under 600, 900, 1200 rpm. The drug-polymer ratios used for making agglomerates were 1:0.25, 1:0.5, 1:0.75 Table 1.

TABLE 1: CODED VARIABLES THEIR TRANSLATION INTO ACTUAL LEVELS AND RESPONSE VARIABLE WITH CONSTRAINTS

Micromeritic Properties: Flowability assessment was done by the angle of repose, Carr’s compressibility index (CCI) and Hausner’s ratio (HR). The angle of repose was determined using the 'fixed funnel free-standing cone method.' CCI and HR of agglomerates were determined from the values of bulk density and tapped density 13.

Drug Content: Spherical agglomerates (50 mg) was triturated with 10 ml of water. Allowed to stand for 10 min with occasional swirling and methanol was added to produce 100 ml five milliliters of this solution was mixed with equal volumes of methanol and phosphate buffer pH 7.2 to produce 100 ml. The absorbance of the resulting solution was measured at 320 nm. Drug content was determined from the standard plot.

Fourier Transforms Infrared Spectroscopy (FTIR): The FTIR spectral measurements were taken at ambient temperature using a Shimadzu, Model 8033. Samples were dispersed in KBr powder, and the pallets were made by applying 5-ton pressure. FTIR spectra were obtained by powder diffuse reflectance on FTIR spectrophotometer.

0.1 mL of each standard working solution of Indomethacin (1-100 µg/mL) was transferred in a series of Eppendorf tubes (Eppendorf-Netheler-Hinz, Hamburg, Germany) containing 0.2 mL of rat plasma, separately. In each flask, 0.1 ml stock solution of Mefenamic Acid (50 µg/mL) was added, and 0.6 mL of methanol was added for complete precipitation of proteins. Tubes were vortexed for 10 min on the vortex mixer and then centrifuged for 20 min at 2500 rpm. The supernatant solution was directly injected on a chromatographic column. The peak area ratios of Indomethacin to Mefenamic acid were calculated, and the calibration curve was plotted of response factor against the concentration of the drug. Blood samples (1 ml) were collected in EDTA coated bottles through retro-orbital route during a dosing interval at the following times: 0 (before drug administration), 0.5, 1, 2, 4, 6, 10, 12, and 24 h post dose. Samples were centrifuged for 15 min at 3000 rpm to collect plasma and then frozen at −20 °C until analysis. Plasma samples were analyzed for Indomethacin concentrations by H.P.L.C. under above-mentioned conditions.

RESULTS AND DISCUSSION: Spherical agglomeration technique was used for the preparation of Indomethacin spherical agglomerates. Spherical crystallization system contained the good solvent, bad solvent and bridging liquid. The selection of these solvent depends upon miscibility of the solvent and solubility of Indomethacin. So for CCA acetone, water and dichloromethane selected as a good solvent, bad solvent and bridging liquid. Indomethacin shows poor flow properties, and solubility and spherical agglomeration are known to significantly improve the flow properties of drug and dissolution. The agglomerates prepared using an optimum amount of HPMC (0.5:1) show adequate sphericity and mechanical strength.

TABLE 2: COMPARISON OF PROPERTIES OF INDOMETHACIN AND SPHERICAL AGGLOMERATES

Optimization Study 14: For optimization study Box-Behnken design was used concentration of HPMC, stirring speed and quantity of bridging liquid were selected as factors. The level of HPMC concentration was selected 0.25 g, 0.5 g, and 0.75 g.  The levels of stirring speed were selected to be 600, 900 and 1200 rpm. And the level for bridging liquid was selected to be 2, 4 and 6 ml. Carr’s index, % dissolution, and MYP value were selected as the response. Variables and their levels used in Box–Behnken experimental design Table 3.

Influence of Independent Variables on the Dissolution Study: The value of correlation coefficient, R2 for dissolution was found to be 0.9050 which indicated a good fit of the model. 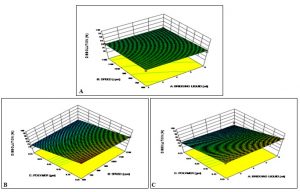 At high polymer ratio, the lumps were formed, and viscosity increased which caused the sticky product. At high-speed stirring caused the breaking of particles.

Influence of Independent Variable on the Carr’s Index: The value of correlation coefficient, R2 for Carr’s Index was found to be 0.7746 which indicated a good fit of the model.

The equation for Carr’s Index:

Fig. 2 illustrates the interplay between various factors studied for their effect on Carr’s Index. The equation shows that speed, bridging liquid and polymer increase with an increase in Carr’s Index. Hence, low concentration of polymer and low speed produced a better result for Carr’s index. 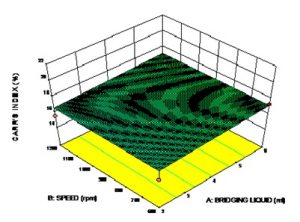 Influence of Independent Variables on the MYP: The value of correlation coefficient, R2 for MYP was found to be 0.9533 which indicated a good fit of the model.

Scanning Electron Microscopy 15: Particles of pure drug sample are of the smallest size, and they have irregular shapes. Drug-polymer agglomerates prepared were spherical with a rough surface. Sizes of prepared agglomerates were larger than the pure drug Indomethacin. 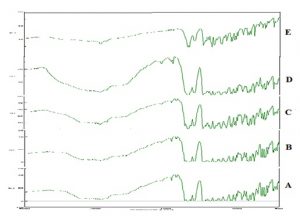 FTIR Spectroscopy Study: The characteristic peaks of the drug viz. C-H stretch (3079.76), C=C stretch (1607.38), C-O stretch (1252.54), C=O (1705), C-Cl stretch (752.102), C-H stretch (2852.2) & C=O stretch (1691.37) were retained with trivial shifts in wave numbers as seen in Fig. 5. There were neither any shifts nor disappearances of characteristic peaks. Appearances of any new peaks were not observed, suggesting that interaction between Indomethacin and other excipients or degradation in drug molecule did not take place. Hence, drug excipients compatibility was established signifying no interaction between the drug and other excipients.

PXRD Study: Investigation of the X-ray diffractogram Fig. 6 revealed some changes in the location of the peak of different crystal forms of agglomerates with respect to Indomethacin. Change in the intensity of peak, which indicates a different arrangement of molecule hence confirming the development of different polymorphic form. Also, it indicates that the decrease in intensity of agglomerates peak, so a decrease in crystallinity of peak. 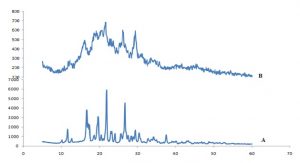 Pharmacokinetic Study: The AUC and Cmax of Indomethacin agglomerates significantly exceeded that from Indomethacin marketed formulation while the tmax did not change appreciably; this is attributed to faster dissolution and better absorption of indomethacin from agglomerates Fig. 8 and Table 5. 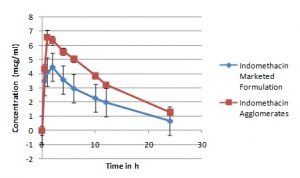 ACKNOWLEDGEMENT: Authors are thankful to the Principal, Government College of Pharmacy, Karad for providing necessary facilities to experiment.