Stavudine an anti-retroviral drug is used for treating HIV now-a-days. The present approach aims to formulate an orally disintegrating tablet of stavudine for better patient compliance and bypassing the hepatic metabolism. In order to have an orally disintegrating tablet of stavudine, there is a need to mask the bitter taste. For the masking of bitter taste mannitol is used as taste masking agent. In the formulation of   ODTs, a semi-synthetic super disintegrant sodium starch glycolate and a natural disintegrant, sodium alginate was used. Formulations F1, F2, F3, S1, S2 and S3 were evaluated for the required quality control tests.F3 and S3 were found to have a disintegration time of 7secs and 6secs, respectively. Upon observing the dissolution profiles and disintegration time of formulations, F3 and S3 showed good results.

INTRODUCTION: Stavudine (d4T), a synthetic thymidine nucleoside analogue, active against the human immunodeficiency virus type 1 (HIV-1). The chemical name for stavudine is 2', 3'-didehydro-3'-deoxythymidine.It comes under the category of nucleoside analogue reverse transcriptase inhibitor (anti-viral drug).Conventionally it is used for treatment of HIV infection in combination with other anti-retro viral drugs. Presently drug is formulated in the form of oral disintegrating tablets.

Pharmaceutical technologies have developed a novel dosage form known as orally disintegrating tablets (ODTs) which disintegrate rapidly in saliva, usually in a matter of seconds, without the need to take it with water. ODTs are distinguished from conventional sublingual tablets, buccal tablets and lozenges, which require more than a minute to dissolve in oral cavity. This tablet dissolves within 60seconds when placed in the mouth.

The active ingredients are absorbed through mucous membranes in the mouth and GIT and enter the blood stream. Drug dissolution and absorption as well as onset of clinical effect and drug bioavailability may be significantly greater than those observed from conventional dosage forms. In general, the tablets are physically robust and can be packed in multi dosage containers.

The technology incorporated in the formulation of stavudine ODTs is wet granulation technique. In this technique the tablets were prepared by using natural disintegrant sodium alginate and a semi synthetic disintegrant sodium starch glycolate. The taste masking agent used in the formulation was mannitol. Stavudine ODTs are formulated to minimize the bitter taste and bypass the first pass hepatic metabolism. The taste masking effect of mannitol was done by granulation technique which was evaluated with the drug substance.

The main objective is to check the quality control parameters of the formulated granules and tablets.

PREPARATION OF GRANULES: Stavudine (30mg) was dry blended with appropriate quantity of excipients and wet massing of powder blend was done using 10% starch solution. The wet mass was subjected to coarse screening using a suitable sieve (no. 22) and semi dried at 50oC – 55oC for 15 min. Dried granules were again passed through sieve no.44.

Calibration curve of Stavudine: In standard graph, linearity was obtained between 5-40µg/ml concentration of stavudine and the regression value was found to be R2=1. 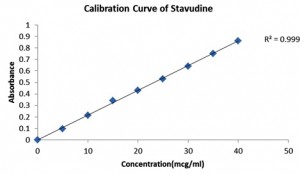 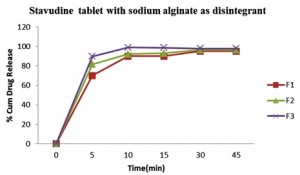 FIG. 2: DISSOLUTION PROFILES FOR STAVUDINE WITH SODIUM ALGINATE AS DISINTEGRANT 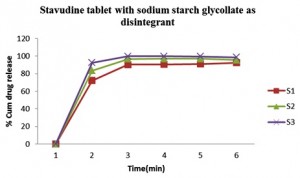 CONCLUSION: Stavudine oral disintegration tablets were formulated by compression technique to bypass the hepatic metabolism. The hepatic bypass effect and bioavailability have been studied. The inclusion of camphor and mannitol in the tablets will help to minimize the bitter taste. The semi-synthetic disintegrant, sodium starch glycolate containing stavudine tablets complies with the standard limits for the granule and tablet parameters when compared with the directly compressible and natural disintegrant sodium alginate containing tablets.

ACKNOWLEDGEMENT: The authors are very thankful to the management of PSG College of pharmacy, Coimbatore, Pellamedu, Tamil Nadu, India, for providing necessary facilities to carry out the research work.