ABSTRACT: Fluvoxamine Maleate, an oral serotonin reuptake inhibitor, has been used widely for the treatment of anxiety. Sustained-release matrix-type drug delivery system has advantages over conventional modes of drug administration, enhancing drug bioavailability as it avoids the first-pass metabolism and improves patient compliance. Optimization of the formulation was performed by varying the concentration of natural polymer Moringa oleifera gum and HPMC K100, i.e., releases retarding polymers. Sustain release matrix tablets were formulated, and the drug release profiles of formulations F3 and F6 were found to be 93.8008% and 96.94108%, respectively.

INTRODUCTION: Oral administration of a drug has been the most convenient and commonly employed route of drug delivery as it offers them greater flexibility in the dosage form design 1. The design of sustained-release systems depends upon various factors as the route of administration, the type of delivery systems, the disease being treated, the patient, the length of therapy, and properties of drug 2. Plant gums and mucilage are being used due to their abundance in nature, safety, and economy 3. Moringa oleifera gum performed as a good muco-adhesive polymer, disintegrating agent, and binder 4. Development of sustained-release oral dosage form for fluvoxamine maleate would result in a reduction in the drug blood concentration fluctuations, especially in long-term therapy, which will lead to the minimization of the drug side effect and patient compliance 5.

V. Spectroscopy: 6Accurately weighed 10 mg of Fluvoxamine Maleate in 100 ml water in a volumetric flask to obtain a stock solution of 100μg/ml. appropriate aliquots were taken into different volumetric flasks, and volume was made up to 10 ml with water so as to get drug concentrations of 5 to 25 μg/ml. Absorbance was measured.

Differential Scanning Calorimetry (DSC): 7 DSC analysis was performed using Shimadzu-Thermal Analyzer DSC 60 on 2-5mg samples. Samples were heated in an open aluminum pan at a rate of 10 °C/min conducted over a temperature range of 30 to 300 °C under a nitrogen flow of 2-bar pressure. The thermogram is shown in Fig. 6.

Identification of polymers HPMC K 100 and Moringa oleifera was subjected to Organoleptic properties, melting point, and FTIR spectroscopy as mentioned in Fig. 7, Fig. 8.

(Note: all quantities are in mg)

Thickness: The thickness of the tablets was measured using vernier calipers. Results are mentioned in Table 3.

Hardness Test: The hardness was tested using Monsanto tester. “Hardness factor”, the average of the six determinations, was determined. Results are mentioned in Table 3.

Uniformity of Weight: Twenty tablets were weighed individually. The average weight was calculated from the total weight of all tablets. The individual weights were compared with the average weight. The percentage difference in the weight variation should be within the acceptable limits (+5%).

The percent deviation was calculated using the following formula,

Measurement of Bioadhesive Strength of Tablet (Detachment Force): 10-12 The mucoadhesive forces of the tablets were determined by the measuring device shown in the following figure. 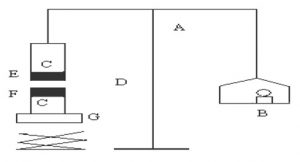 Swelling indices of different formulations are shown in Fig. 10; Results are mentioned in Table 5.

In-vitro Dissolution Study: 13, 14 In-vitro drug release study of the samples was carried out using USP – type I dissolution apparatus (Basket type). The dissolution medium, 900 ml of simulated gastric fluid (without enzyme), was placed into the dissolution flask, maintaining the temperature of 37 + 0.5 °C and rpm of 50. One Fluvoxamine Maleate tablet was placed in each basket of the dissolution apparatus. The apparatus was allowed to run for 12 hours. Samples measuring 5 ml were withdrawn after every hour manually, and samples were filtered. The fresh dissolution medium was replaced every time with the same quantity of the sample withdrawn. Collected samples were analyzed at 246 nm using 6.8 phosphate buffer as blank. The cumulative percentage of drug release was calculated. Results are mentioned in Fig. 11 and Table 6. 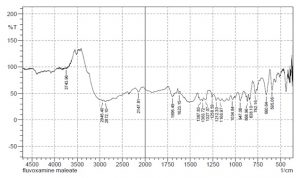 Characterization of Polymers and Identification of Polymers: Results of identification tests of HPMC K100 and Moringa oleifera gum were compared with the reported standards. The results obtained were found to be matched with the standards or reported values. FTIR spectrum of a received sample of polymers (HPMC K100 and Moringa oleifera gum) shown in Fig. 3, Fig. 4.

Compatibility Study of Drug with Polymers: 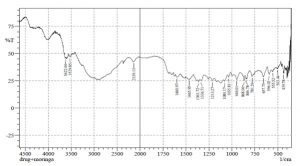 There were no variations in the IR spectrums of drug and drug-polymer/excipients mixture compared to the initial. So there was no interaction between the materials.

Differential Scanning Calorimetry (DSC): Thermal analysis of drugs was carried out using DSC. The DSC curve of Fluvoxamine Maleate profiles a sharp endothermic peak at 121 °C, correspondings to its melting point and indicating its crystalline nature and purity of the sample. The heat required for melting was -76.76J/g. The DSC thermogram is shown in Fig. 7. 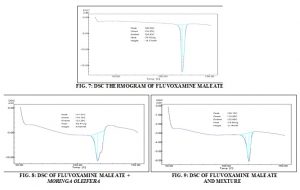 Evaluation of Granules for Flow Properties: The granular characteristics of the drug affect the formulation of tablets. The results shown in Table 2 indicated that granules had good flow properties. The angle of repose ranged from 23.70 to 28.26, and the compressibility index ranged from 13.13 to 16.73. The Bulk density and tapped density of the powder blend ranged from 0.387 to 0.392 and 0.450 to 0.466, respectively.

Evaluation of Final Formulation Tablets: The tablet formulations were subjected to various evaluation tests, such as thickness, Diameter, content uniformity, weight variation, hardness, friability, and in-vitro dissolution. The results for all the formulations are shown in Table 3.

Measurement of Bioadhesive Strength of Tablet (Detachment Force): Moringa oleifera and HPMC K100 exhibiting inheriting bioadhesion was chosen as drug retreading polymers. It was observed that optimized formulation has adhesion force 2.25 and 2.40 dyne/cm2. The above study shows that the tablet will remain intact with the gastric mucosa and remain to adhere with mucosa to keep the tablet remain in the stomach as the drug is better absorbed.

From Table 5, it was observed that F3 and F8 have a significant % swelling index due to the high concentration of HPMC K100 and Moringa oleifera. Swelling is vital factor to drug dissolution and also influences drug release kinetics. A greater extent of swelling is observed with the highest concentration of HPMC K100. Moringa oleifera led to an increase in tablet dimension, thus increasing diffusion pathways and decreasing drug release. % Swelling index was calculated at 2, 4, 6, 8, 10, 12 h; it has been observed that % S.I. increase with time. HPMC K100 and Fluvoxamine swell immediately, and this is assisted by CMTKP. Thus tablet swells continuously over 12 h. 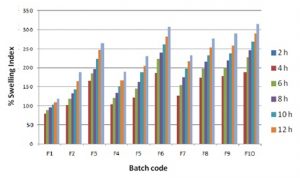 In-vitro Dissolution Study: HPMC K 100 and Moringa oleifera are hydrophilic polymers. When these polymers come in contact with water, allow gradual hydration of the tablet matrix, leading to swelling of the tablet. Water decreases the glass transition temperature of the polymers to the experimental temperature. At this temperature, a glassy polymer is transformed into a rubbery state. Mobility of polymeric chains is enhanced in this state. This favors the transport of water into the tablet and consequently transport of the dissolved drug from tablet core to the dissolution medium. Drug release from matrix tablet is determined by drug characteristics, delivery system and destination (site of drug release). Drug content of each tablet was 100 mg and 900 ml of dissolution.

From Fig. 11, it was observed that (F1, F2, F3) as the concentration of Moringa oleifera increased, the drug release decreased. (F3, F4, F5) as the concentration of HPMC K100 increased, the drug release decreased. This leads to increase in diffusion path length thus decrease in dissolution rate. Formulations (F7, F8, F9 and F10) have the combination of HPMC K100 and Moringa oleifera highest drug release retardant property. F3 shows 93.8008%, and F8 Shows 91.117% drug release over 24 h. It has a significant % swelling index and also maintains matrix integrity for 24 h. These findings are in compliance with the ability of HPMC to form a complex matrix network, which leads to an increase in the diffusion path so the amount of drug released decreases.

CONCLUSION: In conclusion, the research project was carried out with the objective of developing oral sustain release matrix tablet formulation of Fluvoxamine Maleate by using natural polymer Moringa oleifera gum and HPMC K100; and evaluation their sustain release potential. It can be concluded that,