ABSTRACT: Ambroxol hydrochloride is a potent mucolytic agent capable of inducing bronchial secretions used in the treatment of respiratory disorders. The Sustained release matrix tablets containing 75 mg Ambroxol hydrochloride were developed using different drug: polymer ratios. Sustained release matrix tablets were prepared by wet granulation method. Granules were prepared and evaluated for loose bulk density, tapped bulk density, compressibility index and angle of repose, shows satisfactory results. The prepared tablets were further evaluated for uniformity of weight, hardness, friability, thickness, content uniformity, In-vitro dissolution, drug-excipients interactions, swelling index study also carried out. The FT-IR studies revealed that there was no chemical interaction between drug and excipients. In-vitro release studies were carried out using USP XXII type II (paddle method) dissolution apparatus at 50 rpm. The release data was fitted to various mathematical models such as, Higuchi, Korsmeyer-Peppas, First-order, and Zero order to evaluate the kinetics and mechanism of the drug release. Among all the formulations, F4 shows 99.15% better-controlled release at the end of 12 h. The drug release of optimized formulations F-4 follows zero order kinetics. The stability studies were carried out according to ICH guideline, which indicates that the selected formulations were stable.

INTRODUCTION: Oral route is the most preferred route for administration of drugs.  Tablets are the most popular oral formulation available in the market and preferred by the patients and physician alike. In long-term therapy for the treatment of chronic disease conditions, conventional formulations are required to be administered multiple doses and therefore have several disadvantages 1.

In long-term therapy for the treatment of chronic disease conditions, conventional formulations are required to be administered multiple doses and therefore have several disadvantages 1. Sustained release drug delivery aimed at controlling the rate of release as well as maintains desired drug level in the blood that is therapeutically effective and non-toxic for an extended period, thus achieving better patient compliance and allowing a reduction of both the total dose of drug administered and the incidence of adverse side effects. It provides prolonged but not necessarily uniform release of the drug. The rationale for the development of a sustained release formulation of a drug is to enhance its therapeutic benefits, minimizing its side effect while improving the management of the diseased condition 2, 3.

The use of polymeric matrix devices to control the release of a variety of therapeutic agents has become increasingly important in the development of the modified release dosage forms 4. The matrix tablet by direct compression has attracted much attention due to its technological simplicity in comparison to other controlled release systems. It requires fewer unit operations, less machinery, reduced number of personnel and processing time, increased product stability, and production rate 5.

Hydrophilic polymer matrix systems are widely used in oral controlled drug delivery because of their flexibility to obtain a desirable drug release profile, cost-effectiveness, and broad regulatory acceptance. The purpose of controlled release systems is to maintain drug concentration in the blood or the target tissues at the desired value as long as possible 6.

Hydrophilic matrices are an interesting option when developing an oral sustained release formulation. The drug release from such matrices can be controlled through their physical properties. Polysaccharides are the choice of materials among the hydrophilic polymers used because they are nontoxic and acceptable by the regulating authorities. The various polysaccharides used in drug delivery application are cellulose ethers, xanthan gum, locust bean gum, and guar gum. Another natural polysaccharide Tamarind seed polysaccharide (TSP) obtained from the seed kernel of Tamarindus indica, possesses properties like high viscosity, broad pH tolerance, non-carcinogenicity, mucoadhesive nature, and biocompatibility. It is used as stabilizer, thickener, gelling agent and binder in the food and pharmaceutical industries. The tamarind seed polysaccharide constitutes about 65% of the tamarind seed components 7.

Ambroxol is a metabolite of bromhexine with similar actions and uses. It is chemically described as Trans‐4‐[(2‐amino‐3, 5‐dibromo benzyl) amino]‐cyclohexanol. Ambroxol hydrochloride is an expectorant improver and a mucolytic agent used in the treatment of respiratory disorders such as bronchial asthma, chronic bronchitis characterized by the production of excess or thick mucus. It has been successfully used for decades in the form of its hydrochloride as a secretion releasing expectorant in a variety of respiratory disorders. Adverse effects produced such as gastrointestinal disorder, headache, dizziness, sweating, rhinorrhoea, lacrymation, and allergic reactions 8, 9.

It was postulated that Ambroxol HCl decreased airway hyperreactivity by either increasing lysophosphatidylcholine turnover and modifying epithelial secretion where the successful treatment needs a constant and uniform supply of the drug. Ambroxol HCl is sparingly water solubility. Hence it presents significant formulation challenges. Ambroxol HCl has a half-life of 4 h, and the usual oral dosage regimen is 75 mg 10. Therefore, it is an ideal candidate to be designed to sustain release dosage form, which would result in prolonged clinical efficacy, reduced frequency of dosage, and lesser side effects. The present study aims to develop sustained release matrix tablets of Ambroxol hydrochloride using natural polymer.

Extraction of Tamarind Seed Polysaccharide: To 20 g of tamarind kernel powder, 200 ml of cold distilled water was added, and the slurry was prepared. The slurry was poured into 800 ml of boiling distilled water. The solution was boiled for 20 min under the stirring condition in a water bath. The resulting thin clear solution was kept overnight so that most of the proteins and fibers settled out. The solution was then centrifuged at 5000 rpm for 20 min. The supernatant was separated and poured into twice the volume of absolute ethanol by continuous stirring. The precipitate was washed with absolute ethanol, diethyl ether and then dried at 50-60 ºC under vacuum. The dried material was ground and sieved to obtain granules of the different particle size range. The particle size range of 150-75 microns was used for the preparation of tablets 11.

Preparation of Matrix Tablets: Tablet formulations were prepared by wet granulation method. The proportion of excipients with the drug was as given in Table 1. The drug and all other ingredients were sifted through sieve 60. The sifted ingredients were mixed thoroughly in a mortar with a pestle for 15 min. PVP mixed with Isopropyl alcohol and added into well-mixed powder till the desired wet mass was formed. This wet mass was sifted through sieve 16. The prepared granules were dried at 60 ºC for 1 h in a hot air oven, and then it was sifted through sieve 16 and transferred the granules into a polybag. Magnesium stearate and talc were sifted through sieve 40 and mixed with the prepared granules in a polybag for 5 min. Finally, tablets were compressed at 600 mg weight on a 10 station mini rotary tableting machine (Shakti Pharmatech Pvt. Ltd, Ahmedabad) with 12.1 mm flat-shaped punches.

Evaluation of Tablets: All prepared matrix tablets were evaluated for its uniformity of weight, hardness, friability, and thickness according to official methods shown in Table 3.

Drug Release Kinetics: The release kinetics was fitted to different mathematical models like Zero order, First order, Higuchi‘s and Peppas plot. The kinetic treatment of selected optimized formulation F-4 shows that the regression coefficient for zero-order kinetics was found to be higher when compared with those of the first-order kinetics. The slope (n) value of Korsmeyer Peppas plots of optimized formulation F-4 was found to be 0.722, respectively, indicate that the mechanism of release was Anomalous (non-Fickian) diffusion.

TABLE 2: DATA FOR BLEND EVALUATION OF FORMULATION (F-1 TO F-8)

Differential Scanning Calorimetry:  Thermogram of Ambroxol hydrochloride is shown in Fig. 1 which indicates the melting point of the pure drug is 240 ºC and the melting peak of optimized formulation (F-4) is at 206 ºC was observed in Fig. 2. Change in temperature is due to drug and polymer mixture. DSC studies revealed that there was no much shift in the melting point of the drug in the physical mixture compared to the pure drug; this indicates that there is no interaction between drug and matrix materials. 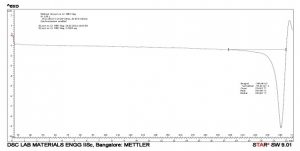 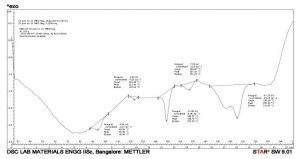 Scanning Electron Microscopy (SEM) of the Optimized Formulation: The Scanning Electron Microscopic (SEM) Analysis was conducted using a JOEL (Model - JSM 840A) Scanning Microscope for the optimized formulations in three states involving Dry tablet surface, Tablet after swelling for 2 ho and Tablet after swelling for 6 h and 12 h, so as to determine particle size distribution, surface topography, and texture and to examine the morphology of fractured or sectioned surfaces.

As with SEM high vacuum is required for image formation and samples must be thoroughly desiccated before entering the vacuum chamber. Therefore samples were thoroughly dried after swelling for analysis. The dried samples were mounted on a sample holder using double-sided adhesive carbon tape.

The condenser lens position was maintained at a constant level. SEM study further confirmed both diffusion and erosion mechanisms to be operative during drug release from the optimized batch of matrix tablet (F-4). SEM photomicrograph of the matrix tablet taken at different time intervals after the dissolution experiment showed that matrix was intact and pores had formed throughout the matrix. 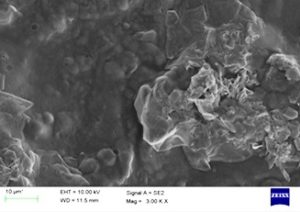 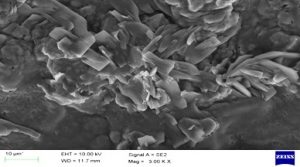 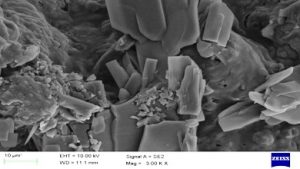 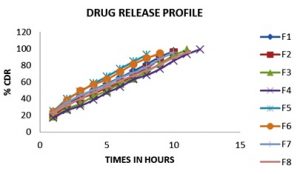 Determination of the Release Kinetics: The release data was fitted to various mathematical models to evaluate the kinetics and mechanism of drug release. The kinetic data of all formulations F-1 to F-8 could be best expressed by zero order equation as the plots showed the highest linearity (R2: 0.989 to 0.998) then first order release kinetics (R2: 0.698 to 0.919). The n values obtained from Korsmeyer Peppas plots range from (0.598 to 0.722) indicate that the mechanism of release of formulations F-1 to F-8 was Anomalous (non- Fickian) diffusion.

CONCLUSION: The matrix tablets were found to be effective in sustaining the drug release up to 12 h. This is mainly due to the formation of a thick gel structure that delays drug release from tablet matrix; Drug release was found to be diffusion coupled with erosion. Stability studies revealed that there was no significant change in drug content and dissolution profile of matrix tablets. DSC and FTIR studies revealed that there was no shift in peaks, indicating there is no interaction between Ambroxol hydrochloride and other ingredients used. SEM photomicrograph of the matrix tablet taken at different time intervals after the dissolution experiment showed that the matrix was intact, pores had formed throughout the matrix and also found the formation of gelling structure. It can be concluded that stable formulation could be developed by incorporating hydrophilic polymer Tamarind seed polysaccharide and Guar gum in a definite proportion so that the controlled released profile is maintained for an extended period.

ACKNOWLEDGEMENT: The authors are thankful to the Management, Sree Siddaganga College of Pharmacy, Tumkur, for providing necessary facilities to carry out this work.