ABSTRACT: Repaglinide is used in the treatment of type 2 Diabetes mellitus and has very short half life. The patient compliance can decrease when larger doses are administered two to three times a day. Sustained release formulation which maintains a plasma level of 8-10 h might be recommended for daily administration of repaglinide. The main objective of the present study was to develop sustained release formulation using hydrophilic release retardant natural and synthetic polymers i.e., Ocimum basilicum seed mucilage and HPMC K4M alone and in combinations respectively. Direct compression technique was used to prepare tablets which were evaluated for precompression and postcompression parameters. Nine formulations were prepared in which F1-F3 were prepared using Basil seed mucilage, F4-F6 by HPMC K4M and F7-F9 using both the polymers (Basil seed mucilage and HPMC) at 1:3, 1:6 and 1:9 to the drug and polymer ratios respectively. F8 was selected as the best formulation which sustained the drug release upto 98.61% in 10 h out of nine formulations (F1-F9). The selected formulation which was subjected to accelerated stability studies at Rh 75% ± 5% and 40 ºC ± 2 ºC for one month was found to be stable.

Sustained release drug delivery systems (SRDDS) are designed to increase the concentration of in the systemic circulation for prolonged period of time 2. Repaglinide is a drug used to treat type 2 Diabetes mellitus has a short half-life of 2 h. The present study involves formulation and evaluation of sustained release formulation using hydrophilic natural and synthetic polymers such as Ocimum basilicum seed mucilage and hydroxy propyl methyl cellulose K4M (HPMC K4M) as release retardants 3.

Materials: Basil seeds were procured from the Ayurvedic pharmacy. Repaglinide was obtained as gift sample from Aurobindo laboratories.

Isolation of Mucilage from Ocimum basilicum Seed mucilage: 4, 5, 6 To remove the foreign particles, basil seeds were taken in clean bowl and rinsed with adding required amount of water. The rinsed seeds were soaked in water for 20 - 40 min at the ratio of 1:10 to the basil seeds and water. The soaked seeds were homogenized at high agitation speed of 1500 rpm to separate the seeds and gel layer.

The obtained gel layer was filtered using muslin cloth to remove the unwanted particles and precipitated by using required amount of acetone. The precipitate was dried in Hot air oven at 40 ºC. The dried mucilage was powdered using motor and pestle, sieved using 60 mesh and stored in airtight container.

1. Organoleptic Evaluation: The isolated mucilage was evaluated for its colour, odour and taste.

3. Phytochemical Evaluation: The solution of 1% w/v extract was prepared using distilled water and evaluated for carbohydrates, gums and mucilage.

X-Ray Diffractometer was used to record XRD of powder (PXRD). SEM was used to determine the surface topology and morphology.

Fourier Transform Infrared Spectrophotometer (FTIR): 8, 9 FTIR spectrophometer (Bruker alpha) is used to determine the compatibility of drug with the excipients. Pellets were prepared by using KBr and sample at high compaction pressure at the ratio of 1:100 by Disc method. The prepared pellets were subjected for IR Spectral studies in the wave number range of 4000 - 400 cm-1. The spectra obtained for repaglinide and the excipients were compared.

Preparation of Repaglinide Tablets: Direct compression technique was used to prepare different tablet formulations. Prior to the formulation, all the powders were passed through 60 mesh and required amounts of repaglinide and polymers were mixed thoroughly with the diluent MCC. After proper mixing, the lubricant magnesium stearate, the glidant talc and the filler lactose were added slowly to the above mixture and mixed properly for few minutes in a polybag. Finally the above blend was subjected to compression using Rotary Tablet Machine.

Pre-compression Parameters: All the powders of tablet were evaluated for angle of repose, bulk density, tapped density, carr's index and hausner's ratio.

In vitro Drug Release Study: 12, 13 Dissolution test was used to determine the drug release for which USP type-II dissolution apparatus at 50 rpm. The dissolution medium was kept for first two hours with 0.1N HCl which was prepared by taking 8.5ml of HCl in 1000 ml water. Later the medium was replaced with pH 6.8 Phosphate buffer solution which was prepared by using 6.8g of potassium dihydrogen phosphate and 0.8g of sodium hydroxide. At predetermined intervals, 5ml of sample was withdrawn, filtered and analyzed spectrophotometrically using UV spectrophoto-meter. Immediately equal amount fresh dissolution medium was replaced after every withdrawal of test sample. Percentage drug release was calculated.

The plots made were as below:

Accelerated Stability Studies: 14 The selected formulation is said to be stable when it remains the same in a specific container within its physical, chemical, therapeutic and toxicological specifi-cations. The accelerated stability studies provide an evidence on the quality of drug substance which varies with time under different environmental factors like humidity, temperature, recommended storage conditions and light. In the present study, the FDT is stored in specific conditions of Rh 75% at 40 ºC. After a period of one month, the tablets were analyzed for thickness, weight variation, hardness, friability, drug content and dissolution studies.

Scanning Electron Microscopy (SEM): SEM photographs of Basil seed mucilage shows that the mucilage powder is irregular in shape and has porous nature. 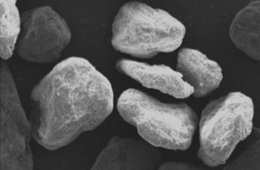 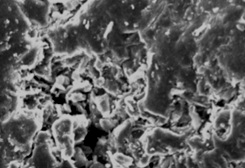 FT-IR (Fourier Transform Infrared Spectro-photometer): The FTIR spectrum showed that all the principle peaks of the pure drug repaglinide were retained in the physical mixture of repaglinide with Basil seed mucilage and HPMC which were prepared at 1:1 ratio. It was observed that the drug and polymers were compatible. The drug and the combination of excipients showed negligible variation when compared to to the pure drug which shows good compatibility of drug and excipients. 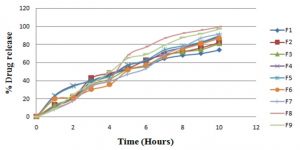 Model Fitting for Drug Release: Drug release kinetic equations were used to fit the results of dissolution data. Regression coefficient (R²) value was found to high for Korsmeyer-peppas release equation in F8 formulation and the mechanism of drug release was diffusion. The results were tabulated in Table 6.

Formulation F8 was subjected to various stability studies under the conditions of 40 ± 2 oC/75 ± 5% RH for 30 days. It was tested for general appearance, weight variation, hardness, friability, drug content and percentage drug release after a period of 30 days. The formulation showed no considerable variations, hence the formulation F8 was found to be stable.

CONCLUSION: The aim of the present study was to formulate and evaluate the sustained release tablets of repaglinide by using hydrophilic natural and synthetic polymers to achieve prolonged therapeutic effect by continuously releasing the medication over an extended period of time after administration of single dose. The basic goal of therapy is to achieve steady state blood levels that is therapeutically effective and non toxic for a prolonged period of time. The design of proper dosage regimen is an important element in accomplishing this goal.

ACKNOWLEDGEMENT: We are thankful to Centre for Pharmaceutical Sciences, JNTU, Hyderabad for providing the necessary facilities for carrying out this work. We are also thankful for Aurobindo laboratories for providing the gif sample of repaglinide.