INTRODUCTION: Oral route of drug administration is the most common and oldest route of drug administration. It poses several advantages. Most of the orally administered drugs, targeting is not a primary concern and it is usually intended for drugs to penetrate to the general circulation and perfuse to other body tissues. For this reason, most systems employed are of the sustained release variety. It is assumed that increasing concentration at the absorption site will increase circulating blood levels, which in turn, promotes greater concentration of drug at the site of action.

The basic goal of the therapy is to achieve steady state blood level for prolonged period of time. Now a days as very few drugs are coming out of research and development and already existing drugs are suffering the problem of resistance due to their irrational use specifically in case of drugs like antibiotics. Hence, change in the operation is a suitable and optimized way to make the some drug more effective by slight alteration in the drug delivery. Sustained Release is also providing promising way to decrease the side effect of drug by preventing the fluctuation of the therapeutic concentration often the drug in the body. This article contains the basic information regarding sustained-release formulation and also the different types of the same. The advantages of administering a single dose of a drug that is released over an extended period of time, instead of numerous doses have been obvious to the pharmaceutical industry for some time.

The desire to maintain a near constant or uniform blood level of a drug often translates into better patient compliance, as well as enhanced clinical efficacy of the drug for its intended use. Introduction of matrix tablets as sustained release (SR) has given a new breakthrough for novel drug delivery system (NDDS) in the field of pharmaceutical technology.

It excludes complex production procedures such as coating and pelletization during manufacturing and drug release rate from the dosage form is controlled mainly by the type and proportion of polymer used in the preparations. Hydrophilic polymer matrix is widely used for formulating an SR dosage form. Because of increased complication and expense involved in the marketing of new drug entities, has focussed greater attention on development of sustained release drug delivery systems.

Identification of Tizanidine by U.V.:

Identification of Tizanidine by HPLC:

Ret. Time: Retention time is the time taken by peak to appear.

Height: Is the height of the peak.

Drug and polymer compatibility studies: This can be confirmed by carrying out with Infrared light absorption scanning spectroscopy (IR) studies. Infrared spectra of pure drug, polymer and physical mixture of formulations in ratio 1:1 were recorded by dispersing them in a suitable solvent (KBr) using Fourier Transform Infrared spectrophotometer. A base line correction was made using dried potassium bromide and the spectra of the pure drug, polymer and the formulation mixture were recorded on FTIR. The data are shown in Fig. 5, 6, 7, 8 and 9. 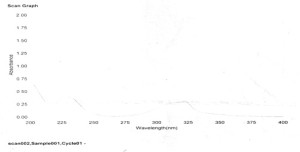 FIG. 1: IDENTIFICATION OF TIZANIDINE BY U.V. 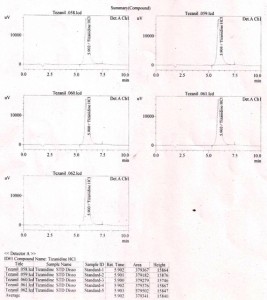 FIG. 2: IDENTIFICATION OF TIZANIDINE BY HPLC 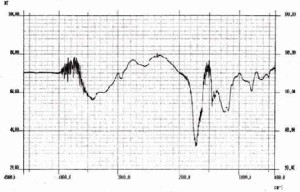 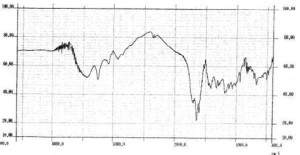 Step 1:  Weighing and sifting: Weigh all the ingredients accurately and passed through 60 # sieve.

Step 4: Granulation: Now granulate the dry mix of step 2 with binder solution with hard binding so that the granules are properly formed.

Step 6: Sifting and milling: Now after drying check the L.O.D. of the granules which should not be less than 1.65, and sift the granules through 30# sieve. And mill the oversize granules using 1.0 mm screen to get the granules of desired size.

Step 7: Blending : After sifting blend the granules with extragranular ingredients Aerosil and Talc for 10 minutes. 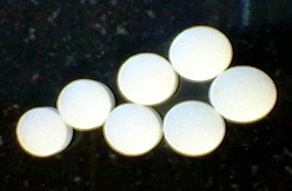 Dissolution Drug Profile: Value of zero order constant k0 trial batch 4 were found to be 11.4 and value of Regression coefficient is 0.9103. 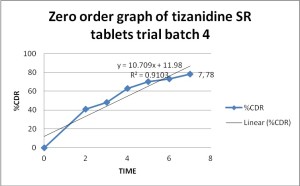 Value of first order constant k1 trial batch 4 were found to be 0.309 and value of Regression coefficient is 0.9891. 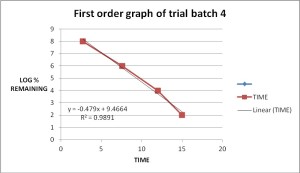 Value of Higuchi constant kh of trial batch 4 were found to be 19.5 and value of Regression coefficient is 0.9397. 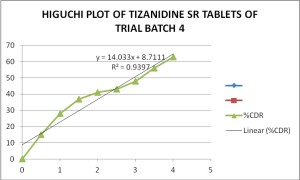 Value of n found to be 0.88 i.e. the plot follows the non fickian law.

The value of of zero order constant k0 optimized batch 5 were found to be 7 and value of Regression coefficient is 0.97. 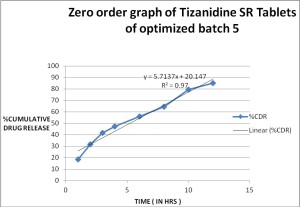 The value of first order constant k1 optimized batch were found to be 0.52 and value of Regression is 0.9926. 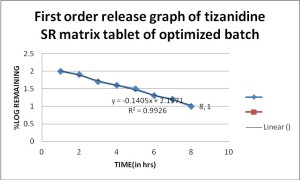 The value of Higuchi constant kh optimized batch were found to be 14.166 and value of Regression coefficient is 0.9615. 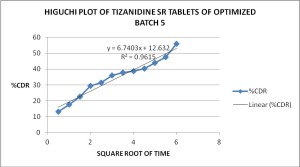 The value of n found to be 0.86 in the Koresmeyer peppas i.e. the plot follows the non-fickian law. 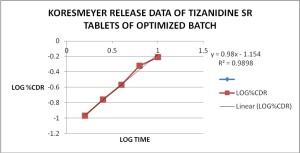 The SR tablets of Tizanidine were formulated using Hydroxy propyl methyl cellulose HPMC K100M, HPMC K4M and HPMC K100. It was observed that the therapeutic action of Tizanidine were sustained for more longer time by using two grades of HPMC  (K4M and K100 ) in the optimized batch ( Trial batch 5 ).

The main problem observed during the first three formulation were the unevenness and non-uniformity in the reading when analysed by using U.V. spectrophotometer. The next two batches were analysed using HPLC. The satisfactory result were observed with the HPLC.

So finally, the optimized were formulated by using HPMC K100 and K4M.

CONCLUSION: The action of Tizanidine and its t1/2 can be prolonged or sustained by using hydrophilic polymer HPMC to avoid fluctuation in the drug plasma level, to increase patient compliance, to reduce dosing frequency.