ABSTRACT: Oral films are a novel approach for the development of orally disintegrating dosage forms. They are thin, elegant in appearance and can be made into various sizes and shapes like rectangular or circular. The strips may be flexible or brittle, opaque or transparent. Oral films are made up of various hydrophilic and hydrophobic polymers to provide rapid disintegration on the tongue without the need for water. The aim of the present study is to develop fast dissolving films of tramadol Hydrochloride by enhancing drug dissolution in the oral cavity. The development of the films decreases the analgesic effect in less time and increases the patient’s compliance. Tramadol HCl films were prepared using Hydroxy propyl methyl cellulose-E5, Hydroxy propyl methyl cellulose-E6, Hydroxy propyl methyl cellulose-E15 and sodium alginate as polymers. Therefore the prepared films were evaluated for various parameters like physical appearance and surface texture of the film, thickness of the film, folding endurance, moisture uptake, uniformity of weight and drug content, swelling index, in vitro disintegration studies, and in vitro dissolution studies. Stability studies were also performed. Though all the formulations equally passed the evaluation parameters, it is concluded that oral thin films containing 400 mg of sodium alginate as the polymer because of better dissolution profile.

INTRODUCTION: Since the past few decades there has been a tremendous change in designing various drug delivery systems to achieve rapid onset of action 1. To overcome the limitations of oral dosage forms like tablets and capsules, oral thin films have been developed 2. These are ultra thin postal stamp sized films which are prepared using hydrophilic polymers with drug and other pharmaceutical excipients 3. This delivery system consists of a thin film, which is simply placed on the patient’s tongue or mucosal tissue and instantly gets wet by saliva to dissolve the film rapidly 4.

Most of the drug is swallowed orally with the saliva and the absorption of drug takes place in the gastro-intestinal tract. These are also known as quick disintegrating, orally disintegrating, rapidly disintegrating, mouth dissolving or melt in mouth dosage forms 5. They offer advantages such as administration without water, ease of swallowing, rapid onset of action and convenience of dosing 6. The fast dissolving films were prepared using different sweeteners and flavours to improve patient compliance 7. Tramadol hydrochloride is a centrally-acting synthetic opioid analgesic binding to specific opioid receptors. The main objective of the present study is to develop fast dissolving oral films with rapid dissolution of drug and absorption which may produce the rapid onset of action.

Solubility of Tramadol HCl: The tramadol has aqueous solubility. The solubility was determined in distilled water and phosphate buffer pH 6.8.

Melting Point Determination: The melting point of tramadol HCl was determined by capillary tube method. Fine powder of the drug was filled into a glass capillary tube which was previously sealed at one end. The capillary tube was tied to a thermometer and subjected to increasing temperatures. Therefore the temperature at which tramadol melts was recorded.

Ultraviolet Spectroscopy: The samples were subjected to UV spectrophotometric analysis and were scanned for absorption maxima (λ max) in the range of 200 - 400 nm using UV spectrophotometer in an appropriate medium. The obtained data was compared with that of reference values in literature 8.

Compatibility Studies: FTIR study was carried out to check the compatibility of drug with polymers. Infrared spectrum of tramadol HCl was determined on Fourier Transform Infrared spectrophotometer using KBr dispersion method. The baseline correlation was done using dried potassium bromide. Then the spectrum of dried mixture of drug and potassium bromide was run followed by drug with various polymers by using FTIR spectrophotometer. The range of wavelength was between 400 - 4000 cm-1. 9

Formulation of Placebo Films: Polymers of single or in combination were accurately weighed and dissolved in respective solvent and then casted in a petridish with mercury as the plain surface. The films were allowed to dry overnight at room temperature.

The solutions were cast on to 64 cm2 glass plate and dried in the oven at 45 ºC for 12 h. The film was carefully removed from surface of glass plate and cut according to required size for testing (2 cm length, 2 cm width). The samples were stored in glass container maintained at a temperature of 30ºC and relative humidity 60% ± 5% until further analysis.

Evaluation of Fast Dissolving Films: The tramadol hydrochloride films were evaluated for the following properties:

Physical Appearance and Surface Texture of the Film: This parameter was checked by doing visual inspection of films and texture of films was evaluated.

Folding Endurance: Folding endurance was determined by repeated folding of the whole film at the same place till the film breaks. The number of times the film was folded without breaking was computed as the folding endurance value.

Moisture Uptake: The moisture uptake of the films was determined by exposing them to a temperature of 40 °C and 75% relative humidity for 1 week. The uptake of moisture by the films was calculated with percent increase in weight.

Uniformity of Drug Content: This parameter was determine by dissolving one film of dimension 2 × 2 cm containing 25 mg of tramadol hydrochloride by homogenization in 100 ml of pH 6.8 phosphate buffer for 30 min with continues shaking. From this, 10 ml was diluted to 50 ml using pH 6.8 buffer solutions. The absorbance was measured at 203 nm using an UV spectrometer.

Swelling Index: The studies for swelling index of the film were conducted in pH 6.8 phosphate buffer solution. The film sample (surface area 4 cm2) was weighed and placed in a pre weighed stainless wire sieve of approximately 800 µm mesh. The mesh containing the film sample was submerged into 50ml of pH 6.8 phosphate buffer solution in a mortar. At definite time interval the stainless steel mesh was removed and excess moisture was removed carefully by wiping with absorbent tissue and reweighed. Increase in weight of the film was determined at regular time intervals until a constant weight was observed.

The degree of swelling was calculated using the formula:

Where SI is the swelling index; Wt is the weight of the film at time t; Wo is the Weight of film at t = 0.

Uniformity of Weight: The weight of the prepared films was determined using digital balance and the average weight of the all the films were calculated.

In vitro Dissolution Study: The in-vitro release of fast dissolving oral film of tramadol hydrochloride was carried out using basket type Electro lab tablet Dissolution tester USPXXIII. Film loaded with drug equivalent to 25 mg of drug was introduced into the 900ml of pH 6.8 phosphate buffer (dissolution medium)  maintained at 37 ± 0.5 °C with basket rotating at 50 rpm. Samples are withdrawn and analysed spectrophotometrically using UV-Visible spectrophotometer. The volume of dissolution medium was adjusted to 900 ml after every withdrawing the sample by replacing 5 ml with same dissolution medium.

The nature of stress testing depends upon the individual drug substance and the type of drug product involved. The stability was conducted on the drug substance packed in a container closure system that is the same as or simulates the packing proposed for storage and distribution. Stability studies for selected formulations were carried out by storing in amber colored bottle tightly plugged with cotton and capped at 40 ± 0.5 ºC and 75.0 ± 5% Rh for 3 months. The formulations were evaluated for physical appearance, drug content and in vitro dispersion time at 1 month interval time.

Ultraviolet Spectroscopy: The values of correlation coefficient for the linear regression equation was found to be 0.999 for phosphate buffer of pH 6.8 indicating a good positive correlation between concentration of tramadol hydrochloride and the corresponding absorbance values. 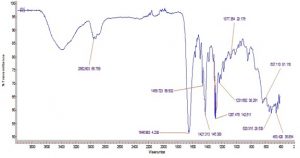 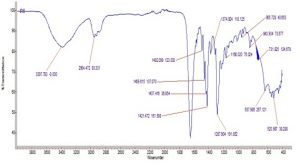 Evaluation of Fast Dissolving Films: The tramadol hydrochloride films were evaluated for the following properties:

The standard deviation values indicated that all the formulations were within the range.

Folding Endurance: The folding endurance of the films was determined by repeatedly folding a small strip of films at the same place till it breaks and values range from 112 - 208.

Moisture Uptake: All the films were free from the moisture uptake and there was no evidence of moisture attack in the prepared films.

Weight Uniformity of Films: The weights of the prepared films were determined using digital balance. The range was within 43 - 57 mg.

Uniformity of Drug Content: The drug content uniformity was performed for all the 12 formulations. The results were within the range and that indicated uniformity of mixing. Values ranges from 88 - 96%.

Reasons for fluctuations of release depend on the selection of polymer, as sodium alginate is a hydrophilic polymer while HPMC (E5, E6, and E15) are hydrophobic polymers the release mechanism differs. Sodium alginate attains water to dissolve the drug quickly and it gets dispersed, hence sudden increase of drug release was seen. But in HPMC cases being hydrophobic the matrix formed gets so rigid and drug remains intact within the polymer matrix. Hence film cannot adhere, hydrates, and dissolve quickly to release the medication for intra gastric absorption. Thus release rate retards. 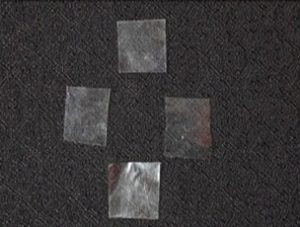 ACKNOWLEDGEMENT: The authors would like to thank for supporting us during the course of this research work.

CONFLICT OF INTEREST: There are no conflict of interest.