The present investigation was taken up to prepare and evaluate a transdermal drug delivery system (patch) of Raloxifene Hydrochloride to increase its bioavailability. The matrix type patches were prepared using different ratios of Eudragit RL100, Poly vinyl Pyrrolidone K-30, HPMC, CAP and PEG6000 in different ratios. All the prepared formulations were subjected to physical studies (weight variation, thickness, moisture content, moisture uptake, flatness, Water Vapour transmission rate, folding endurance, tensile strength, and % elongation), thumb tack test, in vitro release studies, and in vitro diffusion studies. In vitro permeation studies were performed using artificial membrane and across skin derived from albino rat. The accelerated stability studies for the formulations were performed as per the ICH guidelines. The studies showed that formulation prepared with HPMC and CAP in ratio 5:2 with adhesive polyisobutylene and Eudragit RL100 & PVP in ratio 6:4 (self sticking) were the effective systems to achieve desired results. The interaction studies carried out by comparing the results of TLC, Infrared and UV analysis of pure drug and medicated patches indicated no chemical interaction between drug and excipients.

INTRODUCTION: Raloxifene hydrochloride is a Selective estrogen receptor modulator that produces estrogen-agonistic effects on bone and lipid metabolism and hence is used in treatment and prevention of postmenopausal osteoporosis 1. Currently Raloxifene is available in tablet form only; but on oral administration it undergoes extensive first pass metabolism to hepatic glucuronide conjugates. The oral bioavailability of Raloxifene is 2.0% 2. As the drug possess characteristics (poor bioavailability, lipophilic, smaller dose etc.) suitable for the formulation of an safe and alternative transdermal route, the aim of the present study was to develop different transdermal matrix patches with varied ratios of Hydroxypropylmethylcellulose (HPMC), Cellulose acetate phthalate (CAP), Poly Ethylene Glycol 6000 (PEG) using polyisobutylene as adhesive and Eudragit RL100 and PVP (Self sticking). Transdermal delivery offers added advantages such as improved patient convenience, Non-invasive, Constant dosing rate, Capacity to terminate drug effect.

MATERIALS AND METHODS: Raloxifene hydrochloride was obtained from Panacea Biotech.All other reagents used were of analytical grade. All the experiments were carried out at Raj Kumar Goel Institute of Technology, Ghaziabad in year 2007.

Preparation of Backing Membrane: The backing membrane was prepared with an aqueous solution of 4%w/v Poly vinyl alcohol. A weighed amount of poly vinyl alcohol was added to a requisite volume of warm, distilled water and a homogenous solution was made by constant stirring and intermittent heating at 600c for few seconds. The homogenous solution was poured into glass Petri dishes already wrapped with aluminum foil around open ends and were kept for drying at 600C for 6h, forming a smooth, uniform, transparent backing membrane 3, 4.

Fabrication of Medicated patch: The different placebo patches were prepared using various combinations of hydrophilic and lipophilic polymers by trial and error method. Those polymeric combinations that exhibited smooth, flexible films were selected for preparing the drug incorporated matrix system. All the matrix systems were prepared by Solvent Evaporation technique according to the formula given in (table 1) 5, 6.

TABLE 1: FORMULATION OF DRUG MATRIX FOR THE TRANSDERMAL PATCH

Thickness: It was assessed at different points of the patch using Screw Gauge. Moisture content and uptake was found out using the procedure as described 7.

WVTR: Glass bottles of 15mL were used as transmission cells. Anhydrous Calcium Chloride was filled into each bottle and an adhesive (Araldite) was spread over the brim of the bottle. The patch was fixed onto the bottle to ensure a tight seal. The entire assembly was accurately weighed and then placed in a dessicator containing 200 ml of saturated solution potassium chloride (84% RH). The bottles were weighed every day up to 7 days, and the difference in weight was noted 8.

Drug content: Individual patch was dissolved in methanol in a 100mL volumetric flask. Flasks were put on a wrist action shaker and kept for 24 hrs. The solutions were filtered and samples were analyzed spectrophotometrically for RLH content

Flatness: Longitudinal strips were cut out from the prepared patch, one from the centre and two from either side. The length of each strip was measured, and the variation in the length due to the non uniformity in flatness was measured 7.

Tensile strength and %Elongation: were determined using an apparatus fabricated in laboratory 9.

Thumb tack test: It was performed by lightly pressing a thumb on a patch for ~5 s and then quickly removing it. By varying the pressure and time of contact, and considering the difficulty of pulling the thumb from the adhesive, it was possible to guess how easily, quickly, and strongly the adhesive formed a bond with the skin 3, 4.

In-vitro Diffusion Studies: The studies were carried out using artificial membrane i.e. Cellulose nitrate filter membrane (0.8 µm) using Franz diffusion cell. The receiver compartment was filled with Phosphate buffer, pH 7.4 (PBS) and maintained at 37±10C by a circulating water bath, stirring at 60 rpm by a Teflon coated magnetic bead on a  magnetic stirrer. Area exposed for diffusion = 0.785 cm2. Sample was withdrawn at equal intervals for 12 hr and analyzed for RLH at 285.5 nm 7.

Stability studies: The stability studies were conducted according to ICH guidelines by storing the replicates of the TDDS at 40±0.50C and 75±5% Hrs. The samples were withdrawn at 3, 6, 9 weeks and analyzed for physical appearance, drug content, in-vitro diffusion studies 5.

RESULTS & DISCUSSION: In the present study, transdermal patches bearing Raloxifene Hydrochloride were formulated using various polymer ratios and combinations of HPMC, CAP, PEG6000, Eudragit RL100, PVP, and Sodium Alginate and characterized on the basis of physical characters, in-vitro drug release, in-vitro diffusion studies, ex-vivo skin permeation and stability studies. No interaction between the drug and excipients were found on the basis of TLC, UV and IR studies. Polymeric drug-free films of various ratios and combinations of polymers were prepared and evaluated as shown in table 2. Those polymeric combinations that exhibited smooth, flexible films were selected for preparing the drug incorporated matrix system.

The Thickness and weights of the patches were found to be uniform among different batches as shown in table 3. The data obtained of % Moisture Content/ Uptake and water vapor transmission rate are shown in table 4. Moisture Content/ Uptake were found to increase with increasing concentration of hydrophilic polymers, PVP, HPMC, PEG and Sodium Alginate. The small Moisture Content in the formulations helps them to remain stable and from being a completely dried and brittle film. WVTR were higher for patches formulated with HPMC, PEG, Sodium Alginate (1.160×10-1 - 1.753×10-1  ) in comparison to films fabricated with Eudragit-PVP (0.272×10-1 - 0.608×10-1 ). Good Uniformity in drug content among the batches was observed with all formulations and ranged from 98.7% to 100%.

Table 5 shows all the results of physical parameters of patch evaluation. The results of Flatness Study showed that none of the formulations had the differences in the strip lengths before and after their cuts. It indicates 100% flatness observed in the formulated patches. The increase in amount of cellulose acetate phthalate increases the tensile strength of patch. Sodium alginate patch was found to possess least Tensile strength. The elongation at break was found to vary between 4 to 35%. The formulations using the polymers Eudragit RL100 and PVP in an 8:2, 6:4, 5:5 ratios showed optimum tackiness with the thumb and good adherence capacity with human skin. The formulations using Polyisobutylene as adhesive also showed good adhesion.

The formulations with HPMC (100%), HPMC: CAP (5:2), Eudragit: PVP (8:2, 6:4) exhibited the greatest (99.94; 98.8; 95.62; 98.6% respectively) percentage of drug release values (fig. 1). A linear relationship was observed with cumulative drug release vs. square root time (0.9835 - 0.9963). As the concentration of hydrophilic polymers increased in the formulations, the dissolution rate increased substantially. An initial rapid release was observed in matrix controlled drug delivery systems, which could be accounted for direct exposure of matrix diffusion system to diffusion media and quick release of drug at the surface. 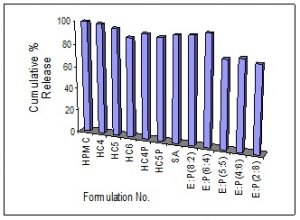 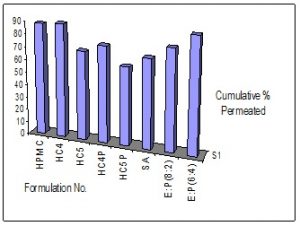 FIG. 2: COMPARATIVE STUDIES OF FORMULATIONS OF DIFFUSION ACROSS MEMBRANE

The cumulative % of drug permeated through rat skin was found maximum for formulations containing HPMC: CAP (5:2), Eudragit: PVP (6:4) with a value of 88.9%; 90.1% respectively. Flux was determined directly as the slope of the curve between the steady-state values of the amount of drug permeated (mg/cm2) vs. time in hours and permeability coefficients were deducted by dividing the flux by the initial drug load (mg/cm2).

The results are given in table 7. The release of drug from the transdermal film, when plotted against the square root of time yields a straight line, it indicates that the release pattern is obeying Higuchi’s kinetics (fig. 3). 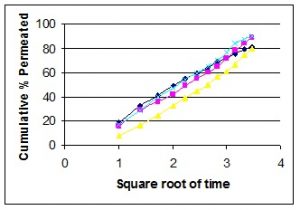 FIG 3: COMPARATIVE STUDY OF IN VITRO SKIN PERMEATION FROM FORMULATIONS SELECTED AFTER IN VITRO DIFFUSION STUDIES ACROSS MEMBRANE

In our experiments, a linear relationship was observed with cumulative drug release vs. square root time (0.992-0.998). This observation thus supports that the patches released the drug by diffusion dominated mechanism. The formulation with HPMC was physically unstable as tensile strength was decreased due to increased moisture which in turn affects the flexibility of the film as well as drug release. The formulation HPMC: CAP (5:2), Eudragit: PVP (8:2; 6:4) were found physically stable. The overall performance of TDDS after storage was tested through in vitro diffusion studies. The studies showed an increase in diffusion rate through artificial membrane and this may be due to increase in moisture content.

CONCLUSION: The studies showed that formulation prepared with HPMC and CAP in ratio 5:2 with adhesive polyisobutylene (fig. 4 & 6) and Eudragit RL100 & PVP in ratio 6:4 (self sticking) (fig. 5 & 7) were the effective systems to achieve desired results. The transdermal patches developed in the study have great utility and are a viable option for effective and controlled management of osteoporosis in post menopausal women. 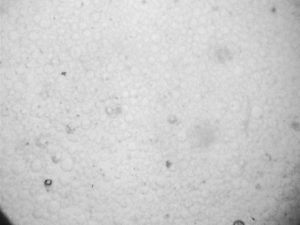 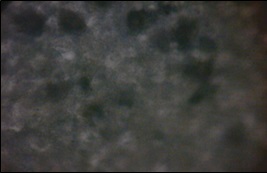 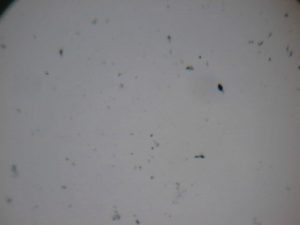 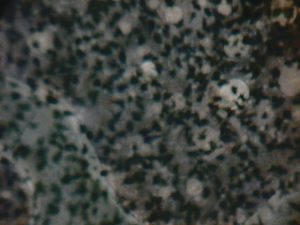 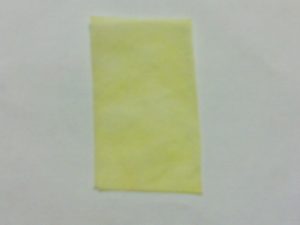 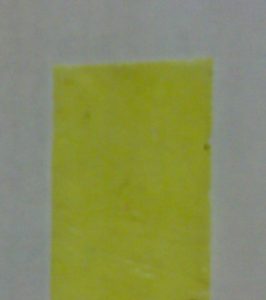