FORMULATION AND EVALUATION OF TRANSDERMAL PATCH OF PREGABALIN

FORMULATION AND EVALUATION OF TRANSDERMAL PATCH OF PREGABALIN

ABSTRACT:The objective of present study is to determine the permeation of Pregabalin from transdermal patch into microcirculation of skin. Matrix type transdermal drug delivery system (TDDS) of Pregabalin was prepared by the solvent evaporation technique. Several batches were prepared by using combination of HPMC and PVP; PVA and PVP; Eudragit RL-100 and Eudragit RS-100; HPMC and EC in different ratios. Propylene glycol was used as plasticizer and DMSO was incorporated as a permeation enhancer. Formulated transdermal patches were charachterised for their physicochemical parameters like thickness, weight variation, flatness, tensile strength, folding endurance, moisture content, moisture uptake and drug content uniformity. Patches were evaluated for their in-vitro drug release profile and ex-vivo skin permeation studies. Patches were also subjected to stability studies and skin irritation studies to determine their compatibility with skin. Formulation P1 containing HPMC and PVP in the ratio of 3:1 and propylene glycol, 5%w/v and DMSO, 6%w/v was found to be the most  optimum formulation. P1 was also found to exhibit maximum in -vitro %drug release of about 81.70%. Result of evaluation studies revealed that Pregabalin can be administered as a controlled drug delivery system to reduce frequency of drug administration. But this hypothesis requires further confirmation via in-vivo pharmacodynamic and pharmacokinetic studies in animal and human models.

INTRODUCTION:Pregabalin (PGB) is an anticonvulsant and analgesic drug 1, which is required to be administered three to four times per day for its therapeutic effect by oral route of drug delivery in the treatment of partial seizures. It also finds its use in peripheral diabetic neuropathy, fibromyalgia and post-therapeutic neuralgia.

Transdermal drug delivery has certain advantages over other systems of drug administration which in turn leads to increase patient compliance. Its non-invasive nature, ease of application and removal, predetermined rate of drug permeation, increased bioavailability of drug and decreased hepatic metabolism; all these factors make this system most suitable for systemic delivery of drug over long time periods of 24hrs.

Therefore, market of transdermal patches has made tremendous growth in recent years 2, 3.

MATERIALS: Pregabalin was obtained as gift sample from Torrent Pharmaceuticals, Ahmedabad. Polymers such as HPMC, PVP, PVA, Eudragit RL-100, Eudragit RS-100 and EC was provided by the institute and other chemicals such as propylene glycol and DMSO and methanol  used in the study were of analytical grade.

Technology Employed: Transdermal patch of Pregabalin was prepared by solvent evaporation technology. In this technology, mixture of polymer and drug solution was spread as a film on a suitable support (glass, mercury, aluminium foil etc.) and solvent was allowed to evaporate by keeping the petri dish containing solution for appropriate time period generally at room temperature. After evaporation of solvent, dried residue is the required patch containing drug trapped in the matrix of polymer 4, 5. The patch thus obtained was then evaluated for various parameters like physicochemical parameters, drug content, drug release profile and for skin irritation studies.

TABLE 2: COMPOSITION OF PLACEBO PATCH OF HPMC AND PVP IN DIFFERENT RATIOS

Fabrication of Medicated Patch of HPMC and PVP: Appropriate amount of hydroxypropylmethylcellulose and polyvinylpyrrolidone were weighed as per the ratio. These polymers were then dissolved in solvent system containing water: methanol (3:1). Drug solution containing plasticizer and penetration enhancer in appropriate concentration was added to the polymer solution. The polymer solution thus obtained was spread in petri dish previously coated with a lubricant (castor oil). This petri dish was placed in tray dryer maintained at temperature not more than 30oC for about 6hrs. After 6hrs petri dish was taken out of tray dryer and patch was removed and observed for its physical appearance and for various other parameters. Such patches were found to be uniform, smooth and flexible. Composition of medicated patches of HPMC and PVP is shown in table 3.

Evaluation of Drug Loaded Patches of HPMC and PVP

Physical Appearance: Formulated patches were evaluated for their physical appearance, uniformity, entrapment of any air bubble or precipitation of drug, which on a large part determines patient acceptability of the patch and also therapeutic efficacy 8.

Thickness: Thickness of Transdermal patch was measured by using Mitutoyo Digimatic Micrometer. Thickness of rectangular patch (2x2cms) was determined at three different points and average thickness was calculated. Same was performed for other patches also. Thickness of each individual patch should not deviate significantly from each other 8.

Weight Variation: Weight variation was studied by individually weighing 10 randomly selected patches and average weight was calculated. The individual weight should not deviate significantly from the average weight 8, 9.

Moisture Uptake: Patch was kept in a desiccator at room temperature for 24hrs. The patch was then taken out and exposed to 84% relative humidity using saturated solution of Potassium chloride in a desiccator until a constant weight is achieved. The % moisture uptake was calculated by using following formula.

Moisture Content: The prepared patches were weighed individually and kept in a desiccator containing calcium chloride at room temperature for 24hrs. The patches were weighed again after a specified interval until they show a constant weight. The percent moisture content was calculated using following formula.

Drug Content Uniformity:   Amount of drug entrapped in a patch was determined by completely dissolving a patch of size 2x2 cm2 in 100ml phosphate buffer solution (pH 7.4). Complete dissolution was achieved by placing the solution containing patch on shaker for about 24 hrs. Solution was then filtered and drug content was estimated spectrophotometrically at 210nm after suitable dilution.

The receiver compartment was maintained at room temperature and was continuously stirred with the help of magnetic stirrer. Samples were withdrawn at specific time interval and equal amount of phosphate buffer was replaced each time to maintain volume of receptor compartment at a constant level. Samples withdrawn were then analysed for their absorbance and concentration was then calculated. Table 4 below shows the in-vitro permeation profile of drug from each batch. Graph was then plotted between % drug release and time interval which compares % drug release from different batches.

TABLE 4: DETERMINATION OF PHYSICOCHEMICAL PARAMETERS AND IN-VITRO DRUG RELEASE OF EACH FORMULATION 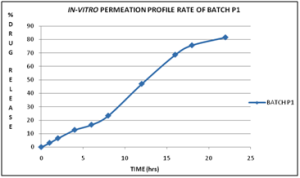 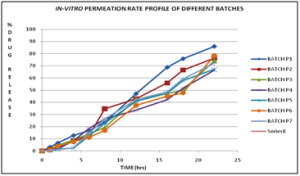 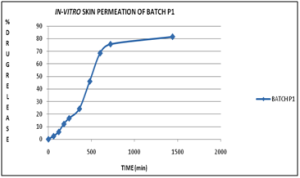 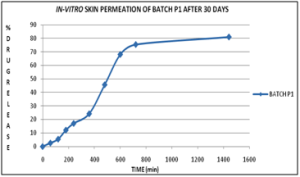 Stability Studies: Stability of a TDDS is a very important factor to be considered while formulating such system because it affects therapeutic efficacy of the system as well as patient compliance. Here, formulated patches were wrapped in aluminium foil and kept at room temperature for a period of 30 days.

After completion of 30 days, patches were analysed for their drug release profile across rat’s skin. Formulation P1 was selected for this study as this formulation seemed quite promising throughout all evaluation studies performed previously on this formulation.

Formulation was also characterised for other parameters like physical appearance and physical parameters and drug content uniformity.

Procedure adopted for evaluation of formulation after 30 days was same as used earlier that is by using Franz diffusion cell containing phosphate buffer of pH 7.4. Samples withdrawn at different time intervals were analysed by U.V spectrophotometer to determine their concentration. Table 7 shows the drug release profile data after 30 days.

Skin Irritation Studies: Skin irritation studies were carried out in order to detect irritation and sensitization under conditions of maximal stress which may occur over a prolong contact with the skin surface. For this study rat was used as an animal model. Patch (P1) (2x2 cm2) was applied to the shaved skin of the rat on one side of the back and secured using adhesive tape. On other back side of the rat, control patch (without drug) was placed in a similar manner. Animal was then kept under observation for a period of 48hrs to detect any sign of erythma, redness, sensitization or any other allergic reaction.

RESULT AND DISCUSSION: Result of physicochemical parameters and in-vitro drug release profile is shown in Table 4.  Result of in-vitro drug release across rat’s skin is shown in Table 5. Stability studies indicate that drug release rate of transdermal patch does not reveal significant variation. It was found to be 81.02% for most optimised formulation P1, after keeping it for 30 days at room temperature and humidity. Skin irritation studies show no sign of erythma or any other skin irritation reaction, so it can be concluded that neither the drug nor any polymer or excipient was found to cause adverse effects on skin, hence, patch was found to be compatible with skin. Result of all evaluation parameters was found to be satisfactory within permissible limits.

CONCLUSION: From the present work it can be concluded that Pregabalin can be administered via matrix type transdermal drug delivery system, which provides controlled release which ultimately reduces the frequency of administration of drug in patients suffering from epilepsy and fibromyalgia. Hence this non-invasive, compatible patch with ease of application and removal may find increase patient compliance but present work required to be supported by further studies involving in-vivo pharmacodynamic and pharmacokinetic studies in animal and human models.

ACKNOWLEDGEMENT: The author is thankful to Department of Pharmacy, Raj Kumar Goel Institute of Technology, Ghaziabad (U.P.), India, for providing the facility to carry out the present research work under the guidance of Dr. Meenakshi Bajpai and Ms. Monika Sachdeva, who provided their kind help, efforts and support for the completion of this work.