FORMULATION AND EVALUATION OF TRANSDERMAL PATCHES OF 18-Β-GLYCYRRHETIC ACID

FORMULATION AND EVALUATION OF TRANSDERMAL PATCHES OF 18-Β-GLYCYRRHETIC ACID

ABSTRACT: An attempt was made to formulate and evaluate the 18-β-glycyrrhetic acid (GA) transdermal drug delivery system. Preformulation studies on the drug 18-β-glycyrrhetic acid were done which included description, solubility and compatibility studies. Solvent casting technique was used to prepare the transdermal patches. Four formulations were made with 400mg of 18-β-glycyrrhetic acid and by using polymers Hydoxypropyl methylcellulose (HPMC) and Ethyl cellulose (EC) with different concentration of menthol (2%, 5%) as penetration enhancer. Interaction of drug and polymer was confirmed by FTIR studies. Transdermal patches were evaluated for the weight, thickness, percentage moisture uptake, folding endurance, water vapor transmission rate, in-vitro release and in-vivo release studies.  This was done for four formulations F1, F2, F3, and F4. The F1 formulation showed a good release profile due to increase in concentration of penetration enhancer. The accelerated short term stability study indicated that the optimized formulation F1 has very good stability at 4 o / 40 o / 60 o for a period of 3 months.

INTRODUCTION:18-β-glycyrrhetinic acid is a pentacyclic triterpenoid derivative of the beta-amyrin type obtained from the hydrolysis of glycyrrhizic acid, which was obtained from the herb liquorice. The structure of glycyrrhetinic acid is similar to that of cortisone. Both molecules are flat and similar at position 3 and 11. This might be the basis for licorice's anti-inflammatory action. It is solid off-white powder, molecular formula C30H46O4, molar mass 470.68 g mol−1, soluble in ethanol and chloroform 1. 100µM 18-ß-Glycyrrhetic Acid suppresses LPS-induced TNF-α production and NF-κβ activation in mouse macrophages 2. 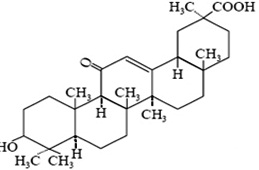 18-ß-Glycyrrhetic acid has anti-inflammatory effects in rats and mice. The acute intraperitoneal LD50 for 18-ß-Glycyrrhetinic Acid in mice was 308 mg/kg and the oral LD50 was > 610 mg/kg.

The oral LD50 in rats was reported to be 610 mg/kg. Higher LD50 values were generally reported for salts 4. The pharmacokinetics of 18-β-glycyrrhetic acid was studied in rabbits following intravenous injection at dose 20 mg.kg-1. The half-life was 2.85 h shows poor bioavailability 5.

18-ß-Glycyrrhitic acid (extract of liquorice) as anti-inflammatory agents in an amount from 0.1% to 10% by weight 6. Transdermal drug delivery system (TDDS) is a well-accepted means of delivering many drugs to the systemic circulation and currently transdermal patch devices are used to treat motion sickness, hypertension, angina, female menopause, severe pain states 7. Transdermal medication offers many advantages such as it delivers a steady infusion of a drug over an extended period of time. It can increase the therapeutic value of many drugs by avoiding specific problem associated with drug such as GIT, low absorption, decomposition due to first pass effect. The simplified medication regimen leads to improved patient compliance and reduce inter and intrapatient variability 8.

Transdermal patches deliver drugs at a constant rate for 24 hours or longer. Norplant system releases progestin levonorgestel from silicon rubber tubular capsules for several years. The promise of zero order release is to maintain a constant drug concentration in blood for an extended period of time. The zero order release of a drug, however, does not necessarily result in a constant drug concentration in blood. The absorption of the drug by the body usually does not follow the zero order kinetics, except when the drug is directly delivered into the blood stream by an infusion pump 9.

The objective of the present study was to design and evaluate transdermal polymeric matrix films of HPMC and EC containing 18-ß-Glycyrrhitic acid to avoid the hepatic first pass metabolism and improve the therapeutic efficacy of the drug.

All other chemicals and solvents used were of analytical grade.

Methods: It is one of the important prerequisite in development of any drug delivery system. Preformulation studies were performed on the drug, which included solubility and compatibility studies. 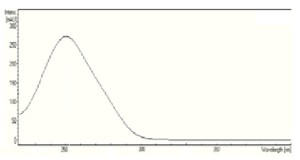 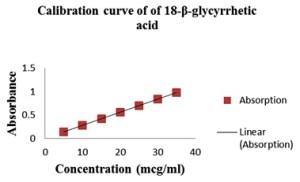 Preparation of Transdermal patches:The solvent casting technique was used to formulate the 18-β-glycyrrhetic acid transdermal patch. The adhesive patch prepared by dissolving polymer and drug in ethanol: water (10:1). To this menthol (2%, 5% w/w of the polymer) as permeability enhancer, glycerine (30% w/w of the polymer) as plasticizer were added and mixed well.  The polymeric dispersion was poured into a petridish (9 cm2 diameter). To control the rate of evaporation of solvent, the mould was covered with a funnel of suitable size and the casting solvent was allowed to evaporate to obtain the dried films .The films were cut into small patches (4 cm2) and stored between sheets of wax paper in desiccators for further evaluations.

The anti-inflammatory activity of formulated patches will be evaluated by the carrageenan-induced rat hind paw edema method of Winter et al. One day before the experiment, the left hind thigh of each animal was shaved without damaging the skin. The patch samples were applied to the shaved area in the left hind thigh.

The Group I (control) received orally 0.5ml of normal saline solution. The Group II (standard) received Marketed formulation Brugel. The Group III and IV received F1 and F3 formulation respectively. One hour before patch application 0.1 ml of 1% Carrageenan in isotonic saline was injected subplantarly into left hind paw. The volume of the left hind paw was measured using a displacement of plethysmometer 12, 13.

Stability study: The stability study was conducted according to ICH guidelines by storing the prepared patch (F1) at 4oC, 40oC and 60oC kept in refrigerator, stability chamber and incubator for period of three months. The sample was withdrawn at 15, 30, 45, 60, 75, 90th day and analyzed for physical appearance, drug content, in-vitro diffusion studies 14.

Preformulation studies: It showed white colored crystals 18-β-glycyrrhetic acid was poorly soluble in water, buffer solution pH 7.4 while soluble in ethanol, chloroform, DMSO.Interaction of drug with polymers was confirmed by carrying out IR interactions studies. It shows that there are no interactions found between the drug and polymers.

The values of folding endurance were found to vary from 262±0.4to 288±0.4which indicates good strength and elasticity The Percentage drug content of formulated films was found to be in the range of 98.24±0.09 to 98.24±0.09per 4 cm2 strip. However, there was increased moisture content with an increase in hydrophilic polymers.

The film F1 showed maximum WVTR, %MU, and %MC, which may be attributed to the hydrophilic nature of HPMC and EC decreased these values. The results indicated that the hydrophilicity of the polymers is directly proportional to the WVTR, %MU, and %MC. The order of hydrophilicity of the polymers was HPMC >EC. However, the small moisture in the formulations may prevent complete drying and brittleness. Overall, the moisture uptake of the transdermal films was low and thus reduced the bulkiness of the films. % drug content was observed for all the formulations which were 99.01± 0.06 % to 99.17 ± 0.06mg. The results indicated that the film preparation was capable of yielding uniform drug content due to the homogenous dispersion of the drug.

In vitro drug release studies: The release of a drug from a transdermal drug delivery system occurs by diffusion, which involves transport of a drug from the polymer matrix in to the in vitro study medium depending on concentration. The EC was use it retards the release of the drug from the matrix due to the more hydrophobic nature, therefore the prolonged drug release was obtained. The formulation F1 and F2 containing HPMC showed 95.35% & 84.90 % drug release over 10 hrs due to hydrophilic nature of the polymer. Whereas the formulation F3 and F4 containing EC Showed 90.05 % & 81.23 % drug release in 10 hrs due to hydrophobic nature of the polymer, as shown in figure 3 and Table 3. 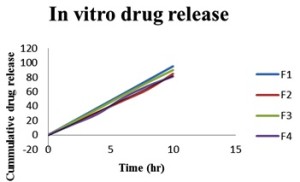 TABLE 3: ANTI-INFLAMMATORY EFFECT IN TERMS OF PERCENT INHIBITION OF EDEMA

CONCLUSIONS: Based on the results of this study, it can be concluded that a well-controlled release and effective skin permeation of the drug was achieved by the film F1 (HPMC) with 5% menthol as permeability enhancer for extended periods of time. The in vivo study has proved the feasibility of controlled transdermal delivery of 18-β-glycyrrhetic acidin adequate quantity into the circulation. However, to establish the therapeutic efficacy of this formulation, pharmacokinetic studies in humans needs to be conducted.