ABSTRACT: The aim of the present investigation was to formulate and evaluate phytoformulation prepared from the ethanolic extract of Vernonia elaeagnifolia. Vernonia elaeagnifolia whole plant was collected and extracted with ethanol by soxhlation. Dried ethanolic extract of Vernonia elaeagnifolia was used to formulate the nanosuspension by homogenization method to enhance the bioavailability of phytoconstituents by increasing its solubility. Nano suspension of Vernonia elaeagnifolia (NS-VE, 50 mg/kg, 100 mg/kg) was evaluated for particle size, polydispersed index (PDI), entrapment efficiency, zeta potential, Fourier transform infrared spectroscopy (FTIR), differential scanning calorimetry (DSC).NS-VE was screened for antihyperlipidemic activity with propylthiouracil induced and triton X-100 induced hyperlipidemia models in rats. The average particle size of NS-VE was found to be 0.027µm, PDI 60% (0.026 µm), 5mV zeta potential, and 46% entrapment efficiency. NS-VE (at doses 50 mg/kg, 100mg/kg bd.wt p.o) showed significant (p<0.01) anti-hyperlipidemic effect by reducing levels of TG, TC, LDL, VLDL and shown raised level in HDL when results were compared with normal control, disease control, and standard group. Nanosuspension of Vernonia elaeagnifolia can be used for the management of hyperlipidemia and other metabolic disorders with improved bioavailability.

INTRODUCTION: Dyslipidemia is a major cause of atherogenesis and related conditions like coronary heart disease (CHD), ischemic cerebro-vascular disease, and peripheral vascular disease. Dyslipidemia is a condition of elevation in plasma lipids, includes triglycerides (TG), cholesterol, phospholipids along with plasma lipoproteins (VLDL, HDL, and LDL) 1. Variety of cardio-vascular diseases is one of the major deadly cause of fatality and mortality among the global population, which contribute to nearly one-fourth of the deaths in the age group of 25-65 years 2.

Based on the Indian Council of Medical Research (ICMR) survey, there is a high dominance of hypercholesterolemia in the civic area as compared to rural area 3. High lipid levels may result due to enhanced absorption of lipids throughout the gut or improved endogenic synthesis of lipids. Dyslipidemia can be induced by diet management, i.e., high fat diet and with triton X-100 induced hyperlipidemia model 4-9. Dyslipidemia can be controlled with triton X-100, without change/ manipulation in diet, but by blocking the endogenic synthesis of lipid levels or by decreasing fat absorption from guts.  Both these elements can be evaluated in normal animals 10.

Nanosuspension is a technological tool applied mainly to unravel the problem of poor solubility and bioavailability of phytoconstituents and occasionally to improve drug safety and efficacy by altering their pharmacokinetics. It is used as an alternative approach to lipid systems when the phytoconstituents/drug is insoluble in aqueous and organic media. The reduced particle size of poorly water-soluble drug to nano range enormously increases surface area leading to an increased rate of dissolution or an increase in saturation solubility due to an increased dissolution pressure 11.

In the present study, nanosuspension of Vernonia elaeagnifolia ethanol extract was formulated, characterized, and screened for its anti-hyperlipidaemic action.

Entrapment Efficiency: The entrapment efficiency of NS-VE was determined by sonicating NS-VE at 20,000 rpm for 20 min. Aliquots of above solutions (0.1 mL, 0.2 mL, 0.3 mL, 0.4 mL and 0.5mL) were taken and diluted up to 10 mL. Resultant concentrations were centrifuged at 1500 RPM for 20 min. The aliquot of the supernatant was measured by UV/visible spectrophotometry at 246 nm14. Entrapment efficiency (%) was calculated using this formula:

Differential Scanning Calorimetry (DSC): 16 DSC is a productive technique used for the evaluation of the thermal properties of NS-VE. NS-VE was subjected to heating rate of 10°C/min from 25 °C to 300 °C; the heat absorbed or evolved was recorded as exotherm or endotherm. DSC analysis was done in the Central Analytical facility-University College of Technology, Osmania University, Hyderabad, Telangana, India.

Animals: Wistar rats weighing about 170-200 g were procured from Jeeva Life sciences, Uppal, Hyderabad for present experimental study. The data protocol was approved by the IAEC (Institutional Animal Ethical Committee Reg. No. 1175/PO/Re/S/08/CPCSEA) of CPCSEA (Committee for control and supervision of experimentation on animals).

Group-II to Group-V animals were treated PTU (10 mg/kg bd. wt) for 8 days and on 8th day treated with cholesterol (400 mg/kg b. wt). 6 h post-treatment, blood was withdrawn by retro-orbital plexus, and lipid levels were estimated 18.

RESULTS: The present research work was aimed to formulate phytoformulation of Vernonia elaeagnifolia for the assessment of anti-hyperlipidaemic activity. Vernonia elaeagnifolia was extracted by soxhlation with ethanol, and the ethanolic extract was used in the formulation. Nanosuspensions of Vernonia elaeagnifolia were prepared by the homogenization method to increase biological activity as secondary metabolites are associated with slow and insufficient absorption with inconsistent bioavailability. Formulated nano-suspension (NS-VE) was characterized for its particle size, particle size distribution, zeta potential, and morphological features with SEM. Their SEM images revealed the particle size of suspension within the accepted range of nano-particles. The average particle size, PDI, and zeta potential for NS-VE nanoformulation were found to be 0.027 nm, 0.046, and + 5Mv, respectively Fig. 1. 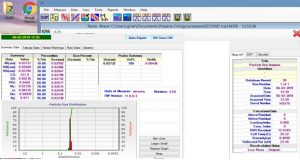 The polydispersity index values represent the average uniformity of a particle solution. Large PDI values ranged 0.027 ± 0.04 (60%) represent particle size distribution as well as the stability of the nano-particles. Zeta potential shows the charge on the particle surface, which indicates the physical stability of dispersed systems. Zeta potential of NS-VE was 5mV indicating that the nanoparticles have a little cat-ionic charge due to the presence of chitosan Fig. 2. 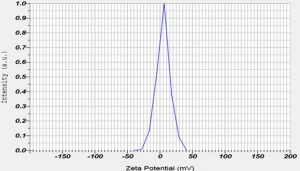 Nanonisation of herbal extracts can lead to an increase in dissolution velocity, wetting, particle surface area, and saturation solubility. This may, in turn, bring about more bioavailability due to enhanced in-vivo release as only solubilized particles can be absorbed through lipophilic cellular membranes 20. These nanostructure systems might be able to potentiate the required action of herbal extracts, reducing the necessary dosage, side effects, and improved biological activity.

Scanning electron microscopy was performed for NS-VE. Scanning electron images for surface morphology of NS-VE nanosuspension revealed their smooth texture, spherical shape and smooth topology Fig. 3. DSC is a productive technique used for evaluating the thermal properties of NS-VE formulation. The thermogram of NS-VE and V. elaeagnifolia Fig. 4 and Fig. 5 exhibited endotherm at 100.75 °C and 169.41 °C. This thermogram also showed a broad endotherm between 48.6 °C-108.8 °C and 160 °C - 168 °C corresponding to the melting endotherm of NS-VE and V. elaeagnifolia extract. This is maybe due to the conversion of secondary metabolites from crystalline to amorphous form.

The percentage of drug entrapment efficiency was calculated for NS-VE with chitosan polymers and was found to be 46%. 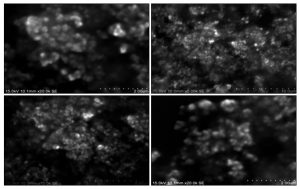 The prominent peaks representing NS-VE and V. elaeagnifolia extracted appear in the spectra of NS-VE nanosuspension and did not show any significant shifting in the position of the absorption peak Fig. 6. 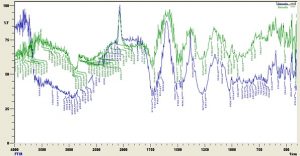 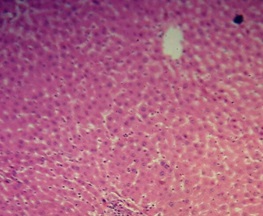 DISCUSSION: This study deals with the effect of NSVE extract (50 & 100 mg/kg bd.wt) on plasma and hepatic lipid profile in hyperlipidemic rats. There was a significant reduction in plasma, and hepatic lipid profiles along with elevation in plasma HDL in NS-VE treated rats as compared to hyperlipidemic rats, thus indicating the efficacy of Vernonia elaeagnifloia extract in preventing the elevation seen in various components of lipid profile under experimentally induced hyper-lipidemia. Epidemiological studies have shown that a higher level of HDL in plasma reduces the risk of coronary artery disease. Flavonoids are reported to increase HDL concentration and decrease LDL and VLDL levels in hypercholesteremic rats 21-23. Flavonoids found in Vernonia elaeagnifloia extract could, therefore, be considered favorable in increasing HDL and decreasing LDL and VLDL in Hyperlipidemic and NS-VE treated rats.