ABSTRACT: The objective of the study is to design gastro retentive drug delivery systems for Amoxycillin trihydrate. It was prepared with the objective to obtain site-specific drug delivery for the stomach and to extend its duration of action. The sustained release of amoxicillin is desired because of its short biological half-life. The preparation was carried out by using guar gum as a carrier in the form of a three-layer matrix tablet. Amoxycillin trihydrate was chosen as a model drug because of its site-specificity. Matrix tablets containing either 30 % (M) of guar gum were prepared by wet granulation technique using starch paste as a binder. Three-layer matrix tablets of Amoxycillin were prepared by compressing on both sides of guar gum matrix tablet granules of Amoxycillin M with either 50 (TLM) of guar gum granules as release retardant layers. Both the matrix and three-layer matrix tablets were evaluated for weight variation, hardness, friability, buoyancy and in-vitro dissolution studies. Optimized formulation of amoxicillin was found to have increased gastric residence prolonging the release of drug with 74% (matrix tablet) and 81% (three layer matrix tablet) of drug release in 8 hours by diffusion. The mechanism of drug release was found to be diffusion and followed combination of zero order and first order kinetics. Hence gastro retentive drug delivery system of Amoxycillin trihydrate is a promising approach as it can lead to decrease in the frequency of administration and ultimately lead to better patient compliance.

INTRODUCTION: Amoxicillin is a semi-synthetic, orally absorbed, broad spectrum antibiotic. It is widely used in a standard eradication treatment of gastric H. pylori infection combined with a second antibiotic and an acid-suppressing agent 1.

As conventional drug delivery systems do not remain in the stomach for prolonged periods, they are unable to deliver the amoxicillin to the site of infection in effective concentrations. Therefore, it is necessary to design drug delivery systems that not only all aviate the short comings of conventional delivery vehicles but also deliver amoxicillin to the infected cell lines. Some researchers had prepared and reported new amoxicillin formulations, such as floating tablets2, 3 mucoadhesive tablets3, 5 and mucoadhesive microspheres3, 5, which were able to reside in stomach for an extended period for more effective H. pylori eradication. Amongst the described formulations, the floating tablet is preferred for better and less variable gastric retention, but it has a limitation of incorporation of high dose of the drug. The drug with high dose like amoxicillin can be easily incorporated in liquid in-situ gelling formulation that upon oral administration can float for a prolonged period of time in the stomach 5. However, the use of tablet has hardly been reported, so it is interesting to study the release pattern of amoxicillin in the tablet formulations. The purpose of this work was to prepare new sustained release tablets of amoxicillin by using guar gum as a rate-controlling polymer.

Preparation of Amoxycillin Matrix Tablets 6:Matrix tablets of Amoxycillin were prepared by wet granulation method. A mixture of talc and magnesium stearate (2:1 ratio) was used as lubricant and HPMC was used as diluents. Guar gum was included in the formulation in various proportions.

Three matrix formulations were prepared with 30 % of guar gum and were coded as M. The composition of formulations used in the study containing 200 mg of Amoxycillin in each case is shown in Table 1. In all the formulations, guar gum was sieved (< 250µm) separately and mixed with Amoxycillin (< 150µm) and HPMC (< 250µm).

The lubricated granules were compressed at a compression force of 4500–5500 kg using 10 mm round, flat and plain punches on a single station tableting machine. Matrix tablets of each composition were tested for their drug content and release characteristics with a suitable number of tablets for each test.

The hardness of the matrix tablets was determined by using Monsanto Hardness Tester.

Three-layer matrix tablets (TLM) containing 50 mg of guar gum granules as release controlling layer on both sides of 30 % matrix granules was prepared as follows. Granules of the matrix formulation containing 30 % of guar gum (M) were prepared as described above.

Guar gum granules containing 87 % of guar gum for layering were prepared by wet granulation method using 10 % w/w of starch as paste. The guar gum and starch paste was mixed well and the resulting wet mass was passed through a mesh (1680 µm) and the granules were dried at 50°C for 2 h in a tray drier.

The dried granules were passed through a mesh (1190 µm) and these granules were lubricated with a mixture of talc and magnesium stearate (2:1) using a cone blender. The composition of guar gum granules used in the study for layering in three-layer matrix tablets is given in Table 3.4. Initially the volume of the die cavity (10 mm round, flat and plain) was adjusted equivalent to the weight of three-layer matrix tablets (550 mg).

Then preweighed amount of guar gum granules equivalent to bottom layer (50 mg) was taken and placed in die cavity and slightly compressed for uniform spreading. The upper punch was lifted up, and granules of the matrix formulation (M) were placed over the bottom layer of guar gum granules in the die cavity and again slightly compressed for uniform spreading.

The remaining volume of the die cavity was filled with the preweighed amount of guar gum granules equivalent to top layer (50 mg) and compressed with a maximum force of compression on single station tableting machine to obtain three-layer matrix tablets. Thus, the top and bottom layers of the three-layer matrix tablet consisted of release retardant guar gum and the middle layer consisted of guar gum matrix layer along with Amoxycillin.

Evaluation of Granules: Evaluation was performed to assess the physicochemical properties and release characteristics of the developed formulations.

Bulk Density (Db) 7: It is the ratio of total mass of powder to the bulk volume of powder. It was measured by pouring the weighed powder (passed through standard sieve # 20) into a measuring cylinder and the initial volume was noted. This initial volume is called the bulk volume. From this, the bulk density was calculated according to the formula mentioned below. It is expressed in g/cc and is given by:

Flow Properties (Angle of Repose (θ)) 7:This is the maximum angle possible between the surface of a pile of powder or granules and the horizontal plane. The angle of repose of granules was determined by funnel method. The funnel was fixed at a particular height (2.5 cm) on a burette stand.

The powder sample was passed through the funnel until it forms a heap. Further adding of granules was stopped as soon as the heap touches the tip of the funnel. A circle was drawn across it without disturbing the pile. The radius and height of the heap was noted down. The same procedure was repeated for three times and the average value was taken. The angle of repose was calculated by using equation.

Hausner’s Ratio 7:It is measurement of frictional resistance of the drug. The Ideal range should be 1.2 – 1.5, it was determined by the ratio of tapped density and bulk density.

Uniformity of Weight (Weight Variation Test) 9:This is an important in-process quality control test to be checked frequently (every half an hour). Corrections were made during the compression of tablets. Any variation in the weight of tablet (for any reason) leads to either under medication or overdose. So, every tablet in each batch should have a uniform weight. 20 tablets were weighed individually. Average weight was calculated from the total weight of all tablets. The individual weights were compared with the average weight. The percentage difference in the weight variation should be within the permissible limits (± 3%). The percent deviation was calculated using the following formula:

In-vitro Dissolution Study: Measurement of in-vitro drug release was carried by using USP Dissolution apparatus-II. Dilution method was used to maintain the different pH conditions in the dissolution studies. 5 ml of the solution was added into the 900ml of buffer solution of pH 1.2which added into the dissolution flask and maintained the temperature at 37.5°C with 50 rpm. At different interval withdrawn the 5 ml aliquots and equal amount of fresh buffer medium was added into it after each sampling. This process continues for 8 hr and after completion of process the collected sample was analyzed through UV spectrophotometer at 272 nm 7.

Curve fitting analysis: The mechanism of Amoxycillin released from the matrix system was studied by fitting the dissolution data obtained to following equations 7.

All the granules are well within the specification limit. Hausner‘s ratio for layer 3 was found to be between 1.115 – 1.211. With this the granules were found to be free flowing material and showed suitability to be compressed as tablets of expected weight. Table 4 shows the granular properties of selected formulation i.e. matrix tablet (single layer).

TABLE 5: DIMENSIONS OF THE TABLET:

Hardness: The hardness of the tablets was determined using Monsanto hardness tester. It is expressed in kg/cm2 (table 6).

Friability Test: The friability of tablets was determined by using Roche friabilator. It is expressed in percentage (%) (table 7).

The % friability was less than 1% in all the formulations ensuring that the tablets were mechanically stable.

Uniformity of Weight (Weight Variation Test): Average weight was calculated from the total weight of all tablets. The individual weights were compared with the average weight (table 8).

The percentage of both single and three layer matrix tablet found to be in under the permissible limits (± 3%) (table 9).

The drug content of matrix tablets varied from 74.53 to 82.76 %and for three layer matrix tablet 81.20 to 92.35 % shows the post compressional properties of selected formulation. The buoyancy of the formulation was found to be more than 20 hours with good matrix integrity.

In-vitro Dissolution Study: In-vitro release studies were carried out using USP type II (paddle) dissolution test apparatus. 900ml of 0.1N HCl was filled in dissolution vessel and the temperature of the medium were set at 37oC ± 0.5oCand rotational speed of 50 rpm 5ml of sample was withdrawn at predetermined time intervals for 6 hours and same volume of fresh medium was replaced. The samples were analyzed for drug content against 0.1N HCl as a blank at max 272 nm using U.V. spectrophotometer. The dissolution profiles for the nine formulations are shown in the below table 10 and 11. 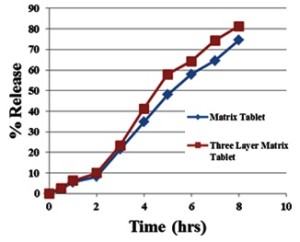 In-vitro release studies were carried out in simulated gastric fluid. Release was observed after a lag period of 15 minutes after which steady and constant release of the drug was observed for a period of 8 h leaving behind the buoyant mass of tablet matrix.

CONCLUSION: From the study, it can be concluded that gastroretentive drug delivery system of Amoxycillin could be successfully prepare dosing guar gum as a polymer. The tablet formulations of amoxicillin may be an advantageous alternative for oral sustained release formulations and can be helpful for the treatment of peptic ulcer.

ACKNOWLEDGEMENT: The authors are thankful to librarians of various Institutions & libraries like NISCAIR New Delhi, and to the R. V. Northland Institute, Dadri, Gautam Buddha Nagar for providing literature survey facility to carry out the work.