ABSTRACT: Lansoprazole a proton pump inhibitor used in the short term treatment of gastric and duodenal ulcer, reflux esophagitis, structuring and erosive esophagitis. In the present investigation an attempt has been made to enhance the solubility and dissolution rate of lansprozole by formulating it as solid dispersions with KollidonVA64, Soluplus and poly ethylene glycol 6000 by solvent evaporation method. The solid dispersions were further compressed as tablets by using superdisintegrants such as croscarmellose sodium (CCS) & crospovidone (CP). Rapid release of lansoprazole from solid dispersions was observed which was influenced by the proportion of carrier concentration. Among the solid dispersions prepared the dispersion formulated using Soluplus showed rapid drug release than kollidon & PEG 6000 containing Solid dispersions and pure drug alone. The release was found to follow the first order kinetics. Solid dispersions prepared by the solvent evaporation method were further formulated into tablets with superdisintegrants such as croscarmellose sodium, crospovidone. The dissolution rate of such tablet formulations were found to release the drug at a faster rate than the tablets prepared with plain drug.

INTRODUCTION: Now a day’s, there has been an enhanced demand for more patient-friendly and compliant dosage forms. As a result, the demand for developing new technologies has been increasing annually. For most therapeutic agents used to produce systemic effects, the oral route still represents the preferred way of administration, owing to its several advantages and high patient compliance compared to many other routes. Drug dissolution and absorption as well as onset of clinical effect and drug bioavailability may be significantly greater than those observed from conventional dosage forms 1.

For the last few decades, researchers have been developing intraoral delivery systems (IDS) that can produce desirable drug exposure for optimum therapeutic effect. As a result, as evident from the abundance of scientific and patent literature over the last twenty years, nontraditional oral dosage forms (e.g., buccal, sublingual, etc.) have been or are being developed with emphasis on pre gastric absorption by the various tissues of the oral cavity with the intention to avoid first-pass and gut-wall metabolism, to enhance bioavailability, or improve convenience of dosing. The target sites for local drug delivery in the oral cavity include the following: buccal, sublingual, periodontal, periodontal pocket, peribuccal, perilingual, tongue (i.e., lingual), and gum (i.e., gingival) 2.

ODTs are being named as orodispersible, rapid-dissolving, mouth-dissolving, rapid-disintegrating tablets. There are some definitions that made by pharmacopeias and agency as follows:

Orodispersible tablets have been placed in the mouth where they disperse fast before being swallowed and they are uncoated tablets. Orodispersible tablets disintegrate within 180 seconds when the disintegration tests have been conducted up to the test for disintegration of tablets 3, 4. Orally disintegrating tablets are intended to disintegrate fast in the mouth to provide dispersion before being swallowed where the active ingredient is intended for gastrointestinal delivery and/or absorption 5, 6. Lansoprazole is a proton pump inhibitor (PPI) which inactivates the final step in the gastric acid secretion pathway in gastric parietal cells in a dose-dependent manner. Bioavailability is 85% after the first dose – the highest among PPIs and acid inhibition is swift, resulting in rapid relief of symptoms. Lansoprazole also exhibits antibacterial activity against Helicobacter pylori in vitro 9, 10. Seventeen years of clinical experience worldwide have shown lansoprazole to be an effective and well-tolerated treatment option in the management of acid-related disorders, including gastric and duodenal ulcers and gastroesophageal reflux disease, and the treatment or prevention of gastroduodenal lesions induced by NSAIDs 11. Lansoprazole is also effective in combination with different regimens for H. pylori eradication and is included in the first-line PPI-based options for this purpose. Lansoprazole comes under the BCS II classification drug which has poor aqueous solubility & bioavailability.

Preparation of Solid Dispersions: Solid dispersions were prepared by using PEG 6000, Soluplus and KollidonVA64 as a polymers by solvent evaporation method.

Solvent Evaporation Method: In this method Specified quantity of Lansoprazole and PEG 6000, KollidonVA64 & Soluplus were taken in a china dish and to that few ml of methanol was added and slightly heated until both drug and polymer dissolves. Then it is subsequently allowed to evaporate. The obtained mixture was dried, passed through the sieve no. 80, packed in a wide mouthed amber colored glass container and was hermetically sealed and stored 10. Various compositions of solid dispersions are given in Table 2.

Estimation of Lansoprazole in solid dispersions: Solid dispersions of Lansoprazole from a batch were taken at random and were transferred into a 100 ml volumetric flask and 70 ml of methanol was added to it. It was shaken occasionally for about 15 mins and the volume was made up to 100 ml by adding 6.8 pH phosphate buffer. About 10 ml of the solution from the volumetric flask was taken and centrifuged. The supernatant solution from the centrifuge tube was collected and again filtered by using Whatmann filter.

Then the filtrate was subsequently diluted with 6.8 pH phosphate buffer and the absorbance was measured at 284 nm.

Preparation of Lansoprazole orodispersible tablets from solid dispersions: Among the solid dispersions prepared and based on the dissolution studies performed, one optimized dispersion was selected for the preparation of tablets. The selected solid dispersion was blended with super disintegrants such as CCS and CP magnesium stearate and talc as lubricant and glidant. The powder blend was directly compressed into tablets by using lostatin mini press (ELITE). The compositions of various tablet formulation were given in the Table 4.

RESULTS AND DISCUSSION: Saturated solubility studies revealed that Lansoprazole show maximum solubility in 6.8 pH Phosphate buffer medium than the other dissolution medium used. The drug concentration was measured at an absorption maximum of 284 nm using ultraviolet spectrophotometer (ELICO SL120) for all dissolution medium. The absorbance values and their corresponding solubilities were shown in Table 1.

The compositions of various tablets prepared were shown in Table 4. All the solid dispersions were compressed under identical conditions to avoid processing variables. The physical parameters such as weight uniformity, hardness, friability, drug content, were evaluated for all the tablets prepared. The physical parameters evaluated were highly uniformed and all tablets were found to be within the I.P. specified limits. The weight uniformity values were in the range of 198± 3.0 to 200 ± 10 mg, hardness was found to be 3.5 ± 0.4 kg/cm2, friability values were in the range 0.1-0.8% and drug content values were in the range of 29.98 ± 0.2 mg/tablet for the Lansoprazole orodispersible tablet formulations. The dissolution studies on Lansoprazole marketed tablet and all the tablet formulations were performed by using 6.8 PH Phosphate buffer using paddle method.

TABLE 2: COMPOSITIONS OF VARIOUS OF SOLID DISPERSION OF LANSPORAZOLE 1:1 AND 1:2 RATIO 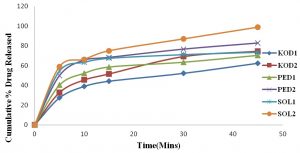 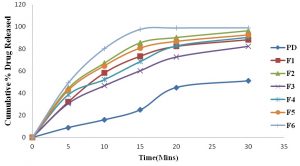 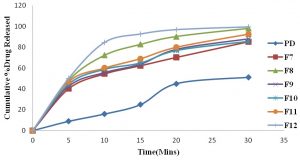 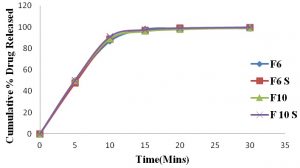 FIG. 8: DISSOLUTION PROFILES OF OPTIMIZED LANSOPRAZOLE FORMULATIONS BEFORE AND AFTER STABILITY STUDIES

CONCLUSION: The present study has shown that it is possible to increase the dissolution rate of poorly soluble drug Lansoprazole by preparing it as solid dispersions with carriers like PEG 6000, KollidonVA64 & Soluplus. Among the various methods employed for the preparation of solid dispersions. Dispersions prepared by solvent evaporation method with soluplus in the ratio of 1:2 for drug and carrier to exhibit rapid dissolution rate when compared with pure drug. Orodispersible tablets of Lansoprazole prepared using various superdisintegrants also shows the rapid dissolution and drug release when compared with marketed tablets. Based on the study, it may be concluded that Lansoprazole tablets prepared by using solid dispersions with Soluplus & croscarmellose sodium as superdisintegrant was found to be ideal for rapid dispersion and for improving dissolution rate, which in turn increases the bioavailability.