ABSTRACT: Objective: Conventionally, sustained release pellets have been prepared in the form of reservoir systems by coating non-pareil pellets which is an expensive and tedious process. The aim of present study was to develop sustained release matrix (SRM) pellets of Nateglinide (NT), an oral antidiabetic agent, commonly used in the treatment of Type 2 Diabetes mellitus. Methods: The SRM pellet formulations of NT were prepared with different polymers like HPMC K4, HPMC K15, Kollidon® SR (K-SR), Hydrogenated castor oil (K-HCO) by extrusion spheronization process. The SRM pellet formulations were characterized for micromeritics properties, aspect ratio, sphericity, friability, Kawakita analysis, Fourier transform infrared spectroscopy (FTIR), drug content and In vitro drug release studies. Results: The optimized formulation of SRM pellets (Batch F7) prepared by using K-SR (35%w/w) and K-HCO (15 %w/w) has shown desired sphericity and excellent micromeritics properties. The friability and drug content value were found in the range of 0.22- 0.81% and 96.8-99.7% respectively for all formulations. FTIR spectroscopy studies have not revealed any chemical interaction between the NT and excipients. The Kawakita plot of F7 showed good flow ability with ‘a’ value 0.4537 and ‘b’ value 0.0029. The sustained release profile showed 53.63% drug release at 6 hrs and 100% drug release within 12 hrs and Higuchi kinetic model was followed by drug release. Conclusion: Thus, Nateglinide sustained release matrix pellets can be explored for commercial manufacturing instead of conventional reservoir pellets

INTRODUCTION: The multiparticulate dosage form has caught the attention of formulation scientists due to their tremendous potential as a multidimensional drug delivery system. The risk of dose dumping, intra- and inter-subject variability in gastric emptying times can be reduced if the drug is formulated into multiparticulate systems instead of reservoir/monolithic tablets 1-4.

Conventionally, sustained release multiparticulates have been prepared in the form of reservoir and matrix systems. In the reservoir type, drug solution or dispersion is sprayed on non-pareil pellets, followed by functional polymer coating 5-6. The entire coating process of reservoir pellets is expensive, tedious and time consuming. The manufacturing of matrix systems is relatively simple in which drug is uniformly dispersed into release controlling carrier to provide desired drug release kinetics. In addition, variations in the drug loading is adequately reduced in matrix pellets in contrary to the reservoir pellets systems 7-8.

Nateglinide is an insulin tropic agent belonging to family Meglitinide with structural name (–)-N-[(trans-4-isopropylcyclohexane) carbonyl] – D -phenylalanine. It reduces the blood sugar by stimulating insulin secretion via ATP-dependent K+ channel on pancreatic beta-cells. The pharmacokinetics of NT is characterized by rapid absorption and elimination in the body, with elimination half-life of 1.5–1.7 hours. Thus, the frequency of dosing of NT is high, viz. 60-240 mg is administered thrice a day. Additionally, frequent administration of immediate release tablets leads to peak and valley response which is further associated with side effects like hypoglycemia and hepatic impairment 9-12.

The main objective of present study was to develop sustained release matrix (SRM) pellets of Nateglinide with commercially feasible extrusion-spheronization method. Thus, sustained release pellets will not only decrease dosing frequency but will also improve the therapeutic efficacy and safety of Nateglinide for chronic therapy of diabetes. In the present work, SRM pellets were prepared and characterized for their flow properties, particle size and shape image analysis, aspect ratio, friability, Kawakita analysis, FTIR, drug content, In vitro drug release.
MATERIALS AND METHODS:
Materials: Nateglinide was provided by Cipla Ltd., Goa, India as gift sample. Kollidon® SR (K-SR) and Hydrogenated castor oil [Kolliwax HCO (K-HCO)] were received as a gift sample from BASF ltd, India. All the other solvents, reagents and chemicals used were of analytical grade.

Manufacturing of SRM Pellets:
SRM pellets were prepared by extrusion-spheronization method and composition is given in Table 1. Dry-mix was prepared as per formula by mixing NT, microcrystalline cellulose, povidone and polymers in planetary mixer for 10min at slow speed. Appropriate quantity of purified water was added gradually in dry-mix to form cohesive dough. This dough then pressed through an Extruder (UICE LAB, Umang Pharmatech, Mumbai, India) fitted with 1.0 mm screen at 100 RPM. Immediately, extrudates were rotated in Spheronizer (UICE LAB, Umang Pharmatech, Mumbai, India) at a speed of 1500- 2000 rpm for 10-15 min with compressed air supply of 0.5–1.5 bar. Subsequently, the spheronized pellets were dried in a hot air oven at 40⁰ C for 30 min and finally pass through the mesh to achieve desired pellet size of 800μm to 1200μm.

Where, h is the height and r is the radius of the powder cone.

Friability:
The friability of SRM pellets was carried out using Roche Friabilator (EF-1W, Electrolab, India). Accurately weighed 2 g pellets were placed in a friabilator and tumbled for 100 revolutions at 25 rpm. After friability testing, the dust was removed and remaining fraction was weighed. The % friability was calculated with the below equation.

Kawakita analysis:
The flowability and packability of NT and SRM pellets has evaluated by studying Kawakita plot. Bulk density apparatus was used to find out the reduction in volume of pellets after tapping and plot of number of tappings (n) versus degree of volume reduction (n/c) was obtained. The values of constants ‘a’ and ‘b’ were calculated from slope and ‘y’ intercept using following equation16.

Fourier transform infrared spectroscopy (FTIR):
FTIR spectra of Nateglinide, excipients and SRM pellet formulation were recorded using an infrared spectrophotometer (Spectrum Rx1, Perkin Elmer, USA). Approximately 2-3 mg samples were ground and mixed thoroughly with KBr, and the spectra were recorded at a spectral resolution of ± 4 cm–1over a range of 400 to 4000 cm–1.

Drug content:
Accurately weighed 2.0 g SRM pellets were finely crushed in mortar pestle and powder equivalent to 120 mg of NT was extracted in 100 ml methanol with 15 min of sonication on ultrasonicator. The drug content was determined after suitable dilution by UV-VIS spectrophotometer (Lambda 25, Perkin Elmer, USA) at 210 nm. The study was performed in triplicate and result was averaged 17.

In vitro drug release studies:
SRM pellets sample were studied for In vitro drug release studies using USP type I dissolution test apparatus (TDT-08L, Electrolab, India) with speed of 75 RPM at 37°C± 0.5°C. The study was initiated with 900 ml of pH 1.2 buffer as dissolution medium for 2 hours followed by phosphate buffer pH 6.8 till 12 hours. SRM pellets equivalent to 120 mg of NT were placed in the basket and 5 ml aliquots were withdrawn at specific time intervals and same amount of volume was replaced with fresh dissolution medium. The samples were filtered through 0.45 lm membrane filter and analyzed using UV spectrophotometer at λmax of 210 nm. To understand mechanism of drug release, the dissolution data was processed by using PCP disso V3 software (Bharati Vidyapeeth, Poona College of Pharmacy, Pune, India) where zero order, first order, Higuchi’s model and Korsmeyer-Peppas models were applied and correlation coefficient (R) and release exponent (n) were calculated from the slope of straight line 18.

RESULTS AND DISCUSSION:
Pellet size and shape Analysis of SRM pellets:
Particle size analysis revealed that pellet size was observed in the size range of 978-1156 micron and all batches showed comparable particle size irrespective of polymer used. The image analysis was performed to check the influence of the formulation variables on the shape of the pellets and values of aspect ratio, circularity factor, and roundness are shown in Table 2. The pellets shape was observed from dumbbell shape, elongated spheroids to spheroids. The irregular shape was observed for the pellet formulations containing HPMC K4 and HPMC K15 which was improved by addition of K-HCO. On the other hand, formulation containing K-SR showed almost spheroid shaped pellets and further enhancement in the sphericity was noted in the formulation containing K-SR along with K-HCO.

Micromeritics properties of SRM pellets:
The results of flow properties like Angle of repose, Carr’s index, Hausner ratio of various batches of pellet formulations are shown in Table 3. Angle of repose (θ) for the pellets was observed in the range of 18.51° ± 1.1 to 25.13° ± 1.26 which indicated excellent flow properties of SRM pellet formulations. Similarly, values of Carr’s index and Hausner ratio were found in between 12.10 % ± 0.84 to 24.31% ± 0.02 and 1.104 ±0.04 to 1.38 ±0.22 respectively. Carr’s index and Hausner ratio are commonly used parameters to predict flow characteristics and can be correlated with size, shape, surface area and cohesiveness of the substance. Pellets containing K-SR and K-HCO has shown lower values of Carr’s index as well as Hausner ratio and can be attributed to their regular and spherical shape19.Therefore, it is evident that K-HCO can improve the shape and size of K-SR pellets which further showed better micromeritics properties.

0.22 % w/w ± 0.68 to 0.82 % w/w ± 0.84 (Table 3). Highest friability was seen in the F3 formulation in which hard, dumbbell shaped pellets were formed.
Kawakita analysis:
The Kawakita analysis values for NT and SRM pellet formulations are depicted in Table 4. The initial porosity and packability of the powders were represented by ‘a’ and ‘b’ respectively. The maximum value of ‘a’ was observed for pure drug and minimum value was shown by F7 formulation which indicates improved flowability. Whereas ‘b’ value was found to be maximum for F7 which can be attributed to regular spherical shape and good packing characteristics of the formulation 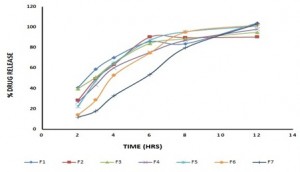 CONCLUSION: A sustained release matrix pellet formulations of Nateglinide were prepared by extrusion spheronization method. It was observed that the formulation comprising of combination of K-SR and K-HCO showed desirable pellets characteristics like micrometrics properties, morphology, and In vitro drug release studies. Thus, preparation of a sustained release matrix pellets of Nateglinide is a promising approach for commercial manufacturing.

ACKNOWLEDGEMENT: Authors are grateful to Cipla Ltd. Goa, India for the gift sample of Nateglinide and BASF ltd, India for gift samples of Kollidon® SR and Kolliwax HCO.

CONFLICT OF INTEREST: The authors report no conflicts of interest.