ABSTRACT: The present study involves the formulation and in-vitro characterization of sustained release matrix tablets of Ambroxol hydrochloride, a potent mucolytic agent used in the treatment of respiratory disorders. FTIR analysis confirmed the absence of drug-polymer interactions. Sustained release matrix tablets containing 75 mg were formulated employing HPMCK15 and xanthan gum as release retarding polymer and dicalcium phosphate and microcrystalline cellulose as diluents. The powder blend was evaluated for micromeritic properties. The matrix tablets were prepared by direct compression technique. The prepared tablets were evaluated for uniformity of weight, hardness, friability, and uniformity of content. All the formulations showed compliance with pharmacopoeial standards. The in-vitro drug release studies were carried out for a period of 12 h using USP type II dissolution apparatus at 50 rpm by taking 900 ml of 0.1 N HCl (pH 1.2) as dissolution medium for first 2 h and later replacing it with 900 ml pH 6.8 phosphate buffer solution for a period of 10 h at 37 ± 0.5 °C.  Among the different combinations of polymers in different ratios studied, the desired in-vitro drug release (97.65% for 12 h) was found with the combination of HPMC K15M and xanthan gum with the drug in the ratio of 1: 0.75 (F7). The drug release from the F7 formulation followed zero order kinetics and mechanism was found to be erosion.

INTRODUCTION: Oral drug delivery has been the most popular and widely utilized route of administration among all the routes for the systemic delivery of drugs via various pharmaceutical products of different dosage forms because of ease of administration, greater flexibility of dosage form design, ease of production and low cost of a system.

The basic goal of therapy is to achieve a steady state blood level that is therapeutically effective and nontoxic for an extended period 1. Among various dosage forms, matrix systems are widely accepted for sustained oral release (SR) as they are simple and easy to formulate.

Hydrophilic matrix system is the release system, where the drug is mixed with a water-swellable, hydrophilic polymer, excipients and compressed into a tablet. Sustained release formulations are preferred because they maintain uniform drug levels, reduce dose and side effects, better patient compliance and increase safety margin for high potency drugs 2. Hydroxypropyl methylcellulose (HPMC) is a semi-synthetic derivative of cellulose, a swellable and hydrophilic polymer 3. It is very suitable to use a retardant material in sustained release matrix tablets, as it is nontoxic and easy to handle. Natural gums are biodegradable and nontoxic, which hydrate and swell on contact with aqueous media. xanthan gum is a high molecular weight extracellular polysaccharide produced by pure culture aerobic fermentation of a carbohydrate with Xanthomonas campestris 4.

Ambroxol hydrochloride is a metabolite of bromhexine and is official in the Martindale Extrapharmacopoeia 5. It is chemically described as Trans-4-[(2-Amino-3, 5-dibromo benzyl) amino] - cyclohexanol. It is widely used as an expectorant and a mucolytic agent used in the treatment of respiratory disorders such as chronic bronchitis and bronchial asthma. Ambroxol hydrochloride is capable of inducing thin copious bronchial secretion 6. It depolymerizes mucopolysaccharides directly as well as by liberating lysosomal enzymes network of fibers in tenacious sputum is broken 7. Ambroxol hydrochloride is sparingly water solubility. Hence, it presents significant formulation challenges. Ambroxol hydrochloride has a half-life of 4 h, and the usual oral dosage regimen is 75 mg. Therefore it is an ideal candidate for design as a sustained release dosage form, which would result in prolonged clinical efficacy, reduced frequency of administration and lesser side effects 8. The main objective of the present work is to develop Ambroxol hydrochloride sustained release matrix tablets using HPMCK15 and Xanthan gum as release retardants.

Drug - Excipient Compatibility Study: FTIR studies were conducted to know the compatibility between drug and excipients. In these studies pure Ambroxol hydrochloride and its mixture with HPMC K15M and xanthan gum were grounded thoroughly with IR grade KBr and then compressed in a hydraulic press at a pressure of 10,000 psig, to get a disc. Each disc was scanned over a range of 400-4000 cm-1 using FTIR instrument (FTIR-1600, Shimadzu, Japan). The characteristic peaks were observed and recorded.

Preparation of Matrix Tablets: Tablets were prepared by direct compression method. All the ingredients listed in Table 1 were accurately weighed and passed through a # 40 sieve. Ambroxol HCl (75 mg) was mixed with various concentrations of polymer and a microcrystalline cellulose or dicalcium phosphate until a homogeneous blend was achieved. Then magnesium stearate and talc were added to the above blend. The flow property of the final blend was found to be satisfactory to allow the mixture to be directly compressed into tablets on a 12- station rotary tablet punching machine (CEMACH Machineries Ltd., India) using 8 mm dome-shaped punches.

In-vitro Drug Release Studies: In-vitro drug release studies were carried out using USP dissolution test apparatus type II Paddle (DBK dissolution testing apparatus, Mumbai, India) at 50 rpm. The dissolution medium consists of 900 ml of pH 1.2 buffer for first two hours and later on pH 6.8 phosphate buffer for a further ten hours. The medium was maintained at 37 ± 0.5 ºC. An aliquot (5 ml) of the solution was collected from the dissolution apparatus hourly and was replaced with fresh dissolution medium. The withdrawn samples were analyzed by an UV-Visible spectrophotometer (Lab India) at 244 nm using (0.1N hydrochloride acid) pH 1.2 buffer or pH 6.8 phosphate buffer as a blank. Aliquots were withdrawn from a zone midway between the surface of dissolution medium and the top of rotating paddle 10.

Kinetics of Drug Release: The kinetics of drug release from the matrix tablets was determined by fitting the appropriate drug release data to zero order, first order, Higuchi equation, Hixson- Crowell equation and the Korsmeyer-Peppas model.

Physicochemical Evaluation of Matrix Tablets: Tablets with a weight of 250 mg were obtained and subjected to quality control tests such as hardness, friability and drug content Table 3. The hardness of the tablets was found to be in the range of 4.82 ± 0.22 to 5.18 ± 0.16 kg/cm2. It was within the range of monograph specification.

F-1, F-2, and F-3 formulations were prepared by using HPMCK15 alone in the ratios of drug: polymer 1:0.75, 1:1 and 1:1.25. Dicalcium phosphate was used as diluents. The Ambroxol hydrochloride release from the tablets was shown in Fig. 3. 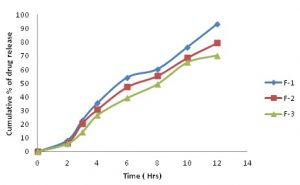 F-4, F-5, and F-6 formulations were prepared by using HPMCK15 and xanthan gum in the ratios of drug: polymer 1:0.75, 1:1 and 1:1.25. dicalcium phosphate was used as diluents. The Ambroxol hydrochloride release from the tablets was shown in Fig. 4. 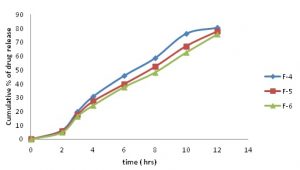 F- 7, F-8 and F-9 formulations were prepared by using HPMCK15 and xanthan gum in the ratios of drug: polymer 1:0.75, 1:1 and 1:1.25. Microcrystalline cellulose was used as diluents. The Ambroxol hydrochloride release from the tablets was shown in Fig. 5. 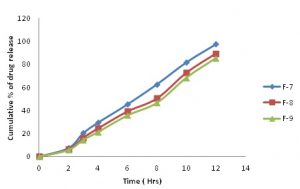 The percentage of drug release from the tablets was observed higher at the end of 12 h from formulations made with microcrystalline cellulose because of its hydrophilic nature.

Determination of the Release Kinetics: The release data were fitted to various mathematical models to evaluate the kinetics and mechanism of drug release. The data of drug release kinetics was shown in Table 3.

CONCLUSION: Ambroxol hydrochloride matrix tablets were successfully prepared by using a direct compression method. From the present study, it was concluded that HPMC K15M, Xanthan gum were compatible with Ambroxol hydrochloride based on the results obtained from compatibility studies and hence are suitable for formulation of sustained release matrix tablet. The cumulative percentage of drug release was decreased with increasing concentration of polymer and hydrophilic diluent, microcrystalline cellulose increase the drug release from the tablets. The mechanism of drug release was erosion.

ACKNOWLEDGEMENT: The authors are thankful to Dr. M. Chinna Eswaraiah, Principal and to the management of Anurag Pharmacy College, Ananthagiri for providing necessary facilities to carry out this work.