ABSTRACT: The aim of the study was to prepare Temozolomide loaded solid lipid nanoparticles and evaluating loaded solid lipid nanoparticles. Temozolomide loaded solid lipid nanoparticles were prepared by micro emulsification method using different lipid (stearic acid) concentration keeping drug concentration unchanged, poloxamer 188 and cetyl alcohol as surfactant and co-surfactant. The prepared SLN were characterized for surface morphology by SEM analysis, drug loading and % entrapment efficiency, FTIR, zeta potential and in vitro diffusion studies. The lowest and highest % Entrapment Efficiency was found to be 85.85% and 97.45% for F1 to F5 batches respectively. Release studies were done by using saline phosphate buffer pH 7.4 using dialysis bag diffusion method. Zeta potential was found to be - 20.3 mV and particle size was found to be 119.34. For 8 hrs in vitro drug release found to be 79.16%, 74.45%, 71.42%, 61.36%, and 55.13% respectively. The release data was analysed by different kinetic models and found that the formulations best fit model is peppas and the drug release mechanism was Fickian diffusion (n-value 0.3808).

INTRODUCTION: Cancer chemotherapy is now established value and highly specialized field and complete re-emission should be the goal of this therapy in which the drugs are often used in maximum tolerated doses. Intensive regimens used earlier yield better results. Cancers were treated with one drug at a time 1. The main problem of cancer therapy is not the lack of efficient drugs, but that these drugs are very difficult to concentrate in the tumour tissue without leading to toxic effects on neighbouring organs or tissues 2. So now days going for targeted drug delivery systems i.e. nanoparticles. The uncontrolled and often rapid proliferation of cells can lead to either a benign or malignant tumor 2, 3.

The main advantage of the study is to provide drug delivery by oral route to the targeted site. SLN are colloidal lipid systems, which have been proposed for several administration routes, such as parenteral, oral and topical. These solid lipid nanopaticles were prepared by different methods as following

Temozolomide: It is an oral alkylating agent which can be used for the treatment of Grade IV astrocytoma an aggressive brain tumor, also known as glioblastoma multiforme as well as Melanoma, a form of skin cancer. It is having protein binding about 15% and having 100% bioavailability, metabolism is spontaneously hydrolyzed at physiologic pH to the active species, 3-methyl -(triazen-1-yl) imidazole-4-carboxomide (MTIC) and to Temozolomide acid metabolite and half life is 1.8 hours 9, 10. The objective of the present research was to study the preparation of loaded solid lipid nanoparticles of Temozolomide by micro-emulsification technique and to study the effects of composition of lipid materials and surfactant mixture on the particle size, zeta potential, drug entrapment efficiency, FTIR, SEM and in vitro drug release.

Materials: Temozolomide, stearic acid from SD fine chem. Limited, Mumbai, poloxamer 188 as a git sample from MSN Laboratories, hyd and cetyl alcohol as gift sample from trident pharmaceuticals, Pondicherry and all other ingredients were analytical grade.

Preformulation Study: The drug-excipient interaction studies were performed by suitably mixing the drug with the chosen additives and stored the mixture for 4 weeks. The drug excipient mixture was evaluated periodically for their physical properties like TLC, FTIR and physical observations and compared with the drug raw material observations. Calibration curve of the drug was estimated in saline phosphate buffer pH 7.4 and the suitably diluted solutions were analyzed by spectro photometrically using double beam UV spectro photometer at 266.8 nm. The estimation was performed in triplicate and the regression co-efficient was derived to ensure the linearity of the calibration curve.

Temozolomide SLN was prepared by micro emulsification technique. Stearic acid was first heated to 75 °C to ensure total melting and then Temozolomide was dispersed in it. Double-distilled water was heated separately (at least 5 °C above the melting point of the lipid). Poloxamer 188 and cetyl alcohol were added to the hot water under constant stirring and allowed to equilibrate. Next, the aqueous surfactant solution was added to the lipid phase while stirring in magnetic stirrer and homogenised at rpm of about 1000 for 2 hrs. The homogenised product represents oil in water emulsion, which on filtering and drying it forms solid lipid nanoparticles.

Fourier Transform Infra-Red Spectroscopy (FT-IR) Analysis: Drug and lipid compatibility was studied by infrared spectroscopy using Avatar Thermo Nicolet FT-IR spectrophotometer. The spectra was recorded in the wavelength region of 400-4000 cm-1 for drug, lipid and Temozolomide, after mixing respective samples with dried KBr powder and compressing to a disc by a hydraulic press at 5 t compression.

Determination of Drug Loading and % Entrapment Efficiency: Equivalent weight of prepared nanoparticles was dissolved in a mixture of methanol and chloroform (5:5). Require dilutions were performed with the same solvent mixture and analyzed in a UV-Visible spectrophotometer at 266.8 nm against the blank.

Evaluation of In vitro Drug Release: In vitro drug release was evaluated by using a dialysis bag diffusion technique. Equivalent weight of nanoparticles were packed in dialysis bag and placed in basket immersed in 900 ml of saline phosphate buffer pH 7.4 as dissolution medium at 37 °C paddle rotating at 75 rpm. An aliquote amount of 5 ml sample was drawn in a time interval of 30, 60, 90,120, 180, 240, 360 and 480 min and replaced with fresh dissolution medium. Dilutions to be done if necessary and absorbance to be recorded at 266.8 nm.

korsmeyer-peppas model and Hixson crowell model were applied to interpret the drug release kinetics from the formulations. Based on the highest regression values (r2) for correlation coefficients for formulations, the best fit model was decided.

Drug Polymer Interaction by FT - IR Analysis: Identification of Temozolomide was done by FTIR. Drug excipient interaction studies showed that there is no any physicochemical interaction between the drug and the selected additives of formulations. The results were shown in Table 2.

Drug Loading and % Entrapment Efficiency: Many different drugs had been incorporated in SLNs. The prerequisite to obtain a sufficient loading capacity was a sufficiently high solubility of the drug in the lipid melt. Relative higher drug EE % was one of the major advantages of SLNs. The drug content in five batches of Temozolomide solid lipid nanoparticles was studied. The amount of drug present in TMZ solid lipid nanoparticles was determined in each batch. Table 3 shows the results of the drug entrapment efficiency in each of these formulations. It was observed that the entrapment efficiency increased with the increase in concentration of lipid in the formulations. The maximum entrapment was found in F-5 of 97.45% and lowest entrapment in F-1 of 85.85%.

Surface morphology was done by using instrument JEOL-JSM-T330A. Magnification was done at 7500- 20000X for taking photographs. Shown in Fig. 2.

From surface morphology studies it was revealed that the nanoparticles were spherical in shape. Surface charge analysis of the TMZ loaded solid lipid nanoparticles was done by Malvern Zetasizer and zeta potential was found to be -20.3mV which indicates they are slightly stable. The Fig. 3 was shown below. 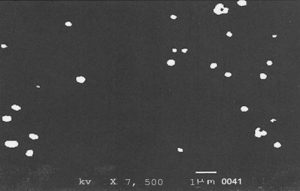 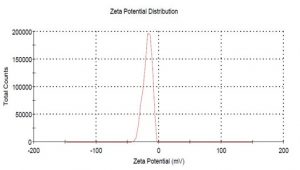 In vitro Drug Release Studies: In vitro release of all batches of Temozolomide loaded SLN (F1-F5) were carried out in saline phosphate buffer pH 7.4 and the formulation showed the release 55.13%, 61.36%, 71.42%, 74.45% and 79.16% respectively at the end of 8 hrs. Among all the formulations F2 showed good controlled release and able to release entire amount in 12 hrs. Therefore it may be considered as the optimized formulation. The dissolution profiles of all the formulations were shown in Fig. 4. 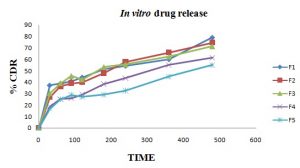 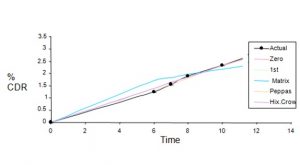