ABSTRACT: Poor aqueous solubility is the main problem in development of effective formulation which affects stability and bioavailability of drug formulation. So there is need of systematic formulation approach to make such poorly soluble drugs bioavailable. In the present investigation attempt has been made to investigate the effect of soluplus on solubility of gliclazide by preparing its nanocrystals. Nanocrystals of gliclazide with soluplus were prepared by using drug: carrier ratios of 1:0.5, 1:1, 1:2, 1:4, 1:6 and 1:8 by anti-solvent precipitation technique. Physiochemical analysis demonstrated the crystalline nature of particles and amongst all formulations 1:2 ratio provided the highest degree of gliclazide solubility i.e., 2.5027±0.77mg/ml as compared to pure drug 0.4918±0.51mg/ml. This increase in solubility may due to increase in surface area and or characteristics of nanocrystals and soluplus. The prepared nanocrystals were characterized by Fourier Transformed Infrared Spectroscopy (FTIR), Differential Scanning Colorimetry (DSC), X-Ray Diffraction pattern (XRD), Scanning Electron Microscopy (SEM). The prepared nanocrystals with highest solubility was formulated into tablet and evaluated for hardness, friability, drug content, disintegration time and in vitro dissolution. The tablet containing nanocrystals found to possess more drug release (88.84%) as compared to tablet containing pure drug (63.03%) and marketed formulation (64.43%).

INTRODUCTION: Diabetes mellitus is a chronic metabolic disorder characterized by high blood glucose level caused by insulin deficiency and it is often combined with insulin resistance, called as hyperglycemia 3. The rapid gastrointestinal tract (GIT) absorption is required for oral hypoglycemic drug, in order to prevent a sudden increase in blood glucose level after lunch of diabetes mellitus patients.

However, gliclazide GI absorption rate, in conventional dosage form like tablet, appears to be rather slow. Several clinical studies revealed that the time to reach peak serum gliclazide concentration ranges from 2 - 8 hours following oral administration of the gliclazide tablet. A slow absorption of drug originates from either poor dissolution of drug from the formulation or poor permeability of drug across the GI membrane 4.

Nanocrystals are particles having size less than 1000 nm. As the particle size of crystals is decreased to about 100 nm there is a severe change in the properties of the material. There is increase in surface area and solubility with decreased size of drug and there is proportionate increase in the bioavailability of feebly water soluble drug (BCS class II and IV) 6. Nanocrystals may be able to reduce the dose to be administered, provide a sustained drug release and increase patient compliance 7.

Preparation of gliclazide nanocrystals: Nano crystals were prepared by anti-solvent precipitation technique. The solvent phase composed of 500 mg of drug dissolved in 10 mL of Dichloromethane. Anti-solvent phase prepared by using 100 ml of distilled water and soluplus 0.25 g, 0.5 g, 1 g, 2 g, 3 g. and 4 g so as to get drug and polymer ratio 1:0.5, 1:1, 1:2, 1:4, 1:6 and 1:8 respectively. Solvent phase added drop wise to anti-solvent phase at flow rate of 1ml per minute with stirring by magnetic stirrer at 1000 -1200 rpm. Resulting dispersion was stirred for 30 min and filtered by Whatman filter paper and kept overnight so as to dry completely. Resulting powder was triturated and pass through sieve no. #170 9.

Solubility of nanocrystals: The solubility was determined by adding excess amount of pure gliclazide and gliclazide nanocrystal formulations to 10 ml distilled water in separate test tube and the mixture was magnetically stirred for 24 hours at 25oC temperature. The supernatant liquid was collected and filtered through Whatman filter paper and analyzed by UV Spectrophotometer at wavelength 226 nm10.

Drug content of nanocrystals: Accurately weighed 10 mg of gliclazide nanocrystals dissolved in 10 mL of distilled water. The resulting solution was sonicated for 3 min and filtered through Whatman filter paper. The filtrate was then diluted suitably with distilled water and gliclazide content was analyzed at 227 nm using UV Spectrophotometer. All the samples were analyzed in triplicate, and the data obtained was expressed as mean values ± SD of three measurements 11.

Fourier - Transform Infrared Spectroscopy: Fourier-transform infrared (FT-IR) spectra were obtained by using an FT-IR spectrometer-430 (Schimadzu, Japan). The samples (gliclazide or Nanocrystals) were previously ground and mixed thoroughly with potassium bromide as ratio of 1:100 (Sample/KBr) in motor and pestle. Resulting mixture placed in sample cell of FT-IR. Forty scans were obtained at a resolution of 4 cm−1, from 4,600 to 300 cm−1 12.

Differential scanning calorimetry (DSC): DSC analysis was conducted to study the thermal behaviors of the samples. To this end, DSC 822e (Mettler Toledo, Switzerland) equipped with a refrigerated cooling system was used and the instrument was calibrated using indium standard. Samples of pure gliclazide and its nanocrystals were placed in aluminum pans sealed with a lid. The crimped aluminum pans were placed inside the DSC and were scanned from 40 to 300 0C at a scanning rate of 100C/min under nitro-gen gas at a flow rate of 80ml/min. To compare the thermal behavior of various samples their onset temperatures, melting points and endothermic and exothermic enthalpies were calculated using the software provided (STAR SW 10.00) 15.

Tablet formulation of gliclazide nanocrystals: The tablets were prepared by direct compression. Nanocrystals and the excipients required for tablet compression are passed through # 60 sieve. Quantities of the drug substance and the excipients are weighed accurately as mentioned in Table 1. The nanocrystal was mixed with the excipients by geometric dilution technique and then it was blended for 10 minutes in motor and pestles to get the uniformity in blend powder. From the above blend, a definite quantity which was equivalent to 40 mg of drug was weighed and compressed in to a tablet by using the single punch tablet compression machine (Karnavati).

In vitro dissolution studies: In vitro dissolution studies of the fabricated formulations and the marketed formulation was performed according to USP apparatus Type II (Electrolab). The 900 ml of pH 7.4 phosphate buffer was used as dissolution media. The tablet containing 40mg (or equivalent to 40mg) of gliclazide was placed in dissolution media maintaining temperature at 370C ± 0.50C and rotation speed of paddle at 50 rpm. About 5ml of aliquot were withdrawn at 5, 10, 15, 20, 25 and 30 minutes and replaced with 5 ml of fresh dissolution medium to maintain the sink condition. Samples were filtered through whatmann filter paper and analyzed spectrophotometrically at 226 nm. 16

Solubility study: Solubility studies were performed to determine the solubility enhancing properties of materials. Solubility studies give the basis for the selection of best ratio of nanocrystals that is to be used for tablet formulation. Nanoparticles of drug with soluplus in various ratios were analyzed for solubility determination. The results as shown in Table 2 depicts that soluplus have very good solubility enhancing property may because of its good surfactant characteristics. Up to certain ratio (1:2) solubility goes increases constantly and further increase in polymer concentration solubility decreases. Studies revealed exponential increase in solubility which is an almost five times more (2.5027mg/ml) as compare to plain drug 0.4918mg/ml. Therefore 1:2 ratio of gliclazide nanocrystal was optimized and used for further formulation development.

FTIR-spectroscopy: The IR spectra of nanocrystals were compared with the standard spectrum of gliclazide Fig. 1 shows that the principle peak values of drug remained unchanged in the soluplus treated nanoparticles indicating the compatibility between drug and polymer. 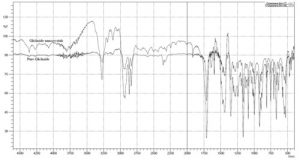 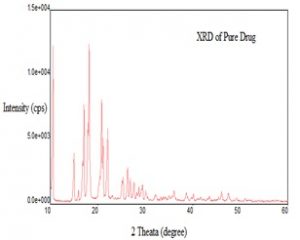 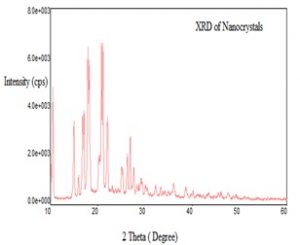 The SEM images Fig. 3 clearly indicates that the shape of gliclazide completely changed in gliclazide nanocrystals showing complex form of gliclazide in soluplus. 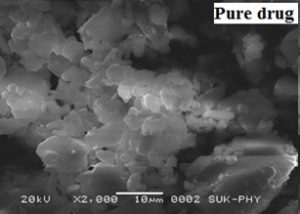 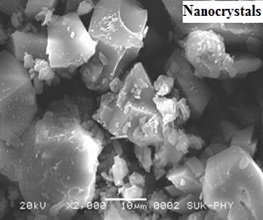 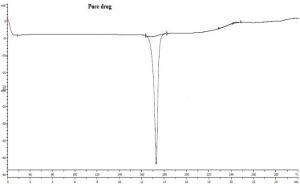 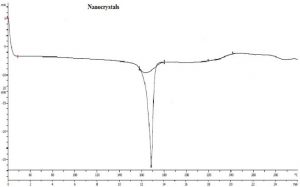 DSC analysis was performed in order to investigate any interaction between gliclazide and soluplus or any changes in polymorphic form during the crystallization process. Fig. 4 shows the DSC traces of gliclazide and obtained nanocrystals and their melting points and enthalpy of fusion. Pure gliclazide sample exhibited an endothermic peak around 170.820C. The presence of soluplus decreased the melting point of gliclazide 167.410C. Small shift in melting point and broadening of peak indicate reduction/conversion of drug to nano crystalline form.

TABLE 3: PHYSICAL PARAMETERS OF THE TABLET

Among all the formulations, NF had shown the highest drug release in the first 15min. Tablets prepared with nanocrystals showed higher drug release as compare to tablets prepared by pure drug and marketed tablet formulation. This increase may be due to decreased particle size, with increased surface area and may also the micellar effect of soluplus. 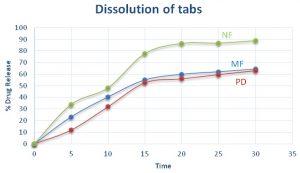 Stability study: Fast dissolving tablet containing gliclazide nanocrystals subjected to stability studies (400C/75%RH). It was found that no major change in parameters such as color, odor, drug content and in-vitro drug release after 30 days of exposure. Hence it can be concluded from the stability data that prepared formulation is stable and not much affected by stress condition.

CONCLUSION: Exponential increase in solubility of prepared gliclazide nanocrystals was observed as compared to pure drug. The percent drug release of tablet containing gliclazide nanocrystals was found to be rapid and more as compared to pure drug and marketed formulation. Also the tablet formulation was found to be stable under stress conditions. Thus it can be concluded that the present method can be used successfully for the preparation of nanocrystals and dosage form development with increased solubility and dissolution with proportionate increase in the bioavailability of feebly water soluble drug.